The paper concerns the optimal upper bounds on the expectations of the kth record values (k >= 1) centered about the sample mean. We consider the case, when the records are based on the infinite sequence of the independent identically distributed random variables, which distribution function is restricted to the family of distributions with the increasing generalized failure rate (IGFR). Such a class can be defined in terms of the convex orders of some distribution functions. Particularly important examples of IGFR class are the distributions with the increasing density (ID) and increasing failure rate (IFR). Presented bounds were obtained with use of the projection method, and are expressed in the scale units based on the standard deviation of the underlying distribution function. 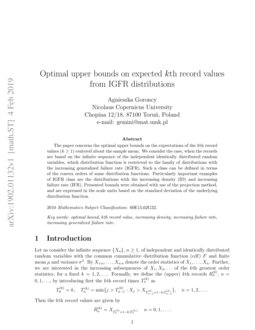 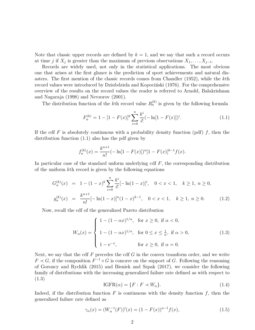 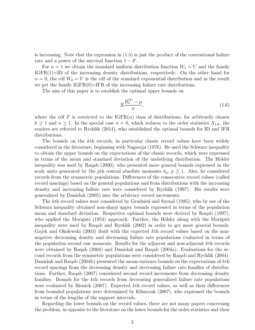 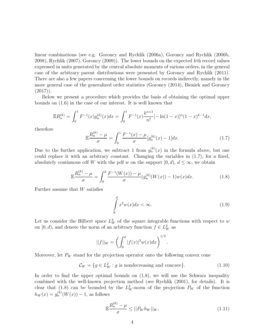 σ2. By X1:n,…,Xn:n denote the order statistics of X1,…,Xn. Further, we are interested in the increasing subsequences of X1,X2,… of the kth greatest order statistics, for a fixed k=1,2,…. Formally, we define the (upper) kth records R(k)n, n=0,1,…, by introducing first the kth record times T(k)n as

Then the kth record values are given by

Note that classic upper records are defined by k=1, and we say that such a record occurs at time j if Xj is greater than the maximum of previous observations X1,…,Xj−1.

Records are widely used, not only in the statistical applications. The most obvious one that arises at the first glance is the prediction of sport achievements and natural disasters. The first mention of the classic records comes from Chandler (1952), while the kth record values were introduced by Dziubdziela and Kopociński (1976). For the comprehensive overview of the results on the record values the reader is referred to Arnold, Balakrishnan and Nagaraja (1998) and Nevzorov (2001).

If the cdf F

is absolutely continuous with a probability density function (pdf)

f, then the distribution function (1.1) also has the pdf given by

In particular case of the standard unform underlying cdf F, the corresponding distribution of the uniform kth record is given by the following equations

Now, recall the cdf of the generalized Pareto distribution

Next, we say that the cdf F precedes the cdf G in the convex transform order, and we write F≺G, if the composition F−1∘G is concave on the support of G. Following the reasoning of Goroncy and Rychlik (2015) and Bieniek and Szpak (2017), we consider the following family of distributions with the increasing generalized failure rate defined as with respect to (???)

Indeed, if the distribution function F is continuous with the density function f, then the generalized failure rate defined as

is increasing. Note that the expression in (???) is just the product of the conventional failure rate and a power of the survival function 1−F.

W1=U and the family IGFR(1)=ID of the increasing density distributions, respectively. On the other hand for α=0, the cdf W0=V

is the cdf of the standard exponential distribution and in the result we get the family IGFR(0)=IFR of the increasing failure rate distributions.

where the cdf F is restricted to the IGFR(α) class of distributions, for arbitrarily chosen k≥1 and n≥1. In the special case n=0, which reduces to the order statistics X1:k, the readers are referred to Rychlik (2014), who established the optimal bounds for ID and IFR distributions.

The bounds on the kth records, in particular classic record values have been widely considered in the literature, beginning with Nagaraja (1978). He used the Schwarz inequality to obtain the upper bounds on the expectations of the classic records, which were expressed in terms of the mean and standard deviation of the underlying distribution. The Hölder inequality was used by Raqab (2000), who presented more general bounds expressed in the scale units generated by the p

σp, p≥1. Also, he considered records from the symmetric populations. Differences of the consecutive record values (called record spacings) based on the general populations and from distributions with the increasing density and increasing failure rate were considered by Rychlik (1997). His results were generalized by Danielak (2005) into the arbitrary record increments.

The kth record values were considered by Grudzień and Szynal (1985), who by use of the Schwarz inequality obtained non-sharp upper bounds expressed in terms of the population mean and standard deviation. Respective optimal bounds were derived by Raqab (1997), who applied the Moriguti (1953) approach. Further, the Hölder along with the Moriguti inequality were used by Raqab and Rychlik (2002) in order to get more general bounds. Gajek and Okolewski (2003) dealt with the expected kth record values based on the non-negative decreasing density and decreasing failure rate populations evaluated in terms of the population second raw moments. Results for the adjacent and non-adjacent kth records were obtained by Raqab (2004) and Danielak and Raqab (2004a). Evaluations for the second records from the symmetric populations were considered by Raqab and Rychlik (2004). Danielak and Raqab (2004b) presented the mean-variance bounds on the expectations of kth record spacings from the decreasing density and decreasing failure rate families of distributions. Further, Raqab (2007) considered second record increments from decreasing density families. Bounds for the kth records from decreasing generalized failure rate populations were evaluated by Bieniek (2007). Expected kth record values, as well as their differences from bounded populations were determined by Klimczak (2007), who expressed the bounds in terms of the lengths of the support intervals.

Below we present a procedure which provides the basis of obtaining the optimal upper bounds on (???) in the case of our interest. It is well known that

Due to the further application, we subtract 1 from g(k)n(x) in the formula above, but one could replace it with an arbitrary constant. Changing the variables in (???), for a fixed, absolutely continuous cdf W with the pdf w on the support [0,d), d≤∞, we obtain

Let us consider the Hilbert space L2W of the square integrable functions with respect to w on [0,d), and denote the norm of an arbitrary function f∈L2W as

Moreover, let PW stand for the projection operator onto the following convex cone

In order to find the upper optimal bounds on (???), we will use the Schwarz inequality combined with the well-known projection method (see Rychlik (2001), for details). It is clear that (???) can be bounded by the L2W-norm of the projection PW of the function hW(x)=g(k)n(W(x))−1, as follows

with the equality attained for cdf F satisfying

In our case we fix W=Wα and the problem of establishing the optimal upper bounds on (???) easily boils down to determining the L2Wα-norm of the projection Pα=PWα of the function hWα onto CWα. Note that in order to apply the projection method, we need the condition (???) to be fulfilled by the distribution function (???). Bieniek (2008) showed, that in that case we need to confine ourselves to parameters α>−12, what we do in our further considerations.

In this section we recall the results of Goroncy and Rychlik (2015, 2016), who determined the projection of the function h∈L2W satisfying particular conditions, onto the cone (???) of nondecreasing and concave functions. These conditions are presented below.

(A) Let h be bounded, twice differentiable function on [0,d), such that

The projection of the function h satisfying conditions (A) onto the convex cone (???) is either first linear, then coinciding with h and ultimately constant, or just linear and then constant, depending on the behaviour on some particular auxiliary functions, which are introduced below.

for 0≤y<d. The precise form of the projection of the function h satisfying (A) onto the cone (???) is described in the proposition below (cf. Goroncy and Rychlik (2016), Proposition 1).

where y∗=inf{y∈Y} is the projection of h onto (???). Otherwise we define

Note that there are only two possible shapes of projection functions of the function h onto (???). The first one requires compliance with certain conditions and can be briefly described as: linear - identical with h - constant (l-h-c, for short). The second possible shape does not have a part which corresponds to the function h, and we will refer to it as l-c (linear and constant) from now on. The original version of this proposition can be found in Goroncy and Rychlik (2015), however there was no clarification about the parameter y in case of the l-c type of the projection, therefore we refer to Goroncy and Rychlik (2016).

We will also need some results on the projection of the functions satisfying conditions (~A), which are a slight modification of conditions (A). We state that the function h satisfies (~A) if conditions (A) are modified so that c=d=∞ and supx>0h(x)=limx→∞h(x)>0. This in general means that the function does not have the decreasing part at the right end of the support and in particular does not have to be bounded from above. The proposition below (cf. Goroncy and Rychlik (2016), Proposition 6) describes the shape of the projection in this case.

Let us focus now on the case W=Wα and denote

It is worth mentioning that slight differences between the lemma above and Lemma 3.2 in Bieniek (2007) are the result of different notations of record values.

and use the variation diminishing property (VDP) of the linear combinations of g(k)n∘Wα (see Gajek and Okolewski, 2003). Other special cases of k,n we calculate separately in order to obtain the shapes of (???).

hα(0)=g(k)n(Wα(0))−1=−1, hα(d)=g(k)n(Wα(d))−1=−1. The value of (???) in the local maximum point c has to be positive, since the function starts and finishes with negative values and integrates to zero, which means that (???) has to cross the x-asis and changes the sign from negative to positive, finishing with negative value at d. Therefore, we can use Proposition 1 in order to obtain the projection of (???) onto (???) and finally determine the desired bounds according to (???). Moreover, (???) satisfy conditions (~A) in case of the first record values (k=1) for α<0, n≥2 and we are entitled to use Proposition 2 then. Other cases can be dealt without the above results. These imply the particular shapes of the projections which can be one of the three possible kinds. The first one coincides with the original function (???) (first values of the classic records for α≤0), the second shape is the linear increasing function (classic record values for n≥1 and α>0 or n≥2 and α=0), and the last one is the projection coinciding with the function h at the beginning and ultimately constant (first values of the kth records for α<0 and k≥2 or α>0, k≥max{2,α2+1}).

In order to simplify the notations, we will denote the projection of function (???) onto (???) with respect to (???) by Pαhα from now on.

3.1 Bounds for the classic records

Proof. Fix k=1. Let us first consider case (i), i.e. α<0. Here we have to add an additional restriction α>−12, which has been mentioned at the end of Section 2. If n=1, then the function hα is increasing and concave, hence its projection onto (???) is the same as hα. The bound can be determined via its norm, which square is given by

An appropriate counterpart of function (???) in our case is

with k=1, since simple calculations show that

where C2α(y) is given in (???). The square root of the expression above determines the optimal bound on (???).

Next, in order to determine the optimal parameter a0, we need to minimize the distance between the function (???) and its projection

The distributions for which the equalities are attained in all the above cases can be determined using the condition (???) with W=Wα and h=hα. □

As soon as we give some auxiliary calculations, we are ready to formulate the results on the upper bounds of the expected kth record values, k≥2 based on the the IGFR(α) family of distributions. For Wα being the GPD distribution, we have the corresponding function of (???) given by