We provide the construction of a set of square matrices whose translates and rotates provide a Parseval frame that is optimal for approximating a given dataset of images. Our approach is based on abstract harmonic analysis techniques. Optimality is considered with respect to the quadratic error of approximation of the images in the dataset with their projection onto a linear subspace that is invariant under translations and rotations. In addition, we provide an elementary and fully self-contained proof of optimality, and the numerical results from datasets of natural images. 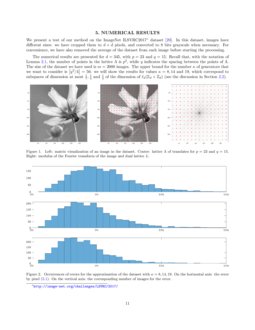 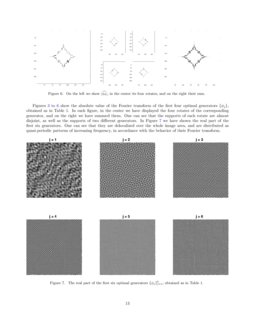 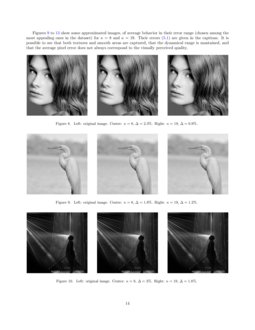 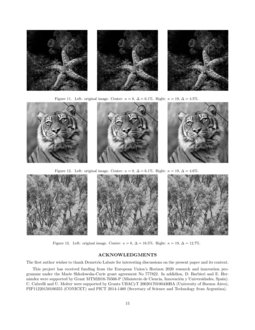 The purpose of this work is to present the theoretical solution, and outline the numerical implementation, for an optimal approximation problem on digital images. The problem is the following: given a dataset of square images, we want to find the optimal generators that provide, by translations and 90 degrees rotations, the best approximation of the dataset with respect to a quadratic error.

We are not considering the full set of all possible translations, which would give rise to a convolutional problem, but rather we consider translations on a lattice. Together with rotations, they will define a nonabelian semidirect product group of discrete Euclidean rigid movements of images.

This work is an adaptation of a result obtained for more general groups in [BCHM2019], which nevertheless can not be directly applied to this setting. Our approach to invariant approximation borrows several ideas from the theory of approximation by shift-invariant spaces developed in [ACHM2007], see also [AT2011, CMP2017]. Noncommutative problems of harmonic analysis related to group actions have a long tradition in signal processing, and recent works with relevant interactions with the present one are [BHP2015, BHP2018, GHP2018, GHI2018].

The presence of invariances in natural images has been long studied and exploited in vision (see [CS2006, B2015, PA2016

] and references therein), and it plays a central role in several approaches to machine learning [

Bekkers2018, AERP2019]. In particular, the solution presented in this work makes use of a special form of a data augmentation, a classical technique now of common use for networks training (see e.g. [DM2001, google2019] and references therein). Our approach differs in a fundamental way from patch-based ones such as [OF1996, AEB2006], because we do not extract patches from images, to be then used by translations, but rather consider entire images, and find the optimal generators for a fixed set of translations and rotations with methods of Fourier analysis.

The structure of this paper is the following. In Section 2 we describe the group invariance, focusing on invariant subspaces, and provide a formal statement of the approximation problem. In Section 3 we introduce an isometric isomophism that allows us to treat the group symmetries with Fourier analysis, and study how invariant subspaces behave under such a map. In Section 4 we provide a formal statement of the proposed solution, and outline the algorithm that allows us to compute it. In Section 5 we finally show the numerical results on a well-known dataset of natural images.

Most of the theoretical results presented in this paper could be deduced, without major difficulties, from the ones obtained in [BCHM2019]. The only obstruction from applying them directly to the present setting is due to the fact that the hypotheses for Proposition 4.1 of [BCHM2019] are not met here due to the presence of certain nontrivial stabilizers for the group action. In Section 3 we overcome this issue by defining an isometry that is slightly different from the one introduced in Section 4.2 of [BCHM2019]. The present setting represents a great simplification of the general case, mainly due to the finiteness of the problem. This gives us the possibility to present a fully self-contained approach to the solution. Indeed, although the arguments used to solve this problem refer to much more general principles, and could be proved with more abstract techniques, in the present case it is possible to provide full proofs of all the results needed to construct the desired approximation with only elementary techniques. We have chosen to do so with the intention of making this work accessible to the non specialist reader, which may be interested in applying this technique.

We will consider grayscale digital images of d×d

pixels, and we will treat here the case of an odd number

d. It is convenient, for the purposes of this work, to consider a digital image f as a function on the square lattice in centered coordinates

i.e. f∈ℓ2(Zd×Zd). This space is Cd2, indexed by Zd×Zd, and endowed with the Euclidean norm, that we denote by ∥⋅∥d, associated to the inner product

In particular, ∥f∥d is the Frobenius norm of f viewed as a matrix.

Note that, for simplicity, we allow ourselves the slight abuse of keeping the same notation Zd×Zd commonly used for {0,…,d}×{0,…,d}. For any n,n′∈Zd×Zd we will also keep the additive notation, and denote always by n+n′∈Zd×Zd the periodic sum

With this operation, Zd×Zd is an abelian group, and 90 degrees rotations, defined by the linear action on Zd×Zd of

Moreover, whenever d is not a prime number, Zd×Zd admits nontrivial proper subgroups for which 90 degrees rotations are also automorphisms of these subgroups. We give a precise statement in the next lemma.

On images, and on every f∈ℓ2(Zd×Zd), the symmetries of translations and rotations are formally described as follows. Let Λ⊂Zd×Zd be a subgroup. For λ=(λ1,λ2)∈Λ, the translation of f by λ, denoted by T(λ)f∈ℓ2(Zd×Zd), is

where r is the 90 degrees rotation of Zd×Zd given by (2.3). For g∈{0,1,2,3} we denote by Rg the g-th power (iteration) of the operator R. The set of operators {T(λ)Rg:λ∈Λ,g∈{0,1,2,3}} define a unitary representation of the nonabelian group Γ=Λ⋊G of discrete Euclidean rigid movements, i.e. Λ-translations and 90 degrees rotations on Zd×Zd. The composition law of Γ can be written as

-orbit of a set of vectors of

ℓ2(Zd×Zd). This is the object of the next definition.

the Γ-invariant linear subspace of ℓ2(Zd×Zd) generated by the action of Γ on Ψ.

Moreover, we want this projection to minimize the quadratic error resulting from the projection onto a Γ-invariant space with κ generators, i.e.

The solution to this problem will be provided in Section 4 together with the construction that allows us to compute an optimal set Φ of Parseval frame generators, given in Table 1.

Fourier duality on Zd×Zd is provided by the DFT:

We will write, for short,

where n.k=n1k1+n2k2. The DFT is a multiple of an invertible isometry: it satisfies

and its inverse reads

It is easy to see by direct computation that the DCT intertwines translations with a phase factor, i.e.

while it commutes with rotations, i.e.

For a subgroup Λ of Zd×Zd, its annihilator is defined by

L is a subgroup of Zd×Zd that plays a special role in Fourier analysis. The next lemma, whose proof is elementary, defines its structure and how it relates with rotations.

The following definition introduces a transform, denoted by TΓ, that is well adapted to perform Fourier analysis on Zd×Zd in the presence of the action of the group Γ. This transform is a variation of the one introduced in Section 4.2 of [BCHM2019].

We provide now a proof of the following result, which also clarifies the role of the map N.

The next lemma shows how the isometry TΓ intertwines the action of Γ.

Proof. Observe first that, since N is only a normalization of the Fourier coefficients on the subgroup L, it commutes with translations: N(T(λ)f)=T(λ)N(f). Thus, for all ℓ∈L

where the second to last identity makes use of the fact that L is the annihilator of Λ and of the invariance of L under rotations. This last fact also implies that N commutes with rotations: RN(f)=N(Rf). Thus

and let us denote by

Then these two subspaces of ℓ2(L) coincide:

The function ω↦SΨ(ω) is a nonabelian variant of an object known in the literature on shift-invariant spaces as range function (see e.g. [Bownik2000, CP2010] and references therein), and, up to a minor change, it corresponds to the map introduced in Definition 4.5 of [BCHM2019]. We note here also that, for the same f∈S(Ψ) used in the previous proof, we can easily compute the g components of TΓ[f](ω). Using Lemma 3.4 and (3.2)