Robotics have recently contributed to cosmological spectroscopy to automatically obtain the map of the observable universe using robotic fiber positioners. For this purpose, an assignment algorithm is required to assign each robotic fiber positioner to a target associated with a particular observation. The assignment process directly impacts on the coordination of robotic fiber positioners to reach their assigned targets. In this paper, we establish an optimal target assignment scheme which simultaneously provides the fastest coordination accompanied with the minimum of colliding scenarios between robotic fiber positioners. In particular, we propose a cost function by whose minimization both of the cited requirements are taken into account in the course of a target assignment process. The applied simulations manifest the improvement of convergence rates using our optimal approach. We show that our algorithm scales the solution in quadratic time in the case of full observations. Additionally, the convergence time and the percentage of the colliding scenarios are also decreased in both supervisory and hybrid coordination strategies. 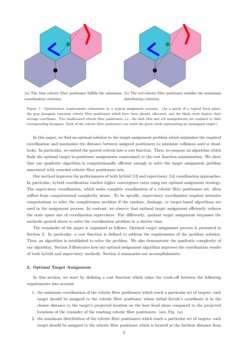 Modern observational astronomy is interested in the study of the dark matter distribution in the universe to investigate its evolution. For this purpose, cosmological spectroscopy has been taken into account to generate the map of the observable universe. In particular, electromagnetic waves emanating from target galaxies are collected using fibers. Then, the received signals are processed using a spectrograph to compute a desired map. The observable universe is about to be divided into specific sets of observations each of which includes a multitude of galaxies. Then, the data obtained from various surveys will generate a unified map depicting the observable universe.

In this paper, we find an optimal solution to the target assignment problem which minimizes the required coordination and maximizes the distance between assigned positioners to minimize collisions and/or deadlocks. In particular, we embed the quoted criteria into a cost function. Then, we propose an algorithm which finds the optimal target-to-positioner assignments constrained to the cost function minimization. We show that our quadratic algorithm is computationally efficient enough to solve the target assignment problem associated with crowded robotic fiber positioners sets.

The remainder of the paper is organized as follows. Optimal target assignment process is presented in Section 2. In particular, a cost function is defined to address the requirements of the problem solution. Then, an algorithm is established to solve the problem. We also demonstrate the quadratic complexity of our algorithm. Section 3 illustrates how our optimal assignment algorithm improves the coordination results of both hybrid and supervisory methods. Section 4 summaries our accomplishments.

In this section, we start by defining a cost function which takes the trade-off between the following requirements into account.

Given a target t, qt represents the projected coordinate of t on the focal plane corresponding to the set of robotic fiber positioners which can observe t. Now we are set to mathematically formulate our requirements. In particular, we take the minimum coordination criterion into account corresponding to a target t by assigning the positioner πi∈iΓPt to it which minimizes the following subfunction555Operator ∥⋅∥2 represents Euclidean norm.

Furthermore, we consider the maximum distribution criterion for a target t by assigning the positioner πi∈iΓPt to it which maximizes the following subfunction

Here J is an index set corresponding to the set of already allocated robotic fiber positioners.

One may note that the maximum distribution criterion is computationally labor-intensive. So, we present a lower bound for this criterion which is computationally more plausible. In particular, let P and t be a set of robotic fiber positioners and a target to be observed, respectively. Denote by ¯¯¯¯¯Q the average coordinate associated with P. According to the extended triangle inequality, we have

Therefore, a lower bound for the maximum distribution criterion, i.e., (4), is

Thus, the overall cost function, the minimization of which simultaneously satisfies the both optimal criteria, is as follows.

In the worst case, we ideally suppose k=n to maximize the information obtained from an observation. It turns out that the complexity is O(n2). Thus, overall computational complexity of the OAS algorithm is quadratic.

In this section666We conduct the tests on a ASUS ZenBook UX410UAR with an Intel Core i7-8550U @ 1.8GHz x 4 processor, Intel UHD Graphics 620 graphic card on an Microsoft Windows 10, 10.0.15063 version., we observe how our optimal target assignment method improves the performance of the overall coordination of robotic fiber positioners set in view of different measures. In particular, we compare what our strategy achieves to those of the target-based assignment, known as one of the most promising available assignment methods up to now. The target distributions are assumed to be random. We performed 50 simulated scenarios per each population of robotic fiber positioners whose overall averages are presented below.

Major parameters of the simulation are specified in the Table 1.

This paper introduces a new method to improve the state-of-the-art target assignment algorithm based on an optimization perspective. In particular, the optimal target assignment takes a cost function into account according to which the distribution density of assigned robotic fiber positioners is locally decreased, thereby less frequent occurrences of deadlocks during coordinations. We also minimize the cost function seeking the target-fiber pairs whose Euclidean distance is as small as possible. Thus, the overall coordination time is minimized. We also show that our optimization algorithm is efficiently scalable in quadratic time. The applied simulations represent the efficiency of the optimal target assignment scheme to improve the performances of both the hybrid and the supervisory coordination techniques.