We reformulate Pratt's tableau decision procedure of checking satisfiability of a set of formulas in PDL. Our formulation is simpler and more direct for implementation. Extending the method we give the first EXPTIME (optimal) tableau decision procedure not based on transformation for checking consistency of an ABox w.r.t. a TBox in PDL (here, PDL is treated as a description logic). We also prove the new result that the data complexity of the instance checking problem in PDL is coNP-complete. 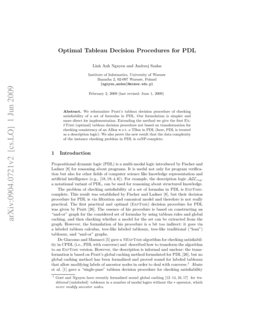 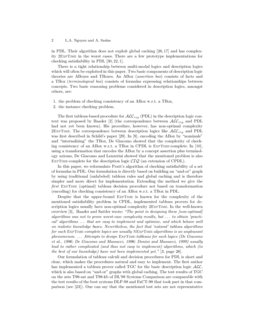 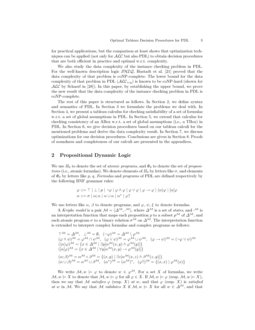 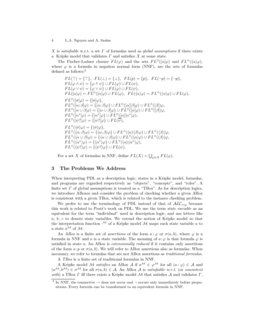 Complexity of the Description Logic ALCM

In this paper we show that the problem of checking consistency of a know...
Monica Martinez, et al. ∙

Problem Formulation as the Reduction of a Decision Model

In this paper, we extend the QMRDT probabilistic model for the domain of...
David Heckerman, et al. ∙

for reasoning about programs. It is useful not only for program verification but also for other fields of computer science like knowledge representation and artificial intelligence (e.g.,

[HalpernMoses92, HKT00, handbook-AR-2001, ddks2007]). For example, the description logic ALCreg, a notational variant of PDL, can be used for reasoning about structured knowledge.

The problem of checking satisfiability of a set of formulas in PDL is ExpTime-complete. This result was established by Fischer and Ladner [FischerLadner79], but their decision procedure for PDL is via filtration and canonical model and therefore is not really practical. The first practical and optimal (ExpTime) decision procedure for PDL was given by Pratt [Pratt80]. The essence of his procedure is based on constructing an “and-or” graph for the considered set of formulas by using tableau rules and global caching, and then checking whether a model for the set can be extracted from the graph. However, the formulation of his procedure is a bit too indirect: it goes via a labeled tableau calculus, tree-like labeled tableaux, tree-like traditional (“lean”) tableaux, and “and-or” graphs.

De Giacomo and Massacci [de-giacomo-massacci-converse-pdl] gave a NExpTime algorithm for checking satisfiability in CPDL (i.e., PDL with converse) and described how to transform the algorithm to an ExpTime version. However, the description is informal and unclear: the transformation is based on Pratt’s global caching method formulated for PDL [Pratt80], but no global caching method has been formalized and proved sound for labeled tableaux that allow modifying labels of ancestor nodes in order to deal with converse.111Goré and Nguyen have recently formalized sound global caching [GoreNguyen05tab, GoreNguyenDL07, GoreNguyenTab07, GoreNguyen07clima, GoreNguyen08CSP] for traditional (unlabeled) tableaux in a number of modal logics without the ∗ operator, which never modify ancestor nodes. Abate et al. [AbateGW07] gave a “single-pass” tableau decision procedure for checking satisfiability in PDL. Their algorithm does not exploit global caching [Pratt80, GoreNguyen08CSP] and has complexity 2ExpTime in the worst cases. There are a few prototype implementations for checking satisfiability in PDL [SchmidtPDLtab, LoTREC, AbateGW07].

The first tableau-based procedure for ALCreg (PDL) in the description logic context was proposed by Baader [ijcai-Baader91] (the correspondence between ALCreg and PDL had not yet been known). His procedure, however, has non-optimal complexity 2ExpTime. The correspondence between description logics like ALCreg and PDL was first described in Schild’s paper [Schild91]. In [DeGiacomoThesis], encoding the ABox by “nominals” and “internalizing” the TBox, De Giacomo showed that the complexity of checking consistency of an ABox w.r.t. a TBox in CPDL is ExpTime-complete. In [GiacomoL96], using a transformation that encodes the ABox by a concept assertion plus terminology axioms, De Giacomo and Lenzerini showed that the mentioned problem is also ExpTime-complete for the description logic CIQ (an extension of CPDL).

In this paper, we reformulate Pratt’s algorithm of checking satisfiability of a set of formulas in PDL. Our formulation is directly based on building an “and-or” graph by using traditional (unlabeled) tableau rules and global caching and is therefore simpler and more direct for implementation. Extending the method we give the first ExpTime (optimal) tableau decision procedure not based on transformation (encoding) for checking consistency of an ABox w.r.t. a TBox in PDL.

Despite that the upper-bound ExpTime is known for the complexity of the mentioned satisfiability problem in CPDL, implemented tableau provers for description logics usually have non-optimal complexity 2ExpTime. In the well-known overview [BaaderSattler01], Baader and Sattler wrote: “The point in designing these [non-optimal] algorithms was not to prove worst-case complexity results, but … to obtain ‘practical’ algorithms … that are easy to implement and optimise, and which behave well on realistic knowledge bases. Nevertheless, the fact that ‘natural’ tableau algorithms for such ExpTime-complete logics are usually NExpTime-algorithms is an unpleasant phenomenon. … Attempts to design ExpTime-tableaux for such logics (De Giacomo et al., 1996; De Giacomo and Massacci, 1996; Donini and Massacci, 1999) usually lead to rather complicated (and thus not easy to implement) algorithms, which (to the best of our knowledge) have not been implemented yet.” [BaaderSattler01, page 26].

Our formulation of tableau calculi and decision procedures for PDL is short and clear, which makes the procedures natural and easy to implement. The first author has implemented a tableau prover called TGC for the basic description logic ALC, which is also based on “and-or” graphs with global caching. The test results of TGC on the sets T98-sat and T98-kb of DL’98 Systems Comparison are comparable with the test results of the best systems DLP-98 and FaCT-98 that took part in that comparison (see [Nguyen08CSP-FI]). One can say that the mentioned test sets are not representative for practical applications, but the comparison at least shows that optimization techniques can be applied (not only for ALC but also PDL) to obtain decision procedures that are both efficient in practice and optimal w.r.t. complexity.

We use letters like α, β to denote programs, and φ, ψ, ξ to denote formulas.

We write M,w⊨φ to denote w∈φM. For a set X of formulas, we write M,w⊨X to denote that M,w⊨φ for all φ∈X. If M,w⊨φ (resp. M,w⊨X), then we say that M satisfies φ (resp. X) at w, and that φ (resp. X) is satisfied at w in M. We say that M validates X if M,w⊨X for all w∈ΔM, and that X is satisfiable w.r.t. a set Γ of formulas used as global assumptions if there exists a  Kripke model that validates Γ and satisfies X at some state.

The Fischer-Ladner closure FL(φ) and the sets FL□([α]φ) and FL◊(⟨α⟩φ), where φ is a formula in negation normal form (NNF), are the sets of formulas defined as follows:222In NNF, the connective → does not occur and ¬ occurs only immediately before propositions. Every formula can be transformed to an equivalent formula in NNF.

3 The Problems We Address

When interpreting PDL as a description logic, states in a Kripke model, formulas, and programs are regarded respectively as “objects”, “concepts”, and “roles”. A finite set Γ of global assumptions is treated as a “TBox”. As for description logics, we introduce ABoxes and consider the problem of checking whether a given ABox is consistent with a given TBox, which is related to the instance checking problem.

A TBox is a finite set of traditional formulas in NNF.

The first problem we address is the problem of checking satisfiability of an ABox w.r.t. a TBox

Consider the use of PDL as a description logic. A pair (A,Γ) of an ABox A and a TBox Γ is treated as a knowledge base. A Kripke model that satisfies A and validates Γ is called a model of (A,Γ). Given a (traditional) formula φ (treated as a “concept”) and a state variable a (treated as an “individual”), the problem of checking whether aM∈φM in every model M of (A,Γ) is called the instance checking problem (in PDL).

The second problem considered in this paper is the instance checking problem. The condition to check is denoted in such cases by (A,Γ)⊨φ(a).

4 A Tableau Calculus for PDL

In this section, we do not consider ABoxes yet, and by a “formula” we mean a “traditional formula”. Let X and Γ be finite sets of formulas. Consider the problem of checking whether X is satisfiable in PDL w.r.t. the set Γ of global assumptions. We assume that formulas are represented in NNF. We write ¯¯¯¯φ to denote the NNF of ¬φ.

Our calculus CPDL will be specified as a finite set of tableau rules, which are used to expand nodes of “and-or” graphs. A tableau rule is specified with the following informations:

We use Y to denote a set of formulas, and write Y,φ for Y∪{φ}.

Define tableau calculus CPDL w.r.t. a set Γ of global assumptions to be the set of the tableau rules given in Table 1. The rule (trans) is the only “and”-rule and the only transitional rule. Instantiating this rule, for example, to Y={⟨σ⟩p,⟨σ⟩q,[σ]r} and Γ={s} we get two conclusions: {p,r,s} and {q,r,s}. The other rules of CPDL are “or”-rules, which are also called static rules.444Unary static rules can be treated either as “and”-rules or as “or”-rules. In [GoreNguyen08CSP], the rules (⊥0) and (⊥)

An “and-or” graph for (X,Γ), also called a tableau for (X,Γ), is an “and-or” graph defined as follows. The initial node ν of the graph, called the root of the graph, is specified by L(ν)=X∪Γ and rfs(ν)=∅. For every node v of the graph, if a tableau rule of CPDL is applicable to the label of v in the sense that an instance of the rule has L(v) as the premise and Z1, …, Zk as the possible conclusions, then choose such a rule accordingly to the preference555If there are several applicable rules with the same priority, choose any one of them. and apply it to v to create k successors w1,…,wk of v with L(wi)=Zi for 1≤i≤k. If the graph already contains a node w′i with the same contents as wi then instead of creating a new node wi as a successor of v we just connect v to w′i and assume wi=w′i. If the applied rule is (trans) then we label the edge (v,wi) by the principal formula corresponding to the successor wi. If the rule expanding v is an “or”-rule then v is an “or”-node, else v is an “and”-node. The information about which rule is applied to v is recorded for later uses. If no rule is applicable to v then v is an end node. Note that each node is “expanded” only once (using one rule). Also note that the graph is constructed using global caching [Pratt80, GoreNguyenTab07, GoreNguyen08CSP] and the contents of its nodes are unique.

A marking of an “and-or” graph G is a subgraph G′ of G such that:

G′ does not contain any node with label {⊥};

for every node v of G′, every formula of the form ⟨α⟩φ of the label of v has a ◊-realization (starting at v) in G′.

Theorem 4.1 (Soundness and Completeness of CPDL)

Let X and Γ be finite sets of formulas in NNF, and G be an “and-or” graph for (X,Γ). Then X is satisfiable w.r.t. the set Γ of global assumptions iff G has a consistent marking. ⊲