Optimal Strategies for Matching and Retrieval Problems by Comparing Covariates

In many retrieval problems, where we must retrieve one or more entries from a gallery in response to a probe, it is common practice to learn to do by directly comparing the probe and gallery entries to one another. In many situations the gallery and probe have common covariates -- external variables that are common to both. In principle it is possible to perform the retrieval based merely on these covariates. The process, however, becomes gated by our ability to recognize the covariates for the probe and gallery entries correctly. In this paper we analyze optimal strategies for retrieval based only on matching covariates, when the recognition of the covariates is itself inaccurate. We investigate multiple problems: recovering one item from a gallery of N entries, matching pairs of instances, and retrieval from large collections. We verify our analytical formulae through experiments to verify their correctness in practical settings. 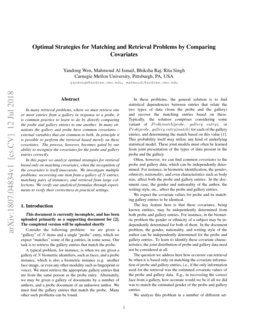 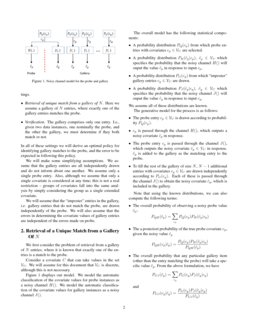 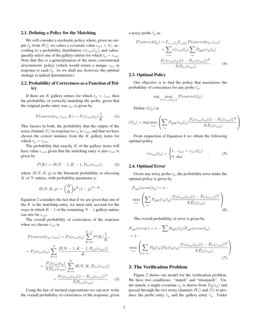 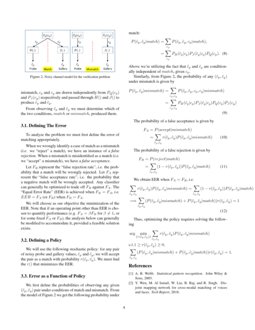 This document is currently incomplete, and has been uploaded primarily as a supporting document for [2]. The completed version will be uploaded shortly

Consider the following problem: we are given a “gallery” of N items and a single “probe” entry, which we expect “matches” some of the g entries, in some sense. Our task is to retrieve the gallery entries that match the probe.

A typical problem, for instance, is when we are given a gallery of N biometric identifiers, such as faces, and a probe instance, which is also a biometric instance (e.g. another face image, or even any other modality such as fingerprint or voice). We must retrieve the appropriate gallery entries that are from the same person as the probe entry. Alternately, we may be given a gallery of documents by a number of authors, and a probe document of an unknown author. We must find the gallery entries that match the probe. Many other such problems can be found.

. This probability itself may utilize any kind of underlying statistical model. These joint models must often be learned from joint presentation of the types of data present in the probe and the gallery.

We expect the covariate values for probe and its matching gallery entries to be identical.

The question we address here how accurate

We analyze this problem in a number of different settings.

In all of these settings we will derive an optimal policy for identifying gallery matches to the probe, and the error to be expected in following this policy.

We will make some simplifying assumptions. We assume that the gallery entries are all independently drawn and do not inform about one another. We assume only a single probe entry. Also, although we assume that only a single covariate is considered at any time; this is not a real restriction – groups of covariates fall into the same analysis by simply considering the group as a single extended covariate.

2 Retrieval of a Unique Match from a Gallery Of N

We first consider the problem of retrieval from a gallery of N entries, where it is known that exactly one of the entries is a match to the probe.

Consider a covariate C that can take values in the set VC. We will assume for this document that VC is discrete, although this is not necessary.

The overall model has the following statistical components:

We assume all of these distributions are known.

The generative model for the process is as follows:

Note that using the known distributions, we can also compute the following terms:

We will consider a stochastic policy where, given an output ~cp from H(), we select a covariate value csel∈VC according to a probability distribution r(csel|~cp), and subsequently select one of the gallery entries for which ~cg=csel. Note that this is a generalization of the more conventional deterministic policy (which would return a unique csel in response to each ~cp. As we shall see, however, the optimal strategy is indeed deterministic).

If there are K gallery entries for which ~cg=csel, then the probability of correctly matching the probe, given that the original probe entry was cp, is given by

This factors in both, the probability that the output of the noisy channel J() in response to cp is csel, and that we have chosen the correct instance from the K gallery items for which ~cg=csel.

The probability that exactly K of the gallery items will have value csel, given that the matching entry is also csel is given by

where B(N,K,p) is the binomial probability or choosing K of N entries, with probability parameter p:

Equation 2 considers the fact that if we are given that one of the K is the matching entry, we must only account for the ways in which K−1 of the remaining N−1 gallery entries can also be csel.

Using the law of iterated expectations we can now write the overall probability of correctness of the response, given a noisy probe ~cp as

Our objective is to find the policy that maximizes the probability of correctness for any probe ~cp:

From inspection of Equation 4 we obtain the following optimal policy.

Given any noisy probe ~cp, the probability error under the optimal policy is given by

The overall probability of error is given by

Figure 2 shows our model for the verification problem. We have two conditions: “match” and “mismatch”. Under match, a single covariate cp is drawn from PQ(cp) and passed through the two noisy channels H() and J() to produce the probe entry ~cp and the gallery entry ~cg. Under mismatch, cp and cg are drawn independently from PQ(cp) and PJ(cg) respectively and passed through H() and J() to produce ~cp and ~cg.

From observing ~cp and ~cg we must determine which of the two conditions, match or mismatch, produced them.

To analyze the problem we must first define the error of matching apporpriately.

Let FR represent the “false rejection rate”, i.e. the probability that a match will be wrongly rejected. Let FA

represent the “false acceptance rate”, i.e. the probability that a negative match will be wrongly accepted. Any classifier can generally be optimized to trade off

We will choose as our objective the minimization of the EER. Note that if an operating point other than EER is chosen to quantify performance (e.g. FA=βFR for β≠1, or for some fixed FA or FR), the analysis below can generally be modified to accommodate it, provided a feasible solution exists.

We will use the following stochastic policy: for any pair of noisy probe and gallery values, ~cp and ~cg, we will accept the pair as a match with probability r(~cp,~cg). We must find the r() that minimizes the EER.

We first define the probabilities of observing any given (~cp,~cg) pair under conditions of match and mismatch. From the model of Figure 2 we get the following probability under match:

Above we’re utilizing the fact that ~cp and ~cg are conditionally independent of match, given cp.

Similarly, from Figure 2, the probability of any (~cp,~cg) under mismatch is given by

The probability of a false acceptance is given by

The probability of a false rejection is given by

We obtain EER when FA=FR, i.e.