This paper considers the change-point problem for finite sequences of networks. To avoid the difficulty of computing the normalization coefficient, such as in Exponential random graphical models (ERGMs) and Markov networks, we construct a finite measure space with measure ratio statistics. A new performance measure of detection delay is proposed to detect the changes in distribution of the network. And an optimal sequential test is proposed under the performance measure. The good performance of the optimal sequential test is illustrated numerically on ERGMs and Erdos-Rényi network sequences. 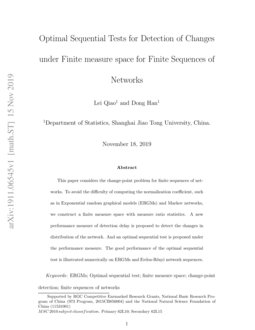 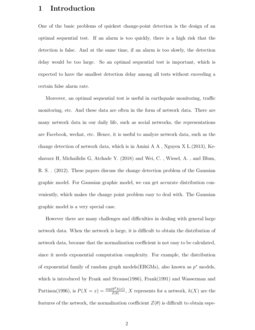 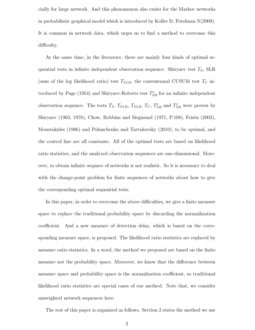 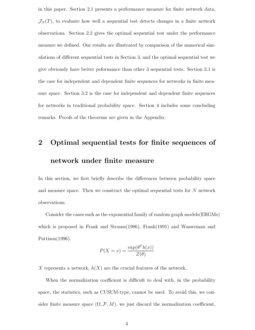 The aim of online monitoring is to issue an alarm as soon as there is si...
Mark Holmes, et al. ∙

One of the basic problems of quickest change-point detection is the design of an optimal sequential test. If an alarm is too quickly, there is a high risk that the detection is false. And at the same time, if an alarm is too slowly, the detection delay would be too large. So an optimal sequential test is important, which is expected to have the smallest detection delay among all tests without exceeding a certain false alarm rate.

However there are many challenges and difficulties in dealing with general large network data. When the network is large, it is difficult to obtain the distribution of network data, because that the normalization coefficient is not easy to be calculated, since it needs exponential computation complexity. For example, the distribution of exponential family of random graph models(ERGMs), also known as p∗ models, which is introduced by Frank and Strauss(1986), Frank(1991) and Wasserman and Pattison(1996), is P(X=x)=exp(θTh(x))Z(θ), X represents for a network, h(X) are the features of the network, the normalization coefficient Z(θ) is difficult to obtain especially for large network. And this phenomenon also exsits for the Markov networks in probabilistic graphical model which is introduced by Koller D, Friedman N(2009). It is common in network data, which urges us to find a method to overcome this difficulty.

At the same time, in the literature, there are mainly four kinds of optimal sequential tests in infinite independent observation sequence: Shiryaev test TS, SLR (sum of the log likelihood ratio) test TSLR, the conventional CUSUM test TC introduced by Page (1954) and Shiryaev-Roberts test TrSR for an infinite independent observation sequence. The tests TS, TSLR, TSLR, TC, TrSR and TrSR were proven by Shiryaev (1963, 1978), Chow, Robbins and Siegmund (1971, P.108), Frisén (2003), Moustakides (1986) and Polunchenko and Tartakovsky (2010), to be optimal, and the control line are all constants. All of the optimal tests are based on likelihood ratio statistics, and the analyzed observation sequences are one-dimensional. Moreover, to obtain infinite sequnce of networks is not realistic. So it is necessary to deal with the change-point problem for finite sequences of networks about how to give the corresponding optimal sequential tests.

In this section, we first briefly describe the differences between probability space and measure space. Then we construct the optimal sequential tests for N network observations.

Consider the cases such as the exponential family of random graph models(ERGMs) which is proposed in Frank and Strauss(1986), Frank(1991) and Wasserman and Pattison(1996).

X represents a network, h(X) are the crucial features of the network.

Moreover, in this paper, we consider unweighted network sequences. The joint meansure density function is similar. Suppose that there are finite dependent network observations, denoted by {Xk,0≤k≤N}. Then let d denotes the number of nodes in each network observation. In this paper, we consider the change-point problem for network sequences as follows

Let τ=k (1≤k≤N) be the change-point time, then the joint measure density function mk can be written as

where m0j(Xj|Xj−1,...,X0) and m1j(Xj|Xj−1,...,X0) are respectively the pre-change and the post-change conditional measure densities of the j-th observation Xj for 1≤j≤n. When τ=k>N, i.e., a change never occurs in N observations X1,X2,...,XN. And the corresponding joint measure function is denoted by Mk.

There are some different performance measures for sequential test in Shiryaev (1963, 1978), Chow, Robbins and Siegmund (1971, P.108), Frisén (2003), Moustakides (1986) and Polunchenko and Tartakovsky (2010). These performance measures relate to the probability distribution

Pk and the probability expectation Ek in probability space. So in finite measure space, we also have Mk and MEk when the change-point time τ=k (1≤k≤N).

is the finite measure expectation, which is a first order moment based on joint measure density function. That is

where Mk is the joint measure when τ=k≤N.

Futhermore, ME0 denotes the measure expectation with the pre-change joint measure density m0(x0,x1,...,xN).

It is easy to known that the measure expectations MEk have the similar properties as in probability space.

Let T∈TN be a sequential test, the definition is

where Λk=m1k(Xk|Xk−1,...,X0)m0k(Xk|Xk−1,...,X0), TN is a set of all of the sequential tests satisfying 1≤T≤N+1 and {T≤n}∈Fn=σ{Xk,0≤k≤n} for 1≤n≤N. Following the idea of the randomization probability of the change time and the definition of describing the average detection delay proposed by Moustakides (2008), we define a performance measure JN(.), which is based on measure expectations, to evaluate the detection performance of each sequential test T∈TN in the following

For the CUSUM test statistics, which is widely used in quality detection. Moreover, it is simple, which is as follows

The performance measure in (2), (T−k)+ denotes the detection delay. Note that Yk=Λk when Yk−1<1, or, (1−Yk−1)+>0, that is, we will newly detect the change of network starting from k. So it is reasonable to let the weight of the detection delay as wk=(1−Yk−1)+. At the same time, if we set the weight vk=1, then the numerator and denominator of the meansure JN(T) in (2) can be regarded as the generalized out-of-control average run length (ARL1) and in-control average run length (ARL0). For the numrical simulation in Section 3, we choose the CUSUM test statistics with wk=(1−Yk−1)+,vk=1.

Before giving the optimal sequential test, we need to show the corresponding conditional measure expectations w.r.t. Mk, 0≤k≤N, which is similar as in probability space. More details are as follow:

be an integrable random variable on

(Ω,F,M). Let A be a sub-σ-field of F. The conditional measure expectation of ξ given A under measure Mk, denoted by MEk(ξ|A), is the a.s.-unique random variable satisfying the following two conditions:

It is easy to obtain that the conditional measure expectations MEk(⋅|A) have the similar properties as in probability space. In the proofs of theorems, we need to use these properties.

Motivated by Chow, Robbins and Siegmund (1971) we present a nonnegative random dynamic control limit {lk(c),0≤k≤N+1} that is defined by the following recursive equations

Now, by using the test statistics Yn,1≤n≤N+1, and the control limits lk(c),1≤k≤N+1, we define a sequential test T∗(c,N) as follows

The following theorem shows that the sequential test T∗(c,N) is optimal under the measure JN(T).

From Theorem 1 we know that for every measure JN(T) corresponding to the weights wk,vk, we can construct an optimal control chart T∗(c,N) under the measure JN(T).

Note that the optimal control limit lk(c) depends on the sequence of networks, X0,X1,...,Xk for 0≤k≤N. We let the sequence of networks {Xk,0≤k≤N} be at most a p-order Markov process; that is, both the pre-change network observations X0,X1,...,Xk−1 and the post-change network observations Xk,...,XN are i-order and j-order Markov processes with transition measure density functions m0n(xn|xn−1,...,xn−i) and m1m(xm|xm−1,...,xm−j), respectively, where p=max{i,j} and

for i≤n and j≤m. We known that p=0, means that the sequence of networks are mutually independent.

3 Comparison and analysis of simulation results

Suppose that there is a finite sequence of network and N=60. In section 3.1, under finite measure space, we first give an example for independent samples condition by comparing four different sequential tests, Tcons with constant control limits, Tde with linear decrease control limits, Tin with linear increase control limits, and T∗(c) with optimal control limits lk which is defined in this paper. Then we give an example for dependent samples condition, which is 1-order Markov process and we also compare the four different sequential tests. All of the above is based on CUSUM-type statistics and the number of nodes d=10.

Note that traditional probability space is a special case, so when the normalization coefficient is computable for a network distribution, then we can use the probability space, we also give examples in Section 3.2 about independent and dependent Erdos-Rényi network sequences.

Moreover, in simulation, the performance measure JN(T) with wk=(1−Yk−1)+ and vk=1 for 1≤k≤N. And note that ME is proportitional to E, the ratio is fixed and unknown. For any test T, E(T)

is easily estimated by sample mean through simulation. So in the third column of tables, we replace

The explanation of the simulation results is at the end of this section.

There are many terms in ERGMs and many linear combination of these terms. The example we give is the simplest. The ratio Λk of the pre-change and post-change measure density functions m0(x) and m1(x) is

for 1≤k≤60. We compare the performance of four tests, the first one is Tcons with constant control limits

The second test, Tde denotes a test with decrease control lmits as follows

And Tin denotes a test with increase control lmits as follows

The simulation result for independent finite ERGM network observations is shown in Table 1. All of the results are based on 105 repititions.

for 1≤k≤60. We compare the performance of four tests, which the same as indenpendent case above.

The simulation result of dependent finite ERGM network observations is shown in Table 2. All of the results are based on 104 repititions.

3.3 Comparison of simulation of indepedent network observations in probability space

The second test, Tde denotes a test with decrease control lmits as follows

And Tin denotes a test with increase control lmits as follows

The simulation result of independent finite Erdos-Rényi network observations is shown in Table 3. All of the results are based on 105 repititions.

3.4 Comparison of simulation of depedent network observations in probability space

The simulation result of dependent finite Erdos-Rényi network observations is shown in Table 4. All of the results are based on 104 repititions.

Next, we give a explanation about the numerical simulation results in the above four tables. The fist two tables are for general independent and dependent ERGMs. The last two tables are for specific Erdos-Rényi random networks. The first column shows that we compare four different sequential tests, the adjustment coefficient is shown in the second column to guarantee that ME0(⋅)≈γ, in tables we use E0(⋅) to replace it. The fourth column is the focus of our attention, the smallest of JN(T), the better of the sequential test. We find that the optimal sequential tests in four tables all have the smallest JN(T), which is consistent with Theorem 1. Note that the method in this paper can be applied in many networks, as long as we know the distribution of the networks either in probability space or in general finite measure space. Futher, the sequence of networks in Section 3.2 and Section 3.4 can be p-order, while in simulation we choose 1-order networks. And in simulation, we try to make sure E0(⋅)≈40, but in Table 1 and Table 3, for the constant control limits, E0(⋅)=41.8339,41.3517, that’s because if we adjust the constant c a little bit, the corresponding E0(⋅) is far from 40. There are many different control limits, in this paper we choose relatively representative control limits.

For the ERGMs models, and probabilistic graphical models, the normalization coefficient is difficult to compute, there are many method to approximate them, which needs complexty computations. We choose a finite measure to define corresponding measure ratio statistics for sequential test problem is a method to solve the difficulty. Measure ratio statistics can also show the difference between pre-change and post-change distribution. And we can also give optimal sequential test under finite measure. All of the definition about finite measure space comes from Shao, J. (2003).