Ambient backscatter communication (AmBC) enables wireless-powered backscatter devices (BDs) to transmit information over ambient radio-frequency (RF) carriers without using an RF transmitter, and thus has emerged as a promising technology for green Internet-of-Things. This paper considers an AmBC network in which a full-duplex access point (FAP) simultaneously transmits downlink orthogonal frequency division multiplexing (OFDM) signals to its legacy user (LU) and receives uplink signals backscattered from multiple BDs in a time-division-multiple-access manner. To enhance the system performance from multiple design dimensions and ensure fairness, we maximize the minimum throughput among all BDs by jointly optimizing the BDs' backscatter time portions, the BDs' power reflection coefficients, and the FAP's subcarrier power allocation, subject to the LU's throughput constraint, the BDs' harvested-energy constraints, and other practical constraints. As such, we propose an efficient iterative algorithm for solving the formulated non-convex problem by leveraging the block coordinated decent and successive convex optimization techniques. We further show the convergence of the proposed algorithm, and analyze its complexity. Finally, extensive simulation results show that the proposed joint design achieves significant throughput gains as compared to the benchmark scheme with equal resource allocation. 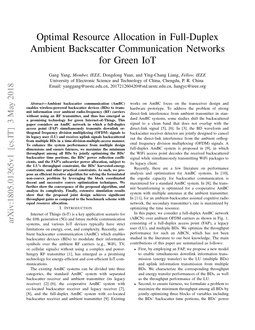 Internet of Things (IoT) is a key application scenario for the fifth generation (5G) and future mobile communication systems, and various IoT devices typically have strict limitations on energy, cost, and complexity. Recently, ambient backscatter communication (AmBC) which enables backscatter devices (BDs) to modulate their information symbols over the ambient RF carriers (e.g., WiFi, TV, or cellular signals) without using a complex and power-hungry RF transmitter [1], has emerged as a promising technology for energy-efficient and cost-efficient IoT communications.

Recently, there are a few literature on performance analysis and optimization for AmBC systems. In [10], the ergodic capacity for backscatter communication is maximized for a standard AmBC system. In [8], the transmit beamforming is optimized for a cooperative AmBC system with multiple antennas at the ambient transmitter. In [11], for an ambient-backscatter assisted cognitive radio network, the secondary transmitter’s rate is maximized by optimizing the time resource.

In this paper, we consider a full-duplex AmBC network (ABCN) over ambient OFDM carriers as shown in Fig. 1, consisting of a full-duplex access point (FAP), a legacy user (LU), and multiple BDs. We optimize the throughput performance for such an ABCN, which has not been studied in the literature to our best knowledge. The main contributions of this paper are summarized as follows:

In this section, we present the system model for a full-duplex ABCN. As illustrated in Fig. 1, we consider two co-existing communication systems: the legacy communication system which consists of an FAP with two antennas for simultaneous information transmission and reception, respectively, and its dedicated LU111We consider the case of a single LU, since the FAP typically transmits to an LU in a short period for practical OFDM systems like WiFi system. The analyses and results can be extended to the multiple-LU case., and the AmBC system which consists of the FAP and M BDs. The FAP transmits OFDM signals to the LU. We are interested in the AmBC system in which each BD transmits its modulated signal back to the FAP over its received ambient OFDM carrier. Each BD contains a backscatter antenna, a switched load impedance, a micro-controller, a signal processor, an energy harvester, and other modules (e.g., battery, memory, sensing). The BD modulates its received ambient OFDM carrier by intentionally switching the load impedance to vary the amplitude and/or phase of its backscattered signal, and the backscattered signal is received and finally decoded by the FAP. The energy harvester collects energy from ambient OFDM signals and uses it to replenish the battery which provides power for all modules of the BD.

We consider frame-based transmission, and the frame structure is shown in Fig. 2. In each frame of time duration T (seconds) consisting of M slots, the FAP simultaneously transmits downlink OFDM signals to the LU, and receives uplink signals backscattered from all BDs in a time-division-multiple-access (TDMA) manner. The m-th slot of time duration τmT (with time portion τm (0≤τm≤1)) is assigned to the m

Let Sm,k(n)∈C be the FAP’s information symbol at the k-th subcarrier, ∀k, in the n-th OFDM symbol period of the m

-th slot. After inverse discrete Fourier transform at the FAP, a cyclic-prefix (CP) of length

In the m-th slot, the incident signal at BD m is sm,t(n)⊗fm,l, where ⊗ means the convolution operation. Let αm (0≤αm≤1) be the m-th BD’s power reflection coefficient, and denote the vector α=[α1 α2…αM]T. Let η (0≤η≤1) be the energy-harvesting efficiency for all BDs. From the aforementioned system model and [12], the total harvested energy by BD m in all slots is thus

Let Xm(n) be the m-th BD’s information symbol, whose duration is designed to be the same as the OFDM symbol period. We assume each BD can align the transmission of its own symbol Xm(n) with its received OFDM symbol222

The transmitted downlink signal sm,t is known by the FAP’s receiving chain. Thus, this signal can be reconstructed and subtracted from the received signals. Therefore, the self-interference can be cancelled by using existing digital or analog cancellation techniques. For this reason, we assume perfect self-interference cancellation (SIC) at the FAP in this paper. After performing SIC, the received signal backscattered from the m-th BD is given by

After CP removal and discrete Fourier transform operation at the FAP, the received frequency-domain signal is

where the frequency-domain noise Wm,k(n)∼CN(0,σ2).

and the resulting decoding signal-to-noise-ratio (SNR) is

Similar to (4), the received frequency-domain signal at the LU can be written as follows

Similar to (II), treating backscatter-link signal as interference, the total throughput of the LU is given by

In this section, we formulate the optimization problem. The objective is to maximize the minimum throughput Q(τ,α,P)≜minm=1,…,MRm(τm,αm,pm) among all BDs, by jointly optimizing the BDs’ backscatter time portions (i.e., τ), the BD’s power reflection coefficients (i.e., α), and the FAP’s subcarrier power allocation (i.e., P). We consider the following constraints: the total throughput of the LU needs to be larger than a given minimum throughput D, i.e., ˜R(τ,α,P)≥D; each BD has a minimum energy requirement Emin,m, i.e., Em(τ,αm,P)≥Emin,m,∀m; the total power consumed by the FAP needs to be less than a given maximum power ¯P, i.e., ∑Mm=1∑N−1k=0τmPm,k≤¯P; the sum of backscatter time portions for all BDs should be no larger than 1, i.e., ∑Mm=1τm≤1, with non-negative time portion τm for each BD m; the peak power value for each subcarrier is Ppeak, i.e., 0≤Pm,k≤Ppeak, ∀m,k; the power reflection coefficients are positive numbers and no larger than 1, i.e., 0≤αm≤1, ∀m. The optimization problem is thus formulated as follows

Notice that problem (10) is non-convex and challenging to solve in general, since the variables are all coupled and the constraint function in (10c) is non-convex over Pm,k’s.

In this section, we propose an efficient iterative algorithm for the problem (10) by applying the block coordinate descent (BCD) [13] and successive convex optimization (SCO) techniques [14]. Then, we show the convergence of the proposed algorithm and analyze its complexity.

In iteration j, for given power reflection coefficients α{j} and subcarrier power allocation P{j}, the backscatter time portions τ can be optimized by solving the problem

where the variables Pm,k’s and αm’s are replaced by given P{j}m,k’s and α{j}m’s, respectively, in all the constraints. Notice that problem (11

) is a standard linear programming (LP), it can be solved efficiently by existing optimization tools such as CVX

For given backscatter time portions τ{j} and subcarrier power allocation P{j}, the power reflection coefficients α can be optimized by solving the following problem

where the variables Pm,k’s and τm’s are replaced by given P{j}m,k’s and τ{j}m’s, respectively. Since the left-hand-side of the constraint (10c) with given P{j}m,k and τ{j}m is a decreasing and convex function of αm, the constraint is convex. Hence, problem (12) is a convex optimization problem that can also be efficiently solved by CVX [15].

For given backscatter time portions τ{j} and power reflection coefficients αj, the subcarrier power allocation P can be optimized by solving the following problem

To handle the non-convex constraint (13b), we exploit the SCO technique [14] to approximate the second logarithm function in (IV-C). Recall that any concave function can be globally upper-bounded by its first-order Taylor expansion at any point. Specifically, let P{j}m,k denote the subcarrier power allocation in the last iteration. We have the following concave lower bound at the local point P{j}m,k

With given local points P{j} and lower bound ˜Rlb(P)|τ{j},α{j},P{j} in (15), by introducing the lower-bound minimum-throughput Qlbtpa, problem (13) is approximated as the following problem

We propose an overall iterative algorithm for problem (10) by applying the BCD technique [13]. Specifically, the entire variables in original problem (10) are partitioned into three blocks, i.e., τ,α, and P, which are alternately optimized by solving problem (11), (12), and (16) correspondingly in each iteration, while keeping the other two blocks of variables fixed. Furthermore, the obtained solution in each iteration is used as the input of the next iteration. The details are summarized in Algorithm 1.

Notice that in our case, for subcarrier power allocation problem (13), we only solve its approximate problem (16) optimally. Thus, the convergence analysis for the classical BCD technique cannot be directly applied [13], and the convergence of Algorithm 1 needs to be proved, as follows.

Algorithm 1 is guaranteed to converge.

First, in step 3 of Algorithm 1, since the optimal solution τ{j+1} is obtained for given α{j} and P{j}, we have the following inequality on the minimum throughput Q(τ,α,P)

Third, in step 5, it follows that

The complexity of Algorithm 1 is polynomial, since only three convex optimization problems need to be solved in each iteration. Hence, the proposed Algorithm 1 can be practically implemented with fast convergence for full-duplex ABCNs with a moderate number of BDs and LU(s).

In this section, we provide simulation results to evaluate the performance of the proposed joint design. We consider an ABCN with M=2

BDs. Suppose that the FAP-to-BD1 distance and FAP-to-BD2 distance are 2.5 m and 4 m, respectively, the FAP (BD1, BD2)-to-LU distances are all 15 m. We assume independent Rayleigh fading channels, i.e., the channel coefficient of each path is a circularly symmetric complex Gaussian prandom variable, and the power gains of multiple paths are exponentially distributed. For each channel link, its first-path channel power gain is assumed to be

10−3d−2, where d is the distance with unit of meter. Let the number of pathes Lf=Lg=4, Lh=8, and Lv=6. Other parameters are set as N=64,Ncp=16,¯P=1,η=0.5,ϵ=10−4. Define the average receive SNR at the FAP as ¯γ=¯P∑Lf−1l=0E[|g1,lf1,l|2]/σ2. Let Emin,1=Emin,2=Emin. For performance comparison, we consider a benchmark scheme in which the backscatter time portion and subcarrier power are equally allocated, i.e., τm=1M,Pm,k=Pave=1MN, and all BDs adopt a common power reflection coefficient that is optimized via CVX. The following results are obtainepd based on 100 random channel realizations.

This paper has investigated a full-duplex AmBC network over ambient OFDM carriers. The minimum throughput among all BDs is maximized by jointly optimizing the BDs’ backscatter time portions, the BDs’ power reflection coefficients, and the FAP’s subcarrier power allocation. By utilizing the block coordinated decent and successive convex optimization techniques, an efficient iterative algorithm is proposed, which is guaranteed to converge. Numerical results show that significant throughput gains are achieved as compared to the benchmark scheme with equal resource allocation, benefitting from multiple design dimensions of the proposed joint optimization. The interesting BDs’ throughput-energy tradeoff and the throughput tradeoff between the BDs and the LU are also revealed.