We consider the learning algorithms under general source condition with the polynomial decay of the eigenvalues of the integral operator in vector-valued function setting. We discuss the upper convergence rates of Tikhonov regularizer under general source condition corresponding to increasing monotone index function. The convergence issues are studied for general regularization schemes by using the concept of operator monotone index functions in minimax setting. Further we also address the minimum possible error for any learning algorithm. 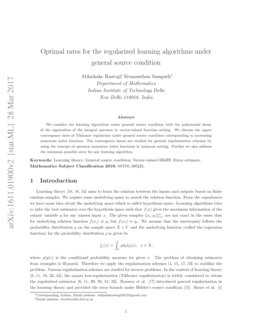 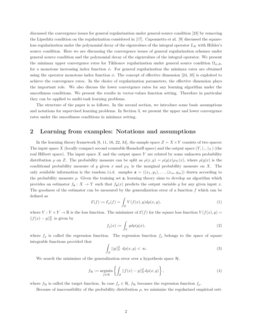 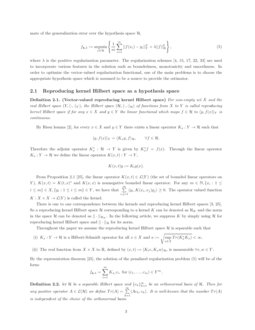 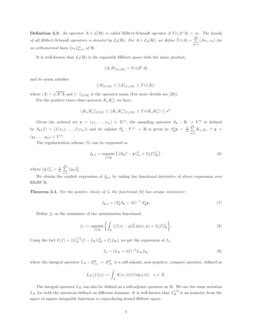 Learning theory [10, 16, 34] aims to learn the relation between the inputs and outputs based on finite random samples. We require some underlying space to search the relation function. From the experiences we have some idea about the underlying space which is called hypothesis space. Learning algorithms tries to infer the best estimator over the hypothesis space such that f(x) gives the maximum information of the output variable y for any unseen input x. The given samples {xi,yi}mi=1 are not exact in the sense that for underlying relation function f(xi)≠yi but f(xi)≈yi

. We assume that the uncertainty follows the probability distribution

The structure of the paper is as follows. In the second section, we introduce some basic assumptions and notations for supervised learning problems. In Section 3, we present the upper and lower convergence rates under the smoothness conditions in minimax setting.

2 Learning from examples: Notations and assumptions

In the learning theory framework [8, 11, 16, 22, 34], the sample space Z=X×Y consists of two spaces: The input space X (locally compact second countable Hausdorff space) and the output space (Y,⟨⋅,⋅⟩Y) (the real Hilbert space). The input space X and the output space Y are related by some unknown probability distribution ρ on Z. The probability measure can be split as ρ(x,y)=ρ(y|x)ρX(x), where ρ(y|x) is the conditional probability measure of y given x and ρX is the marginal probability measure on X. The only available information is the random i.i.d. samples z=((x1,y1),…,(xm,ym)) drawn according to the probability measure ρ. Given the training set z, learning theory aims to develop an algorithm which provides an estimator fz:X→Y such that fz(x) predicts the output variable y for any given input x. The goodness of the estimator can be measured by the generalization error of a function f which can be defined as

is the loss function. The minimizer of

We search the minimizer of the generalization error over a hypothesis space H,

where fH is called the target function. In case fρ∈H, fH becomes the regression function fρ.

Because of inaccessibility of the probability distribution ρ, we minimize the regularized empirical estimate of the generalization error over the hypothesis space H,

where λ is the positive regularization parameter. The regularization schemes [4, 15, 17, 22, 33] are used to incorporate various features in the solution such as boundedness, monotonicity and smoothness. In order to optimize the vector-valued regularization functional, one of the main problems is to choose the appropriate hypothesis space which is assumed to be a source to provide the estimator.

By Riesz lemma [2], for every x∈X and y∈Y there exists a linear operator Kx:Y→H such that

By the representation theorem [25], the solution of the penalized regularization problem (5) will be of the form:

let H be a separable Hilbert space and {ek}∞k=1 be an orthonormal basis of H. Then for any positive operator A∈L(H) we define Tr(A)=∞∑k=1⟨Aek,ek⟩. It is well-known that the number Tr(A) is independent of the choice of the orthonormal basis.

It is well-known that L2(H) is the separable Hilbert space with the inner product,

and its norm satisfies

For the positive trace class operator KxK∗x, we have

The regularization scheme (5) can be expressed as

We obtain the explicit expression of fz,λ by taking the functional derivative of above expression over RKHS H.

For the positive choice of λ, the functional (6) has unique minimizer:

Define fλ as the minimizer of the optimization functional,

where the integral operator LK:L2ρX→L2ρX is a self-adjoint, non-negative, compact operator, defined as

The integral operator LK can also be defined as a self-adjoint operator on H. We use the same notation LK for both the operators defined on different domains. It is well-known that L1/2K is an isometry from the space of square integrable functions to reproducing kernel Hilbert space.

In addition, we consider the set of probability measures Pϕ,b which satisfies the conditions (i), (ii), (iii), (iv) and the eigenvalues tn’s of the integral operator LK follow the polynomial decay: For fixed positive constants α,β and b>1,

Under the polynomial decay of the eigenvalues the effective dimension N(λ), to measure the complexity of RKHS, can be estimated from Proposition 3 [9] as follows,

and without the polynomial decay condition (13), we have

for all 0<η≤1 and ε(m) is a positive decreasing function of m. Using these probabilistic estimates we can obtain error estimates in expectation by integration of tail inequalities:

In this section, we analyze the convergence issues of the learning algorithms on reproducing kernel Hilbert space under the smoothness priors in the supervised learning framework. We discuss the upper and lower convergence rates for vector-valued estimators in the standard minimax setting. Therefore the estimates can be utilized particularly for scalar-valued functions and multi-task learning algorithms.

In order to estimate the error bounds, we consider the following inequality used in the papers [4, 9] which is based on the results of Pinelis and Sakhanenko [27].

be a random variable on the probability space

In particular, the inequality (15) holds if

We estimate the error bounds for the regularized estimators by measuring the effect of random sampling and the complexity of fH. The quantities described in Proposition 3.2 express the probabilistic estimates of the perturbation measure due to random sampling. The expressions of Proposition 3.3 describe the complexity of the target function fH which are usually referred as the approximation errors. The approximation errors are independent of the samples z.

Let z be i.i.d. samples drawn according to the probability measure ρ satisfying the assumptions (10), (11) and κ=√supx∈XTr(K∗xKx). Then for all 0<η<1, with the confidence 1−η, we have

To estimate the first expression, we consider the random variable ξ1(z)=(LK+λI)−1/2Kx(y−fH(x)) from (Z,ρ) to reproducing kernel Hilbert space H with

On applying Proposition 3.1 we conclude that

The second expression can be estimated easily by considering the random variable ξ2(x)=KxK∗x from (X,ρX) to L(H). The proof can also be found in De Vito et al. [13]. ∎

Using the functional calculus we get,

Then under the assumptions on ϕ described in (i), we obtain

and under the assumptions on ϕ described in (ii), we have

In the same manner with the assumptions on ϕ described in (ii), we get

Let z be i.i.d. samples drawn according to the probability measure ρ∈Pϕ where ϕ is the index function satisfying the conditions that ϕ(t), t/ϕ(t) are nondecreasing functions. Then for all 0<η<1, with confidence 1−η, for the regularized estimator fz,λ (7) the following upper bound holds:

The error of regularized solution fz,λ can be estimated in terms of the sample error and the approximation error as follows:

Now fz,λ−fλ can be expressed as

The estimates of I2, I3 can be obtained from Proposition 3.2 and the only task is to bound I1. For this we consider

Now using Proposition 3.2 we get with confidence 1−η/2,

From Proposition 3.2 we have with confidence 1−η/2,

Again from the condition (21) we get with probability 1−η/2,

Let z be i.i.d. samples drawn according to the probability measure ρ∈Pϕ and fz,λ is the regularized solution (7) corresponding to Tikhonov regularization. Then for all 0<η<1, with confidence 1−η, the following upper bounds holds:

The estimates of I2 and I3 can be obtained from Proposition 3.2. To get the estimate for the sample error, we consider the following expression to bound I4,