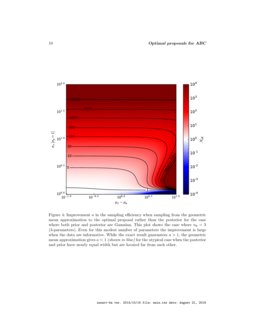 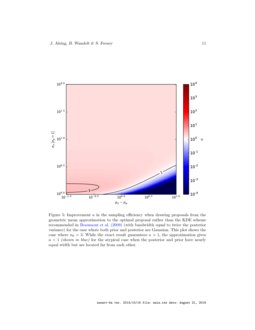 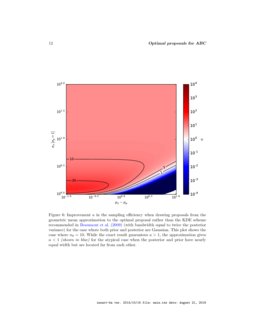 HMC: avoiding rejections by not using leapfrog and an analysis of the acceptance rate

We give numerical evidence that the standard leapfrog algorithm may not ...
M. P. Calvo, et al. ∙

The naïve approach to Approximate Bayesian Computation (ABC) generates (compressed) data simulations for parameters θ that are drawn from the prior π(θ). If the resulting simulated data d′ is within ϵ of the true data d, i.e. under a distance metric ρ(d,d′)≤ϵ, then θ is accepted as a sample from the approximate posterior density, p(θ|ρ(d,d′)≤ϵ).

If simulation is costly, it is advantageous to attempt to increase the fraction of accepted θ by proposing new candidate θs from a proposal density q(θ) that is large in parameter ranges that are preferred by the data, and small in less interesting regions of the prior volume. It is natural to base the choice of q(θ) on the current accepted samples from the approximate posterior p(θ|ρ(d,d′)≤ϵ). This is the approach taken in SMC-ABC algorithms (see eg., Marin et al., 2012 for a review); a proposal density q(θ)

The price to pay for the increased fraction of accepted ABC samples of θ is the necessity to importance weight the accepted samples by π/q. The variance in these importance weights will reduce the effective number of samples. The more concentrated q is relative to π, on parameters θ

that have a high probability of being accepted, the larger the variance in the importance weights

. Previous studies have sought kernels that are optimal in the following sense: they minimize the sum of the Kullback-Leibler divergence between the proposal KDE and the target density, and the negative log acceptance ratio, providing some trade-off between closeness of the target and proposal and the acceptance ratio

In this paper we take a slightly different approach and derive the proposal density q(θ) for SMC-ABC sampling that maximizes the effective number of samples per parameter proposal (and hence forward simulation). This provides the optimal trade-off between high acceptance rate and low variance in the importance weights under a straightforward and pragmatic definition of optimality. Rather than restricting to a given class of perturbation kernels (eg., Gaussian kernels), we derive the optimal proposal density (in the asymptotic ϵ→0 limit) assuming only that some density estimator for the ABC posterior is available at each population iteration. The result provides a well-motivated guide for adaptive proposal density choice for SMC-ABC sampling.

The expected fraction of accepted points is given by

where pq(d) is the probability density of simulated data d when the parameters are proposed from q, Vϵ is the volume of the space for accepted samples, and ”≈” becomes accurate in the limit of small ϵ, assuming p(d) is continuous.

where the second equality defines the functionals A[q] and B[q], and the last proportionality defines the sampling efficiency as the number of effective (accepted) samples per parameter proposal (and hence forward simulation). For naïve ABC, proposing parameters from the prior, ω[π]=1. Maximizing ω[q] with respect to q, under the constraint of q being normalized, gives the optimal proposal

This is the main result of the paper. This implicit equation for q∗ can be solved iteratively; alternatively one can just consider ω∗≡ω[q∗] and A∗≡A[q∗] as parameters and

Further, there are two simple and fast approximations for q∗ that can be obtained without iteration or that can inform good starting points for the iteration; these are discussed in §2.1.

Note that we only need to know A to be able to sample from the optimal proposal (2.7), since ω just sets the normalization. Assuming a density estimator for p(θ|d) is available, and π

is easy to evaluate, then Markov Chain Monte Carlo (MCMC) methods can efficiently generate draws from

q∗ to serve as parameter proposals for the next SMC iteration.

) can be seen as the geometric mean of posterior and prior (ie., the numerator), with a relative boost where the posterior is larger than the prior. The denominator boosts

q∗ in the region where the posterior peaks, but the peaks in q∗ are narrower than the corresponding ones in p(θ|d) in their immediate neighborhoods to compensate for the heavier tails away from the peaks. Illustrative examples are shown in Figures 1–3 and discussed in §2.2.

Convergence follows from the properties of the binomial coefficient and the lower bound on A[q∗] in Eq. (2.12) below. In numerical experiments we find the i>0 terms give sub-dominant contributions to ω for a wide variety of choices for q, p and π. Taking the normalized leading term of the series gives the geometric mean approximation to the optimal proposal222 From Jensen’s inequality we have

Note that for simple cases where the posterior is Gaussian under a uniform prior, the geometric mean approximation leads to a Gaussian proposal density centered on the posterior mean and with twice the posterior covariance. This is similar to taking a Gaussian KDE proposal with bandwidth equal to the estimated posterior variance; this kernel scheme is sometimes adopted in the ABC literature (eg., Sisson et al., 2007; Ishida et al., 2015).

Given the value of A[q∗], we could sample the optimal proposal density Eq. (2.7). Whilst A[q∗] is not available a priori, we can bound A[q∗] from above and below: using Hölder’s inequality to obtain the upper bound, and the non-negativity of probability densities for the lower bound, we find that

Choosing a value of A[q∗] between these bounds avoids the need for iteration for the cost of a mild reduction in optimality. Fixing A to be the average of the upper and the lower bound leads to the bounded approximation for the optimal proposal,

In numerical experiments, we find that the bounded approximation gives close to optimal sampling efficiencies (see §2.2 and Table 1). If further optimality is desired, this can be used as a starting point for iterating Eq. (2.7) towards the optimal q∗.

All that is required to propose samples from the optimal proposal or an approximation of it is a density estimator for the posterior. In practice, this could be a KDE or mixture model fit to the accepted samples in the previous SMC population. With a posterior density estimator in hand, the optimal proposal can be found iteratively using Eq. (2.7), or via one of the convenient approximations Eq. (2.11) or (2.13), and then sampled using MCMC or otherwise to generate parameter proposals for the next SMC iteration.

2.2.1 Numerical examples of optimal ABC proposals and their approximations

The three examples shown in Figures 1–3 and Table 1 display the same essential characteristics. The optimal proposals are boosted in regions of high posterior density (around the peak) to give a high acceptance rate, whilst having slightly broader tails compared to the posterior to ensure the importance-weight variance is kept under control (hence giving an improved effective sample size). In contrast, the KDE proposals are typically much broader than the optimal proposals around the posterior peak, which leads to lower expected acceptance rates. Meanwhile, using a posterior density estimate for the proposal gives a poor expected importance-weight variance, owing to the narrower tails compared to the other proposal schemes. The optimal proposal represents the trade-off between high proposal density in regions of high posterior density, and fatter tails to maintain a lower importance-weight variance.

These three one-dimensional examples have the virtue of being easy to visualise and to show the features of the optimal proposal for Gaussian, skewed and multi-modal posteriors. In the following section we demonstrate that a lower bound on the expected relative improvement of the optimal proposal improves exponentially on the performance of other kernels.

2.2.2 Expected improvement as a function of data informativeness and parameter dimensionality

We can obtain a lower bound on the improvement in sampling efficiency enabled by the optimal proposal by applying the geometric mean approximation to a simple toy problem. In this model, we take the prior and posterior to be nθ-dimensional multivariate Gaussians, with means in each dimension of μπ and μp=0, and diagonal covariances with variances σ2π and σ2p=1, respectively. We then exploit the fact that ω[q0] can be obtained analytically in this setting to rapidly evaluate the improvement in sampling efficiency over other choices of the proposal as a function of the dimensionality of the parameter space and the informativeness of the data (as measured by both the reduction in volume and the shift in the mean in going from prior to posterior). As the optimal proposal q∗ outperforms the geometric mean approximation q0, the results in this section can be considered lower bounds on the improvement in performance realized by using the optimal proposal.

Inspecting the analytical result for the Gaussian case confirms that the relative improvement in sampling efficiency of the geometric mean approximation scales exponentially with the number of parameters when compared to the other cases we study here. This also implies exponentially scaling improvement with number of parameters for the optimal proposal.

We have derived an optimal proposal scheme for SMC-ABC algorithms by maximizing the sampling efficiency, defined as the effective number of samples per parameter proposal. This represents the optimal trade-off between obtaining a high acceptance rate, whilst reducing the variance of the importance-weights of the accepted samples, hence increasing the effective sample size for the accepted samples. We derived an implicit form for the optimal proposal that can be solved iteratively, and also two convenient and simple approximations that can be evaluated quickly, provided a density estimator for the posterior is available (based on the accepted samples from the previous SMC population).

We have shown that the optimal proposal scheme gives a substantial boost in the expected sampling efficiency for a range of statistical models, and the expected gain in sampling efficiency increases with the dimensionality of the problem. The derived results hence provide a guide for choosing optimal proposal densities for SMC-ABC applications, for the small cost of constructing a posterior density estimator at each SMC population iteration.