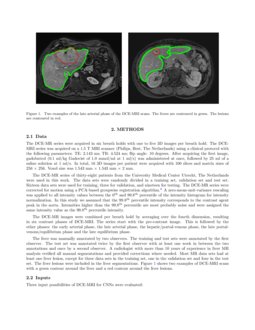 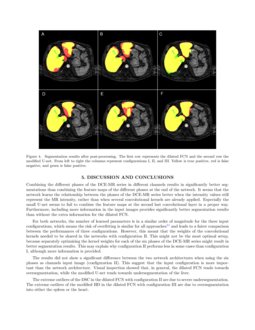 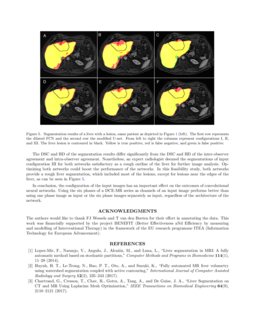 Automatic liver segmentation in abdominal MR images is an important step in automatic detection and characterization of focal liver lesions. Most (semi-)automatic MR liver segmentation methods are designed to process an anatomical 3D image as input instead of the dynamic contrast enhanced (DCE) MR images.[Lopez-Mir2014, Huynh2017, Chartrand2017, Masoumi2012] These DCE-MR images hold valuable information about liver shape and function in the different contrast phases. Using the rich information of the DCE-MR images in convolutional neural networks (CNNs) might improve the segmentation performance.

However, it is unclear how dynamic MR series are best incorporated in CNNs. There are several ways to process the series in a CNN. The conventional way is to use one of the 3D phase images of the DCE-MR series as input of a CNN, but this neglects the dynamic nature of the DCE-MR series. To include the complete series of phases, rather than a single one, we investigate two different approaches. One is to process each phase separately in the CNN and merge the feature maps of the different phases at the end of the CNN. The second approach is to use the phases as different channels of the input image, like an RGB image. Each of the latter two configurations contains identical input information, but it is processed differently, which might result in different outcomes.

The DCE-MR series of thirty-eight patients from the University Medical Center Utrecht, The Netherlands were used in this work. The data sets were randomly divided in a training set, validation set and test set. Sixteen data sets were used for training, three for validation, and nineteen for testing. The DCE-MR series were corrected for motion using a PCA-based groupwise registration algorithm[Jansen2017]

. A zero-mean-unit-variance rescaling was applied to all intensity values between the 0

percentile are most probably noise and were assigned the same intensity value as the 99.8

The liver was manually annotated by two observers. The training and test sets were annotated by the first observer. The test set was annotated twice by the first observer with at least one week in between the two annotations and once by a second observer. A radiologist with more than 10 years of experience in liver MR analysis verified all manual segmentations and provided corrections where needed. Most MR data sets had at least one liver lesion, except for three data sets in the training set, one in the validation set and four in the test set. The liver lesions were included in the liver segmentations. Figure 1 shows two examples of DCE-MRI scans with a green contour around the liver and a red contour around the liver lesions.

Three input possibilities of DCE-MRI for CNNs were evaluated:

Dilated fully convolutional network The dilated FCN[Yu2016] consists of 7 layers with each a 3×3 convolution and 32 kernels. The 3rd layer has a dilation of 2, the 4th layer a dilation of 4, the 5th layer of 8 and the 6th layer of 16. The final 8th layer has a 1×1 convolution. This gives a receptive field of 67×67 pixels. Modified U-net The second network is smaller than the conventional U-net[Ronneberger2015], it only has four stages with three skip connections. We choose a smaller network because our images are only 256×256 voxels and an extra layer of downsampling would result in small feature maps. Also the number of kernels was reduced to 16 in the upper layers and to 128 kernels in the bottom layers. For the input approach in which the phase images are used as separate input images (configuration II), the feature maps of the six phases are concatenated and an extra 1×1 convolution layer is added before the final 1×1 convolution layer in both networks, to combine the feature maps. Figure 2 gives an overview of both network architectures. The loss is calculated by a similarity metric: (2∗X∩Y+s)/(X2+Y2+s), where X is the predicted segmentation, Y is the ground truth mask and s is a small number to prevent dividing by zero and set to 1e-5[Milletari2016]

. ReLU activation and batch normalization are used in all the convolutional layers, except for the final layer which has a softmax activation. Glorot uniform initialization

[Glorot2010] and Adam optimization with a learning rate of 0.001 are used. The networks were trained for 500,000 iterations, with mini batches of one slice per mini batch. No data augmentation was applied.


To limit the parameters and training time for this feasibility study, both networks were trained on 2D slices, but the concept can easily be expanded to 3D.

The post-processing consists of setting a threshold of 0.50 on the probability outcome of the networks. After that 3D hole filling is performed, to fill the holes caused by liver lesions. The largest connected component is selected as the final segmentation.

The performance of the three input configurations is evaluated based on the Dice similarity coefficient (DSC) and the modified Hausdorff distance (HD) based on the 95th percentile. The first set of liver annotations of the first observer is considered the ground truth. DSC: (2∗X∩Y)/(X+Y), where X is the predicted segmentation and Y the ground truth mask. HD at 95th percentile: max(h95(X,Y),h95(Y,X)), with h95(X,Y)=K95thx∈Xmin∥y−x∥. Where K is the 95th ranked minimum of the minimum Euclidean distances between all points of y and x.

These two metrics are computed on the segmentation results for each input configuration and network architecture. The DSC and the loss function are both similarity metrics and thus the outcomes of the CNNs are optimized for the DSC. However, the DSC can be used to compare the segmentation results of different network architectures and input configurations, since the loss function is always the same.

The DSC and HD values of the liver segmentations of the three input configurations for the two CNNs are given in Figure 3.

Examples of the segmentation results of one slice for the three input configurations and the two neural networks are given in Figure 4. It shows a typical result, where configuration III shows the best result for both network architectures. Segmentation results of a liver with a large lesion are given in Figure 5. A great part of the lesion is included in the segmentations. Configuration II has the worst results with regard to the lesion for both networks.

Combining the different phases of the DCE-MR series in different channels results in significantly better segmentations than combining the feature maps of the different phases at the end of the network. It seems that the network learns the relationship between the phases of the DCE-MR series better when the intensity values still represent the MR intensity, rather than when several convolutional kernels are already applied. Especially the small U-net seems to fail to combine the feature maps at the second last convolutional layer in a proper way. Furthermore, including more information in the input images provides significantly better segmentation results than without the extra information for the dilated FCN.

For both networks, the number of learned parameters is in a similar order of magnitude for the three input configurations, which means the risk of overfitting is similar for all approaches[Jain2000] and leads to a fairer comparison between the performances of three configurations. However, this meant that the weights of the convolutional kernels needed to be shared in the networks with configuration II. This might not be the most optimal setup, because separately optimizing the kernel weights for each of the six phases of the DCE-MR series might result in better segmentation results. This may explain why configuration II performs less in some cases than configuration I, although more information is provided.

The results did not show a significant difference between the two network architectures when using the six phases as channels input image (configuration II). This suggest that the input configuration is more important than the network architecture. Visual inspection showed that, in general, the dilated FCN tends towards oversegmentation, while the modified U-net tends towards undersegmentation of the liver.

The DSC and HD of the segmentation results differ significantly from the DSC and HD of the inter-observer agreement and intra-observer agreement. Nonetheless, an expert radiologist deemed the segmentations of input configuration III for both networks satisfactory as a rough outline of the liver for further image analysis. Optimizing both networks could boost the performance of the networks. In this feasibility study, both networks provide a rough liver segmentation, which included most of the lesions, except for lesions near the edges of the liver, as can be seen in Figure 5.

In conclusion, the configuration of the input images has an important effect on the outcomes of convolutional neural networks. Using the six phases of a DCE-MR series as channels of an input image performs better than using one phase image as input or the six phase images separately as input, regardless of the architecture of the network.

The authors would like to thank FJ Wessels and T van den Beeten for their effort in annotating the data. This work was financially supported by the project BENEFIT (Better Effectiveness aNd Efficiency by measuring and modelling of Interventional Therapy) in the framework of the EU research programme ITEA (Information Technology for European Advancement).