This work discusses the finite element discretization of an optimal control problem for the linear wave equation with time-dependent controls of bounded variation. The main focus lies on the convergence analysis of the discretization method. The state equation is discretized by a space-time finite element method. The controls are not discretized. Under suitable assumptions optimal convergence rates for the error in the state and control variable are proven. Based on a conditional gradient method the solution of the semi-discretized optimal control problem is computed. The theoretical convergence rates are confirmed in a numerical example. 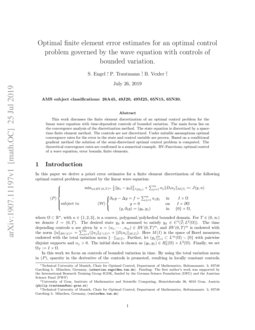 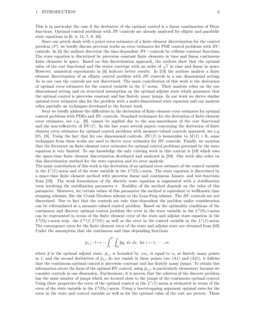 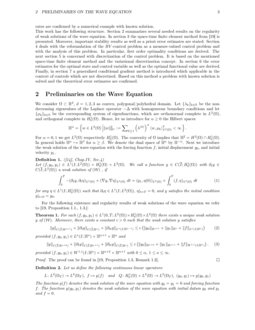 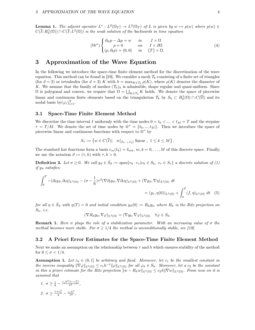 In this paper we investigate a priori error estimates for the space-time...
Marita Holtmannspötter, et al. ∙

Approximation of Algebraic Riccati Equations with Generators of Noncompact Semigroups

In this work, we demonstrate that the Bochner integral representation of...
James Cheung, et al. ∙

Optimal control of a quasilinear parabolic equation and its time discretization

In this paper we discuss the optimal control of a quasilinear parabolic ...
Luise Blank, et al. ∙

The scope of this paper is the analysis and approximation of an optimal ...
Konstantinos Chrysafinos, et al. ∙

In this paper we derive a priori error estimates for a finite element discretization of the following optimal control problem governed by the linear wave equation:

In this work we focus on controls of bounded variation in time. By using the total variation norm in (P), sparsity in the derivative of the controls is promoted, resulting in locally constant controls. This is in particular the case if the derivative of the optimal control is a linear combination of Dirac functions. Optimal control problems with BV-controls are already analyzed for elliptic and parabolic state equations in [6, 4, 13, 7, 8, 10].

Since our article deals with a priori error estimates of a finite element discretization for the control problem (P), we briefly discuss previous works on error estimates for PDE control problems with BV-controls. In [4] the authors discretize the time-dependent BV−controls by cellwise constant functions. The state equation is discretized by piecewise constant finite elements in time and linear continuous finite elements in space. Based on this discretization approach, the authors show that the optimal value of the cost functional and the states converge with an order of √τ in time and linear in space. However, numerical experiments in [4] indicate better results. In [13] the authors analyze a finite element discretization of an elliptic control problem with BV-controls in a one dimensional setting. As in our case the controls are not discretized. The main contribution of this work is the derivation of optimal error estimates for the control variable in the L1-norm. Their analysis relies on the one dimensional setting and on structural assumption on the optimal adjoint state which guarantee that the optimal control is piecewise constant and has finitely many jumps. In our work we derive similar optimal error estimates also for the problem with a multi-dimensional wave equation and our analysis relies partially on techniques developed in the former work.

where ¯¯¯p is the optimal adjoint state, ¯p1,i is bounded by ±αi, is equal to αi at finitely many points in I, and the second derivatives of ¯p1,i do not vanish in these points (see (A1) and (A2)), it follows that the continuous optimal control is piecewise constant and has finitely many jumps. To obtain this information about the form of the optimal BV control, using ¯p1,i, is particularly elementary because we consider controls in one dimension. Furthermore, it is proven that the solution of the discrete problem has the same number of jumps which are located close to the jumps of the continuous optimal control. Using these properties the error of the optimal control in the L1(I)-norm is estimated in terms of the error of the state variable in the L2(ΩT)-norm. Using a bootstrapping argument optimal rates for the error in the state and control variable as well as for the optimal value of the cost are proven. These rates are confirmed by a numerical example with known solution. This work has the following structure. Section 2 summarizes several needed results on the regularity of weak solutions of the wave equation. In section 3 the space-time finite element method from [19] is presented. Moreover, important stability results as well as a priori error estimates are stated. Section 4 deals with the reformulation of the BV-control problem as a measure-valued control problem and with the analysis of this problem. In particular, first order optimality conditions are derived. The next section 5 is concerned with discretization of the control problem. It is based on the mentioned space-time finite element method and the variational discretization concept. In section 6 the error estimates for the optimal state and control variable as well as the optimal functional value are derived. Finally, in section 7 a generalized conditional gradient method is introduced which applicable in the context of controls which are not discretized. Based on this method a problem with known solution is solved and the theoretical error estimates are confirmed.

2 Preliminaries on the Wave Equation

be the non-decreasing eigenvalues of the Laplace operator

be the corresponding system of eigenfunctions, which are orthonormal complete in

L2(Ω), and orthogonal complete in H10(Ω). Hence, let us introduce for α≥0 the Hilbert spaces

For α=0,1 we get L2(Ω) respectively H10(Ω). The convexity of Ω implies that H2=H2(Ω)∩H10(Ω). In general holds Hα↪Hβ for α≥β. We denote the dual space of Hα by H−α. Next we introduce the weak solution of the wave equation with the forcing function f, initial displacement y0, and initial velocity y1.

For the following existence and regularity results of weak solutions of the wave equation we refer to [19, Proposition 1.1., 1.3.]:

3 Approximation of the Wave Equation

In the following we introduce the space-time finite element method for the discretization of the wave equation. This method can be found in [19]. We consider a mesh Th consisting of a finite set of triangles (for d=2) or tetrahedra (for d=3) K with h=maxK∈Thρ(K), where ρ(K) denotes the diameter of K. We assume that the family of meshes (Th)h is admissible, shape regular and quasi-uniform. Since Ω is polygonal and convex, we require that Ω=⋃K∈ThK holds. We denote the space of piecewise linear and continuous finite elements based on the triangulation Th by Sh⊂H10(Ω)∩C(¯¯¯¯Ω) and its nodal basis by(φi)Ni=1.

We discretize the time interval I uniformly with the time nodes 0=t0<...<tM=T and the stepsize τ=T/M. We denote the set of time nodes by ¯¯¯¯wτ={t0,...,tM}. Then we introduce the space of piecewise linear and continuous functions with respect to ¯¯¯¯wτ by

Here σ plays the role of a stabilization parameter. With an increasing value of σ the method becomes more stable. For σ≥1/4 the method is unconditionally stable, see [19].

3.2 A Priori Error Estimates for the Space-Time Finite Element Method

Next we make an assumption on the relationship between τ and h which ensures stability of the method for 0≤σ<1/4.

Let ε0∈(0,1] be arbitrary and fixed. Moreover, let c1 be the smallest constant in the inverse inequality ∥∇φ∥L2(Ω)≤c1h−1∥φ∥L2(Ω) for all φh∈Sh. Moreover, let a c2 be the constant in this a priori estimate for the Ritz projection ∥w−Rhw∥L2(Ω)≤c2h∥∇w∥L2(Ω). From now on it is assumed that

This space-time finite element method is related to well-known time-stepping schemes. For σ=0 it is related to the explicit Leap-Frog-method and for σ=14 to the Crank-Nicolson scheme, see also [17, Remark 5.1, 5.4]. A more detailed discussion can be found in [19].

In this section we introduce a specific isomorphism between BV(I)m⊗{(gj)mj=1} and M(I)m×Rm. Based on this isomorphism (P) is equivalently formulated as a measure valued control problem. First of all we prove existence and uniqueness of a solution to (P).

Problem (P) has a unique solution in BV(I)m.

Utilizing the fact, that the forward mapping is continuous from L2(I)m to L2(ΩT), the proof can be carried out along the line of [4, Theorem 3.1]. ∎

Next we introduce several linear and continuous operators and discuss its properties. The operator B:M(I)m×Rm→L2(ΩT) is given by

The measures vj are the derivatives of the generated BV-function and cj are the mean values. Next, we define the predual operator of B given by B∗:L2(ΩT)→C0(I)m×Rm

The operator B∗:L2(ΩT)→C0(I)m×Rm is well defined and the predual of B, i.e. the following holds

The inverse of B is given by

Using B we can rewrite (P) into the equivalent problem

In the following a necessary and sufficient first-order optimality condition of (~P) is presented as well as sparsity results for the derivative of the optimal control. Let (¯¯¯v,¯¯c) be the unique optimal pair. We define the quantities ¯¯¯p=L∗(S(¯¯¯v,¯¯c)−yd) and ¯¯¯p1∈C(¯¯¯I)m by

The following proposition is a consequence of [5, Proposition 3.2.]:

In this section we introduce a discretized version of (~P) and discuss its properties. We use the concept of variational discretization in which the control is not discretized. In particular, we consider the problem (~Psemiϑ):

The existence of an optimal control for (~Psemiϑ) can be similarly shown as in the proof of Theorem 3. ∎

which is continuously differentiable and piecewise quadratic in time.