We consider the optimal experimental design problem for an uncertain Kuramoto model, which consists of N interacting oscillators described by coupled ordinary differential equations. The objective is to design experiments that can effectively reduce the uncertainty present in the coupling strengths between the oscillators, thereby minimizing the cost of robust control of the uncertain Kuramoto model. We demonstrate the importance of quantifying the operational impact of the potential experiments in designing optimal experiments. 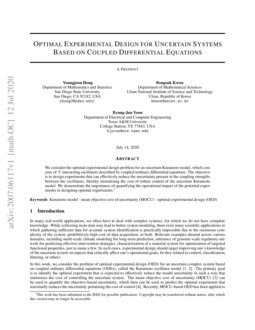 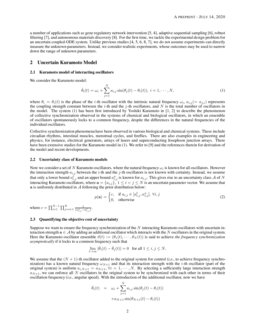 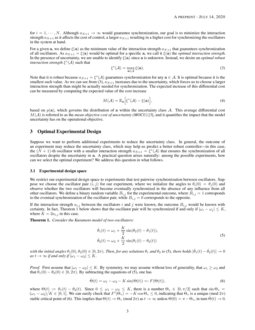 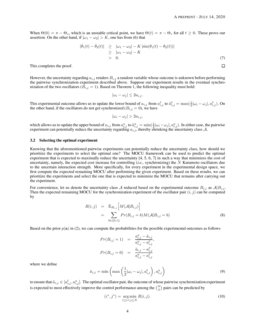 Quantifying the multi-objective cost of uncertainty

The large moment method can be used to compute a large number of moments...
Johannes Blümlein, et al. ∙

In this paper, we address the task of setting up an optimal production p...
Simone Göttlich, et al. ∙

In many real-world applications, we often have to deal with complex systems, for which we do not have complete knowledge. While collecting more data may lead to better system modeling, there exist many scientific applications in which gathering sufficient data for accurate system identification is practically impossible due to the enormous complexity of the system, prohibitively high cost of data acquisition, or both. Relevant examples abound across various domains, including multi-scale climate modeling for long-term prediction, inference of genome-scale regulatory network for predicting effective intervention strategies, characterization of a material system for optimization of targeted functional properties, just to name a few. In such cases, experimental design should target improving one’s knowledge of the uncertain system on aspects that critically affect one’s operational goals, be they related to control, classification, filtering, or others.

In this work, we consider the problem of optimal experimental design (OED) for an uncertain complex system based on coupled ordinary differential equations (ODEs), called the Kuramoto oscillator model [1, 2]. The primary goal is to identify the optimal experiment that is expected to effectively reduce the model uncertainty in such a way that minimizes the cost of controlling the uncertain system. The mean objective cost of uncertainty (MOCU) [3] can be used to quantify the objective-based uncertainty, which then can be used to predict the optimal experiment that maximally reduces the uncertainty pertaining the cost of control [4]. Recently, MOCU-based OED has been applied to a number of applications such as gene regulatory network intervention [5, 4], adaptive sequential sampling [6], robust filtering [7], and autonomous materials discovery [8]. For the first time, we tackle the experimental design problem for an uncertain coupled-ODE system. Unlike previous studies [4, 5, 6, 8, 7], we do not assume experiments can directly measure the unknown parameters. Instead, we consider realistic experiments, whose outcomes may be used to narrow down the range of unknown parameters.

We consider the Kuramoto model:

where θi=θi(t) is the phase of the i-th oscillator with the intrinsic natural frequency ωi, ai,j(=aj,i) represents the coupling strength constant between the i-th and the j-th oscillators, and N is the total number of oscillators in the model. The system (1) has been first introduced by Yoshiki Kuramoto in [1, 2] to describe the phenomenon of collective synchronization observed in the systems of chemical and biological oscillators, in which an ensemble of oscillators spontaneously locks to a common frequency, despite the differences in the natural frequencies of the individual oscillators.

Collective synchronization phenomena have been observed in various biological and chemical systems. These include circadian rhythms, intestinal muscles, menstrual cycles, and fireflies. There are also examples in engineering and physics, for instance, electrical generators, arrays of lasers and superconducting Josephson junction arrays. There have been extensive studies for the Kuramoto model in (1). We refer to [9] and the references therein for derivation of the model and recent developments.

is an uncertain parameter vector. We assume that

is uniformly distributed in

A following the prior distribution below:

2.3 Quantifying the objective cost of uncertainty

for i=1,⋯,N. Although aN+1→∞ would guarantee synchronization, our goal is to minimize the interaction strength aN+1 as it affects the cost of control, a larger aN+1 resulting in a higher cost for synchronizing the oscillators in the system at hand.

Note that it is robust because aN+1=ξ∗(A) guarantees synchronization for any a∈A. It is optimal because it is the smallest such value. As we can see from (3), aN+1 increases due to the uncertainty, which forces us to choose a larger interaction strength than might be actually needed for synchronization. The expected increase of this differential cost can be measured by computing the expected value of the cost increase

based on p(a), which governs the distribution of a within the uncertainty class A. This average differential cost M(A) is referred to as the mean objective cost of uncertainty (MOCU) [3], and it quantifies the impact that the model uncertainty has on the operational objective.

We restrict our experimental design space to experiments that test pairwise synchronization between oscillators. Suppose we choose the oscillator pair (i,j) for our experiment, where we initialize the angles to θi(0)=θj(0)

and observe whether the two oscillators will become eventually synchronized in the absence of any influence from all other oscillators. We define a binary random variable

If the interaction strength ai,j between the oscillators i and j were known, the outcome Bi,j would be known with certainty. In fact, Theorem 1 below shows that the oscillator pair will be synchronized if and only if |ωi−ωj|≤K, where K=2ai,j in this case.

Consider the Kuramoto model of two-oscillators:

However, the uncertainty regarding ai,j renders Bi,j a random variable whose outcome is unknown before performing the pairwise synchronization experiment described above. Suppose our experiment results in the eventual synchronization of the two oscillators (Bi,j=1). Based on Theorem 1, the following inequality must hold:

This experimental outcome allows us to update the lower bound of ai,j from aℓi,j to ~aℓi,j=max(12|ωi−ωj|,aℓi,j). On the other hand, if the oscillators do not get synchronized (Bi,j=0), we have

which allows us to update the upper bound of ai,j from aui,j to ~aui,j=min(12|ωi−ωj|,aui,j). In either case, the pairwise experiment can potentially reduce the uncertainty regarding ai,j, thereby shrinking the uncertainty class A.

For convenience, let us denote the uncertainty class A reduced based on the experimental outcome Bi,j as A|Bi,j. Then the expected remaining MOCU for the synchronization experiment of the oscillator pair (i,j) can be computed by

), we can compute the probabilities for the possible experimental outcomes as follows

to ensure that ~ai,j∈[aℓi,j,aui,j]. The optimal oscillator pair, the outcome of whose pairwise synchronization experiment is expected to most effectively improve the control performance among the (N2) pairs can be predicted by

In this section, we present numerical experiments to demonstrate our proposed OED method described in Section 3.2. A classical fourth-order Runge-Kutta method is used to compute the Kuramoto model in (1) for 0≤t≤T for T=5 with time discretization Δt=1/160. For the sake of simplicity, the initial conditions are set to θi=0, 1≤i≤N. As the system is regular enough, the Runge-Kutta solvers provide reasonably accurate numerical solutions. For instance, the relative L2-error of a five-oscillator model (N=5) is 10−10∼10−9 at t=T. To examine synchronization of the model, difference in θi is measured by

If the model is synchronized, the maximum difference is sufficiently small for t>T/2 such that

with tol=10−4. Due to the immense uncertainty in parameters, the sample size K for computing the expectation in (4) should be sufficiently large (e.g. K≥20,000) to obtain reliable experimental results. In this regard, massive computing power is highly desired, and we adopt GPU parallel computing, PyCUDA [10], using Nvidia GTX 1080-Ti.

As a paradigm example, we first implemented a 5-oscillator Kuramoto model. The following natural frequencies were used for the experiment in Figure 1:

For the additional oscillator used for control, we simply chose

The upper and lower bounds of interaction strength were chosen by

where di,j is a correction constant. If di,j≡1 for all i,j, the system is already synchronized in general as all entries of the interaction strength ai,j are large enough. Hence, we introduced the correction parameter di,j such that

Next, we conducted numerical simulations with a larger number of oscillators, N=9, in which case the number of possible experiments increases to (92)=36. We used the following natural frequencies:

We set the natural frequency of the additional oscillator to

To start with a non-synchronized model, we selected sufficiently large natural frequencies for w8 and w9. The upper and lower bounds of the interaction strengths were set to

where di,j is the correction parameter and that was empirically determined as in the previous example. Figure 2 shows the simulation results, which clearly demonstrate that the MOCU-based experimental design results in the most efficient updates among all three methods. Here we considered up to 18 updates (out of 36 experiments in total). As shown in Figure 2, the MOCU-based OED was able to drastically reduce uncertainty with a single update, and it reached the minimum uncertainty level just in 9 updates.

As shown in our results, designing effective experiments for complex uncertain systems requires quantifying the state of our current knowledge of the system and measuring the impact of the remaining uncertainty on the operator performance. It is clear that we cannot expect system-agnostic black-box optimization schemes to perform well. Furthermore, experiments that aim to enhance our knowledge regarding parameters with the largest uncertainties do not necessarily help, as they may not be pertinent to the operator performance. Our work shows that the MOCU-based OED framework can effectively prioritize the experiments in the design space by quantifying the impact of their potential outcomes on the operational goal using scientific knowledge as in Theorem 1.