In this work, we investigate the numerical approximation of the second order non-autonomous semilnear parabolic partial differential equation (PDE) using the finite element method. To the best of our knowledge, only the linear case is investigated in the literature. Using an approach based on evolution operator depending on two parameters, we obtain the error estimate of the scheme toward the mild solution of the PDE under polynomial growth condition of the nonlinearity. Our convergence rate are obtain for smooth and non-smooth initial data and is similar to that of the autonomous case. Our convergence result for smooth initial data is very important in numerical analysis. For instance, it is one step forward in approximating non-autonomous stochastic partial differential equations by the finite element method. In addition, we provide realistic conditions on the nonlinearity, appropriated to achieve optimal convergence rate without logarithmic reduction by exploiting the smooth properties of the two parameters evolution operator. 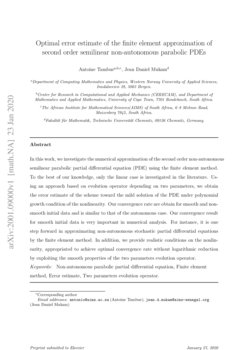 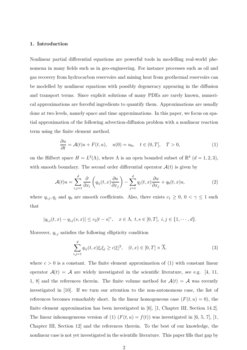 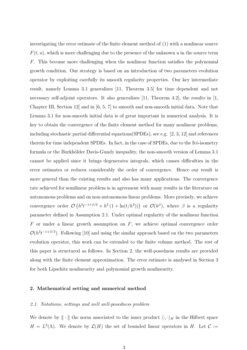 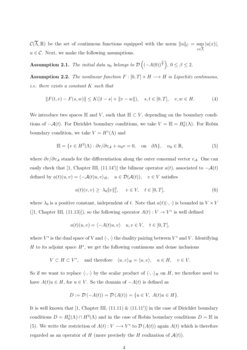 Nonlinear partial differential equations are powerful tools in modelling real-world phenomena in many fields such as in geo-engineering. For instance processes such as oil and gas recovery from hydrocarbon reservoirs and mining heat from geothermal reservoirs can be modelled by nonlinear equations with possibly degeneracy appearing in the diffusion and transport terms. Since explicit solutions of many PDEs are rarely known, numerical approximations are forceful ingredients to quantify them. Approximations are usually done at two levels, namely space and time approximations. In this paper, we focus on spatial approximation of the following advection-diffusion problem with a nonlinear reaction term using the finite element method.

on the Hilbert space H=L2(Λ), where Λ is an open bounded subset of Rd (d=1,2,3), with smooth boundary. The second order differential operator A(t) is given by

where c>0 is a constant. The finite element approximation of (1) with constant linear operator A(t)=A are widely investigated in the scientific literature, see e.g. Stig2 ; Thomee2 ; Suzuki ; Antjd2 and the references therein. The finite volume method for A(t)=A was recently investigated in Tambueseul . If we turn our attention to the non-autonomous case, the list of references becomes remarkably short. In the linear homogeneous case (F(t,u)=0), the finite element approximation has been investigated in Luskin , (Suzuki, , Chapter III, Section 14.2). The linear inhomogeneous version of (1) (F(t,u)=f(t)) was investigated in Luskin ; Dimitri ; Thomee1 , (Suzuki, , Chapter III, Section 12) and the references therein. To the best of our knowledge, the nonlinear case is not yet investigated in the scientific literature. This paper fills that gap by investigating the error estimate of the finite element method of (1) with a nonlinear source F(t,u), which is more challenging due to the presence of the unknown u in the source term F. This become more challenging when the nonlinear function satisfies the polynomial growth condition. Our strategy is based on an introduction of two parameters evolution operator by exploiting carefully its smooth regularity properties. Our key intermediate result, namely Lemma 3.1 generalizes (Thomee2, , Theorem 3.5) for time dependent and not necessary self-adjoint operators. It also generalizes (Thomee2, , Theorem 4.2), the results in (Suzuki, , Chapter III, Section 12) and in Luskin ; Dimitri ; Thomee1 to smooth and non-smooth initial data. Note that Lemma 3.1 for non-smooth initial data is of great important in numerical analysis. It is key to obtain the convergence of the finite element method for many nonlinear problems, including stochastic partial differential equations(SPDEs), see e.g. Kovcas ; Kruse1 ; Xiaojie2 and references therein for time independent SPDEs. In fact, in the case of SPDEs, due to the Itô-isometry formula or the Burkhölder Davis-Gundy inequality, the non-smooth version of Lemma 3.1 cannot be applied since it brings degenerates integrals, which causes difficulties in the error estimates or reduces considerably the order of convergence. Hence our result is more general than the existing results and also has many applications. The convergence rate achieved for semilinear problem is in agreement with many results in the literature on autonomous problems and on non-autonomous linear problems. More precisely, we achieve convergence order O(h2t−1+β/2+h2(1+ln(t/h2))) or O(hβ), where β is a regularity parameter defined in Assumption 2.1. Under optimal regularity of the nonlinear function F or under a linear growth assumption on F, we achieve optimal convergence order O(h2t−1+β/2). Following Tambueseul and using the similar approach based on the two parameters evolution operator, this work can be extended to the finite volume method. The rest of this paper is structured as follows. In Section 2, the well-posedness results are provided along with the finite element approximation. The error estimate is analysed in Section 3 for both Lipschitz nonlinearity and polynomial growth nonlinearity.

We denote by ∥⋅∥ the norm associated to the inner product ⟨⋅,⋅⟩H in the Hilbert space H=L2(Λ). We denote by L(H) the set of bounded linear operators in H. Let C:=C(¯¯¯¯Λ,R) be the set of continuous functions equipped with the norm ∥u∥C=supx∈¯¯¯Λ|u(x)|, u∈C. Next, we make the following assumptions.

The nonlinear function F:[0,T]×H⟶H is Lipschitz continuous, i.e. there exists a constant K such that

stands for the differentiation along the outer conormal vector

where V∗ is the dual space of V and ⟨⋅,⋅⟩ the duality pairing between V∗ and V. Identifying H to its adjoint space H∗, we get the following continuous and dense inclusions

The coercivity property (6) implies that −A(t) is a positive operator and its fractional powers are well defined (Stig2 ; Suzuki ). The following equivalence of norms holds Suzuki ; Stig2

The following theorem provides the well posedness of problem (1) (or (8)).

Sobolev Let Assumption 2.2 be fulfilled. If u0∈H, then the initial value problem (1) has a unique mild solution u(t) given by

Moreover, if Assumption 2.1 is fulfilled, then the following space regularity holds 111This estimate also holds when u is replaced by its semi-discrete version uh defined in Section 2.2.

Let Th be a triangulation of Λ with maximal length h. Let Vh⊂V denotes the space of continuous and piecewise linear functions over the triangulation Th. We defined the projection Ph from H=L2(Λ) to Vh by

For any t∈[0,T], the discrete operator Ah(t):Vh⟶Vh is defined by

For t∈[0,T], we introduce the Ritz projection Rh(t):V⟶Vh defined by

We consider the following linear homogeneous problem: find w∈D⊂V such that

The corresponding semi-discrete problem in space is: find wh∈Vh such that

The following lemma will be useful in our convergence analysis.

Let r∈[0,2] and γ≤r. Let Assumption 2.2 be fulfilled. Then the following error estimate holds for the semi-discrete approximation (20)

Proof. We split the desired error as follows

One can easily compute the following derivatives

Note that the solution of (19) can be represented as follows.

Therefore it holds that

3.2 Error estimate of the semilinear problem under global Lipschitz condition

Let Assumptions 2.1 and 2.2 be fulfilled. Let u(t) and uh(t) be defined by (9) and (17) respectively. Then the following error estimate holds

If in addition the nonlinearity F satisfies the linear growth condition ∥F(t,v)∥≤C∥v∥ or if there exists δ>0 small enough such that ∥(−A(s))δF(t,v)∥≤Ct+C∥(−A(s))δv∥, s,t∈[0,T], v∈H, then the following optimal error estimate holds

where β is defined in Assumption 2.1.

Note that the hypothesis ∥F(t,v)∥≤C∥v∥ is not too restrictive. An example of class of nonlinearities for which such hypothesis is fulfilled is a class of functions satisfying F(t,0)=0, t∈[0,T]. Concrete examples are operators of the form F(t,v)=f(t)v1+|v|, with f:[0,T]⟶R continuous or bounded on [0,T].

It is possible to obtain an error estimate without irregularities terms of the form t−1+β/2 with a drawback that the convergence rate will not be 2, but will depend on the regularity of the initial data. The proof follows the same lines as that of Theorem 3.1 using Lemma 3.1 and this yields

Proof. of Theorem 3.1. We start with the proof of (41). Subtracting (17) form (9), taking the norm in both sides and using triangle inequality yields

Hence the new estimate of I1 is given below

3.3 Error estimate of the semilinear problem under polynomial growth condition

In this section, we take β∈(d2,2]. We make the following assumptions on the nonlinearity.

there exist two constants and L1,c1∈[0,∞) such that the nonlinear function F satisfies the following

It is a classical solution that under Assumption 3.1 (8) has a unique mild solution u satisfying333This remains true if u is replaced by its discrete version uh. u∈C([0,T],D((−A(0))β)), see e.g. Sobolev . Hence using the Sobolev embbeding (51), it holds that

Let u(t) and uh(t) be solution of (8) and (13) respectively. Let Assumptions 2.1 and 3.1 be fulfilled. Then the following error estimate holds

If in addition there exists c1,c2≥0 such that the nonlinearity F satisfies the polynomial growth condition

Proof. The proof goes along the same lines as that of Theorem 3.1 by using appropriately Assumption 3.1 and (52).

It is possible in Theorem 3.2 to obtain convergence estimate without irregularities terms t−1+β/2. But the convergence rate will depend on the regularity of the initial data and will be of the form

Let φ:R⟶R be polynomial of any order. The nonlinear operator F is defined as the Nemytskii operator

is a concrete example satisfying Assumption 3.1.

In fact, let us assume without loss of generality that φ is polynomial of degree l>1, that is