In this paper, we consider the error analysis of a conservative Fourier pseudo-spectral method that conserves mass and energy for the space fractional nonlinear Schrödinger equation. We give a new fractional Sobolev norm that can construct the discrete fractional Sobolev space, and we also can prove some important lemmas for the new fractional Sobolev norm. Based on these lemmas and energy method, a priori error estimate for the method can be established. Then, we are able to prove that the Fourier pseudo-spectral method is unconditionally convergent with order O(τ^2+N^α/2-r) in the discrete L^∞ norm, where τ is the time step and N is the number of collocation points used in the spectral method. Numerical examples are presented to verify the theoretical analysis. 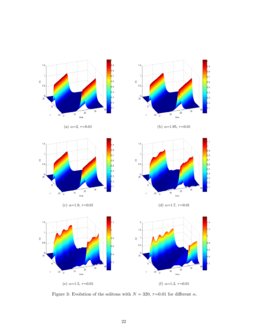 with the periodic boundary condition

and the initial condition

When α=2, the equation (1.1) reduces to the classical nonlinear Schrödinger (NLS) equation. Due to self-adjoint property of the fractional Laplacian, the solution of (???)-(???) satisfies the following mass and energy conservation laws:

Various numerical methods have been developed in the literatures for the space FNLS equation, including finite difference methods [29, 28, 36, 33, 30], finite element methods [20, 19], spectral methods [34, 2]. In the past few decades, structure-preserving methods which can inherit the intrinsic geometric properties of the given dynamical system have attracted a lot of interest due to the superior properties in long time numerical simulation over traditional methods. For more details, readers can refer to [8, 11, 18]. Recently, structure-preserving numerical methods have been extended to solve the space FNLS equation. For example, in [28], Wang et al. first constructed a mass conservative Crank-Nicolson difference scheme, and they further proposed a linearly implicit difference scheme that conserves mass and energy in [29]. In [30, 33], the modified mass and energy conservative Crank-Nicolson difference schemes were presented. Other works related to the conservative method can be founded in [24, 20].

The rest of the paper is organized as following. In section 2, we construct the discrete fractional Sobolev space by introducing a new fractional Sobolev norm and we also prove some important lemmas for the new fractional Sobolev norm. In section 3, a conservative Fourier pseudo-spectral scheme for the FNLS equation is given, we show the numerical scheme satisfies discrete conservation laws and obtain a priori estimate. In section 4, the convergence property of the scheme is analyzed. Subsequently in section 5, we carry out some numerical experiments to confirm our theoretical results and show the efficiency of the scheme. Finally, we give a conclusion in section 6.

Let N be an even integer, we define step size in space: h=L/N. Then, the spatial grid points are defined as follows: Ωh={xj=a+jh,j=0,1,…,N}. For any positive integer Nt, we define the time-step: τ=T/Nt. Then grid points in space and time are given by Ωhτ=Ωh×Ωτ, where Ωτ={tn=nτ,n=0,1,…,Nt}. For a grid function u={unj|(xj,tn)∈Ωhτ}, we introduce the following notations:

Let Vh={u|u=(uj),xj∈Ωh} be the space of grid functions defined on Ωh. For any grid function u,v∈Vh, we define the discrete inner product and associated L2 norm

We also define the discrete Lp norm as

and the discrete L∞ norm as

We define a function space SN by

where gj(x) is a trigonometric polynomial defined by

Then, we define the interpolation operator

and ˆuN2=ˆu−N2 for k=N2. Therefore we have the inverse transformation

Given a constant σ∈[0,1], we define the discrete fractional Sobolev norm ∥⋅∥Hσh and semi-norm |⋅|Hσh as

Clearly, ∥u∥2Hσh=∥u∥2h+|u|2Hσh,∥u∥2H0h=∥u∥2h. We can easily prove that the discrete Sobolev spaces is the normed linear spaces according to the norm ∥u∥Hσh defined in (???). Next, we introduce the following lemmas, which are important for unconditional convergence analysis of the conservative Fourier pseudo-spectral method.

(Discrete uniform Sobolev inequality). For any 12<σ≤1, there exists a constant C=C(σ)>0 independent of h>0 such that

Proof. From the inverse transformation (???) and the Cauchy-Schwarz inequality, we obtain

Proof. From the definition of ∥u∥Hσ0h and the Hölder’s inequality, we have

Proof. From the inverse transformation (???), we have

Then using the Riesz-Thorin Interpolation theorem (see Theorem 8.6 in [5, page 316]), we can obtain the conclusion.

Applying the fractional Laplacian (−Δ)α2 to the interpolated function (???) yields

For U∈Vh,  we define a discrete fractional Laplacian (−Δ)α2d by

By using the notation of the discrete Fourier transform and its inverse:

the discrete fractional Laplacian can be expressed as

where Λα=diag(d−N2,d−(N2−1),…,0,1,…,dN2−1). Next, we give several lemmas that show the relationship between discrete fractional Soboolv semi-norm and fractional Laplacian.

For any grid function u∈Vh, we have

For any two grid functions u,v∈Vh, we have

For any two grid functions u,v∈Vh, we have

For simplicity, we denote unj=u(xj,tn) and Unj as the exact value of u(x,t) and its numerical approximation at (xj,tn), respectively.

3 Solution existence and conservation of the scheme

We discretize the FNLS equation (???)-(???) using the Fourier pseudo-spectral method in space and the Crank-Nicolson method in time to arrive at a fully discrete system:

For the approximation Un∈Vh, there exist identities:

According to Lemma 2.5 and Lemma 2.6, we can get the results immediately. Here “Im(s)”and “Re(s)”mean taking the imaginary part and real part of a complex number s, respectively.

The scheme (???) is conservative in the sense that

Proof. Computing the discrete inner product of (???) with Un+1/2, then taking the imaginary part, we obtain

Computing the discrete inner product of (???) with δ+tUn, then taking the real part, we obtain

Then numerical solution of scheme (???) is bounded in the following sense

where C1,C2,C3 are some positive constants.

where ε is any arbitrary positive constant. Combing the second term of (???) with (???), the energy conservation (???) imply

Thus the proof is completed.

The nonlinear equation system in scheme (???) is solvable.

Proof. The argument of the existence for the solution relies on the Browder fixed point theorem (see [1, 11]). Here we omit the proof for brevity.

4 Convergence of the scheme

In this section, we will establish error estimate of (???) in the discrete L∞ norm. For simplicity, we let Ω=[0,2π] and assume that C∞p(Ω) is a set of infinitely differentiable functions with 2π-period defined on Ω. Hrp(Ω) is the closure of C∞p(Ω) in Hr(Ω). The semi-norm and the norm of Hrp(Ω) are denoted by |⋅| and ∥⋅∥r, respectively. For the given even N, we introduce the projection space

and the interpolation space

It is clear that <span aria-