We consider minimax-optimal designs for the prediction of individual parameters in random coefficient regression models. We focus on the minimax-criterion, which minimizes the "worst case" for the basic criterion with respect to the covariance matrix of random effects. We discuss particular models: linear and quadratic regression, in detail. 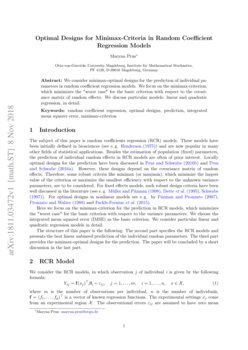 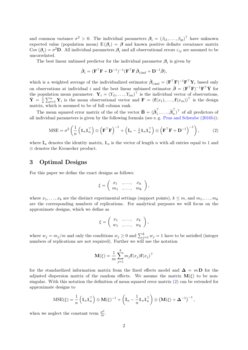 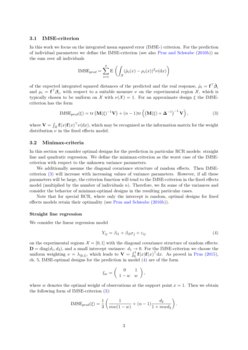 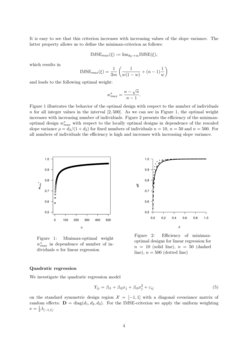 Various Optimality Criteria for the Prediction of Individual Response Curves

We consider optimal designs for the Kiefer cirteria, which include the E...
Maryna Prus, et al. ∙

Estimation of Conditional Mean Operator under the Bandable Covariance Structure

This work studies an experimental design problem where the values of a p...
David Azriel, et al. ∙

The subject of this paper is random coefficients regression (RCR) models. These models have been initially defined in biosciences (see e. g. Henderson (1975)

) and are now popular in many other fields of statistical applications. Besides the estimation of population (fixed) parameters, the prediction of individual random effects in RCR models are often of prior interest. Locally optimal designs for the prediction have been discussed in

. However, these designs depend on the covariance matrix of random effects. Therefore, some robust criteria like minimax (or maximin), which minimize the largest value of the criterion or maximize the smallest efficiency with respect to the unknown variance parameters, are to be considered. For fixed effects models, such robust design criteria have been well discussed in the literature (see e. g.

Here we focus on the minimax-criterion for the prediction in RCR models, which minimizes the "worst case" for the basic criterion with respect to the variance parameters. We choose the integrated mean squared error (IMSE) as the basic criterion. We consider particular linear and quadratic regression models in detail.

The structure of this paper is the following: The second part specifies the RCR models and presents the best linear unbiased prediction of the individual random parameters. The third part provides the minimax-optimal designs for the prediction. The paper will be concluded by a short discussion in the last part.

We consider the RCR models, in which observation j of individual i is given by the following formula:

is a vector of known regression functions. The experimental settings

which is a weighted average of the individualized estimator ^\boldmath{β}i;ind=(F⊤F)−1F⊤Yi based only on observations at individual i

and the best linear unbiased estimator

^\boldmath{β}=(F⊤F)−1F⊤¯Y for the population mean parameter. Yi=(Yi1,…,Yim)⊤ is the individual vector of observations, ¯Y=1n∑ni=1Yi is the mean observational vector and F=(f(x1),…,f(xm))⊤ is the design matrix, which is assumed to be of full column rank.

The mean squared error matrix of the of the vector ^B=(^\boldmath{β}⊤1,…,^% \boldmath{β}⊤n)⊤ of all predictors of all individual parameters is given by the following formula (see e. g. Prus and Schwabe (2016b)):

1n is the vector of length n with all entries equal to 1 and ⊗ denotes the Kronecker product.

For this paper we define the exact designs as follows:

where x1,…,xk are the distinct experimental settings (support points), k≤m, and m1,…,mk are the corresponding numbers of replications. For analytical purposes we will focus on the approximate designs, which we define as

where wj=mj/m and only the conditions wj≥0 and ∑kj=1wj=1 have to be satisfied (integer numbers of replications are not required). Further we will use the notation

for the standardized information matrix from the fixed effects model and \boldmath{Δ}=mD for the adjusted dispersion matrix of the random effects. We assume the matrix M(ξ) to be non-singular. With this notation the definition of mean squared error matrix (2) can be extended for approximate designs to

when we neglect the constant term σ2m.

In this work we focus on the integrated mean squared error (IMSE-) criterion. For the prediction of individual parameters we define the IMSE-criterion (see also Prus and Schwabe (2016b)) as the sum over all individuals

of the expected integrated squared distances of the predicted and the real response, ^μi=f⊤^\boldmath{β}i and μi=f⊤\boldmath{β}i, with respect to a suitable measure ν on the experimental region X, which is typically chosen to be uniform on X with ν(X)=1. For an approximate design ξ the IMSE-criterion has the form

where V=∫Xf(x)f(x)⊤ν(dx), which may be recognized as the information matrix for the weight distribution ν in the fixed effects model.

In this section we consider optimal designs for the prediction in particular RCR models: straight line and quadratic regression. We define the minimax-criterion as the worst case of the IMSE-criterion with respect to the unknown variance parameters.

We additionally assume the diagonal covariance structure of random effects. Then IMSE-criterion (3) will increase with increasing values of variance parameters. However, if all these parameters will be large, the criterion function will tend to the IMSE-criterion in the fixed effects model (multiplied by the number of individuals n). Therefore, we fix some of the variances and consider the behavior of minimax-optimal designs in the resulting particular cases.

Note that for special RCR, where only the intercept is random, optimal designs for fixed effects models retain their optimality (see Prus and Schwabe (2016b)).

We consider the linear regression model

on the experimental regions X=[0,1] with the diagonal covariance structure of random effects: D=diag(d1,d2), and a small intercept variance: d1→0. For the IMSE-criterion we choose the uniform weighting ν=λ[0,1], which leads to V=∫10f(x)f(x)⊤dx. As proved in Prus (2015), ch. 5, IMSE-optimal designs for the prediction in model (4) are of the form

where w denotes the optimal weight of observations at the support point x=1. Then we obtain the following form of IMSE-criterion (3):

It is easy to see that this criterion increases with increasing values of the slope variance. The latter property allows us to define the minimax-criterion as follows:

and leads to the following optimal weight:

We investigate the quadratic regression model

on the standard symmetric design region X=[−1,1] with a diagonal covariance matrix of random effects: D=diag(d1,d2,d3). For the IMSE-criterion we apply the uniform weighting ν=12λ[−1,1].

Because of its complexity, the general form of the IMSE-criterion for the quadratic regression will not be presented here. As it was mentioned at the beginning of this section, the IMSE-criterion increases with increasing variances. Hence, we will fix some of the variances by small values and consider minimax-criteria for the resulting particular cases.

If both the intercept and the slope variances are small, the worst case of the IMSE-criterion is given by its limiting value (d3→∞). We define, therefore, the minimax-criterion in this case as

which leads to the optimal design

Figure 3 illustrates the behavior of the optimal weight with respect to the number of individuals n.

If both variances of the intercept and of the coefficient of the quadratic term are small, the minimax-criterion can be defined as

If only the variance of the coefficient of the quadratic term is small, we obtain the following worst case of the IMSE-criterion:

For both cases 2 and 3 we receive the following optimal weight of the observations at the support point 1:

which is described by Figure 4.

If only the slope variance is small, we determine the minimax-criterion as the limiting value

of the IMSE-criterion. The resulting optimal weight is given by the following formula:

For small intercept variance the minimax-criterion can be defined as

which leads to the minimax-optimal weight

The behaviors of the optimal designs in cases 4 and 5 are illustrated by Figures 5 and 6, respectively.

As we can see on the graphics, the optimal weights increase with increasing number of individuals n in cases 1, 2, 3 and 5 and decrease in case 4. For cases 1 and 2 we consider the efficiency of the minimax-optimal designs with respect to the locally optimal designs in dependence of the rescaled variances ρ=d3/(1+d3) and ρ=d2/(1+d2), respectively, for fixed numbers of individuals (Figures 7 and 8).

The efficiency turns out to be high and increasing with increasing variance parameters for both cases 1 and 2 and all values of the number of individuals (n=10, n=50, n=500).

This research has been supported by grant SCHW 531/16-1 of the German Research Foundation (DFG).