In this extended abstract, we consider a dual-hop hybrid visible light communication (VLC)/radio frequency (RF) scenario where energy is harvested during the VLC transmission and used to power the relay. We formulate the optimization problem in the sense of maximizing the data rate under the assumption of decode-and-forward (DF) relaying. As the design parameters, the direct current (DC) bias and the assigned time duration for energy harvesting are taken into account. In particular, the joint optimization is split into two subproblems, which are then cyclically solved. Additional details and numerical results are left to be presented in the full paper. 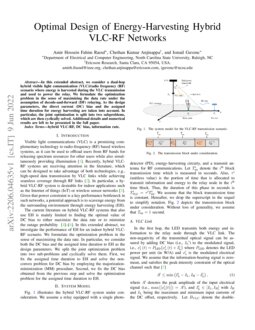 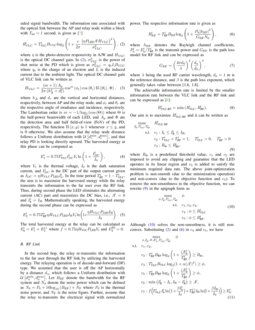 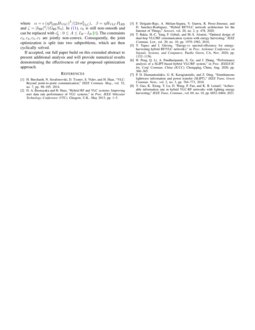 Inspired by the direct use of alternating current (AC) for computation, ...
Ha-Vu Tran, et al. ∙

Visible light communications (VLC) is a promising complementary technology to radio-frequency (RF) based wireless systems, as it can be used to offload users from RF bands for releasing spectrum resources for other users while also simultaneously providing illumination [burchardt2014vlc]. Recently, hybrid VLC-RF systems are receiving attention in the literature, which can be designed to take advantage of both technologies, e.g., high-speed data transmission by VLC links while achieving seamless coverage through RF links [basnayaka2015hybrid]. In particular, a hybrid VLC-RF system is desirable for indoor applications such as the Internet of things (IoT) or wireless sensor networks[delgado2020hybrid]. Given that power constraint is a key performance bottleneck in such networks, a potential approach is to scavenge energy from the surrounding environment through energy harvesting (EH).

Fig. 1 illustrates the hybrid VLC-RF system under consideration. We assume a relay equipped with a single photo-detector (PD), energy-harvesting circuity, and a transmit antenna for RF communications. Let Titot denote the ith block transmission time which is measured in seconds. Also, τi (unitless value) is the portion of time that is allocated to transmit information and energy to the relay node in the ith time block. Thus, the duration of this phase in seconds is TiVLC=τiTitot. We assume that the block transmission time is constant. Hereafter, we drop the superscript in the sequel to simplify notation. Fig. 2 depicts the transmission block under consideration. Without loss of generality, we assume that Ttot=1 second.

In the first hop, the LED transmits both energy and information to the relay node through the VLC link. The non-negativity of the transmitted optical signal can be assured by adding DC bias (i.e., Ibi) to the modulated signal, i.e., xit(t)=PLED(xis(t)+Iib) where PLED denotes the LED power per unit (in W/A) and xis is the modulated electrical signal. We assume that the information-bearing signal is zero-mean, and satisfies the peak-intensity constraint of the optical channel such that [1]

where Ai denotes the peak amplitude of the input electrical signal (i.e., max(∣∣xis(t)∣∣)=Ai), and Iib∈[IL,IH] with IH and IL being the maximum and minimum input currents of the DC offset, respectively.

Let BVLC denote the double-sided signal bandwidth. The information rate associated with the optical link between the AP and relay node within a block with Ttot=1 second, is given as [1]

where hΔ and dr are the vertical and horizontal distances, respectively, between AP and the relay node, and ϕr and θr are the respective angle of irradiance and incidence, respectively. The Lambertian order is m=−1/−1log2(cos(Θ))log2(cos(Θ)) where Θ is the half-power beamwidth of each LED, and Ap and Φ are the detection area and half field-of-view (FoV) of the PD, respectively. The function Π(x,y) is 1 whenever x≤y

, and is 0 otherwise. We also assume that the relay node distance follows a Uniform distribution with

U[dminr,dmaxr], and that relay PD is looking directly upward. The harvested energy at this phase can be computed as

where Vt is the thermal voltage, I0 is the dark saturation current, and IiDC is the DC part of the output current given as IDC=ηHVLCPLEDIib. In the time period TiRF=1−TiVLC, the aim is to maximize the harvested energy while the relay transmits the information to the far user over the RF link. Thus, during second phase the LED eliminates the alternating current (AC) part and maximizes the DC bias, i.e., Ai=0 and Iib=IH. Mathematically speaking, the harvested energy during the second phase can be expressed as

The total harvested energy at the relay can be calculated as Eih=Ei1+Ei-12 where f=0.75ηHVLCPLEDVt and E[0]2=0.

In the second hop, the relay re-transmits the information to the far user through the RF link by utilizing the harvested energy. The relaying operation is of decode-and-forward (DF) type. We assumed that the user is off the AP horizontally by a distance du, which follows a Uniform distribution with U[dminu,dmaxu]. Let BRF denote the bandwidth for the RF system and N0 denote the noise power which can be defined as N0=P0+10log10(BRF)+NF where P0 is the thermal noise power, and NF is the noise figure. Further, assume that the relay re-transmits the electrical signal with normalized power. The respective information rate is given as

where hRF denotes the Rayleigh channel coefficients, Pih=Eih/TiRF is the transmit power and GRF is the path loss model for RF link and can be expressed as

where λ being the used RF carrier wavelength, d0=1 m is the reference distance, and β is the path loss exponent, which generally takes value between [1.6, 1.8].

where Rth is a predefined threshold value, c1 and c2 are imposed to avoid any clipping and guarantee that the LED operates in its linear region and c3 is added to satisfy the minimum required data rate. The above joint-optimization problem is non-smooth (due to the minimization operation) and non-convex (due to the objective function and c3). To remove the non-smoothness in the objective function, we can rewrite (9) in the epigraph form as

where α=e(ηPLEDHVLC)2/(2πσ2VLC), β=ηHVLCPLED and ζ=|hRF|2/(GRFN0). In (11), c6 is still non-smooth and can be replaced with c′6:0≤A≤IH−IB [guo2021achievable]. The constraints c3,c4,c5,c7 are jointly non-convex. Consequently, the joint optimization is split into two subproblems, which are then cyclically solved.

If accepted, our full paper build on this extended abstract to present additional analysis and will provide numerical results demonstrating the effectiveness of our proposed optimization approach.