Optimal Design in Hierarchical Models with application in Multi-center Trials

Hierarchical random effect models are used for different purposes in clinical research and other areas. In general, the main focus is on population parameters related to the expected treatment effects or group differences among all units of an upper level (e.g. subjects in many settings). Optimal design for estimation of population parameters are well established for many models. However, optimal designs for the prediction for the individual units may be different. Several settings are identiffed in which individual prediction may be of interest. In this paper we determine optimal designs for the individual predictions, e.g. in multi-center trials, and compare them to a conventional balanced design with respect to treatment allocation. Our investigations show, that balanced designs are far from optimal if the treatment effects vary strongly as compared to the residual error and more subjects should be recruited to the active (new) treatment in multi-center trials. Nevertheless, effciency loss may be limited resulting in a moderate sample size increase when individual predictions are foreseen with a balanced allocation. 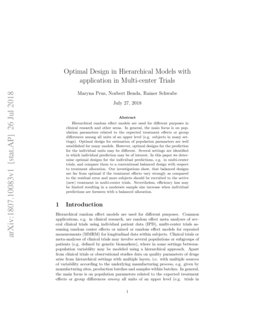 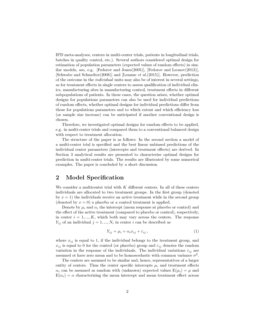 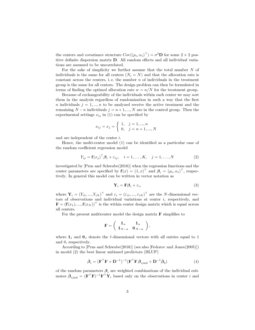 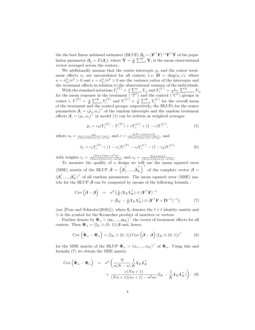 The partial effectiveness of drugs is of importance to the pharmaceutica...
Daria Rukina, et al. ∙

Hierarchical random effect models are used for different purposes. Common applications, e.g. in clinical research, are random effect meta analyses of several clinical trials using individual patient data (IPD), multi-center trials assuming random center effects or mixed or random effect models for repeated measurements (MMRM) for longitudinal data within subjects. Clinical trials or meta-analyses of clinical trials may involve several populations or subgroups of patients (e.g. defined by genetic biomarkers), where in some settings between-population variability may be modeled using a hierarchical approach. Apart from clinical trials or observational studies data on quality parameters of drugs arise from hierarchical settings with multiple layers, i.e. with multiple sources of variability according to the underlying manufacturing process, e.g. given by manufacturing sites, production batches and samples within batches. In general, the main focus is on population parameters related to the expected treatment effects or group differences among all units of an upper level (e.g. trials in IPD meta-analyses, centers in multi-center trials, patients in longitudinal trials, batches in quality control, etc.). Several authors considered optimal design for estimation of population parameters (expected values of random effects) in similar models, see, e.g. [Fedorov and Jones(2005)], [Fedorov and Leonov(2013)], [Schwabe and Schmelter(2008)] and [Lemme et al.(2015)]. However, prediction of the outcome in the individual units may also be of interest in several settings, as for treatment effects in single centers to assess qualification of individual clinics, manufacturing sites in manufacturing control, treatment effects in different subpopulations of patients. In these cases, the question arises, whether optimal designs for populations parameters can also be used for individual predictions of random effects, whether optimal designs for individual predictions differ from those for populations parameters and to which extent and which efficiency loss (or sample size increase) can be anticipated if another conventional design is chosen.

Therefore, we investigated optimal designs for random effects to be applied, e.g. in multi-center trials and compared them to a conventional balanced design with respect to treatment allocation.

The structure of the paper is as follows: In the second section a model of a multi-center trial is specified and the best linear unbiased predictions of the individual center parameters (intercepts and treatment effects) are derived. In Section 3 analytical results are presented to characterize optimal designs for prediction in multi-center trials. The results are illustrated by some numerical examples. The paper is concluded by a short discussion.

The centers are assumed to be similar and, hence, representatives of a larger entity of centers. Thus the center specific intercepts μi and treatment effects αi can be assumed as random with (unknown) expected values E(μi)=μ and E(αi)=α characterizing the mean intercept and mean treatment effect across the centers and covariance structure Cov((μi,αi)⊤)=σ2D for some 2×2 positive definite dispersion matrix D. All random effects and all individual variations are assumed to be uncorrelated.

For the sake of simplicity we further assume that the total number N of individuals is the same for all centers (Ni=N) and that the allocation rate is constant across the centers, i. e. the number n of individuals in the treatment group is the same for all centers. The design problem can then be formulated in terms of finding the optimal allocation rate w=n/N for the treatment group.

Because of exchangeability of the individuals within each center we may sort them in the analysis regardless of randomization in such a way that the first n individuals j=1,...,n to be analyzed receive the active treatment and the remaining N−n individuals j=n+1,...,N are in the control group. Then the experimental settings xij in (1) can be specified by

and are independent of the center i.

Hence, the multi-center model (1) can be identified as a particular case of the random coefficient regression model

investigated by [Prus and Schwabe(2016)] when the regression functions and the center parameters are specified by f(x)=(1,x)⊤ and \boldmath{β}i=(μi,αi)⊤

, respectively. In general this model can be written in vector notation as

where Yi=(Yi1,...,YiN)⊤ and εi=(εi1,...,εiN)⊤ are the N-dimensional vectors of observations and individual variations at center i, respectively, and F=(f(x1),...,f(xN))⊤ is the within center design matrix which is equal across all centers.

For the present multicenter model the design matrix F simplifies to

where 1ℓ and 0ℓ denote the ℓ-dimensional vectors with all entries equal to 1 and 0, respectively.

of the random parameters \boldmath{β}i are weighted combinations of the individual estimates ^\boldmath{β}i;ind=(F⊤F)−1F⊤Yi based only on the observations in center i

and the the best linear unbiased estimator (BLUE)

^\boldmath{β}0=(F⊤F)−1F⊤¯Y of the population parameter \boldmath{β}0=E(\boldmath{β}i), where ¯Y=1K∑Ki=1Yi is the mean observational vector averaged across the centers..

With the standard notations Y(T)i⋅=1n∑nj=1Yij and Y(C)i⋅=1N−n∑Nj=n+1Yij for the mean response in the treatment (“T”) and the control (“C”) groups in center i, Y(T)⋅⋅=1K∑Ki=1Y(T)i⋅ and Y(C)⋅⋅=1K∑Ki=1Y(C)i⋅ for the overall mean of the treatment and the control groups, respectively, the BLUPs for the center parameters ^\boldmath{β}i=(^μi,^αi)⊤ of the random intercepts and the random treatment effects \boldmath{β}i=(μi,αi)⊤ in model (1) can be written as weighted averages

(see [Prus and Schwabe(2016)]), where Iℓ denotes the ℓ×ℓidentity matrix and ⊗ is the symbol for the Kronecker product of matrices or vectors.

by the allocation numbers n and N−n to the treatment and control group T and C, respectively.

For analytical purposes, we generalize this to the definition of an approximate design:

For an approximate design the definition of the MSE matrix (9) of the BLUP ^\boldmath{Ψ}α is extended in a straightforward manner an can be rewritten (neglecting σ2) as :

in terms of the allocation rate w. The approach of approximate designs seems in so far to be appropriate as the total number N of individuals in each center should be sufficiently large. Otherwise optimal exact designs have to be obtained by adequate rounding of w∗ to a multiple of 1/N (see below).

for the criterion function Φα in terms of the allocation rate w. Because, in general, there is no explicit solution for the optimal allocation rate, which minimizes (13), we will give an insight in the qualitative behavior by some numerical example below.

It is worth-while mentioning that the criterion (13) is convex and, therefore, an optimal exact design may be obtained by choosing the best of two exact designs adjacent to an optimal approximate design.

Finally, Figures 3 and 4 present the efficiency of the equal allocation rate w0=0.5 which is optimal in the fixed effects model (u=v=0). The efficiency for the A-criterion (A-efficiency) has been computed using the standard formula

Figures 7 and 8 presents the efficiency of the equal allocation rate w0=0.5 which is optimal in the fixed effects model. The efficiency is more sensible with respect to the variance ratio in the case K=100 and N=5 than for K=50 and N=10.

As illustrated in the example, the larger the between-unit (between-trial) variability of the treatment effects the more the optimal weight deviates from equal allocation, especially if the variance of the units’ intercepts is small. An increasing heterogeneity in the treatment effect leads to a decreased precision of the design that is optimal for population parameters: A balanced design is far from optimal if the treatment effects vary strongly as compared to the residual error and more subjects should be recruited to the active (new) treatment in multi-center trials. Nevertheless, it appears reassuring to the clinical trial practitioner that the efficiency loss may be limited as in the example resulting in a total sample size increase of about 10 - 20 % in the considered scenarios if individual predictions are foreseen with a balanced allocation. Usually, between-unit variability of treatment effects are considered to be rather small, indicating that equal allocation may suffice. However, using the results given in the paper, specific settings with different expectations can be assessed properly, in order to make optimally use of a limited number of patients or sample units to predict random effects of individual units.