Optimal Algorithm to Reconstruct a Tree from a Subtree Distance 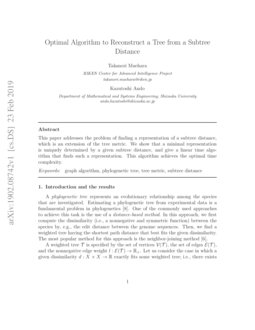 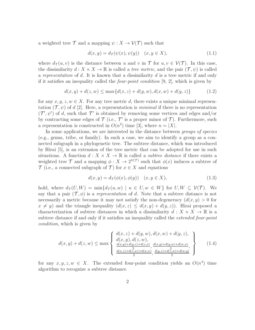 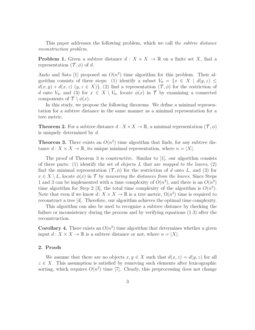 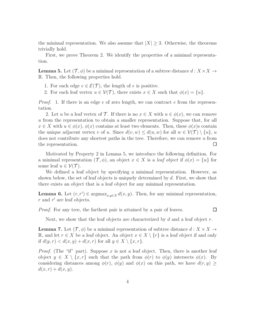 1 Introduction and the results

represents an evolutionary relationship among the species that are investigated. Estimating a phylogenetic tree from experimental data is a fundamental problem in phylogenetics

wiley2011phylogenetics . One of the commonly used approaches to achieve this task is the use of a distance-based method. In this approach, we first compute the dissimilarity (i.e., a nonnegative and symmetric function) between the species by, e.g., the edit distance between the genome sequences. Then, we find a weighted tree having the shortest path distance that best fits the given dissimilarity. The most popular method for this approach is the neighbor-joining method saitou1987neighbor .

A weighted tree T is specified by the set of vertices V(T), the set of edges E(T), and the nonnegative edge weight l:E(T)→R+. Let us consider the case in which a given dissimilarity d:X×X→R exactly fits some weighted tree; i.e., there exists a weighted tree T and a mapping ψ:X→V(T) such that

where dT(u,v) is the distance between u and v in T for u,v∈V(T). In this case, the dissimilarity d:X×X→R is called a tree metric, and the pair (T,ψ) is called a representation of d. It is known that a dissimilarity d is a tree metric if and only if it satisfies an inequality called the four-point condition zaretskii1965constructing ; buneman1971recovery , which is given by

In some applications, we are interested in the distance between groups of species (e.g., genus, tribe, or family). In such a case, we aim to identify a group as a connected subgraph in a phylogenetic tree. The subtree distance, which was introduced by Hirai hirai2006characterization , is an extension of the tree metric that can be adopted for use in such situations. A function d:X×X→R is called a subtree distance if there exists a weighted tree T and a mapping ϕ:X→2V(T) such that ϕ(x) induces a subtree of T (i.e., a connected subgraph of T) for x∈X and equations

hold, where dT(U,W)=min{dT(u,w)∣u∈U,w∈W} for U,W⊆V(T). We say that a pair (T,ϕ) is a representation of d. Note that a subtree distance is not necessarily a metric because it may not satisfy the non-degeneracy (d(x,y)>0 for x≠y) and the triangle inequality (d(x,z)≤d(x,y)+d(y,z)). Hirai proposed a characterization of subtree distances in which a dissimilarity d:X×X→R is a subtree distance if and only if it satisfies an inequality called the extended four-point condition, which is given by

for any x,y,z,w∈X. The extended four-point condition yields an O(n4) time algorithm to recognize a subtree distance.

This paper addresses the following problem, which we call the subtree distance reconstruction problem.

Given a subtree distance d:X×X→R on a finite set X, find a representation (T,ϕ) of d.

For a subtree distance d:X×X→R, a minimal representation (T,ϕ) is uniquely determined by d.

There exists an O(n2) time algorithm that finds, for any subtree distance d:X×X→R, its unique minimal representation, where n=|X|.

The proof of Theorem 3 is constructive. Similar to ando2017algorithm , our algorithm consists of three parts: (1) identify the set of objects L that are mapped to the leaves, (2) find the minimal representation (T,ϕ) for the restriction of d onto L, and (3) for x∈X∖L, locate ϕ(x) in T by measuring the distances from the leaves. Since Steps 1 and 3 can be implemented with a time complexity of O(n2), and there is an O(n2) time algorithm for Step 2 culberson1989fast , the total time complexity of the algorithm is O(n2). Note that even if we know d:X×X→R is a tree metric, Ω(n2) time is required to reconstruct a tree hein1989optimal . Therefore, our algorithm achieves the optimal time complexity.

This algorithm can also be used to recognize a subtree distance by checking the failure or inconsistency during the process and by verifying equations (1.3) after the reconstruction.

There exists an O(n2) time algorithm that determines whether a given input d:X×X→R is a subtree distance or not, where n=|X|.

We assume that there are no objects x,y∈X such that d(x,z)=d(y,z) for all z∈X. This assumption is satisfied by removing such elements after lexicographic sorting, which requires O(n2) time wiedermann1979complexity . Clearly, this preprocessing does not change the minimal representation. We also assume that |X|≥3. Otherwise, the theorems trivially hold.

First, we prove Theorem 2. We identify the properties of a minimal representation.

Let (T,ϕ) be a minimal representation of a subtree distance d:X×X→R. Then, the following properties hold.

1. If there is an edge e of zero length, we can contract e from the representation.

Motivated by Property 2 in Lemma 5, we introduce the following definition. For a minimal representation (T,ϕ), an object x∈X is a leaf object if ϕ(x)={u} for some leaf u∈V(T).

Let (r,r′)∈\operatornamewithlimitsargmaxx,y∈Xd(x,y). Then, for any minimal representation, r and r′ are leaf objects.

For any tree, the farthest pair is attained by a pair of leaves. ∎

Next, we show that the leaf objects are characterized by d and a leaf object r.

Since we can take a leaf object r universally by Lemma 6, and the condition in Lemma 7 is described without specifying the underlying representation, we can conclude that the set of leaf objects is uniquely determined by d. Thus, we obtain the following corollary.

Any minimal representation of a subtree distance has the same leaf objects. ∎

The remaining issue is to show that each non-leaf object x∈X∖L is uniquely located in the minimal representation (T,ϕ) of d|L. This is clear because any connected subgraph in a tree is uniquely identified by the distances from the leaves. More precisely, we obtain the following explicit representation.

For U⊆V(T), we denote by ¯¯¯¯U the subgraph of T induced by U. Note that both I(r,a;x,b) and ¯¯¯¯U are continuous objects. By using these notations, we obtain the following.

Let d:X×X→R be a subtree distance and L be the set of leaf objects. Let (T,ϕ) be the minimal representation of d|L. Fix a leaf object r∈L. Then, we have for each non-leaf object z∈X∖L

Now, we prove Theorem 3. The above proof of Theorem 2 is constructive, and it provides the following algorithm:

The authors thank Hiroshi Hirai and anonymous referees for helpful comments. This work was supported by the Japan Society for the Promotion of Science, KAKENHI Grant Number 15K00033.