Opportunity costs in the game of best choice

The game of best choice, also known as the secretary problem, is a model for sequential decision making with many variations in the literature. Notably, the classical setup assumes that the sequence of candidate rankings is uniformly distributed over time and that there is no expense associated with the candidate interviews. Here, we weight each ranking permutation according to the position of the best candidate in order to model costs incurred from conducting interviews with candidates that are ultimately not hired. We compare our weighted model with the classical (uniform) model via a limiting process. It turns out that imposing even infinitesimal costs on the interviews results in a probability of success that is about 28 classical case. 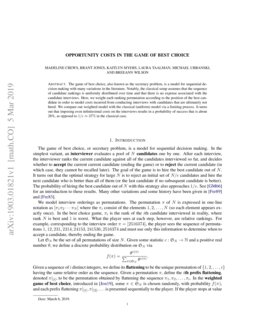 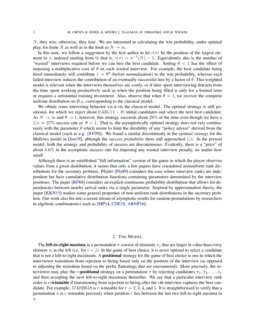 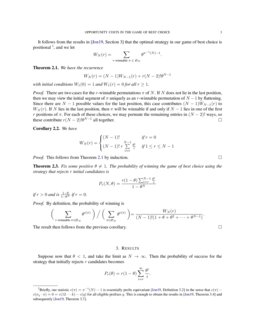 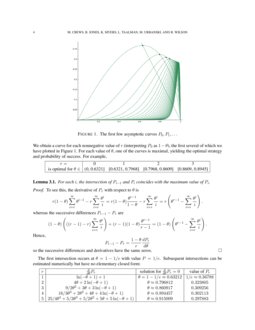 The game of best choice (also known as the secretary problem) is a model...
Brant Jones, et al. ∙

Finding the Second-Best Candidate under the Mallows Model

Bistable Probabilities: A Unified Framework for Studying Rationality and Irrationality in Classical and Quantum Games

What You See Is What You Get? The Impact of Representation Criteria on Human Bias in Hiring

In many applications, we have access to the complete dataset but are onl...
Jiawei Zhang, et al. ∙

Who Wins the Game of Thrones? How Sentiments Improve the Prediction of Candidate Choice

We model interview orderings as permutations. The permutation π of N is expressed in one-line notation as [π1π2⋯πN] where the πi consist of the elements 1,2,…,N (so each element appears exactly once). In the best choice game, πi is the rank of the ith candidate interviewed in reality, where rank N is best and 1 is worst. What the player sees at each step, however, are relative rankings. For example, corresponding to the interview order π=[2516374], the player sees the sequence of permutations 1,12,231,2314,24153,241536,2516374 and must use only this information to determine when to accept a candidate, thereby ending the game.

Let SN be the set of all permutations of size N. Given some statistic c:SN→N and a positive real number θ

, we define a discrete probability distribution on

Given a sequence of i distinct integers, we define its flattening to be the unique permutation of {1,2,…,i} having the same relative order as the sequence. Given a permutation π, define the ith prefix flattening, denoted π|[i], to be the permutation obtained by flattening the sequence π1,π2,…,πi. In the weighted game of best choice, introduced in [Jon19], some π∈SN is chosen randomly, with probability f(π), and each prefix flattening π|[1],π|[2],… is presented sequentially to the player. If the player stops at value N, they win; otherwise, they lose. We are interested in calculating the win probability, under optimal play, for finite N as well as in the limit as N→∞.

In this note, we follow a suggestion by the first author to let c(π) be the position of the largest element in π, indexed starting from 0; that is, c(π)=π−1(N)−1. Equivalently, this is the number of “wasted” interviews required before we can hire the best candidate. Setting θ<1 has the effect of imposing a multiplicative cost of θ on each wasted interview. For example, the best candidate being hired immediately will contribute 1=θ0 (before normalization) to the win probability, whereas each failed interview reduces the contribution of an eventually successful hire by a factor of θ. This weighted model is relevant when the interviews themselves are costly, or if time spent interviewing detracts from the time spent working productively such as when the position being filled is only for a limited term or requires a substantial training investment. Also, observe that when θ=1, we recover the complete uniform distribution on SN, corresponding to the classical model.

We obtain some interesting behavior vis-à-vis the classical model. The optimal strategy is still positional, for which we reject about 0.435/(1−θ) initial candidates and select the next best candidate. As N→∞ and θ→1, however, this strategy succeeds about 28% of the time even though we have a 1/e≈37% success rate at θ=1. That is, the asymptotically optimal strategy does not vary continuously with the parameter θ which seems to limit the durability of any “policy advice” derived from the classical model (such as e.g. [SV99]). We found a similar discontinuity in the optimal strategy for the Mallows model in [Jon19], although the success probability there still approached 1/e. In the present model, both the strategy and probability of success are discontinuous. Evidently, there is a “price” of about 8.6% in the asymptotic success rate for imposing any wasted interview penalty, no matter how small.

Although there is an established “full-information” version of the game in which the player observes values from a given distribution, it seems that only a few papers have considered nonuniform rank distributions for the secretary problem. Pfeifer [Pfe89]

considers the case where interview ranks are independent but have cumulative distribution functions containing parameters determined by the interview positions. The paper

[RF88] considers an explicit continuous probability distribution that allows for dependencies between nearby arrival ranks via a single parameter. Inspired by approximation theory, the paper [KKN15] studies some general properties of non-uniform rank distributions in the secretary problem. Our work also fits into a recent stream of asymptotic results for random permutations by researchers in algebraic combinatorics such as [MP14, CDE18, ABNP16].

The left-to-right maxima in a permutation π consist of elements πj that are larger in value than every element πi to the left (i.e. for i<j). In the game of best choice, it is never optimal to select a candidate that is not a left-to-right maximum. A positional strategy for the game of best choice is one in which the interviewer transitions from rejection to hiring based only on the position of the interview (as opposed to adjusting the transition based on the prefix flattenings that are encountered). More precisely, the interviewer may play the r-positional strategy on a permutation π by rejecting candidates π1,π2,…,πr and then accepting the next left-to-right maximum thereafter. We say that a particular interview rank order is r-winnable if transitioning from rejection to hiring after the rth interview captures the best candidate. For example, 574239618 is r-winnable for r=2,3,4, and 5. It is straightforward to verify that a permutation π is r-winnable precisely when position r lies between the last two left-to-right maxima in π.

We have the recurrence

This follows from Theorem 2.1 by induction. ∎

Fix some positive θ≠1. The probability of winning the game of best choice using the strategy that rejects r initial candidates is

By definition, the probability of winning is

The result then follows from the previous corollary. ∎

Suppose now that θ<1, and take the limit as N→∞. Then the probability of success for the strategy that initially rejects r candidates becomes

We obtain a curve for each nonnegative value of r (interpreting P0 as 1−θ), the first several of which we have plotted in Figure 1. For each value of θ, one of the curves is maximal, yielding the optimal strategy and probability of success. For example,

For each i, the intersection of Pi−1 and Pi coincides with the maximum value of Pi.

To see this, the derivative of Pr with respect to θ is

whereas the successive differences Pr−1−Pr are

so the successive differences and derivatives have the same zeros. ∎

. Subsequent intersections can be estimated numerically but have no elementary closed form:

Thus, the optimal strategy and probability of success is determined by P(θ)=maxr≥0Pr(θ), the maximum Pr function in the regime determined by θ. By Lemma 3.1, P(θ) is monotonically decreasing and bounded below. Hence, there is a limiting value as θ→1. However, the limit is clearly bounded away from 1/e, which is the value at θ=1 according to the classical analysis. Our goal in this section is to determine limθ→1P(θ) more precisely.

which we view as a function of a positive real variable x (see e.g. [OLBC10]). This is a standard special function implemented in many mathematical software systems.

We are now in a position to give our main result.

As θ approaches 1 from the left, the optimal strategy in our asymptotic weighted game of best choice approaches a positional strategy that rejects α1−θ initial candidates and selects the next candidate better than all of them. This strategy has a success probability of β.

We would like to optimize Pr(θ)=r(1−θ)∑∞i=rθii for large r and θ chosen appropriately close to 1. We estimate the series by viewing it as a left or right sum for the corresponding integrals:

Hence, we may approximate Pr(θ) by ˜Pr(θ)=r(1−θ)∫∞t=rθtt dt with error less than

Optimizing this function for c∈(0,∞) then determines the asymptotically optimal positional strategy (where we reject r=c1−θ initial candidates) and probability of success. ∎

We can also solve the model when θ>1. One interpretation here is that there is some “trend” in the candidate pool (e.g. due to changes in general economic conditions such as unemployment or interest rates) that is amplifying the probability of seeing the best candidate later. Once again, we find that including even an infinitesimal trend completely changes the optimal asymptotic strategy.

If θ>1, the probability of success for the strategy that initially rejects r=Nλ candidates approaches 1/λ, as N→∞. Hence, the asymptotic model does not depend on θ.

To see why, consider the “almost telescoping” sum

Thus, for large N we find that it is optimal to choose the last candidate (and win almost all of the time!), obtaining another discontinuity with the θ<1 and classical models.

Although we were unaware of it until after our work was accepted for publication, the paper [Ras75] solves a very similar problem to the one we are considering. More specifically, we compute in Theorem 2.3

N and θ, these problems are dual to each other in the sense that their corresponding formulas are off by the multiplicative constant θ+θ2+θ3+...+θNN. Since our weights form a probability distribution, we believe our model facilitates a clearer comparison with the classical secretary problem.

When 0<θ<1, Rasmussen–Pliska obtain an asymptotic estimate for the optimal strategy that agrees with ours, using different methods. They also note that, for fixed θ<1, their expected payoff tends to 0 as N tends to infinity (because their denominator does not scale with θ). By contrast, our model has nonzero probabilities, as N tends to infinity, given by the value of Pr(θ) where r is optimal for the fixed θ.

This material is based upon work supported by the National Science Foundation under Grant Number 1560151. It was initiated during the summer of 2018 at a research experience for undergraduates (REU) site at James Madison University mentored by the second and fourth authors.