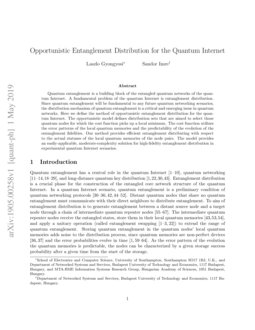 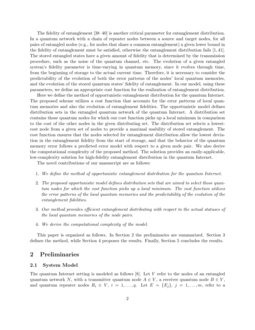 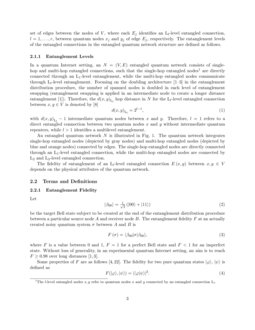 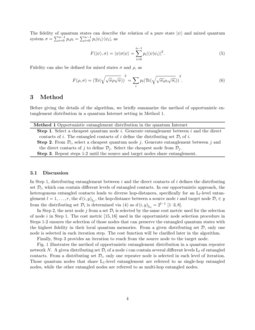 A Poisson Model for Entanglement Optimization in the Quantum Internet

A fundamental concept of the quantum Internet is quantum entanglement. I...
Laszlo Gyongyosi, et al. ∙

and the error probabilities evolve in time

[1, 59, 60, 61, 62, 63, 64]. As the error pattern of the evolution the quantum memories is predictable, the nodes can be characterized by a given storage success probability after a given time from the start of the storage.

The novel contributions of our manuscript are as follows:

This paper is organized as follows. In Section 2 the preliminaries are summarized. Section 3 defines the method, while Section 4 proposes the results. Finally, Section 5 concludes the results.

The fidelity of entanglement of an Ll-level entangled connection E(x,y) between x,y∈V depends on the physical attributes of the quantum network.

be the target Bell state subject to be created at the end of the entanglement distribution procedure between a particular source node A and receiver node B. The entanglement fidelity F at an actually created noisy quantum system σ between A and B is

where F is a value between 0 and 1, F=1 for a perfect Bell state and F<1 for an imperfect state. Without loss of generality, in an experimental quantum Internet setting, an aim is to reach F≥0.98 over long distances [1, 3].

Some properties of F are as follows [4, 22]. The fidelity for two pure quantum states |φ⟩, |ψ⟩ is defined as

The fidelity of quantum states can describe the relation of a pure state |ψ⟩ and mixed quantum system σ=∑n−1i=0piρi=∑n−1i=0pi|ψi⟩⟨ψi|, as

Fidelity can also be defined for mixed states σ and ρ, as

Before giving the details of the algorithm, we briefly summarize the method of opportunistic entanglement distribution in a quantum Internet setting in Method 1.

In Step 1, distributing entanglement between i and the direct contacts of i defines the distributing set Di, which can contain different levels of entangled contacts. In our opportunistic approach, the heterogonous entangled contacts leads to diverse hop-distances, specifically for an Ll-level entanglement l=1,…,r, the d(i,y)Ll, the hop-distance between a source node i and target node Di∈y from the distributing set Di is determined via (4) as d(i,y)Ll=2l−1 [1, 2, 3, 8].

In Step 2, the next node j from a set Di is selected by the same cost metric used for the selection of node i in Step 1. The cost metric [15, 16] used in the opportunistic node selection procedure in Steps 1-2 ensures the selection of those nodes that can preserve the entangled quantum states with the highest fidelity in their local quantum memories. From a given distributing set D, only one node is selected in each iteration step. The cost function will be clarified later in the algorithm.

Finally, Step 3 provides an iteration to reach from the source node to the target node.

Let Di be a distributing set of a node i, and let pF∗i,j be the probability of the shared entanglement stored in the quantum memories of nodes (i,j), where j∈Di identifies a repeater node Rj from the distributing set Di, with a fidelity F∗≥Fcrit, where Fcrit is a critical lower bound on the fidelity of entanglement.

Then, let pF∗i,Di be the probability that F∗≥Fcrit is satisfied between node i and at least one repeater node from Di.

Similarly, with pF∗Di,B as the probability that there exists entanglement between a node j∈Di of Di and the target node B with fidelity criterion F∗≥Fcrit, a cost function between a repeater node j∈Di and a target node B can be defined as

From equations (7) and (8), the cost function between a quantum node i and a target node B at a distributing set Di, such that F∗≥Fcrit holds for the fidelity of all entangled contacts from i to B, is therefore

Let εi,j(t0+Δt) identify the error probability of quantum memories in nodes (i,j) such that εi,j∈[0,εcrit] holds, which allows storing an F∗≥Fcrit fidelity entanglement in the nodes after Δt time from start time t0. Therefore, at a εcrit critical upper bound on the quantum memories,

holds, where ζi(t0+Δt) characterizes the change of the error probability of the quantum memory of node i at t0+Δt, as in

where ζi(t0) is the εi error probability of the quantum memory of node i at t0, while φi(t0,Δt) is the change of εi from t0 to t0+Δt.

Let ηi(t)=(εi(t),1−Fi(t)) identify the εi(t) quantum memory error probability and the Fi(t) stored entanglement fidelity in node i at time t. Then, the di,j distance between ηi and ηj in R2 identifies a di,j∈[0,dmax], where dmax is the maximal allowable distance in R2, which forms an upper bound to the distances for which pF∗i,j>0 holds, as

The fidelities Fi(t0) and Fi(t0,Δt) refer to the fidelities of stored entanglement in a node i at t0 and t0,Δt, respectively, with relation for nodes (i,j)

where Fi,j is the difference of entanglement fidelities Fi and Fj, while FΔ is an upper bound on the fidelity difference.

From equation (15), the following relation holds for pF∗i,j:

The normalized increase of distance di,j between nodes therefore yields a quantity ωi,j, ωi,j∈[0,1], which characterizes the usability of a stored entanglement in (i,j) from t0 to t0+Δt, as

For a given path P with Aδ,Uk and Bδ,Uk as the source and target nodes, respectively, associated with a demand δ of user Uk, k=1,…,K, where K is the number of users; thus, the overall usability coefficient ωAδ,Uk,Bδ,Uk for P is

To determine those quantum nodes for which both ωi,j (21) and pF∗i,j are high, a redefined cost function, ci,j, can be defined for a given (i,j) as

which assigns the lowest cost to those node pairs for which ωi,j and pF∗i,j are high.

which yields the redefined cost of equation (8) as

The total cost between i and B such that F∗≥Fcrit holds for all entangled contacts between quantum nodes i and B is therefore [15, 16]

The aim of the opportunistic entanglement distribution algorithm AO is to determine a shortest path P∗ with respect to our cost function. The shortest path P∗ contains those node pairs for which ωi,j and pF∗i,j are maximal, and therefore the resulting cost function (26) is the lowest in a quantum network N. Thus, the algorithm finds the repeater nodes for entanglement distribution by maximizing the usability of stored entanglement.

Some preliminary notations for the algorithm are as follows. Let Aδ,Uk and Bδ,Uk be the source and target nodes, respectively, associated with a demand δ of user Uk. The algorithm selects those nodes that provide the lowest cost with respect to ci,j for a given (i,j) to distribute entanglement from Aδ,Uk to Bδ,Uk. Assume that for a set S′ of nodes there exists a path to Bδ,Uk in a quantum network N=(V,S). Let ~S refer to a set of nodes for which the shortest path to Bδ,Uk is not yet determined.

The AO algorithm of the minimal-cost opportunistic entanglement distribution is detailed in Algorithm 1.

The computational complexity of the minimal-cost AO opportunistic entanglement distribution is as follows.

Let N=(V,E) be a quantum repeater network with |V| quantum nodes. Applying a L logarithmic search [17] to find a node with an actual minimal cost requires at most

Since the number of nodes is |V|, setting the final path cost for all quantum nodes requires at most

This work was partially supported by the European Research Council through the Advanced Fellow Grant, in part by the Royal Society’s Wolfson Research Merit Award, in part by the Engineering and Physical Sciences Research Council under Grant EP/L018659/1, by the Hungarian Scientific Research Fund - OTKA K-112125, and by the National Research Development and Innovation Office of Hungary (Project No. 2017-1.2.1-NKP-2017-00001), and in part by the BME Artificial Intelligence FIKP grant of EMMI (BME FIKP-MI/SC).