OpenIPDM: A Probabilistic Framework for Estimating the Deterioration and Effect of Interventions on Bridges

This paper describes OpenIPDM software for modelling the deterioration process of infrastructures using network-scale visual inspection data. In addition to the deterioration state estimates, OpenIPDM provides functions for quantifying the effect of interventions, estimating the service life of an intervention, and generating synthetic data for verification purposes. Each of the aforementioned functions are accessible by an interactive graphical user interface. OpenIPDM is designed based on the research work done on a network of bridges in Quebec province, so that the concepts presented in the software have been validated for applications in a real-world context. In addition, this software provides foundations for future developments in the subject area of modelling the deterioration as well as intervention planning. 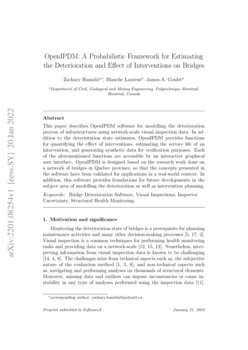 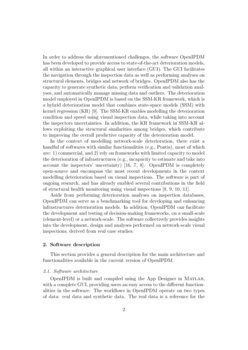 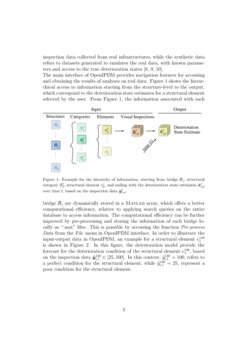 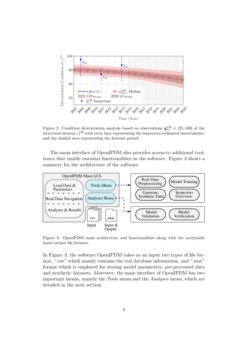 While much attention has been given to the problem of estimating the eff...
Ioana Bica, et al. ∙

The paper describes the architecture of the intelligence system for auto...
A. V. Palagin, et al. ∙

All in one stroke? Intervention Spaces for Dark Patterns

Monitoring the deterioration state of bridges is a prerequisite for planning maintenance activities and many other decision-making processes Chase et al. (2016); Zhang and Wang (2017); Allah Bukhsh et al. (2019). Visual inspection is a common techniques for performing health monitoring tasks and providing data on a network-scale Moore et al. (2001); Soetjipto et al. (2017); MTQ (2014). Nonetheless, interpreting information from visual inspection data is known to be challenging OBrien et al. (2015); Campbell et al. (2019); Hamida and Goulet (2020a). The challenges arise from technical aspects such as, the subjective nature of the evaluation method Agdas et al. (2015); Bennetts et al. (2018); Hamida and Goulet (2020a)

; and non-technical aspects such as, navigating and performing analyses on thousands of structural elements. Moreover, missing data and outliers can impose inconstancies or cause instability in any type of analyses performed using the inspection data

Hamida and Goulet (2021b). In order to address the aforementioned challenges, the software OpenIPDM has been developed to provide access to state-of-the-art deterioration models, all within an interactive graphical user interface (GUI). The GUI facilitates the navigation through the inspection data as well as performing analyses on structural elements, bridges and network of bridges. OpenIPDM also has the capacity to generate synthetic data, perform verification and validation analyses, and automatically manage missing data and outliers. The deterioration model employed in OpenIPDM is based on the SSM-KR framework, which is a hybrid deterioration model that combines state-space models (SSM) with kernel regression (KR) Hamida and Goulet (2020b). The SSM-KR enables modelling the deterioration condition and speed using visual inspection data, while taking into account the inspectors uncertainties. In addition, the KR framework in SSM-KR allows exploiting the structural similarities among bridges, which contribute to improving the overall predictive capacity of the deterioration model.

In the context of modelling network-scale deterioration, there exist a handful of softwares with similar functionalities (e.g., Pontis), most of which are: 1) commercial, and 2) rely on frameworks with limited capacity to model the deterioration of infrastructures (e.g., incapacity to estimate and take into account the inspectors’ uncertainty) Thompson and Shepard (1993); Ellis et al. (2008); Hamida and Goulet (2020a)

. OpenIPDM is completely open-source and encompass the most recent developments in the context modelling deterioration based on visual inspections. The software is part of ongoing research, and has already enabled several contributions in the field of structural health monitoring using visual inspections

Aside from performing deterioration analyses on inspection databases, OpenIPDM can serve as a benchmarking tool for developing and enhancing infrastructures deterioration models. In addition, OpenIPDM can facilitate the development and testing of decision-making frameworks, on a small-scale (element-level) or a network-scale. The software collectively provides insights into the development, design and analyses performed on network-scale visual inspections, derived from real case studies.

This section provides a general description for the main architecture and functionalities available in the current version of OpenIPDM.

OpenIPDM is built and compiled using the App Designer in Matlab, with a complete GUI, providing users an easy access to the different functionalities in the software. The workflows in OpenIPDM operate on two types of data: real data and synthetic data. The real data is a reference for the inspection data collected from real infrastructures, while the synthetic data refers to datasets generated to emulates the real data, with known parameters and access to the true deterioration states Hamida and Goulet (2020a, b, 2021a). The main interface of OpenIPDM provides navigation features for accessing and obtaining the results of analyses on real data. Figure 1 shows the hierarchical access to information starting from the structure-level to the output, which correspond to the deterioration state estimates for a structural element selected by the user.

From Figure 1, the information associated with each bridge Bj are dynamically stored in a Matlab array, which offers a better computational efficiency, relative to applying search queries on the entire database to access information. The computational efficiency can be further improved by pre-processing and storing the information of each bridge locally as .mat files. This is possible by accessing the function Pre-process Data from the File menu in OpenIPDM interface. In order to illustrate the input-output data in OpenIPDM, an example for a structural element e1301 is shown in Figure 2. In this figure, the deterioration model provide the forecast for the deterioration condition of the structural element e1301, based on the inspection data ~y130t,1∈[25,100]. In this context, ~y130t,1=100, refers to a perfect condition for the structural element, while ~y130t,1=25, represent a poor condition for the structural element.

The main interface of OpenIPDM also provides access to additional toolboxes that enable essential functionalities in the software. Figure 3 shows a summery for the architecture of the software.

In Figure 3, the software OpenIPDM takes as an input two types of file format, .csv which mainly contains the real database information, and .mat format which is employed for storing model parameters, pre-processed data and synthetic datasets. Moreover, the main interface of OpenIPDM has two important menus, namely the Tools menu and the Analyses menu, which are detailed in the next section.

This section provides an overview for the main functionalities in OpenIPDM, which are accessible through either the Tools menus or the Analyses menu.

The Analyses menu in OpenIPDM provides access to model validation and verification analyses using real and synthetic data, respectively. The toolboxes under this menu are:

In this section, an example for generating and using synthetic data is presented. The example case include three steps : 1) generating synthetic data, 2) estimating model parameters, and 3) performing verification analyses. Each of the aforementioned steps are detailed in the following sections.

In order to generate synthetic dataset, the toolbox Generate Synthetic Data is employed, which is accessible from the menu Tools in the main menu bar of OpenIPDM. The interface for this toolbox is simple, and requires mainly the model parameters as an input. For this example case, we generate inspection data for E=20000 structural elements, with the average service-life for each structural element is T=60 years. The total number of inspectors I={I1,I2,…,II} involved is I=223 synthetic inspectors. Each synthetic inspector is assumed to have an observation error model, vt:V∼N(μV(Ii),σ2V(Ii))

are generated for each synthetic inspector using a uniform distribution and according to the user defined values. In this example, we rely on the default input in the GUI, with minor adjustments shown in Table

After providing the input, it is possible to start the process of generating the synthetic dataset by pressing the button Generate. The time to generate the synthetic data mainly depends on the size of the dataset and the compatibility of configurations with the monotonic deterioration process. The output of this toolbox is a set of .mat files, which is obtained after pressing the Save button. The list of files is composed of,

For additional information about the data generation step, the user can refer to the manual available with the software.

The last step in this case study is to examine the predictive capacity of the deterioration model using the model parameters estimated in the previous step. This is done by using the toolbox Verify Synthetic Data, accessible from the Analyses menu in the main menu bar of OpenIPDM. There exist several assessments that can be performed in order to verify the deterioration model performance. In this example, we consider the average forecast error over a period of time T=10 years, for a group of E=200 synthetic structural elements. The input to the toolbox is demonstrated on the interface shown in Figure 4. After providing the input files and parameters, it is possible to execute the verification analyses by pressing the button Run.

The processing time for the verification analyses mainly depends on the number of synthetic structural elements E involved in the analyses. After the analyses are done, the software output two graphs, shown in Figures 5 and 6. The first graph shows the absolute average error for the model forecast of the expected deterioration condition, speed and acceleration, as shown in Figure 5.

On the other hand, the second graph shows the average error for the model forecast of the expected deterioration condition, speed and acceleration (Figure 6).

Figures 5 and 6 represent the outcome of a single assessment, however, there are other verification assessments, which are described in details within the software manual.

OpenIPDM represents a step towards the accessibility to information about network-scale visual inspection data, as well as the deterioration behaviour of infrastructures. In many instances, visual inspection databases are managed by private and/or government agencies, therefore, the access to the inspection data is limited. OpenIPDM overcomes the data availability by enabling users to generate synthetic datasets with similar characteristics to visual inspection data taken from a real case study. Moreover, the software provides insights into managing network-scale visual inspections and provides a template for pre-processing and organizing the information for an efficient computational time. In addition, OpenIPDM relies on probabilistic methods with a demonstrated capacity to scale and a high potential for improvements in different areas. Promising improvement directions in this context are, enhancing the deterioration model by incorporating additional information about infrastructures, as well as reducing the computational cost associated with the parameter estimation framework. Furthermore, the software provides solid foundations for the development and testing of decision-making and planning frameworks.

In this paper, we present OpenIPDM, an open-source software for modelling the deterioration behaviour of infrastructures. The software is composed of several toolboxes which collectively enable the design, validation and verification of network-scale deterioration models. The frameworks currently available in OpenIPDM has state-of-the-art capabilities in terms of estimating the inspectors’ uncertainties and modelling the effect of interventions based on visual inspections. In addition, the software provides tools for managing large visual inspections databases as well as handling missing data and outliers. OpenIPDM is open for contributions and users are encouraged to extend the software capacity in modelling the deterioration behaviour and/or develop additional functionalities such as, the development of decision making and planning modules.

This project is funded by the Transportation Ministry of Quebec Province (MTQ), Canada. The authors would like to acknowledge the support of Simon Pedneault and René Gagnon for facilitating the access to information related to this project.