OpenAI Gym is a toolkit for reinforcement learning research. It includes a growing collection of benchmark problems that expose a common interface, and a website where people can share their results and compare the performance of algorithms. This whitepaper discusses the components of OpenAI Gym and the design decisions that went into the software. 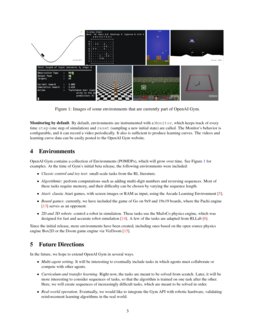 gym-gazebo2, a toolkit for reinforcement learning using ROS 2 and Gazebo

RLCard: A Toolkit for Reinforcement Learning in Card Games

A toolkit for developing and comparing reinforcement learning algorithms.

A toolkit for developing and comparing reinforcement learning algorithms

Reinforcement learning (RL) is the branch of machine learning that is concerned with making sequences of decisions. RL has a rich mathematical theory and has found a variety of practical applications

. Recent advances that combine deep learning with reinforcement learning have led to a great deal of excitement in the field, as it has become evident that general algorithms such as policy gradients and Q-learning can achieve good performance on difficult problems, without problem-specific engineering

To build on recent progress in reinforcement learning, the research community needs good benchmarks on which to compare algorithms. A variety of benchmarks have been released, such as the Arcade Learning Environment (ALE) [5], which exposed a collection of Atari 2600 games as reinforcement learning problems, and recently the RLLab benchmark for continuous control [6], to which we refer the reader for a survey on other RL benchmarks, including [7, 8, 9, 10, 11]. OpenAI Gym aims to combine the best elements of these previous benchmark collections, in a software package that is maximally convenient and accessible. It includes a diverse collection of tasks (called environments) with a common interface, and this collection will grow over time. The environments are versioned in a way that will ensure that results remain meaningful and reproducible as the software is updated.

Alongside the software library, OpenAI Gym has a website (gym.openai.com) where one can find scoreboards for all of the environments, showcasing results submitted by users. Users are encouraged to provide links to source code and detailed instructions on how to reproduce their results.

Reinforcement learning assumes that there is an agent that is situated in an environment. Each step, the agent takes an action, and it receives an observation and reward

OpenAI Gym focuses on the episodic setting of reinforcement learning, where the agent’s experience is broken down into a series of episodes. In each episode, the agent’s initial state is randomly sampled from a distribution, and the interaction proceeds until the environment reaches a terminal state. The goal in episodic reinforcement learning is to maximize the expectation of total reward per episode, and to achieve a high level of performance in as few episodes as possible.

The design of OpenAI Gym is based on the authors’ experience developing and comparing reinforcement learning algorithms, and our experience using previous benchmark collections. Below, we will summarize some of our design decisions.

Environments, not agents. Two core concepts are the agent and the environment. We have chosen to only provide an abstraction for the environment, not for the agent. This choice was to maximize convenience for users and allow them to implement different styles of agent interface. First, one could imagine an “online learning” style, where the agent takes (observation, reward, done) as an input at each timestep and performs learning updates incrementally. In an alternative “batch update” style, a agent is called with observation as input, and the reward information is collected separately by the RL algorithm, and later it is used to compute an update. By only specifying the agent interface, we allow users to write their agents with either of these styles.

Encourage peer review, not competition. The OpenAI Gym website allows users to compare the performance of their algorithms. One of its inspiration is Kaggle, which hosts a set of machine learning contests with leaderboards. However, the aim of the OpenAI Gym scoreboards is not to create a competition, but rather to stimulate the sharing of code and ideas, and to be a meaningful benchmark for assessing different methods.

RL presents new challenges for benchmarking. In the supervised learning setting, performance is measured by prediction accuracy on a test set, where the correct outputs are hidden from contestants. In RL, it’s less straightforward to measure generalization performance, except by running the users’ code on a collection of unseen environments, which would be computationally expensive. Without a hidden test set, one must check that an algorithm did not “overfit” on the problems it was tested on (for example, through parameter tuning).

We would like to encourage a peer review process for interpreting results submitted by users. Thus, OpenAI Gym asks users to create a Writeup describing their algorithm, parameters used, and linking to code. Writeups should allow other users to reproduce the results. With the source code available, it is possible to make a nuanced judgement about whether the algorithm “overfit” to the task at hand.

Strict versioning for environments. If an environment changes, results before and after the change would be incomparable. To avoid this problem, we guarantee than any changes to an environment will be accompanied by an increase in version number. For example, the initial version of the CartPole task is named Cartpole-v0, and if its functionality changes, the name will be updated to Cartpole-v1.

Monitoring by default. By default, environments are instrumented with a Monitor, which keeps track of every time step (one step of simulation) and reset (sampling a new initial state) are called. The Monitor’s behavior is configurable, and it can record a video periodically. It also is sufficient to produce learning curves. The videos and learning curve data can be easily posted to the OpenAI Gym website.

OpenAI Gym contains a collection of Environments (POMDPs), which will grow over time. See Figure 1 for examples. At the time of Gym’s initial beta release, the following environments were included:

Since the initial release, more environments have been created, including ones based on the open source physics engine Box2D or the Doom game engine via VizDoom [15].

In the future, we hope to extend OpenAI Gym in several ways.