We note that known methods achieving the optimal oracle complexity for first order convex optimization require quadratic memory, and ask whether this is necessary, and more broadly seek to characterize the minimax number of first order queries required to optimize a convex Lipschitz function subject to a memory constraint. 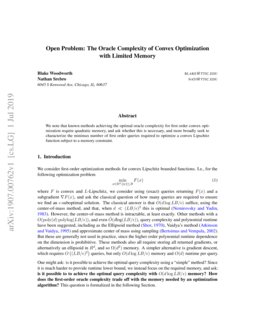 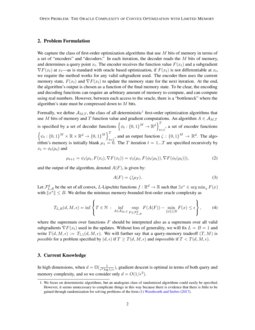 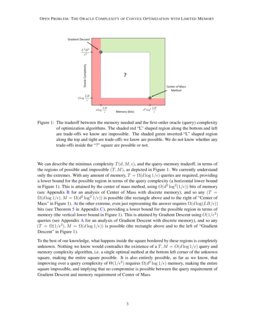 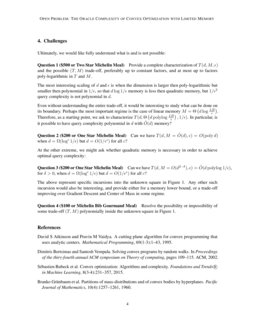 where F is convex and L-Lipschitz, we consider using (exact) queries returning F(x) and a subgradient ∇F(x), and ask the classical question of how many queries are required to ensure we find an ϵ-suboptimal solution. The classical answer is that O(dlogLB/ϵ) suffice, using the center-of-mass method, and that, when d≪(LB/ϵ)2 this is optimal (Nemirovsky and Yudin, 1983). However, the center-of-mass method is intractable, at least exactly. Other methods with a O(poly(d)polylog(LB/ϵ)), and even ~O(dlog(LB/ϵ)), query complexity and polynomial runtime have been suggested, including as the Ellipsoid method (Shor, 1970), Vaidya’s method (Atkinson and Vaidya, 1995) and approximate center of mass using sampling (Bertsimas and Vempala, 2002). But these are generally not used in practice, since the higher order polynomial runtime dependence on the dimension is prohibitive. These methods also all require storing all returned gradients, or alternatively an ellipsoid in Rd, and so Ω(d2) memory. A simpler alternative is gradient descent, which requires O((LB/ϵ)2) queries, but only O(dlogLB/ϵ) memory and O(d) runtime per query.

One might ask: is it possible to achieve the optimal query complexity using a “simple” method? Since it is much harder to provide runtime lower bound, we instead focus on the required memory, and ask: is it possible to to achieve the optimal query complexity with O(dlogLB/ϵ) memory? How does the first-order oracle complexity trade off with the memory needed by an optimization algorithm? This question is formalized in the following Section.

We capture the class of first-order optimization algorithms that use M bits of memory in terms of a set of “encoders” and “decoders.” In each iteration, the decoder reads the M bits of memory, and determines a query point xt. The encoder receives the function value F(xt) and a subgradient ∇F(xt) at xt—as is standard with oracle based optimization, if F(xt) is not differentiable at xt, we require the method works for any valid subgradient used. The encoder then uses the current memory state, F(xt) and ∇F(xt) to update the memory state for the next iteration. At the end, the algorithm’s output is chosen as a function of the final memory state. To be clear, the encoding and decoding functions can require an arbitrary amount of memory to compute, and can compute using real numbers. However, between each access to the oracle, there is a “bottleneck” where the algorithm’s state must be compressed down to M bits.

Formally, we define AM,T, the class of all deterministic111We focus on deterministic algorithms, but an analogous class of randomized algorithms could easily be specified. However, it seems unnecessary to complicate things in this way because there is evidence that there is little to be gained through randomization for solving problems of the form (1) Woodworth and Srebro (2017). first-order optimization algorithms that use M bits of memory and T function value and gradient computations. An algorithm A∈AM,T is specified by a set of decoder functions {ϕt:{0,1}M→Rd}Tt=1, a set of encoder functions {ψt:{0,1}M×R×Rd→{0,1}M}Tt=1, and an output function ζ:{0,1}M→Rd. The algorithm’s memory is initially blank μ1=0. The T iteration t=1...T are specified recursively by xt=ϕt(μt) and

and the output of the algorithm, denoted A(F), is given by:

where the supremum over functions F should be interpreted also as a supremum over all valid subgradients ∇F(xt) used in the updates. Without loss of generality, we will fix L=B=1 and write T(d,M,ϵ):=T1,1(d,M,ϵ). We will further say that a query-memory tradeoff (T,M) is possible for a problem specified by (d,ϵ) if T≥T(d,M,ϵ) and impossible if T<T(d,M,ϵ).

In high dimensions, when d=Ω(1ϵ2log1/ϵ), gradient descent is optimal in terms of both query and memory complexity, and so we consider only d=O(1/ϵ2).

To the best of our knowledge, what happens inside the square bordered by these regions is completely unknown. Nothing we know would contradict the existence of a T,M=O(dlog1/ϵ) query and memory complexity algorithm, i.e. a single optimal method at the bottom left corner of the unknown square, making the entire square possible. It is also entirely possible, as far as we know, that improving over a query complexity of Θ(1/ϵ2) requires Ω(d2log1/ϵ) memory, making the entire square impossible, and implying that no compromise is possible between the query requirement of Gradient Descent and memory requirement of Center of Mass.

Ultimately, we would like fully understand what is and is not possible:

Provide a complete characterization of T(d,M,ϵ) and the possible (T,M) trade-off, preferably up to constant factors, and at most up to factors poly-logarithmic in T and M.

The most interesting scaling of d and ϵ is when the dimension is larger then poly-logarithmic but smaller then polynomial in 1/ϵ, so that dlog1/ϵ memory is less then quadratic memory, but 1/ϵ2 query complexity is not polynomial in d.

Even without understanding the entire trade-off, it would be interesting to study what can be done on its boundary. Perhaps the most important regime is the case of linear memory M=Θ(dlogLBϵ). Therefore, as a starting point, we ask to characterize T(d,Θ(dpolylogLBϵ),1/ϵ). In particular, is it possible to have query complexity polynomial in d with ~O(d) memory?

At the other extreme, we might ask whether quadratic memory is necessary in order to achieve optimal query complexity:

The above represent specific incursions into the unknown square in Figure 1. Any other such incursion would also be interesting, and provide either for a memory lower bound, or a trade-off improving over Gradient Descent and Center of Mass in some regime.

Resolve the possibility or impossibility of some trade-off (T,M) polynomially inside the unknown square in Figure 1.

Appendix A Analysis of Gradient Descent

For any L-Lipschitz and convex function F with ∥x∗∥≤B, the gradient descent algorithm can find a point ^x with F(^x)−F∗≤ϵ using O(dlogLBϵ) bits of memory and O(L2B2ϵ2) function and gradient evaluations.

For now, assume that in each iteration the perturbation of the gradient descent iterates resulting from the discretization ~xt↦xt is bounded in L2 norm, i.e. ∥~xt−xt∥≤D. Then, following the standard gradient descent analysis,

Rearranging this expression, we conclude

Since the averaged iterate achieves this suboptimality, the best iterate’s suboptimality is at least this good. For T≥9L2B2ϵ2, this ensures that at least one of the iterates was ϵ-suboptimal. As long as Fbest is discretized to accuracy ϵ, then xbest is at most 2ϵ-suboptimal. This discretization can be achieved using log2LBϵ bits.

Therefore, the total number of bits of memory needed to implement gradient descent is at most

Appendix B Analysis of Center of Mass Algorithm

[[4]] For any convex set K⊆Rd with center of gravity c, and any halfspace H={x:⟨a,x−c⟩≥0} passing through c,

We conclude that there must be some iteration t in which ∃y∈Kα∩(Kt∖Kt+1). Thus, y∈Kα and ⟨~∇F(ct),y−ct⟩>0. We will now argue that the center of mass ct has small error:

Therefore, if we choose α=ϵ4LB and discretize gradients with L2 error at most ϵ4B, this ensures that F(ct)−F∗≤ϵ.

Once T iterations have been completed, we know that at least one of the centers must be an ϵ-approximate minimizer of the objective. Using the stored gradients, we can then recompute all centers and return a discretization of the best center. As long as ∣∣~F(ct)−F(ct)∣∣≤ϵ for all t, then the center chosen by the algorithm will be within ϵ of the best center. This discretization of the function values requires T⋅log(2LBϵ) bits.

The packing number of the Euclidean unit sphere in Rd with distance α is at least α−d. Let {x1,…,xN} be the largest possible packing of the unit sphere, with N<α−d. Consider the set of points that are within α of one of the points in the packing:

Therefore, there exists a point y∈B(0,1) such that ∥y−xi∥>α for all i. The existence of such a point contradicts the assumption that {x1,…,xN} is the largest possible packing. We conclude that the packing number is at least α−d.

For any L,B>0 and any ϵ≤LB2, any optimization algorithm that is guaranteed to return an ϵ-suboptimal point for any convex, L-Lipschitz function with ∥x∗∥≤B must use at least dlogLB2ϵ bits of memory. To begin, by Lemma C there exists a packing {x1,…,xN} of the ball {x:∥x∥≤B} of size at least N≥(LB2ϵ)d such that ∥∥xi−xj∥∥>2ϵL for all i≠j∈[N]. We will associate a function with each point in the packing, let

These functions are convex and L-Lipschitz, and their optimizers xi have norm less than B.

Note that any point x which is an approximate minimizer of some fi must have high function value on all other functions fj. Suppose fi(x)≤ϵ, then ∥x−xi∥≤ϵL. Consequently, for all j≠i, ∥∥x−xj∥∥=∥∥x−xi+xi−xj∥∥≥∥∥xi−xj∥∥−∥x−xi∥>ϵL, thus fj(x)=L∥∥x−xj∥∥>ϵ.

Consider using a memory-bounded optimization algorithm to optimize one of these functions fi. After the algorithm has made all of its first-order oracle accesses, the output function ζ must map from the final memory state μT to a solution ^x. Suppose the final memory state μT uses M<logN bits, then there are at most 2M<N outputs that the algorithm might give. However, as we just argued, there exist N functions such that returning an accurate solution for any one of them requires returning an inaccurate solution for all the others. Consequently, any algorithm which can output fewer than N different outputs will fail to optimize at least one of the functions f1,…,fN.