We propose online unsupervised domain adaptation (DA), which is performed incrementally as data comes in and is applicable when batch DA is not possible. In a part-of-speech (POS) tagging evaluation, we find that online unsupervised DA performs as well as batch DA. 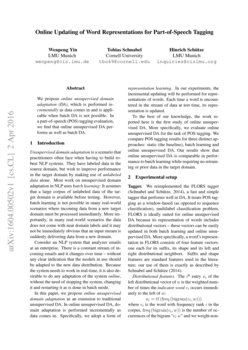 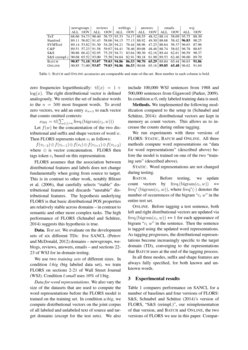 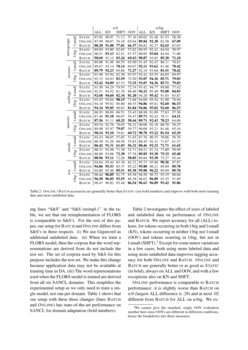 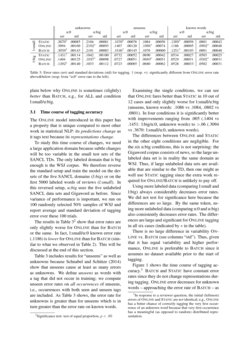 Unsupervised domain adaptation is a scenario that practitioners often face when having to build robust NLP systems. They have labeled data in the source domain, but wish to improve performance in the target domain by making use of unlabeled data alone. Most work on unsupervised domain adaptation in NLP uses batch learning: It assumes that a large corpus of unlabeled data of the target domain is available before testing. However, batch learning is not possible in many real-world scenarios where incoming data from a new target domain must be processed immediately. More importantly, in many real-world scenarios the data does not come with neat domain labels and it may not be immediately obvious that an input stream is suddenly delivering data from a new domain.

Consider an NLP system that analyzes emails at an enterprise. There is a constant stream of incoming emails and it changes over time – without any clear indication that the models in use should be adapted to the new data distribution. Because the system needs to work in real-time, it is also desirable to do any adaptation of the system online, without the need of stopping the system, changing it and restarting it as is done in batch mode.

Tagger. We reimplemented the FLORS tagger [Schnabel and Schütze2014]

, a fast and simple tagger that performs well in DA. It treats POS tagging as a window-based (as opposed to sequence classification), multilabel classification problem. FLORS is ideally suited for online unsupervised DA because its representation of words includes distributional vectors – these vectors can be easily updated in both batch learning and online unsupervised DA. More specifically, a word’s representation in FLORS consists of four feature vectors: one each for its suffix, its shape and its left and right distributional neighbors. Suffix and shape features are standard features used in the literature; our use of them is exactly as described by schnabel13flors.

Distributional features. The i\scriptsize th entry xi of the left distributional vector of w is the weighted number of times the indicator word ci occurs immediately to the left of w:              xi=tf(freq(bigram(ci,w))) where ci is the word with frequency rank i in the corpus, freq(bigram(ci,w)) is the number of occurrences of the bigram “ci w” and we weight non-zero frequencies logarithmically: tf(x)=1+log(x). The right distributional vector is defined analogously. We restrict the set of indicator words to the n=500 most frequent words. To avoid zero vectors, we add an entry xn+1 to each vector that counts omitted contexts:        x501=tf(∑j:j>nfreq(bigram(cj,w)))

Let f(w) be the concatentation of the two distributional and suffix and shape vectors of word w. Then FLORS represents token vi as follows:      f(vi−2)⊕f(vi−1)⊕f(vi)⊕f(vi+1)⊕f(vi+2) where ⊕ is vector concatenation. FLORS then tags token vi based on this representation.

Data for word representations. We also vary the size of the datasets that are used to compute the word representations before the FLORS model is trained on the training set. In condition u:big, we compute distributional vectors on the joint corpus of all labeled and unlabeled text of source and target domains (except for the test sets). We also include 100,000 WSJ sentences from 1988 and 500,000 sentences from Gigaword [Parker2009]. In condition u:0, only labeled training data is used.

Methods. We implemented the following modification compared to the setup in [Schnabel and Schütze2014]: distributional vectors are kept in memory as count vectors. This allows us to increase the counts during online tagging.

Static. Word representations are not changed during testing.

Batch. Before testing, we update count vectors by freq(bigram(ci,w)) += freq∗(bigram(ci,w)), where freq∗(⋅) denotes the number of occurrences of the bigram “ci w” in the entire test set.

Online. Before tagging a test sentence, both left and right distributional vectors are updated via freq(bigram(ci,w)) += 1 for each appearance of bigram “ci w

Batch uses at the end of the tagging process.

In all three modes, suffix and shape features are always fully specified, for both known and unknown words.

Table 1 compares performance on SANCL for a number of baselines and four versions of FLORS: S&S, schnabel13flors’s version of FLORS, “S&S (reimpl.)”, our reimplementation of that version, and Batch and Online, the two versions of FLORS we use in this paper. Comparing lines “S&S” and “S&S (reimpl.)” in the table, we see that our reimplementation of FLORS is comparable to S&S’s. For the rest of this paper, our setup for Batch and Online differs from S&S’s in three respects. (i) We use Gigaword as additional unlabeled data. (ii) When we train a FLORS model, then the corpora that the word representations are derived from do not include the test set. The set of corpora used by S&S for this purpose includes the test set. We make this change because application data may not be available at training time in DA. (iii) The word representations used when the FLORS model is trained are derived from all six SANCL domains. This simplifies the experimental setup as we only need to train a single model, not one per domain. Table 1 shows that our setup with these three changes (lines Batch and Online) has state-of-the-art performance on SANCL for domain adaptation (bold numbers).

Table 2 investigates the effect of sizes of labeled and unlabeled data on performance of Online and Batch. We report accuracy for all (ALL) tokens, for tokens occurring in both l:big and l:small (KN), tokens occurring in neither l:big nor l:small (OOV) and tokens ocurring in l:big, but not in l:small (SHFT).111We cannot give the standard, single OOV evaluation number here since OOVs are different in different conditions, hence the breakdown into three measures. Except for some minor variations in a few cases, both using more labeled data and using more unlabeled data improves tagging accuracy for both Online and Batch. Online and Batch are generally better or as good as Static (in bold), always on ALL and OOV, and with a few exceptions also on KN and SHFT.

Online performance is comparable to Batch performance: it is slightly worse than Batch on u:0 (largest ALL difference is .29) and at most .02 different from Batch for ALL on u:big. We explain below why Online is sometimes (slightly) better than Batch, e.g., for ALL and condition l:small/u:big.

The Online model introduced in this paper has a property that is unique compared to most other work in statistical NLP: its predictions change as it tags text because its representations change.

To study this time course of changes, we need a large application domain because subtle changes will be too variable in the small test sets of the SANCL TDs. The only labeled domain that is big enough is the WSJ corpus. We therefore reverse the standard setup and train the model on the dev sets of the five SANCL domains (l:big) or on the first 5000 labeled words of reviews (l:small). In this reversed setup, u:big

uses the five unlabeled SANCL data sets and Gigaword as before. Since variance of performance is important, we run on 100 randomly selected 50% samples of WSJ and report average and standard deviation of tagging error over these 100 trials.

Table 3 includes results for “unseens” as well as unknowns because schnabel13flors show that unseens cause at least as many errors as unknowns. We define unseens as words with a tag that did not occur in training; we compute unseen error rates on all occurrences of unseens, i.e., occurrences with both seen and unseen tags are included. As Table 3 shows, the error rate for unknowns is greater than for unseens which is in turn greater than the error rate on known words.

The differences between Online and Static in the other eight conditions are negligible. For the six u:big conditions, this is not surprising: the Gigaword corpus consists of news, so the large unlabeled data set is in reality the same domain as WSJ. Thus, if large unlabeled data sets are available that are similar to the TD, then one might as well use Static tagging since the extra work required for Online/Batch is unlikely to pay off.

Using more labeled data (comparing l:small and l:big) always considerably decreases error rates. We did not test for significance here because the differences are so large. By the same token, using more unlabeled data (comparing u:0 and u:big) also consistently decreases error rates. The differences are large and significant for Online tagging in all six cases (indicated by ∗ in the table).

There is no large difference in variability Online vs. Batch (see columns “std”). Thus, given that it has equal variability and higher performance, Online is preferable to Batch since it assumes no dataset available prior to the start of tagging.

Figure 1 shows the time course of tagging accuracy.333In response to a reviewer question, the initial (leftmost) errors of Online and Static are not identical; e.g., Online has a better chance of correctly tagging the very first occurrence of an unknown word because that very first occurrence has a meaningful (as opposed to random) distributed representation. Batch and Static have constant error rates since they do not change representations during tagging. Online error decreases for unknown words – approaching the error rate of Batch – as more and more is learned with each additional occurrence of an unknown word (top).

Interestingly, the error of Online increases for unseens and known words (middle&bottom panels) (even though it is always below the error rate of Batch). The reason is that the Batch update swamps the original training data for l:small/u:0 because the WSJ test set is bigger by a large factor than the training set. Online fares better here because in the beginning of tagging the updates of the distributional representations consist of small increments. We noticed this in Table 2 too: there, Online outperformed Batch in some cases on KN for l:small/u:big. In future work, we plan to investigate how to weight distributional counts from the target data relative to that from the (labeled und unlabeled) source data.

All of this work on supervised online learning is not directly relevant to this paper since we address the problem of unsupervised DA. Unlike online supervised learners, we keep the statistical model unchanged during DA and adopt a representation learning approach: each unlabeled context of a word is used to update its representation.

There is much work on unsupervised DA for POS tagging, including work using constraint-based methods [Subramanya et al.2010, Rush et al.2012], instance weighting [Choi and Palmer2012], self-training [Huang et al.2009, Huang and Yates2010], and co-training [Kübler and Baucom2011]. All of this work uses batch learning. For space reasons, we do not discuss supervised DA (e.g., daume2006domain).

We introduced online updating of word representations, a new domain adaptation method for cases where target domain data are read from a stream and Batch processing is not possible. We showed that online unsupervised DA performs as well as batch learning. It also significantly lowers error rates compared to Static (i.e., no domain adaptation). Our implementation of FLORS is available at cistern.cis.lmu.de/flors

Acknowledgments. This work was supported by a Baidu scholarship awarded to Wenpeng Yin and by Deutsche Forschungsgemeinschaft (grant DFG SCHU 2246/10-1 FADeBaC).