Online Search for a Hyperplane in High-Dimensional Euclidean Space

We consider the online search problem in which a server starting at the origin of a d-dimensional Euclidean space has to find an arbitrary hyperplane. The best-possible competitive ratio and the length of the shortest curve from which each point on the d-dimensional unit sphere can be seen are within a constant factor of each other. We show that this length is in Ω(d)∩ O(d^3/2). 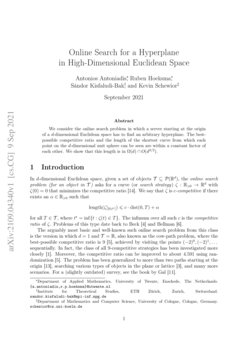 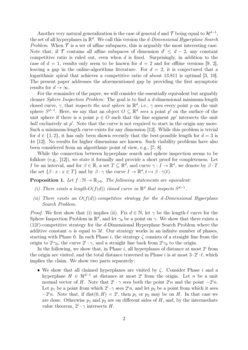 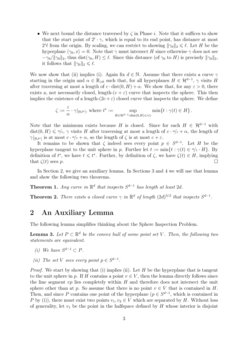 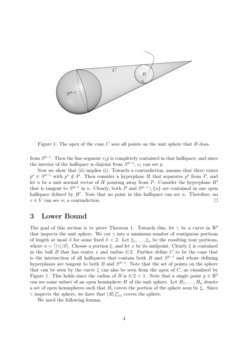 In d-dimensional Euclidean space, given a set of objects T⊆P(Rd), the online search problem (for an object in T) asks for a curve (or search strategy) ζ:R⩾0→Rd with ζ(0)=0 that minimizes the competitive ratio [14]. We say that ζ is c-competitive if there exists an α∈R⩾0 such that

for all T∈T, where t⋆=inf{t:ζ(t)∈T}. The infimum over all such c is the competitive ratio of ζ. Problems of this type date back to Beck [4] and Bellman [6].

The arguably most basic and well-known such online search problem from this class is the version in which d=1 and T=R, also known as the cow-path problem, where the best-possible competitive ratio is 9 [5], achieved by visiting the points (−2)0,(−2)1,… sequentially. In fact, the class of all 9-competitive strategies has been investigated more closely [1]. Moreover, the competitive ratio can be improved to about 4.591 using randomization [5]. The problem has been generalized to more than two paths starting at the origin [13], searching various types of objects in the plane or lattice [3], and many more scenarios. For a (slightly outdated) survey, see the book by Gal [11].

Another very natural generalization is the case of general d and T being equal to Hd−1, the set of all hyperplanes in Rd. We call this version the d-Dimensional Hyperplane Search Problem. When T is a set of affine subspaces, this is arguably the most interesting case. Note that, if T contains all affine subspaces of dimension d′≤d−2, any constant competitive ratio is ruled out, even when d is fixed. Surprisingly, in addition to the case of d=1, results only seem to be known for d=2 and for offline versions [9, 2], leaving a gap in the online-algorithms literature. For d=2, it is conjectured that a logarithmic spiral that achieves a competitive ratio of about 13.811 is optimal [3, 10]. The present paper addresses the aforementioned gap by providing the first asymptotic results for d→∞.

For the remainder of the paper, we will consider the essentially equivalent but arguably cleaner Sphere Inspection Problem: The goal is to find a d-dimensional minimum-length closed curve, γ, that inspects the unit sphere in Rd, i.e., γ sees every point p on the unit sphere Sd−1. Here, we say that an object O⊆Rd sees a point p′ on the surface of the unit sphere if there is a point p∈O such that the line segment pp′ intersects the unit ball exclusively at p′. Note that the curve is not required to start in the origin any more. Such a minimum-length curve exists for any dimension [12]. While this problem is trivial for d∈{1,2}, it has only been shown recently that the best-possible length for d=3 is 4π [12]. No results for higher dimensions are known. Such visibility problems have also been considered from an algorithmic point of view, e.g., [7, 8].

While the connection between hyperplane search and sphere inspection seems to be folklore (e.g., [12]), we state it formally and provide a short proof for completeness. Let I be an interval, and for β∈R, a set T⊆Rd, and curve γ:I→Rd, we denote by β⋅T the set {β⋅x:x∈T} and by β⋅γ the curve I→Rd,t↦β⋅γ(t).

We first show that (i) implies (ii). Fix d∈N, let γ be the length-ℓ curve for the Sphere Inspection Problem in Rd, and let γ0 be a point on γ. We show that there exists a (12ℓ)-competitive strategy for the d-Dimensional Hyperplane Search Problem where the additive constant α is equal to 3ℓ. Our strategy works in an infinite number of phases, starting with Phase 0. In each Phase i, the strategy ζ consists of a straight line from the origin to 2iγ0, the curve 2i⋅γ, and a straight line back from 2iγ0 to the origin.

In the following, we show that, in Phase i, all hyperplanes of distance at most 2i from the origin are visited, and the total distance traversed in Phase i is at most 3⋅2i⋅ℓ, which implies the claim. We show two parts separately:

We now show that (ii) implies (i). Again fix d∈N. Assume that there exists a curve γ starting in the origin and α∈R⩾0 such that, for all hyperplanes H∈Hd−1, γ visits H after traversing at most a length of c⋅dist(0,H)+α. We show that, for any ε>0, there exists a, not necessarily closed, length-(c+ε) curve that inspects the sphere. This then implies the existence of a length-(2c+ε) closed curve that inspects the sphere. We define

It remains to be shown that ζ indeed sees every point p∈Sd−1. Let H be the hyperplane tangent to the unit sphere in p. Further let t:=min{t:γ(t)∈\nicefracαε⋅H}. By definition of t⋆, we have t⩽t⋆. Further, by definition of ζ, we have ζ(t)∈H, implying that ζ(t) sees p. ∎

In Section 2, we give an auxiliary lemma. In Sections 3 and 4 we will use that lemma and show the following two theorems.

Any curve in Rd that inspects Sd−1 has length at least 2d.

The following lemma simplifies thinking about the Sphere Inspection Problem.

Let P⊂Rd be the convex hull of some point set V. Then, the following two statements are equivalent.

We start by showing that (i) implies (ii). Let H be the hyperplane that is tangent to the unit sphere in p. If H contains a point v∈V, then the lemma directly follows since the line segment vp lies completely within H and therefore does not intersect the unit sphere other than at p. So assume that there is no point v∈V that is contained in H. Then, and since P contains one point of the hyperplane (p∈Sd−1, which is contained in P by a), there must exist two points v1,v2∈V which are separated by H. Without loss of generality, let v1 be the point in the halfspace defined by H whose interior is disjoint from Sd−1. Then the line segment v1p is completely contained in that halfspace, and since the interior of the halfspace is disjoint from Sd−1, v1 can see p.

Now we show that (ii) implies (i). Towards a contradiction, assume that there exists p⋆∈Sd−1 with p⋆∉P. Then consider a hyperplane H that separates p⋆ from P, and let n be a unit normal vector of H pointing away from P. Consider the hyperplane H′ that is tangent to Sd−1 in n. Clearly, both P and Sd−1∖{n} are contained in one open halfspace defined by H′. Note that no point in this halfspace can see n. Therefore, no v∈V can see n; a contradiction. ∎

The goal of this section is to prove Theorem 1. Towards this, let γ be a curve in Rd that inspects the unit sphere. We cut γ into a minimum number of contiguous portions of length at most δ for some fixed δ<2. Let ξ1,…,ξn be the resulting tour portions, where n=⌈|γ|/δ⌉. Choose a portion ξ, and let x be its midpoint. Clearly ξ is contained in the ball B that has center x and radius δ/2. Further define C to be the cone that is the intersection of all halfspaces that contain both B and Sd−1 and whose defining hyperplanes are tangent to both B and Sd−1. Note that the set of points on the sphere that can be seen by the curve ξ can also be seen from the apex of C, as visualized by Figure 1. This holds since the radius of B is δ/2<1. Note that a single point p∈Rd can see some subset of an open hemisphere H of the unit sphere. Let H1,…,Hn denote a set of open hemispheres such that Hi covers the portion of the sphere seen by ξi. Since γ inspects the sphere, we have that (Hi)ni=1 covers the sphere.

We need the following lemma.

The minimum number of open hemispheres that cover Sd−1 is d+1.

To show that d+1 points are sufficient, choose a simplex containing the sphere. Now consider the set of open hemispheres whose poles are colinear with the origin and a vertex of that simplex. Indeed, since the simplex contains the sphere, by Lemma 3, the set of vertices of the simplex sees every point p∈Sd−1. Since each point sees only a subset of the corresponding open hemisphere, the upper bound follows.

In this section we prove Theorem 2. Let Cd be the d-dimensional cross-polytope, i.e., the polytope {x∈Rd:∥x∥1≤1}. Define ¯Cd:=√d⋅Cd={x∈Rd:∥x∥1≤√d}, as shown in Figure 2. We claim that the vertices of ¯Cd inspect the unit sphere.

For any point p∈Sd−1, there exists a vertex v of ¯Cd that sees p.

Let G(¯Cd) be the graph111The graph G(P) of a polytope P is a graph with a node for each vertex of P and an edge connecting those nodes if P has an edge between the corresponding vertices. The graph of P is also referred to as its 1-skeleton. of polytope ¯Cd. Note that G(¯Cd) is the so-called cocktail party graph which can be obtained by removing a perfect matching from a complete graph on 2d vertices (indeed, in ¯Cd any vertex v has an edge to any other vertex except −v). We next prove that G(¯Cd) is Hamiltonian.

The graph G(¯Cd) is Hamiltonian.

The proof is by induction on d. The statement clearly holds for R2 where the cross polytope is a square, and G(¯C2) itself is a Hamiltonian cycle that we denote by c2. Consider a Hamiltonian cycle cd−1 for G(¯Cd−1). Note that G(¯Cd) can be constructed by G(¯Cd−1) and adding two nodes, v⋆ and −v⋆ that are connected to each of the nodes of G(¯Cd−1). To construct a cycle cd of G(¯Cd), take any two distinct edges {v1,v2} and {v3,v4} contained in cd−1 and replace them with the edges {v1,v⋆},{v⋆,v2} and {v3,−v⋆},{v3,−v⋆}, respectively. The resulting tour is connected, visits all nodes of G(¯Cd) exactly once and the used edges are contained in the edge set of G(¯Cd), thus ensuring the feasibility of cd. ∎

By Lemma 5 it directly follows that any closed curve that visits all the vertices of ¯Cd inspects the unit sphere, and therefore so does the closed curve γ corresponding to the Hamiltonian cycle cd in the skeleton of ¯Cd. To complete the proof of Theorem 2, note that each edge of ¯Cd has a length of √2d and that γ traverses 2d such edges.

In this paper, we narrowed down the optimal competitive ratio for the d-Dimensional Hyperplane Search Problem to Ω(d)∩O(d3/2). The obvious open problem is closing this gap.