In this paper, we analyze a large dataset of user-generated music listening events from Last.fm, focusing on users aged 6 to 18 years. Our contribution is two-fold. First, we study the music genre preferences of this young user group and analyze these preferences for homogeneity within more fine-grained age groups and with respect to gender and countries. Second, we investigate the performance of a collaborative filtering recommender when tailoring music recommendations to different age groups. We find that doing so improves performance for all user groups up to 18 years, but decreases performance for adult users aged 19 years and older. 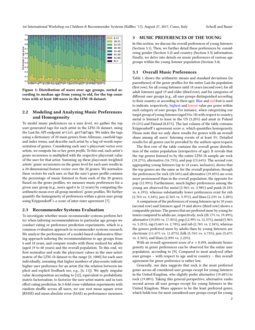 Kids and adolescents use computers mainly for learning and entertainment purposes (Chiasson and Gutwin, 2005) and this age group is also the one that is highly engaged with music (IPSOS and IFPI, 2016). Therefore, it does not come as a surprise that especially in the age group of <25 years, music streaming portals are growing in popularity (IPSOS and IFPI, 2016). Music service providers offering integrated music recommender systems thus have to be prepared for this young user group.

Considering user properties, including demographics such as gender, age, or country (e.g., (Al-Shamri, 2016; Zhao et al., 2014)), is a widely adopted approach for recommender systems and has been focus of research in the past few years.In the field of music recommender systems, relying on listening histories or ratings is nevertheless still the most common approach (Schedl et al., 2014). Still, recent work (e.g., (Shi et al., 2014; Schedl and Hauger, 2015)) shows that integrating different listener or listening information can substantially improve the quality of music recommendations.

Studies investigating the relationship between age and music preferences are particularly rare. Most researchers draw their samples from the population of university students; hence, samples are mostly homogeneous with respect to age (Laplante, 2014). The few studies that allow to draw conclusions with respect to age, though, found that it is substantially associated with music preferences, particularly in terms of genre (Ter Bogt et al., 2011; Harrison and Ryan, 2010) and suggest to consider the relationship between age and music taste in music recommender systems (Laplante, 2014).

Against this background, the contribution of this paper is two-fold. First, we analyze music preferences of kids and adolescents based on the LFM-1b dataset (Schedl, 2016), which aggregates information about more than one billion listening events by more than 120,000 Last.fm users. Second, exploiting the same dataset, we study the performance of a collaborative filtering approach, tailoring its recommendations to particular age groups, ranging from 6 to 18 years.

To allow for a clear structure, we first describe the methods and material used for our studies in Section 2. In Section 3, we present our findings on the music taste of kids and adolescents, detailing differences with respect to gender, country, and fine-grained age groups. In Section 3, we report and discuss our findings on the recommendation experiments. Finally, we conclude with a summary and outlook to future work in Section 5.

In the following, we describe the dataset, our approach to model music preferences on the user level, and how we investigate a user group’s preferences and homogeneity of these preferences.

To model music preferences on a user level, we gather the top user-generated tags for each artist in the LFM-1b dataset, using the Last.fm API endpoint artist.getTopTags. We index the tags using a dictionary of 20

main genres from Allmusic, casefold tags and index terms, and describe each artist by a bag-of-words representation of genres. Considering each user’s playcount vector over artists, we compute his or her

genre profile. To this end, each artist’s genre occurrence is multiplied with the respective playcount value of the user for that artist. Summing up these playcount-weighted artists’ genre occurrences on the genre level for each user results in a 20-dimensional feature vector over the 20 genres. We normalize these vectors for each user, so that the user’s genre profile contains the percentage of music listened to from each of the 20 genres. Based on the genre profiles, we measure music preferences for a given user group (e.g., users aged 6 to 12 years) by computing the arithmetic mean over all group members’ genre profiles. We further quantify the homogeneity of preferences within a given user group using Krippendorff’s α score of inter-rater agreement (Krippendorff, 2013).

To investigate whether music recommender systems perform better when tailoring recommendations to particular age groups we conduct rating or preference prediction experiments, which is a common evaluation approach in recommender systems research. We analyze the performance of a model-based collaborative filtering approach tailoring the recommendations to age groups from 6 and 18 years, and compare results with those realized for adults (aged 19 to 60 years) and the overall population. To this end, we first normalize and scale the playcount values in the user-artist-matrix of the LFM-1b dataset to the range [0, 1000] for each user individually, assuming that higher numbers of playcounts indicate higher user preference for an artist (for the relation between implicit and explicit feedback see, e.g., (Parra and Amatriain, 2011; Jawaheer et al., 2010)

). We apply singular value decomposition according to

(Salakhutdinov and Mnih, 2007), equivalent to probabilistic matrix factorization, to factorize the user-artist-matrix and in turn effect rating prediction. In 5-fold cross-validation experiments with random shuffle across all users, we use root mean square error (RMSE) and mean absolute error (MAE) as performance measures.

3. Music Preferences of the Young

shows the arithmetic means and standard deviations (in parentheses) of the genre profiles for the entire Last.fm population (first row), for all young listeners until 18 years (second row), for all adult listeners aged 19 and older (third row), and for categories of different user groups (e.g., all user groups distinguished according to their country or according to their age).

Blue and red font is used to indicate, respectively, highest and lowest value per genre within each category of user groups. For instance, when categorizing our target group of young listeners (aged 0 to 18) with respect to country, metal is listened to least in the US (3.20%) and most in Poland (9.12%) and Finland (8.87%). The last column of the table contains Krippendorff’s agreement score α, which quantifies homogeneity. Please note that we only show results for genres with an overall share among all users’ listening events of at least 3%. Detailed results for all genres can be provided by the authors upon request.

The general preference for rock music among young listeners seems to be consistent across all analyzed countries. A similar picture is shown for the genres alternative and pop. Country-specific differences can be seen for other genres, though.

The highest homogeneity of music preferences can be found for the United Kingdom (α=0.623) and Sweden (α=0.612), which are higher compared to the overall group of young users (α=0.539) and the overall user population (α=0.493).

We conduct preference prediction experiments for various age groups as described in Section 2.3 and report error measures in Table 2. An overall performance score is obtained using all user playcounts of the dataset, independent of the users’ age (first row). To assess to which extent tailoring recommendations to different age groups affects recommendation performance, we create subsets of users according to their membership in age groups 6-12, 13-14, 15-16, and 17-18; then we perform the same experiment as described above individually on these subsets. The results for a subset comprising the entire group of 6- to 18-aged users can be found in the second row of Table 2. The third row contrasts these results to the user group of adults (19 to 60 years). The results for the more fine-grained age ranges can be found in the bottom rows. Our discussion focuses on the RMSE values; the insights gained from the RMSE values correspond to the ones gained via MAE.

Our results suggest that the general performance for the whole young group (0,18) substantially differs from that of the overall population (RMSE of 7.766 vs. 29.105). In addition, RMSE is smaller for all age groups ≤18 years compared to the error for the overall population. This indicates that kids and adolescents aged 6 to 18 benefit substantially from like-minded peers when recommending items with collaborative filtering, as underpinned by RMSE values as low as 5.178 to 10.395. This observation is in line with findings from development psychology that music is considered a means for socializing with peers during adolescence (Laiho, 2004). The recommendations work particularly well for the youngest age group (6,12) with an RMSE of 5.178 and for users late in their adolescence (17,18) with an RMSE of 7.469.

We analyzed the music preferences of kids and adolescents aged 6 to 18 years in terms of genre preferences and homogeneity of these preferences, based on the LFM-1b dataset of Last.fm users. We uncovered substantial differences in both preferences and homogeneity between young users, adult users, and the overall user population. Such differences were also found between countries and gender of the young population and between fine-grained age groups. In recommender systems experiments, we found that preference predictions were substantially more accurate for the young user groups than for the adult population. We conclude that tailoring a collaborative filtering systems to users ≤18 years is beneficial.

A limitation of our approach is that the LFM-1b dataset may not necessarily generalize to the population at large, in particular in terms of age distribution. Still, as listeners up to 18 years are well represented in the dataset and this age group is known to use social media platforms frequently (Chassiakos et al., 2016), we assume that the dataset provides a good indicator. Further in-depth investigation is necessary, especially with respect to the highly varying “music listening culture” in different countries. We will integrate more data sources and deploy additional research instruments (e.g., surveys).