We study the problem of learning Markov decision processes with finite state and action spaces when the transition probability distributions and loss functions are chosen adversarially and are allowed to change with time. We introduce an algorithm whose regret with respect to any policy in a comparison class grows as the square root of the number of rounds of the game, provided the transition probabilities satisfy a uniform mixing condition. Our approach is efficient as long as the comparison class is polynomial and we can compute expectations over sample paths for each policy. Designing an efficient algorithm with small regret for the general case remains an open problem. 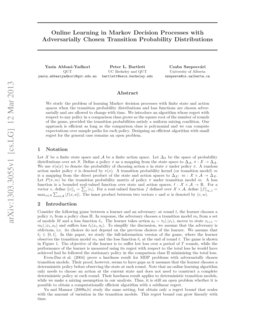 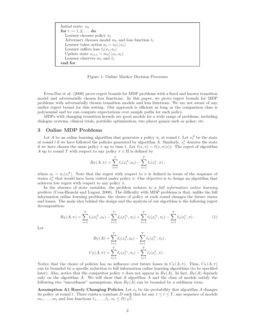 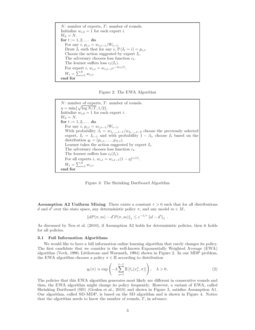 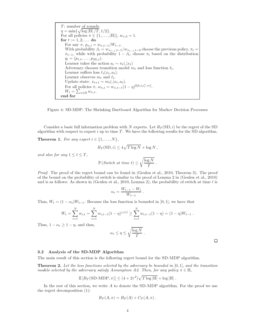 We study the problem of online learning in a class of Markov decision pr...
Gergely Neu, et al. ∙

We present a method for pursuit/evasion that is highly efficient and and...
Joshua R. Bertram, et al. ∙

v, define ∥v∥1=∑i|vi|. For a real-valued function f defined over X×A, define ∥f∥∞,1=maxx∈X∑a∈A|f(x,a)|. The inner product between two vectors v and w is denoted by ⟨v,w⟩.

Consider the following game between a learner and an adversary: at round t, the learner chooses a policy πt from a policy class Π. In response, the adversary chooses a transition model mt from a set of models M and a loss function ℓt. The learner takes action at∼πt(.|xt), moves to state xt+1∼mt(.|xt,at) and suffers loss ℓt(xt,at). To simplify the discussion, we assume that the adversary is oblivious, i.e. its choices do not depend on the previous choices of the learner. We assume that ℓt∈[0,1]. In this paper, we study the full-information version of the game, where the learner observes the transition model mt and the loss function ℓt at the end of round t. The game is shown in Figure 1. The objective of the learner is to suffer low loss over a period of T rounds, while the performance of the learner is measured using its regret with respect to the total loss he would have achieved had he followed the stationary policy in the comparison class Π minimizing the total loss.

Even-Dar et al. (2004) prove a hardness result for MDP problems with adversarially chosen transition models. Their proof, however, seems to have gaps as it assumes that the learner chooses a deterministic policy before observing the state at each round. Note that an online learning algorithm only needs to choose an action at the current state and does not need to construct a complete deterministic policy at each round. Their hardness result applies to deterministic transition models, while we make a mixing assumption in our analysis. Thus, it is still an open problem whether it is possible to obtain a computationally efficient algorithm with a sublinear regret.

Yu and Mannor (2009a, b) study the same setting, but obtain only a regret bound that scales with the amount of variation in the transition models. This regret bound can grow linearly with time.

Even-Dar et al. (2009) prove regret bounds for MDP problems with a fixed and known transition model and adversarially chosen loss functions. In this paper, we prove regret bounds for MDP problems with adversarially chosen transition models and loss functions. We are not aware of any earlier regret bound for this setting. Our approach is efficient as long as the comparison class is polynomial and we can compute expectations over sample paths for each policy.

Let A be an online learning algorithm that generates a policy πt at round t. Let xAt be the state at round t if we have followed the policies generated by algorithm A. Similarly, xπt denotes the state if we have chosen the same policy π up to time t. Let ℓ(x,π)=ℓ(x,π(x)). The regret of algorithm A up to round T with respect to any policy π∈Π is defined by

In the absence of state variables, the problem reduces to a full information online learning problem (Cesa-Bianchi and Lugosi, 2006). The difficulty with MDP problems is that, unlike the full information online learning problems, the choice of policy at each round changes the future states and losses. The main idea behind the design and the analysis of our algorithm is the following regret decomposition:

Notice that the choice of policies has no influence over future losses in CT(A,π). Thus, CT(A,π) can be bounded by a specific reduction to full information online learning algorithms (to be specified later). Also, notice that the competitor policy π does not appear in BT(A). In fact, BT(A) depends only on the algorithm A. We will show that if algorithm A and the class of models satisfy the following two “smoothness” assumptions, then BT(A) can be bounded by a sublinear term.

As discussed by Neu et al. (2010), if Assumption 3 holds for deterministic policies, then it holds for all policies.

We would like to have a full information online learning algorithm that rarely changes its policy. The first candidate that we consider is the well-known Exponentially Weighted Average (EWA) algorithm (Vovk, 1990, Littlestone and Warmuth, 1994) shown in Figure 2. In our MDP problem, the EWA algorithm chooses a policy π∈Π according to distribution

The policies that this EWA algorithm generates most likely are different in consecutive rounds and thus, the EWA algorithm might change its policy frequently. However, a variant of EWA, called Shrinking Dartboard (SD) (Geulen et al., 2010) and shown in Figure 3, satisfies Assumption 3. Our algorithm, called SD-MDP, is based on the SD algorithm and is shown in Figure 4. Notice that the algorithm needs to know the number of rounds, T, in advance.

Consider a basic full information problem with N experts. Let RT(\textscSD,i) be the regret of the SD algorithm with respect to expert i up to time T. We have the following results for the SD algorithm.

3.2 Analysis of the Sd-Mdp Algorithm

The main result of this section is the following regret bound for the SD-MDP algorithm.

In the rest of this section, we write A to denote the SD-MDP algorithm. For the proof we use the regret decomposition (1):

Consider the following imaginary game between a learner and an adversary: we have a set of experts (policies) Π={π1,…,π|Π|}. At round t, the adversary chooses a loss vector ct∈[0,1]Π, whose ith element determines the loss of expert πi at this round. The learner chooses a distribution over experts qt (defined by the SD algorithm), from which it draws an expert πt. Next, the learner observes the loss function ct. From the regret bound for the SD algorithm (Theorem 1), it is guaranteed that for any expert π,

For any state distribution d, any transition model m, and any policies π and π′,

Let αt be the probability of a policy switch at time t. Then, αt≤√log|Π|/T.

Proof is identical to the proof of Theorem 1. ∎

Let Ft=σ(π1,…,πt). Notice that the choice of policies are independent of the state variables. We can write

and Lemma 5, we get that

What makes the analysis possible is the fact that all policies mix no matter what transition model is played by the adversary.

The result is obvious by Lemmas 3 and 6. ∎

The next corollary extends the result of Theorem 2 to continuous policy spaces.

Let Π be an arbitrary policy space, N(ϵ) be the ϵ-covering number of space (Π,∥.∥∞,1), and C(ϵ) be an ϵ-cover. Assume that we run the SD-MDP algorithm on C(ϵ). Then, under the same assumptions as in Theorem 2, for any policy π∈Π,

With an argument similar to the one in the proof of Lemma 6, we can show that