This paper considers online convex optimization (OCO) with stochastic constraints, which generalizes Zinkevich's OCO over a known simple fixed set by introducing multiple stochastic functional constraints that are i.i.d. generated at each round and are disclosed to the decision maker only after the decision is made. This formulation arises naturally when decisions are restricted by stochastic environments or deterministic environments with noisy observations. It also includes many important problems as special cases, such as OCO with long term constraints, stochastic constrained convex optimization, and deterministic constrained convex optimization. To solve this problem, this paper proposes a new algorithm that achieves O(√(T)) expected regret and constraint violations and O(√(T)(T)) high probability regret and constraint violations. Experiments on a real-world data center scheduling problem further verify the performance of the new algorithm. 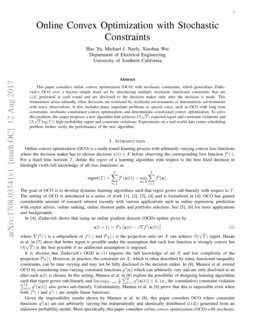 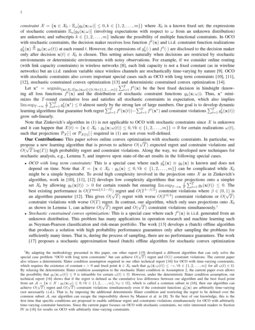 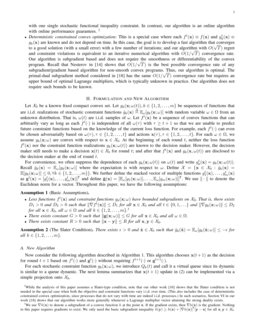 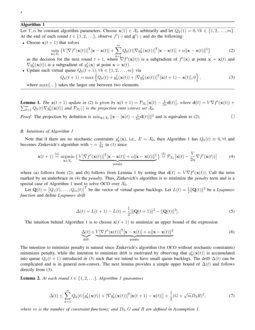 We propose an algorithm for online convex optimization which examines a ...
Jianjun Yuan, et al. ∙

In this paper, we investigate the framework of Online Convex Optimizatio...
Deepan Muthirayan, et al. ∙

x(t)∈X before observing the corresponding loss function ft(⋅). For a fixed time horizon T, define the regret of a learning algorithm with respect to the best fixed decision in hindsight (with full knowledge of all loss functions) as

The goal of OCO is to develop dynamic learning algorithms such that regret grows sub-linearly with respect to T. The setting of OCO is introduced in a series of work [1, 2, 3, 4] and is formalized in [4]. OCO has gained considerable amount of research interest recently with various applications such as online regression, prediction with expert advice, online ranking, online shortest paths and portfolio selection. See [5, 6] for more applications and backgrounds.

In [4], Zinkevich shows that using an online gradient descent (OGD) update given by

where ∇ft(⋅) is a subgradient of ft(⋅) and PX[⋅] is the projection onto set X can achieve O(√T) regret. Hazan et al. in [7] show that better regret is possible under the assumption that each loss function is strongly convex but O(√T) is the best possible if no additional assumption is imposed.

It is obvious that Zinkevich’s OGD in (1) requires the full knowledge of set X and low complexity of the projection PX[⋅]. However, in practice, the constraint set X, which is often described by many functional inequality constraints, can be time varying and may not be fully disclosed to the decision maker. In [8], Mannor et al. extend OCO by considering time-varying constraint functions gt(x) which can arbitrarily vary and are only disclosed to us after each x(t) is chosen. In this setting, Mannor et al. in [8] explore the possibility of designing learning algorithms such that regret grows sub-linearly and limsupT→∞1T∑Tt=1gt(x(t))≤0, i.e., the (cumulative) constraint violation ∑Tt=1gt(x(t)) also grows sub-linearly. Unfortunately, Mannor et al. in [8] prove that this is impossible even when both ft(⋅) and gt(⋅) are simple linear functions.

Given the impossibility results shown by Mannor et al. in [8], this paper considers OCO where constraint functions gt(x) are not arbitrarily varying but independently and identically distributed (i.i.d.) generated from an unknown probability model. More specifically, this paper considers online convex optimization (OCO) with stochastic constraint X={x∈X0:Eω[gk(x;ω)]≤0,k∈{1,2,…,m}} where X0 is a known fixed set; the expressions of stochastic constraints Eω[gk(x;ω)] (involving expectations with respect to ω from an unknown distribution) are unknown; and subscripts k∈{1,2,…,m} indicate the possibility of multiple functional constraints. In OCO with stochastic constraints, the decision maker receives loss function ft(x) and i.i.d. constraint function realizations gtk(x)Δ=gk(x;ω(t)) at each round t. However, the expressions of gtk(⋅) and ft(⋅) are disclosed to the decision maker only after decision x(t)∈X0 is chosen. This setting arises naturally when decisions are restricted by stochastic environments or deterministic environments with noisy observations. For example, if we consider online routing (with link capacity constraints) in wireless networks [8]

, each link capacity is not a fixed constant (as in wireline networks) but an i.i.d. random variable since wireless channels are stochastically time-varying by nature

Let x∗=argmin{x∈X0:E[gk(x;ω)]≤0,∀k∈{1,2,…,m}}∑Tt=1ft(x) be the best fixed decision in hindsight (knowing all loss functions ft(x) and the distribution of stochastic constraint functions gk(x;ω)). Thus, x∗ minimizes the T-round cumulative loss and satisfies all stochastic constraints in expectation, which also implies limsupT→∞1T∑Tt=1gtk(x∗)≤0

almost surely by the strong law of large numbers. Our goal is to develop dynamic learning algorithms that guarantee both regret

Note that Zinkevich’s algorithm in (1) is not applicable to OCO with stochastic constraints since X is unknown and it can happen that X(t)={x∈X0:gk(x;ω(t))≤0,∀k∈{1,2,…,m}}=∅ for certain realizations ω(t), such that projections PX[⋅] or PX(t)[⋅] required in (1) are not even well-defined.

Our Contributions: This paper solves online convex optimization with stochastic constraints. In particular, we propose a new learning algorithm that is proven to achieve O(√T) expected regret and constraint violations and O(√Tlog(T)) high probability regret and constraint violations. Along the way, we developed new techniques for stochastic analysis, e.g., Lemma 5, and improve upon state-of-the-art results in the following special cases.

Let X0 be a known fixed compact convex set. Let gk(x;ω(t)),k∈{1,2,…,m} be sequences of functions that are i.i.d. realizations of stochastic constraint functions ~gk(x)Δ=Eω[gk(x;ω)] with random variable ω∈Ω from an unknown distribution. That is, ω(t) are i.i.d. samples of ω. Let ft(x) be a sequence of convex functions that can arbitrarily vary as long as each ft(⋅) is independent of all ω(τ) with τ≥t+1 so that we are unable to predict future constraint functions based on the knowledge of the current loss function. For example, each ft(⋅) can even be chosen adversarially based on ω(τ),τ∈{1,2,…,t} and actions x(τ),τ∈{1,2,…,t}. For each ω∈Ω, we assume gk(x;ω) are convex with respect to x∈X0. At the beginning of each round t, neither the loss function ft(x) nor the constraint function realizations gk(x;ω(t)) are known to the decision maker. However, the decision maker still needs to make a decision x(t)∈X0 for round t; and after that ft(x) and gk(x,ω(t)) are disclosed to the decision maker at the end of round t.

Now consider the following algorithm described in Algorithm 1. This algorithm chooses x(t+1) as the decision for round t+1 based on ft(⋅) and gt(⋅) without requiring ft+1(⋅) or gt+1(⋅).

For each stochastic constraint function gk(x;ω), we introduce Qk(t) and call it a virtual queue since its dynamic is similar to a queue dynamic. The next lemma summarizes that x(t+1) update in (2) can be implemented via a simple projection onto X0.

Note that if there are no stochastic constraints gtk(x), i.e., X=X0, then Algorithm 1 has Qk(t)≡0,∀t and becomes Zinkevich’s algorithm with γ=V2α in (1) since

where (a) follows from (2); and (b) follows from Lemma 1 by noting that d(t)=V∇ft(x(t)). Call the term marked by an underbrace in (4) the penalty. Thus, Zinkevich’s algorithm is to minimize the penalty term and is a special case of Algorithm 1 used to solve OCO over X0.

Let Q(t)=[Q1(t),…,Qm(t)]T be the vector of virtual queue backlogs. Let L(t)=12∥Q(t)∥2 be a Lyapunov function and define Lyapunov drift

The intention to minimize penalty is natural since Zinkevich’s algorithm (for OCO without stochastic constraints) minimizes penalty, while the intention to minimize drift is motivated by observing that gtk(x(t)) is accumulated into queue Qk(t+1) introduced in (3) such that we intend to have small queue backlogs. The drift Δ(t) can be complicated and is in general non-convex. The next lemma provides a simple upper bound of Δ(t) and follows directly from (3).

where m is the number of constraint functions; and D2,G and R are defined in Assumption 1.

where (b) follows from (9). Rearranging the terms yields the desired result. ∎

The next lemma relates constraint violations and virtual queue values and follows directly from (3).

Note that the expression involved in minimization (2) in Algorithm 1 is strongly convex with modulus 2α and x(t+1) is chosen to minimize it. Thus, the next lemma follows.

Let z∈X0 be arbitrary. For all t≥1, Algorithm 1 guarantees

The next corollary follows by taking z=x(t) in Lemma 4.

The next corollary follows directly from Lemma 3 and Corollary 1 and shows that constraint violations are ultimately bounded by sequence ∥Q(t)∥,t∈{1,2,…,T+1}.

For any T≥1, Algorithm 1 guarantees

where D1 and D2 are defined in Assumption 1.

This corollary further justifies why Algorithm 1 intends to minimize drift Δ(t). Recall that controlled drift can often lead to boundedness of a stochastic process as illustrated in the next section. Thus, the intuition of minimizing drift Δ(t) is to yield small ∥Q(t)∥ bounds.

This section shows that if we choose V=√T and α=T in Algorithm 1, then both expected regret and expected constraint violations are O(√T).

can be a random walk, a Markov chain or a martingale. Drift analysis is the method of deducing properties, e.g., recurrence, ergodicity, or boundedness, about

Z(t) from its drift E[Z(t+1)−Z(t)|F(t)]. See [21, 22] for more discussions or applications on drift analysis. This paper proposes a new drift analysis lemma for stochastic processes as follows:

Let {Z(t),t≥1} be a discrete time stochastic process adapted to a filtration {F(t),t≥1}. Suppose there exists an integer t0>0, real constants θ∈R, δmax>0, and 0<ζ≤δmax such that

The above lemma provides both expected and high probability bounds for stochastic processes based on a drift condition. It will be used to establish upper bounds of virtual queues ∥Q(t)∥, which further leads to expected and high probability constraint performance bounds of our algorithm. For a given stochastic process Z(t), it is possible to show the drift condition (12) holds for multiple t0 with different ζ and θ. In fact, we will show in Lemma 7 that ∥Q(t)∥ yielded by Algorithm 1 satisfies (12) for any integer t0>0 by selecting ζ and θ according to t0. One-step drift conditions, corresponding to the special case t0=1 of Lemma 5, have been previously considered in [22, 23]. However, Lemma 5 (with general t0>0) allows us to choose the best t0 in performance analysis such that sublinear regret and constraint violation bounds are possible.

Lemma 7 allows us to apply Lemma 5 to random process Z(t)=∥Q(t)∥ and obtain E[∥Q(t)∥]=O(√T),∀t by taking t0=⌈√T⌉, V=√T and α=T, where ⌈√T⌉ represents the smallest integer no less than √T. By Corollary 2, this further implies the expected constraint violation bound E[∑Tt=1gk(x(t))]≤O(√T) as summarized in the next theorem.

where the expectation is taken with respect to all ω(t).