A framework of online adaptive statistical compressed sensing is introduced for signals following a mixture model. The scheme first uses non-adaptive measurements, from which an online decoding scheme estimates the model selection. As soon as a candidate model has been selected, an optimal sensing scheme for the selected model continues to apply. The final signal reconstruction is calculated from the ensemble of both the non-adaptive and the adaptive measurements. For signals generated from a Gaussian mixture model, the online adaptive sensing algorithm is given and its performance is analyzed. On both synthetic and real image data, the proposed adaptive scheme considerably reduces the average reconstruction error with respect to standard statistical compressed sensing that uses fully random measurements, at a marginally increased computational complexity. 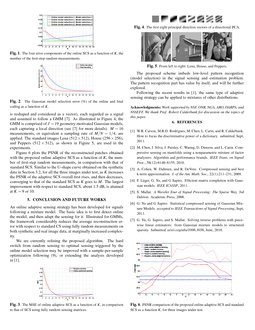 Compressed sensing (CS) aims at achieving accurate signal reconstruction while sampling signals at a low sampling rate, typically far smaller than that of Nyquist. Let x∈RN be a signal of interest, Φ∈RM×N a non-adaptive sensing matrix (encoder), consisting of M≪N measurements, y=Φx∈RM a measured signal, and Δ a decoder used to reconstruct x from Φx. CS develops encoder-decoder pairs (Φ,Δ) such that a small reconstruction error ∥x−Δ(Φx)∥X, where ∥⋅∥X is a norm, can be achieved.

Assuming a sparse signal model, i.e., the signal can be accurately represented in a dictionary with a few non-zero coefficients, the CS theory has shown that using random sensing matrices such as Gaussian or Bernoulli matrix Φ with M=O(klog(N/k)) measurements, and an l1 minimization or a greedy matching pursuit decoder Δ

∥x−Δ(Φx)∥X is tightly upper bounded by a constant times the best k-term approximation error in the sparse representation [cohen2009compressed].

While conventional CS deals with one signal at a time, statistical compressed sensing (SCS) aims at efficiently sampling a collection of signals and having accurate reconstruction on average. Assuming that the signals x

For signals following a Gaussian distribution, it has been shown that with

any sensing matrix of M=k measurements and the maximum a posteriori (MAP) linear decoder, SCS leads to a mean squared error (MSE) E∥x−Δ(Φx)∥2 upper bounded by a constant times the minimum MSE obtained with the k-term linear approximation in the principal direction analysis (PCA) basis that is optimal for Gaussian signals [yu2011SCS]. In particular, the error bound is tight when Gaussian or Bernoulli random sensing matrix is used [yu2011SCS]. For signals generated from a Gaussian mixture model (GMM), i.e., there exist multiple Gaussian distributions and each signal is generated from one of them with an unknown index, GMMs giving more precise description of most real signals than single Gaussian models, a piecewise linear decoder that calculates the signal reconstruction from each of the Gaussian models, and then selects the best one, has been introduced [yu2011SCS, yu2010PLE]. Additional theoretical results on the Gaussian model selection accuracy and overall reconstruction have been shown in [chen2010compressive].

SCS of GMM applies non-adaptive random sensing matrices because for the signal being sensed, the Gaussian model from which the signal is generated is a priori unknown. If it were known, one would then prefer sensing along the principal directions in the appropriate Gaussian, which leads to the minimum MSE.111This optimal MSE sensing for Gaussians is easy to prove, see next Section, while the optimal sensing for other distributions has been recently elegantly developed in [Carson2011]. The strategy here introduced can then be extended to mixtures beyond GMMs. More generally speaking, assume that the signals are generated from a mixture model, and an optimal sensing scheme is associated with each of the underlying models (e.g., following [Carson2011]). If for the current signal, its model were known before sensing, the optimal sensing scheme in that distribution would be preferred rather than using non-adaptive measurements.

This paper follows this line of thoughts and introduces an online adaptive sensing framework for signals generated from a mixture model. The scheme imbeds an online model selection and a switch from non-adaptive to adaptive sensing. To sense a signal, non-adaptive measurements are first used, from which an online decoding scheme calculates the model selection. As soon as a model has been selected, the optimal sensing scheme of the selected model then continues to apply. The final signal reconstruction is calculated from the ensemble of both the non-adaptive and the adaptive measurements.

As an important example, this online adaptive sensing is here illustrated for signals following a GMM. Not only GMMs have been shown to lead to results in the ballpark of the state-of-the-art in various inverse problems for different types of real data [leger2010Matrix, yu2010PLE], theoretical results on statistical compressed sensing of GMM have also been recently given [chen2010compressive, yu2011SCS].

Section 2 recalls the main results of SCS of GMM [yu2011SCS] based on which the online SCS of GMM will be developed. An algorithm for the online adaptive SCS of GMM is then given in Section 3, and its performance is analyzed and compared against standard SCS using fully random sensing. In Section 4 the proposed online adaptive SCS is applied in real image data sensing, leading to considerably improved results with respect to standard SCS, at a marginally increased computational complexity. Concluding remarks and future work are discussed in Section 5.

Signals x∈RN are assumed to follow a Gaussian distribution N(μ,Σ), where μ and Σ are respectively its mean and covariance. Without loss of generality, the Gaussian mean is assumed zero, μ=0

, as one can always center the signal with respect to the mean. Principal Component Analysis gives the orthonormal PCA basis

are the sorted eigenvalues

[mallat2008wts]. It is well known that for Gaussian signals a linear approximation in the PCA basis minimizes the mean squared error (MSE). Putting this in the signal sensing context, a sensing matrix

where bn is the n-th principal direction of the Gaussian, i.e., the n-th column in B, and a linear decoder

minimize the MSE amongst all sensing matrices Φ∈RM×N and any decoder Δ:

where σ2M denotes the minimum MSE.

For Gaussian signals, it has been shown that any sensing matrix Φ∈RM×N and the maximum a posteriori (MAP) linear decoder Δ=ΣΦT(ΦΣΦT)−1 lead to an MSE upper bounded by a constant times the minimum MSE [yu2011SCS]:

Assume x∼N(0,Σ). Let Φ be an M×N sensing matrix and Δ=ΣΦT(ΦΣΦT)−1 the optimal and linear decoder. Then

The bound constant C0 in Theorem 1 can be obtained via Monte Carlo simulations. For Gaussian and Bernoulli matrices, a small C0≈4.5 has been shown, i.e., the error bound is tight [yu2011SCS].

SCS of GMM applies non-adaptive random sensing matrices because for the signal to be sensed, the Gaussian model from which the signal is generated is a priori unknown. If it were known, one would then prefer sensing along the principal directions in the appropriate Gaussian, which leads to the minimum MSE.

The online adaptive SCS improves the accuracy of SCS by first selecting online the Gaussian model, and then adapts the measurements as a function of the model selection. It starts by performing non-adaptive random measurements, based on which the piecewise linear decoder estimates online the Gaussian model for the signal being sensed. As soon as the Gaussian model is selected, for the rest of the measurements it switches to the principal direction sensing in the selected Gaussian. As long as the online model selection is correct, the adaptive sensing along the principal directions in the appropriate Gaussian leads to a smaller MSE than applying fully random sensing.

Assume that M≤N measurements are dedicated to sensing the signal. The online SCS algorithm proceeds as follows.

Contrary to the conventional CS and SCS that apply linear sensing, the sensing of the online adaptive SCS is nonlinear, as the principal direction sensing matrix ΦM−K in Step 3 depends on the Gaussian model selection estimated from the random measurements sensed in Step 1.

The online adaptive sensing algorithm marginally increases the computational complexity with respect to standard SCS using fully random measurements. The sensing complexity is the same, but the online SCS has an additional online decoding step. The complexity of decoding (4) is dominated by the M×M matrix inversion, which requires M3/3 floating-point operations (flops) [yu2010PLE]. With a GMM comprised of J Gaussian distributions, the online and the final decoding steps are respectively calculated in JK3/3 and JM3/3 flops. As K≤M, the additional online decoding brings a marginal increase in computational complexity.

To further understand the behavior of the four error components, Monte Carlo simulation is performed to check them on synthetic data. The data set up follows that in [yu2011SCS], emulating standard behavior of image patches: the signals are of dimension N=64; the eigenvalues of the Gaussians follow a power decay law λm=m−α, 1≤m≤N, with a typical value α=2; the two Gaussians are “orthogonal” one another, i.e., BT1B2=Ilr, where B1 and B2 are the PCAs of the two Gaussians, and Ilr

is the left-right flipped identity matrix. The sensing matrix

Φ contains M=16 measurements (sampling rate 1/4), and the number K of random measurements varies from 1 to M. The Gaussian model selection is more accurate as the two Gaussians are orthogonal (see also [chen2010compressive]). On the other hand, when the online model selection is erroneous, the resulting principal direction sensing in the wrong Gaussian is the farthest possible from optimal.

Monte Carlo simulations further show that a similar U-shape graph is obtained with different M values and the Gaussian eigenvalue decay parameter α: The online SCS has the lowest MSE with K in the order of M/2, and the ratio between the MSE of the online adaptive SCS and the standard SCS is smaller as α and M increase.

The online adaptive SCS is applied in real image sensing, and compared with SCS using fully random measurements. The latter has been reported to bring about 0.5 to 3.5 dB improvement in PSNR at various sample rates with respect to conventional CS based on sparse models [yu2011SCS].

Following a common practice, an image is decomposed into √N×√N=8×8 non-overlapping local patches (an image patch is reshaped and considered as a vector), each regarded as a signal and assumed to follow a GMM [yu2010PLE]. As illustrated in Figure 4, the GMM is comprised of J=19 geometry-motivated Gaussian models, each capturing a local direction (see [yu2010PLE] for more details). M=16 measurements, or equivalent a sampling rate of M/N=1/4, are applied. The standard images Lena (512×512), House (256×256), and Peppers (512×512), as shown in Figure 5, are used in the experiments.

Figure 6 plots the PSNR of the reconstructed patches obtained with the proposed online adaptive SCS as a function of K, the number of first-step random measurements, in comparison with that of standard SCS. Similar to the U-shape curve obtained on the synthetic data in Section 3.2, for all the three images under test, as K increases the PSNR of the adaptive SCS overall first rises, and then decreases, converging to that of the standard SCS as K goes to M. The largest improvement with respect to standard SCS, about 1.5 dB, is attained at K=9 or 10.

An online adaptive sensing strategy has been developed for signals following a mixture model. The basic idea is to first detect online the model, and then adapt the sensing for it. Illustrated for GMMs, the framework considerably reduces the average reconstruction error with respect to standard CS using fully random measurements on both synthetic and real image data, at marginally increased complexity.

We are currently refining the proposed algorithm. The hard switch from random sensing to optimal sensing triggered by the online model selection may be improved with a sample-per-sample optimization following (9), or extending the analysis developed in [Carson2011].

Following the recent results in [Carson2011], the same type of adaptive sensing strategy can be applied to mixtures of other distributions.

Acknowledgments: Work supported by NSF, ONR, NGA, ARO, DARPA, and NSSEFF. We thank Prof. Robert Calderbank for discussion on the topics of this paper.