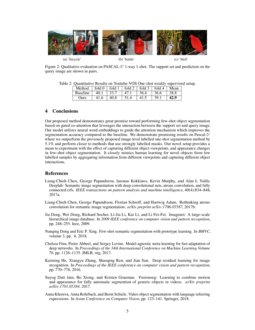 We address the problem of localisation of objects as bounding boxes in i...
Zhiyuan Shi, et al. ∙

We address the problem of localisation of objects as bounding boxes in i...
Zhiyuan Shi, et al. ∙

In order to improve image-level few-shot object segmentation we propose a multi-modal interaction module that leverages the interaction between support and query visual features and word embeddings. The use of neural word embeddings pretrained on GoogleNews Mikolov et al. (2013)

and visual embeddings from pretrained networks on ImageNet

Deng et al. (2009) allows to build such a model. We propose a novel approach that uses Stacked Co-Attention to leverage the interaction among visual and word embeddings. We mainly inspire from Lu et al. (2019) which proposed a co-attention siamese network for unsupervised video object segmentation. However, our setup mainly focuses on the few-shot object segmentation aspect to assess its ability to generalize to novel classes. This aspect motivates why we meta-learned a multi-modal interaction module that leverages the interaction between support and query with image-level supervision.

It is important to initially capture the class label semantic representation through using semantic word embeddings Mikolov et al. (2013) before performing the co-attention. The main reason is that both the support set and query set can contain multiple common objects from different classes, so depending solely on the support-to-query attention will fail in this case. A projection layer is used on the semantic word embeddings to construct z∈Rd where d is 256. It is then spatially tiled and concatenated with the visual features resulting in ~Vs and ~Vq

S is then computed to capture the similarity between them using equation 1.

The feature maps are flattened into matrix representations where ~Vq∈RC×WH and ~Vs∈RC×WH, while Wco∈RC×C learns the correlation between feature channels. We use a vanilla co-attention similar to Lu et al. (2019) where Wco is learned using a fully connected layer. The resulting affinity matrix S∈RWH×WH relates each column from ~Vq and ~Vs. A softmax operation is performed on the S row-wise and column-wise depending on what relation direction we are interested in following equations 2a and 2b.

Sc∗,j has the relevance of the jth spatial location in Vq with all spatial locations of Vs, where j=1,...,WH. The normalized affinity matrix can be used to compute Uq using equation 3 and Us similarly. Uq and Us act as the attention summaries.

. The gating function ensures the output to be in the interval [0, 1] in order to mask the attention summaries using a sigmoid activation function

The gated attention summaries Uq are concatenated with the original visual features Vq and reshaped back to construct the final output from the attention module. Figure 1 demonstrates our proposed method. We utilize a ResNet-50 He et al. (2016) encoder pre-trained on ImageNet Deng et al. (2009) to extract visual features. The segmentation decoder is comprised of an iterative optimization module (IOM) Zhang et al. (2019b) and an atrous spatial pyramid pooling (ASPP) Chen et al. (2017a)Chen et al. (2017b). In order to improve our model we use two stacked co-attention modules. It allows the model to learn a better representation by letting the support set guide the attention on the query image and the reverse with respect to the support set through multiple iterations.

We propose a novel setup for few-shot video object segmentation where we utilize image-level labelled first frame to learn object segmentation in the sequence rather than using manual segmentation masks. More importantly the setup is devised in a way to split the categories to multiple folds to assess the generalization ability to novel classes. We utilize Youtube-VOS dataset training data which has 65 categories, and we split into 5 folds. Each fold has 13 classes that are used as novel classes, while the rest are used in the meta-training phase. A randomly sampled category Ys and sequence V={I1,I2,...,IN} is used to construct support set Sp={(I1,Ys)} and query images Ii.

In this section we demonstrate results from experiments conducted on the PASCAL-5i dataset Shaban et al. (2017) which is the most widely used dataset for evaluating few-shot segmentation. We also conduct experiments on our novel few-shot weakly supervised video object segmentation.

We report two evaluation metrics, the mean-IoU computes the intersection over union for all 5 classes within the fold and averages them neglecting the background

We compare the result of our proposed method with stacked co-attention against the other state of the art methods for 1-way 1-shot segmentation on pascal-5i in Table 1 using mean-IoU and binary-IoU metrics. We report the results for both the two validation schemes where V1 is following Zhang et al. (2019b) and V2 is following Wang et al. (2019) validation scheme. Without the utilization of segmentation mask or even sparse annotations, our method with the least supervision of image level labels performs relatively on-par 53.5% compared to the current state of the art methods 56% showing the efficacy of our proposed algorithm. It outperforms the previous one-shot weakly supervised segmentation Raza et al. (2019) with 5.1%. Our proposed model outperforms the baseline method which utilizes a co-attention module without using word embeddings. Figure 2 shows the qualitative results for our proposed approach.

Our proposed method demonstrates great promise toward performing few-shot object segmentation based on gated co-attention that leverages the interaction between the support set and query image. Our model utilizes neural word embeddings to guide the attention mechanism which improves the segmentation accuracy compared to the baseline. We demonstrate promising results on Pascal-5i where we outperform the previously proposed image-level labelled one-shot segmentation method by 5.1% and perform closer to methods that use strongly labelled masks. Our novel setup provides a mean to experiment with the effect of capturing different object viewpoints, and appearance changes in few-shot object segmentation. It closely mimics human learning for novel objects from few labelled samples by aggregating information from different viewpoints and capturing different object interactions.