Recently, semiconductors' demand has exploded in virtual reality, smartphones, wearable devices, the internet of things, robotics, and automobiles. Semiconductor manufacturers want to make semiconductors with high yields. To do this, manufacturers conduct many quality assurance activities. Wafer map pattern classification is a typical way of quality assurance. The defect pattern on the wafer map can tell us which process has a problem. Most of the existing wafer map classification methods are based on supervised methods. The supervised methods tend to have high performance, but they require extensive labor and expert knowledge to produce labeled datasets with a balanced distribution in mind. In the semiconductor manufacturing process, it is challenging to get defect data with balanced distribution. In this paper, we propose a one-class classification method using an Adversarial Autoencoder (AAE) with Deep Support Vector Data Description (DSVDD) prior, which generates random vectors within the hypersphere of DSVDD. We use the WM-811k dataset, which consists of a real-world wafer map. We compare the F1 score performance of our model with DSVDD and AAE. 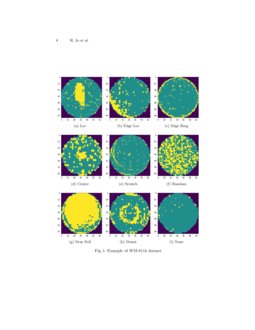 After the fabrication process, wafers are tested to check their electrical characteristics at the die on the wafer [mann2004leading]. After the test, the results are represented as an image with information about dies that are malfunctioned and where the defect dies are located. We call this image a wafer map. The defects on the wafer map can be categorized into some classes with spatial defect similarity: Loc, Edge-Loc, Edge-Ring, Center, Scratch, Random, Near-full, Donut, None. Some defect classes can help engineers in the manufacturer to recognize specific problems in the process [hansen1997monitoring, yuan2011detection]. For example, inappropriate wafer handling manipulation may arise to a scratch pattern, layer misalignment during the storage node process can cause edge-ring pattern, and a uniformity problem at the chemical-mechanical planarization may make center pattern [yuan2011detection].

The basic method for classification of wafer map

. In accordance with this trend, deep neural networks are applied in semiconductor manufacturing.

Traditionally, supervised methods are used for wafer map classification. These methods require a lot of labels made by visual check from skillful engineers with their experience, knowledge, and intuition[shankar2005defect]. However, Annotating label to a large number of wafer maps manually is expensive and takes a lot of time[baly2012wafer]. Furthermore, when the engineers work long hours, they may feel fatigued, and it can cause miss classification. [tan2011automated]. Therefore there are a lot of requirements for automated wafer map pattern classification.

There are two types of problems for wafer map classification that are actively researched. First problem is to handle the imbalanced dataset. After the process has stabilized, defect wafers hardly occur. For this reason, it is hard to get defect data. Furthermore, it is almost impossible to get balanced defect data over defect type. To overcome this problem, one common way is to generate artificial data containing defective images using generative models before the training stage. For example, in [ji2020using], researchers used a deep convolutional generative model for generating faulty images. And, in [liu2021focal]

Second problem is the difficulty of getting a labeled data. Many semiconductor manufacturers try to apply the latest technology like deep learning, artificial intelligence. However, data that manufacturers already have is not preferred to apply the technology. Moreover, most of these data are without the label; thus, it needs additional labor for assigning the label. There are several ways to get over this problem. The first one is using active learning. Active learning is the way to use small labeled data and a lot of unlabeled data. This model learns with small labeled data and selects the most ambiguous data in the unlabeled dataset. Engineers or something called Oracle are then asked to label the selected ambiguous data. Then repeat the process by adding data labeled by Oracle until certain conditions are satisfied. In

[koutroulis2020enhanced], researchers select the most ambiguous data using uncertainty and Density-based Spatial Clustering of Application with Noise (DBSCAN). The other one is using clustering methods.

In this paper, we proposed an adversarial autoencoder-based one-class classification method. One-class classification learns a normal data distribution at the training stage and determines whether the input is similar to trained data or not. To do this, we use an adversarial autoencoder with DSVDD prior, which generates a random vector within the hypersphere. We use the public dataset of wafer map, called WM-811K  [wu2014wafer], for performance evaluations and compare our model with AAE and DSVDD with identical architecture.

Due to the success of deep learning in many areas, deep learning methods have been applied to wafer map classification tasks. These approaches use the raw wafer map as an input and automatically extract features. In [nakazawa2018wafer], researchers used CNN for wafer classification first time and generated a synthetic wafer map using the Poisson point process. In [nakazawa2019anomaly], the authors used a convolutional autoencoder for detecting and segmenting defect patterns. [yu2019stacked]

[kong2020semi], researchers used the Ladder Network and semi-supervised classification framework for using labeled and unlabeled datasets. In [kim2021wafer], the authors used out-of-distribution data, which is undefined in the training dataset, for improving classification performance.

One-class support vector machine (OC-SVM) is the classic one-class classification method. It is a special type of SVM that holds labels at the training stage. Support Vector Data Description (SVDD) [tax2004support] is advanced version of one-class SVM. SVDD maps all the training data consisting of only normal into kernel space and finds the hypersphere containing all the data points in the kernel space with the smallest volume. After the training stage, the model finds the hypersphere’s center and radius, satisfying the condition, and we can detect anomalies when the data is outside of the hypersphere.

Deep SVDD [ruff2018deep] is inspired SVDD and changes the kernel in SVDD to a deep neural network. The neural network is trained to have the smallest hypersphere that contains the latent vector of data in the latent space, with loss, Equation 1.

where D,G represent discriminator and generator, respectively, θ is the parameter of generator or discriminator network, z is the random noise vector that is used as an input to the generator. We use the Adversarial autoencoder (AAE) for experiments. AAE is a network that combines autoencoder with adversarial learning. A discriminator in AAE determines whether the latent vector is from the real data or not, making the encoder acts as a generator in the GAN. The difference between GAN and AAE loss is adding an L1 loss for reconstruction. The total loss of AAE is the Equation 3

where e,d is encoder and decoder, L1 is L1 loss.

where zi is ith latent vector component, ci is the ith center vector of the hypersphere, and σ

is the standard deviation for Gaussian distribution.

When a random vector is extracted from Equation 4, it cannot guarantee the distance between vector and the center of the hypersphere is less than the radius of the hypersphere, or at least close to the radius. To overcome this problem, we need to handle the standard deviation in the Gaussian distribution. The expectation of the square distance can be calculated using Equation 5

where Z is the random vector, N is the dimension of the latent space, μ,σ

are mean and variance of the Gaussian distribution. We use the fact that mean is 0 at final term.

We want the expected distance to be the radius of the hypersphere. Like Equation 6, the variance become the value R2/N

where R is the radius of hypersphere.

Than total distribution of DSVDD is Equation  7

where Z is the random vector, C is the center of the hypersphere, and ν is hyper parameter for handling the expectation distance.

All parts of the network are consist of linear layers. The encoder has separated two linear layers at the final layer to generate mean and variance vectors used for variational inference. The input images are consist of 3 channels; each channel represents margin, normal, and defect. At the pixel in the input image, only one of the channels has value 1 and others have 0. Due to the characteristics of input images, we added a softmax layer to the last layer of the decoder. And other components of the network are identical to the adversarial autoencoder. The model needs to map the training data inside the hypersphere. To do this, we use AAE loss, Equation

3 with a DSVDD loss, Equation 1. On the other hand, we use the loss as an anomaly score for classification.

For experiments, we used WM-811K dataset, which is real-world trace data obtained from a semiconductor manufacturer  [wu2014wafer]. It contains about 800,000 images with both labeled and unlabeled data. Around 630,000 of the data is without the label, and 170,000 of the data is with the label. There are nine distinctive labels with uneven distribution. You can see the details in Table  1.

Engineers can infer the root cause of the device by defect pattern class. In this class, None pattern is a normal pattern, and others are defect pattern. You can see the example of label of Wafer Bin Map of each type in Fig  1.

In this experiment, we used only normal data at the training stage, like other one-class classification frameworks. Then the data with defects are used at the validation and test stage. We re-labeled all defects patterns into one class since our task is only to classify normal data and defect data. We split the data into training, validation, and test data. There is only none type data in the training set and 80% of all none type data. There is 10% of all none type data in the validation set, and there are other patterns with 50% of all each pattern. The rest of the datasets were used as test sets. You can show the detail in the Table  2.

We also need to match the size of the images since the images in the dataset have various sizes. We change the image size to 64 by 64.

We used the threshold that have best performance at the validation dataset, to evaluate the test dataset. As an evaluation metric, we use accuracy, precision, recall, and F1 score. We input the label and inference result to functions of ‘metric’ module in ‘sklearn’ python package, accuracy_score, precision_score, recall_score, f1_score.

Table 3 shows the results of the performance on the validation and test datasets. There is no significant difference between validation and test datasets. It might be the fact that the two datasets have the same ratio of the classes. Looking at each model, DSVDD showed the lowest performance except recall, accuracy, and precision are low under 0.5. It means that DSVDD can’t map many normal data within the hypersphere. AAE has a similar recall with DSVDD but has high accuracy and precision score than DSVDD. This suggests that AAE maps normal data well to the center of the posterior rather than DSVDD mapping data to the center of the hypersphere. Our model has highest F1 score rather than others, but recall decrease. It might be the evidence that the DSVDD prior acts as constraint to get more none data.

Second, we need to check the performance of each defect pattern. We want this model to apply real world, but it has low performance at the whole criterion. To improve the model’s performance, we need to analyze miss classification. For the same reason, we should check the change of performance as a varying threshold. Threshold has an essential role in anomaly detection, and it is crucial to characterize performance as the threshold changes.