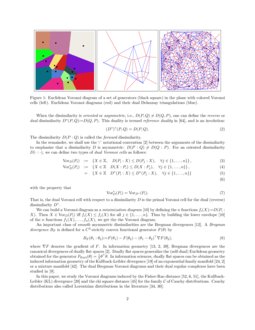 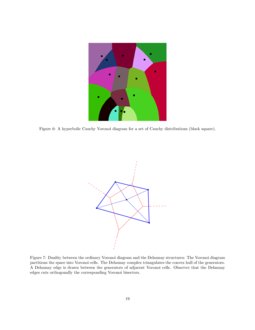 Let P={P1,…,Pn} be a finite set of points in a space X equipped with a measure of dissimilarity D(⋅,⋅):X×X→R+. The Voronoi diagram [49] of P partitions X into elementary Voronoi cells Vor(P1),…,Vor(Pn) (also called Dirichlet cells [7]) such that

denotes the proximity cell of point generator Pi, i.e., the locii of points X∈X closer to Pi than to any other generator Pj.

When the dissimilarity is oriented or asymmetric, i.e., D(P,Q)≠D(Q,P), one can define the reverse or dual dissimilarity D∗(P,Q):=D(Q,P). This duality is termed reference duality in [64], and is an involution:

In the remainder, we shall use the ‘:’ notational convention [4] between the arguments of the dissimilarity to emphasize that a dissimilarity D is asymmetric: D(P:Q)≠D(Q:P). For an oriented dissimilarity D(⋅:⋅), we can define two types of dual Voronoi cells as follows:

The paper is organized with our main contributions as follows:

In Section 2, we concisely review the information geometry of the Cauchy family: We first describe the hyperbolic Fisher-Rao geometry in §2.1 and make a connection between the Fisher-Rao distance and the chi square divergence, then we point out the remarkable fact that any α-geometry coincides with the Fisher-Rao geometry (§2.2), and we finally present the dually flat geometric structures on the Cauchy manifold related to Tsallis’ quadratic entropy [59] which amount to a conformal flattening of the Fisher-Rao geometry (§2.4). Section 3.3 proves that the square root of the KL divergence between any two Cauchy distributions yields a metric distance (Theorem 3), and that this metric distance can be isometrically embedded in a Hilbert space for the case of the Cauchy scale families (Theorem 4). Section 4 shows that the Cauchy Voronoi diagram induced either by the Fisher-Rao distance, the chi-square divergence, or the Kullback-Leibler divergence (and its square root metrization) all coincide with a hyperbolic Voronoi diagram calculated on the Cauchy location-scale parameters. This result yields a practical and efficient construction algorithm of hyperbolic Cauchy Voronoi diagrams [41] (Theorem 5) and their dual hyperbolic Cauchy Delaunay complexes. We prove that the hyperbolic Cauchy Voronoi diagrams are Fisher orthogonal to the dual Delaunay complexes (Theorem 6). Finally, we conclude this work in §5.

2 Information geometry of the Cauchy family

2.1 Fisher-Rao geometry of the Cauchy manifold

investigates the geometry of families of probability measures. The 2D family

is a location-scale family [33] (and also an elliptical distribution family [32]) where l∈R and s>0 denote the location parameter and the scale parameter, respectively:

is the Cauchy standard distribution.

Let lθ(x):=logpθ(x) denote the log density. The parameter space H:=R×R+ of the Cauchy family is called the upper plane. The Fisher-Rao geometry [27, 52, 51] of C consists in modeling C as a Riemannian manifold (C,gFR) by choosing the Fisher information metric [4]

as the Riemannian metric tensor, where

The Fisher-Rao distance ρFR[pλ1,pλ2]=ρFR[pl1,s1,pl2,s2] is then defined as the Riemannian geodesic length distance on the Cauchy manifold (C,gFR):

The Fisher information metric tensor for the Cauchy family [32] is

However, by noticing that the metric tensor for the Cauchy family of Eq. 14 is equal to the scaled metric tensor gP of the Poincaré (P) hyperbolic upper plane [5]:

we get a relationship between the square infinitesimal lengths (line elements) ds2FR=dl2+ds22s2 and ds2P=dx2+dy2y2 as follows:

It follows that the Fisher-Rao distance between two Cauchy distributions is simply obtained by rescaling the 2D hyperbolic distance expressed in the Poincaré upper plane [5]:

This latter term δ shall naturally appear in §2.4 when studying the dually flat space obtained by conformal flattening the Fisher-Rao geometry. The expression δ(l1,s1,l2,s2) of Eq.23 can be interpreted as a conformal divergence for the squared Euclidean distance [47].

We may also write the delta term using the 2D Cartesian coordinates λ=(λ(1),λ(2)) as:

In particular, when l1=l2, we get the simplified Fisher-Rao distance for the Cauchy scale family:

The Fisher-Rao distance between two Cauchy distributions is

It is well-known that the Fisher-Rao geometry of location-scale families amount to a hyperbolic geometry [33]. For d-variate scale-isotropic Cauchy distributions pλ(x) with λ=(l,s)∈Rd×R, the Fisher information metric is gFR(λ)=12s2I, where I denotes the (d+1)×(d+1)identity matrix. It follows that

where ∥⋅∥ is the d-dimensional Euclidean norm: ∥x∥=x⊤x. That is, ρFR is the scaled d-dimensional real hyperbolic distance [5] expressed in the Poincaré upper space model.

Recently, the Riemannian geometry of location-scale models has also been studied from the complementary viewpoint of warped metrics [14, 54].

2.2 The dualistic α-geometry of the statistical Cauchy manifold

A statistical manifold [29] is a triplet (M,g,T) where g is a Riemannian metric tensor and T a cubic totally symmetric tensor (i.e., Tσ(i)σ(j)σ(k)=Tijk for any permutation σ). For a parametric family of densities M={pλ(x)}, the cubic tensor is called the skewness tensor [4], and defined by:

A statistical manifold structure (M,g,T) allows one to construct Amari’s dualistic α-geometry [4] for any α∈R: Namely a quadruplet (M,gFR,∇−α,∇α) where ∇−α and ∇α are dual affine connections (i.e., ∇−α=(∇α)∗). We refer the reader to the textbook [4] and the overview [45] for further details concerning the dual torsion-free affine connections coupled with the metric tensor.

The Fisher-Rao geometry (M,gFR) corresponds to the 0-geometry, i.e., the self-dual geometry where ∇0=g∇ is the Levi-Civita metric connection [4]: (C,gFR)=(C,gFR,∇0,∇0).

In information geometry, the invariance principle

A remarkable fact is that all the α-geometries of the Cauchy family coincide with the Fisher-Rao geometry since the cubic skewness tensor T vanishes everywhere [32], i.e., Tijk=0. The non-zero coefficients of the Christoffel symbols of the α-connections (including the Levi-Civita metric connection derived from the Fisher metric tensor) are:

All α-geometries coincide and have constant negative scalar curvature κ=−2. In other words, we cannot choose a value for α to make the Cauchy manifold dually flat [4]. To contrast with this result, Mitchell [32] reported values of α for which the α-geometry is dually flat for some parametric location-scale families of distributions: For example, it is well known that the manifold N

of univariate Gaussian distributions is

±1-flat [4]. The manifold Sk of t-Student’s distributions with kdegrees of freedom is proven dually flat when α=±k+5k−1 [32]. Dually flat manifolds are Hessian manifolds [56] with dual geodesics being straight lines in one of the two dual global affine coordinate systems. On a global Hessian manifold, the canonical divergences are Bregman divergences. Thus these dually flat Bregman manifolds are computationally friendly [9] as many techniques of computational geometry can be naturally extended to these spaces [40].

2.3 Dualistic structures induced by a divergence

A divergence or contrast function [24] is a smooth parametric dissimilarity. Let M denote the manifold of its parameter space. Eguchi [24] showed how to associate to any divergence D a canonical information-geometric structure (M,Dg,D∇,D∇∗). Moreover, the construction allows to prove that D∇∗=D∗∇ (see [4, 45] for details). That is the dual affine connection associated to D coincides with the primal connection associated to the dual divergence D∗. Conversely, Matsumoto [31] proved that given an information-geometric structure (M,g,∇,∇∗), one can build a divergence D such that (M,g,T)=(M,Dg,DT) from which we can derived the structure (M,Dg,D∇,D∇∗). Thus when calculating the Voronoi diagram VorD for an arbitrary divergence D, we may use the induced information-geometric structure to investigate some of its properties. For example, is the bisector BiD D∇-autoparallel?, or is the bisector BiD of two generators orthogonal with respect to the metric Dg to their D∇-geodesic? Section 4 will study these questions.

2.4 Dually flat geometry of the Cauchy manifold by conformal flattening

When q=2, we have the following Tsallis’ quadratic entropy:

denote the deformed q-exponential and

its compositional inverse, the deformed q-logarithm. The probability density of a 2-Gaussian can be factorized as

where θ denotes the 2D natural parameters. We have

Therefore the natural parameter is (for t(x)=(x,x2)) and the deformed log-normalizer is

In general, we obtain a strictly convex and C3-function Fq(θ), called the q-free energy for a q-Gaussian family. Here, we let F(θ):=F2(q) for the Cauchy family.

We convert back the natural parameter θ∈Θ to the ordinary parameter λ∈H as follows:

The gradient of the deformed log-normalizer is

It follows the following divergence Dflat[pλ1:pλ2] [4] between Cauchy densities which is by construction equivalent to a Bregman divergence BF(θ1:θ2) between their corresponding natural parameters:

We used a computer algebra system (CAS, see Appendix A) to calculate the closed forms of the following definite integrals:

Here, observe that the equivalent Bregman divergence is not on swapped parameter order as it is the case for ordinary exponential families: DKL[pθ1:pθ2]=BF(θ2:θ1) where F is the cumulant function of the exponential family, see [4, 45].

The flat divergence Dflat[pλ1:pλ2] between two Cauchy distributions is equivalent to a Bregman divergence BF(θ1:θ2) on the corresponding natural parameters with the following closed-form formula in the ordinary location-scale parameterization:

In general, we call the Bregman divergence arising from the q-Gaussian flattening the q-Bregman-Tsallis divergence BFq.

is the Legendre-Fenchel convex conjugate [4]:

that is independent of the location parameter l. Moreover, we have [4]

We can convert the dual parameter η to the ordinary parameter λ∈H as follows:

It follows that we have the following equivalent expressions for the flat divergence:

is the Legendre-Fenchel divergence measuring the inequality gap of the Fenchel-Young inequality:

The Hessian metrics of the dual convex potential functions F(θ) and F∗(η) are:

where I denotes the 2×2 identity matrix.

The Hessian metric ∇2F(θ) is also called the q-Fisher metric [58] (for q=2). Let gλFR(λ) and gθFR(θ) denote the Fisher information metric expressed using the λ-coordinates and the θ-coordinates, respectively. Then, we have

where Jacλ(θ) denotes the Jacobian matrix:

Similarly, we can express the Hessian metric gF:=∇2F(θ) using the λ-coordinate system:

We have the following Jacobian matrices:

We check that we have

That is, the Riemannian metric tensors gλFR(λ) and gλF(λ) are conformally equivalent for a smooth function u(λ).

can be interpreted as a conformal flattening of the curved α-geometry [58, 4, 48]. The relationships between the curvature tensors of dual connections is studied in [65].

The KL divergence is a f-divergence obtained for the generator f(u)=−logu.

Using change of variables in the integrals, one can show that

Using symbolic integration described in Appendix A, we found that