Reducing youth tobacco use is critical for improving child health since tobacco use is associated with respiratory problems, and nicotine may interfere with healthy brain development. While tobacco regulation has contributed to declines in cigarette use among youth, these declines have occurred more quickly for youth of high socioeconomic status (SES) compared to youth of low SES. A major barrier to smoking cessation for adolescents of low SES is coordination of access and transportation to in-person treatment sessions. Low-SES youth may have family obligations that limit their ability to access in-person treatment. At the same time, mobile use among adolescents is high: 85 rates, suggesting that they are well-suited for mobile instant messaging interventions. Mobile interventions have shown promise for youth, but their use remains low. Thus, more research is needed to develop effective and engaging mobile interventions to increase quit rates. In this paper, we provide a brief review of approaches to adolescent smoking cessation and describe the promise of chatbots for smoking cessation. 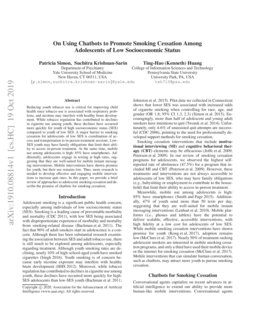 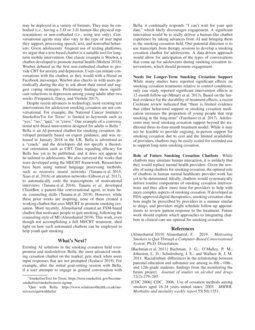 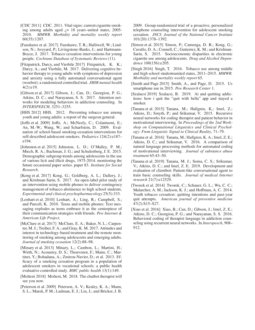 Associations between park features, park satisfaction and park use in a multi-ethnic deprived urban area

Reflections, Learnings and Proposed Interventions on Data Validation and Data Use for Action in Health: A Case of Mozambique

The ideal of a country's health information system (HIS) is to develop p...
Nilza Collinson, et al. ∙

A Mobile Food Recommendation System Based on The Traffic Light Diet

Adolescent smoking is a significant public health concern, especially among individuals of low socioeconomic status (SES). Smoking is a leading cause of preventable morbidity and mortality [nih25], with low SES being associated with disproportionate experience of morbidity and mortality from smoking-related disease [nih3]. The fact that 90% of adult smokers start in adolescence is a concern. Although there has been substantial research examining the association between SES and adult tobacco use, there is still much to be explored among adolescents, especially regarding treatment. Although youth smoking rates are declining, nearly 10% of high-school-aged youth have smoked cigarettes [nih26]. Youth smoking is of concern because early nicotine exposure may interfere with healthy brain development [nih1]. Moreover, while tobacco regulation has contributed to declines in cigarette use among youth, these declines have occurred more quickly for high-SES adolescents than low-SES youth [nih3, nih4]

. Pilot data we collected in Connecticut shows that lower SES was associated with increased odds of cigarette smoking when controlling for race, age, and gender (OR 1.8; 95% CI 1.3, 2.3)

[simon2015socioeconomic]. Encouragingly, more than half of adolescent and young adult smokers have intentions to quit [nih5]. Unfortunately, only 4-6% of unassisted quit attempts are successful [nih6], pointing to the need for professionally developed support methods for smoking cessation.

Smoking cessation interventions that include motivational interviewing (MI) and cognitive behavioral therapy (CBT) elements may be efficacious [nih27, nih28]. In our review of smoking cessation programs for adolescents, we observed the highest self-reported rate of abstinence (47.5%) for a program that included MI and CBT [nih28]. However, these treatments and interventions are not always accessible to adolescents of low SES, who may have family obligations (e.g., babysitting or employment to contribute to the household) that limit their ability to access in-person treatment.

Conversational agents capitalize on recent advances in artificial intelligence to extend our ability to provide more human-like mobile interventions. Conversational agents may be deployed in a variety of formats. They may be embodied (i.e., having a 2-D or 3-D human-like physical representation) or non-embodied (i.e., using text only). Conversational agents may also vary in the type of user input they support, processing speech, text, and nonverbal behaviors. Given adolescents’ frequent use of texting platforms, we argue that a text-based chatbot is a suitable tool for long-term mobile intervention. One classic example is Woebot, a chatbot developed to promote mental health [molteni_2018]. Woebot debuted as the first non-embodied chatbot to provide CBT for anxiety and depression. Users can initiate conversations with the chatbot, as they would with a friend on Facebook messenger. Woebot also checks in with users periodically during the day to ask about their mood and suggest coping strategies. Preliminary findings show significant reductions in depression among young adults after two weeks [nih33].

Despite recent advances in technology, most existing text interventions for adolescent smoking cessation are not conversational. For example, the National Cancer Institute’s SmokefreeTxt for Teens111SmokefreeText for Teens: https://teen.smokefree.gov/become-smokefree/smokefreeteen-signup is limited to keywords such as “yes,” “no,” “quit,” or “crave.” One example of a conversational text-based intervention designed for adults is Bella 222Quit with Bella: https://www.solutions4health.co.uk/our-services/quitwithbella/

. Bella is an AI-powered chatbot for smoking cessation, developed primarily based on expert guidance, and was released in January 2018 in the UK. Bella is advertised as a “coach,” and the developers did not specify a theoretical orientation such as CBT. Data regarding efficacy for Bella has yet to be published, and it does not appear to be tailored to adolescents. We also surveyed the works that were developed using the MI/CBT framework. Researchers have been using natural language processing methods, such as recursive neural networks

[tanana2015recursive, xiao2016behavioral] or attention networks [gibson2017attention], to automatically code the transcriptions of motivational interviews [tanana2016comparison]. Tanana et al. developed ClientBot, a patient-like conversational agent, to train basic counseling skills [tanana2019development]. However, while these prior works are inspiring, none of them created a working chatbot that uses MI/CBT to promote smoking cessation. More recently, Almusharraf created an FSM-based chatbot that motivates people to quit smoking, following the counseling style of MI [almusharraf2019motivating]. This work, even though not accomplishing a full MI/CBT treatment, shed light on how such automated chatbots can be employed to help youth quit smoking.

Existing AI solutions in the smoking cessation field overpromise and underdeliver. Bella, the most advanced smoking cessation chatbot on the market, gets stuck when users input responses that are not prompted [szalacsi_2019]. For example, after the initial goal-setting session with Bella, if a user attempts to engage in general conversation with Bella, it continually responds “I can’t wait for your quit date,” which likely discourages engagement. A significant innovation would be to really deliver a human-like chatbot experience by taking advances from AI and bringing them to the smoking cessation field. One potential direction is to use transcripts from therapy sessions to develop a smoking cessation chatbot for adolescents. A data-driven approach would allow for anticipation of the types of conversations that come up for adolescents during smoking cessation interventions, which should promote engagement.