We focus on the problem of establishing the optimal upper bounds on generalized order statistics which are based on the underlying cdf belonging to the family of distributions with decreasing failure rate and decreasing failure rate on the average. This issue has been previously considered by Bieniek [Projection bounds on expectations of generalized order statistics from DFR and DFRA families, Statistics, 2006; 40: 339–351], who established upper nonnegative mean-variance bounds with use of the projections of the compositions of density functions of the uniform generalized order statistic and the exponential distribution function onto the properly chosen convex cones. In this paper we obtain possibly negative upper bounds, by improving the zero bounds obtained by Bieniek for some particular cases of gOSs. We express the bounds in the scale units generated by the central absolute moments of arbitrary orders. We also describe the attainability conditions. 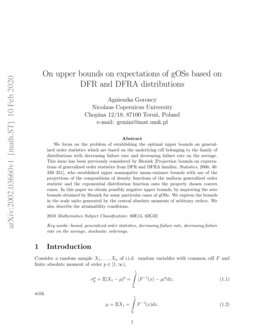 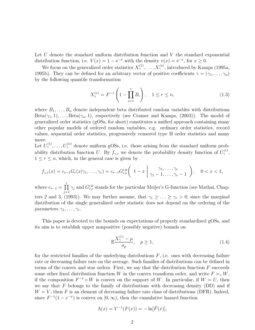 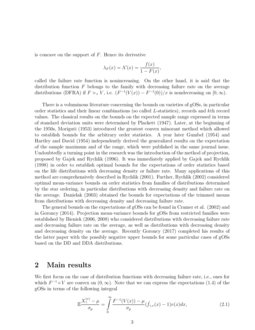 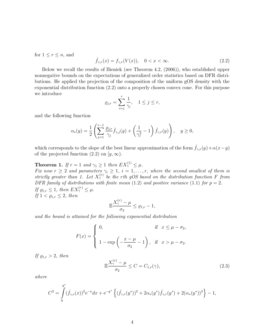 We focus on the generalized order statistics X(1)γ,…,X(n)γ

, introduced by Kamps (1995a, 1995b). They can be defined for an arbitrary vector of positive coefficients

by the following quantile transformation

we denote the probability density function of

where cr−1=r∏j=1γj and Gr,0r,r stands for the particular Meijer’s G-function (see Mathai, Chapters 2 and 3, (1993)). We may further assume, that γ1≥…≥γr>0, since the marginal distribution of the single generalized order statistic does not depend on the ordering of the parameters γ1,…,γr.

This paper is devoted to the bounds on expectations of properly standardized gOSs, and its aim is to establish upper nonpositive (possibly negative) bounds on

is concave on the support of F. Hence its derivative

There is a voluminous literature concerning the bounds on varieties of gOSs, in particular order statistics and their linear combinations (so called L-statistics), records and k

th record values. The classical results on the bounds on the expected sample range expressed in terms of standard deviation units were determined by Plackett (1947). Later, at the beginning of the 1950s, Moriguti (1953) introduced the greatest convex minorant method which allowed to establish bounds for the arbitrary order statistics. A year later Gumbel (1954) and Hartley and David (1954) independently derived the generalized results on the expectation of the sample maximum and of the range, which were published in the same journal issue. Undoubtedly a turning point in the research was the introduction of the method of projection, proposed by Gajek and Rychlik (1996). It was immediately applied by Gajek and Rychlik (1998) in order to establish optimal bounds for the expectations of order statistics based on the life distributions with decreasing density or failure rate. Many applications of this method are comprehensively described in Rychlik (2001). Further, Rychlik (2002) considered optimal mean-variance bounds on order statistics from families of distributions determined by the star ordering, in particular distributions with decreasing density and failure rate on the average. Danielak (2003) obtained the bounds for expectations of the trimmed means from distributions with decreasing density and decreasing failure rate.

The general bounds on the expectations of gOSs can be found in Cramer et al. (2002) and in Goroncy (2014). Projection mean-variance bounds for gOSs from restricted families were established by Bieniek (2006, 2008) who considered distributions with decreasing failure rate and decreasing failure rate on the average, as well as distributions with decreasing density and decreasing density on the average. Recently Goroncy (2017) completed his results of the latter paper with the possibly negative upper bounds for some particular cases of gOSs based on the DD and DDA distributions.

We first focus on the case of distribution functions with decreasing failure rate, i.e., ones for which F−1∘V are convex on (0,∞). Note that we can express the expectations (???) of the gOSs in terms of the following integral

Below we recall the results of Bieniek (see Theorem 4.2, (2006)), who established upper nonnegative bounds on the expectations of generalized order statistics based on DFR distributions. He applied the projection of the composition of the uniform gOS density with the exponential distribution function (???) onto a properly chosen convex cone. For this purpose we introduce

and the following function

which corresponds to the slope of the best linear approximation of the form ^fγ,r(y)+α(x−y) of the projected function (???) on [y,∞).

and the bound is attained for the following exponential distribution

where y∗ is the smallest positive solution to the following equation

The bound (???) is attained for the distribution function

Note that for cases r≥1 with ϱ1,r≤1, Bieniek derived zero bounds without describing the attainability conditions. In general, the positivity and negativity of the upper bounds on the expected gOSs depends on the parameters γ1,…,γr, and the restrictions imposed on the parent distribution function F. The projection method is appropriate in cases when it results with nonconstant projections (and positive upper bounds) of functions (???), which depend basically on their shapes. Otherwise this procedure returns zero bounds and another method should be employed in order to obtain possibly negative ones. Our objective is to improve Bieniek’s bounds in some particular cases.

In the first proposition we present two most general cases of optimal nonpositive bounds, which can either be zero or strictly negative.

Let EX(r)γ be the rth generalized order statistic based on parameter vector γ=(γ1…,γr)∈Rr+, and a DFR parent distribution function F with expectation μ.

Proof. Formula (???) can be rewritten as

If F(x)=V(x−θλ) is the exponential distribution function with location parameter θ and scale parameter λ>0, and r∑i=11γi=1, then

Suppose now that 0<r∑i=11γi=c<1. Then obviously r∑i=11cγi=1 and r∑i=1Viγi<r∑i=1Vicγi. Composition F−1∘V for F being DFR is possibly first constant, and then strictly increasing. Consequently,

and the inequality is strict for sufficiently large arguments. Since any positive combination of Vi has a positive probability measure of these arguments, it follows that

where the last inequality follows from Theorem 1. □

In the next proposition we present the most general results for the upper negative bounds on (???) with 1≤p<∞.

where α0 is the parameter in which the infimum of (???) is attained (possibly approached in the limit).

Proof. The proof is analogous to the proofs presented in papers of Goroncy (2017, Proposition 1) and Rychlik (2009, Theorem 2), therefore we present only the main steps of the reasoning. This particular case requires consideration of the composition of the density function of the uniform rth gOS and the exponential distribution function V, which is given by (???), and 1≤p<∞. Let us rewrite (???) as the following functional

Further, consider a convex and bounded subset Gp of Lp([0,∞),v(x)dx), which consists of nondecreasing and convex functions that integrate to zero and have the unit pth norm. Obviously, since F belongs to DFR family of distributions, functions (???) are elements of Gp. According to Bieniek (2006, Theorem 4.2) and our setting of parameters, we assume that Th(g)<0. Transforming g into ~g=−g/Th(g) we also transform set Gp into ~Gp, which is a set that consists of all the nondecreasing and convex functions ~g of Lp([0,∞),v(x)dx), which satisfy

Noticing that ||~g||p=−1/Th(g), for ~g∈~Gp and g∈Gp, which increases as Th(g) increases, we conclude that the problem of finding the supremum of Th over Gp and the problem of determining

are equivalent. Since the norm is a convex functional, we may simplify the calculations by confining ourselves only to the extreme elements of ~Gp, i.e. maximizing the norm (???) on the subset of functions of the form

We first calculate the coefficients of (???). Using the following integral calculations obtained by Bieniek (see Lemma 3.1, (2006))

and eventually results in the bound (???).

The equality in (???) is attained for the distribution functions Fα, which satisfy the following condition

The above proportion can be rewritten as

which is consistent with the equality conditions described in the proposition. □

Note that it is not easy to determine the integrals in (???) of Proposition 2 in general, especially for noninteger p. However, we managed to confirm the zero bound and specify the equality conditions for the special case of the first generalized order statistic, i.e. r=1 and arbitrarily chosen 1<p<∞. This is possible due to the fact that the density of gOS in this case can be easily determined and that simplifies calculations. These results are presented in the proposition below, while the special case r=1 with p=1 is considered further in a separate corollary.

Suppose γ>1. Rychlik (see proof of Theorem 1, (2009)), who obtained analogous results for the common order statistics, has shown that distribution functions Fα, 0<α<1, which are obviously DFR, have mean equal to (???) and pth absolute central moment equal to (???). Moreover, the quantile function of such distributions is given by

It is sufficient to check that

which tends to 0 if α⟶0, and completes the proof. □

The case of bounds given in scale units generated by the mean absolute deviation σ1, is treated separately in the corollary below, which follows from Proposition 2. Note that in this case

Fix r≥1 and γi>1, i=1,…,r, are such that ϱ1,r=r∑i=11γi<1. Let X(r)γ be the rth gOS based on the distribution function F from DFR family of distributions with finite absolute mean deviation σ1 defined in (???) for p=1. We have the following bound

In particular, bounds for the first generalized order statistics, given in the absolute mean deviation units are strictly negative, presented in the corollary below.

Let X(1)γ be the first generalized order statistic with parameter γ=γ1>1, based on the distribution function F from DFR family of distributions with finite mean absolute deviation σ1. We have the following upper bound

The equality conditions in (???) correspond to those described in Corollary 1, with α0=−lnβ0, where β0 is the point in which the infimum of the rhs of (???) is attained.

Note that here we have

The numerical values of bounds for the first gOSs expressed in σ1 units for some particular cases of the parameter γ1 are presented in Table 1. Parameter β0 stands for the argument of the rhs of (???), for which the infimum is attained.

The numerical simulations show that for increasing values of 1<γ1<2, the value of β0 decreases from 1 to 0 while the bound gradually decreases to −1/2. It eventually stabilizes its value in −1/2 beginning with γ1=2, when the infimum of the rhs of (???) is attained in β0=0. This coincides with results of Goroncy (2014, Theorem 4) in the general case of the arbitrary underlying distribution function for p=1.

Let us now consider gOSs which are based on DFRA distribution functions. The case of upper nonnegative bounds on (???) for p=2 was solved by Bieniek (2006, Theorem 4.3). However, for some particular cases of gOSs, the projection method, which was used there, resulted in zero bounds. Recently, Goroncy (2017) presented bounds on expectations of the standardized gOS arising from decreasing density on the average distributions. This method of obtaining possibly negative bounds will be applied here in order to obtain respective results for decreasing failure rate on the average distributions.

The results presented below are just the immediate application of the Proposition 3 of Goroncy (2017) in case when a particular condition presented in Bieniek (2006, Theorem 4.3) is satisfied.

Let X(r)γ, r≥2, be the rth gOS based on the distribution function F which belongs to DFRA family of distributions and fix 1≤p<∞. Let ^β be the only zero of the equation ^fγ,r(β)=1 in the interval (0,^θ), for ^θ being the smallest inflection point of (???). If the following condition is satisfied

then the following bound holds

Numerical calculations show, that in some cases (e.g. for particular settings of progressively type II censored order statistics), the infimum of B∗p is approached in limit for α→∞ and equals to zero. This is not surprising, but it is not easy to show analytically that in general the zero infimum of B∗p is attained in the limit, at the right exponential support interval.

The research was supported by the Polish National Science Center Grantno. 2011/01/D/ST1/04172. The author is very grateful to anonymous referees, whose helpful comments and remarks helped to significantly improve the manuscript, especially to the one who suggested addition of Proposition 1.