On uniform continuity of posterior distributions

In the setting of dominated statistical models, we provide conditions yielding strong continuity of the posterior distribution with respect to the observed data. We show some applications, with special focus on exponential models. 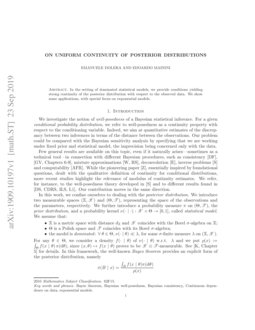 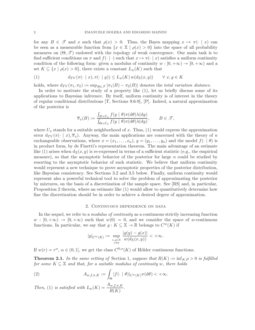 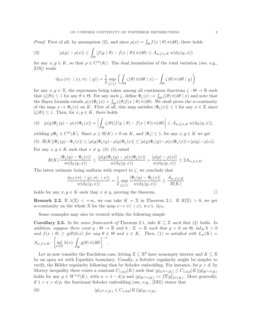 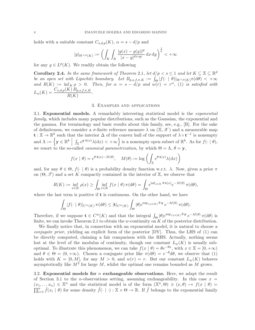 Score and Information for Recursive Exponential Models with Incomplete Data

In this paper, we investigate the problem of synthesizing computable fun...
Léo Exibard, et al. ∙

We investigate the notion of well-posedness

of a Bayesian statistical inference. For a given

, we refer to well-posedness as a continuity property with respect to the conditioning variable. Indeed, we aim at quantitative estimates of the discrepancy between two inferences in terms of the distance between the observations. Our problem could be compared with the Bayesian sensitivity analysis by specifying that we are working under fixed prior and statistical model, the imprecision being concerned only with the data.

Few general results are available on this topic, even if it naturally arises—sometimes as a technical tool—in connection with different Bayesian procedures, such as consistency [DF], [GV, Chapters 6-9], mixture approximations [W, RS], deconvolution [E], inverse problems [S] and computability [AFR]. While the pioneering paper [Z], essentially inspired by foundational questions, dealt with the qualitative definition of continuity for conditional distributions, more recent studies highlight the relevance of modulus of continuity estimates. We refer, for instance, to the well-posedness theory developed in [S] and to different results found in [DS, CDRS, ILS, L1]. Our contribution moves in the same direction.

In this work, we confine ourselves to dealing with the posterior distribution. We introduce two measurable spaces (X,X) and (Θ,T), representing the space of the observations and the parameters, respectively. We further introduce a probability measure π on (Θ,T), the prior distribution, and a probability kernel ν(⋅ | ⋅):X×Θ→[0,1], called statistical model. We assume that:

In order to motivate the study of a property like (1

), let us briefly discuss some of its applications to Bayesian inference. By itself, uniform continuity is of interest in the theory of regular conditional distributions

where Ux stands for a suitable neighborhood of x. Thus, (1) would express the approximation error dTV(π(⋅ | x),¯¯¯πx). Anyway, the main applications are concerned with the theory of n exchangeable observations, where x=(x1,…,xn), y=(y1,…,yn) and the model f(⋅ | θ) is in product form, by de Finetti’s representation theorem. The main advantage of an estimate like (1) arises when dX(x,y) is re-expressed in terms of a sufficient statistic (e.g., the empirical measure), so that the asymptotic behavior of the posterior for large n could be studied by resorting to the asymptotic behavior of such statistic. We believe that uniform continuity would represent a new technique to prove asymptotic properties of the posterior distribution, like Bayesian consistency. See Sections 3.2 and 3.5 below. Finally, uniform continuity would represent also a powerful technical tool to solve the problem of approximating the posterior by mixtures, on the basis of a discretization of the sample space. See [RS] and, in particular, Proposition 2 therein, where an estimate like (1) would allow to quantitatively determine how fine the discretization should be in order to achieve a desired degree of approximation.

In the sequel, we refer to a modulus of continuity as a continuous strictly increasing function w:[0,+∞)→[0,+∞) such that w(0)=0, and we consider the space of w-continuous functions. In particular, we say that g:K⊆X→R belongs to Cw(K) if

In the same setting of Section 1, suppose that R(K):=infKρ>0 is fulfilled for some K⊆X and that, for a suitable modulus of continuity w, there holds

The latter estimate being uniform with respect to ζ, we conclude that

holds for any x,y∈K such thay x≠y, proving the theorem. ∎

Some examples may also be treated within the following simple

Let us now consider the Euclidean case, letting X⊆Rd have nonempty interior and K⊆X be an open set with Lipschitz boundary. Usually, a Sobolev regularity might be simpler to verify, the Hölder regularity following then by Sobolev embedding. For instance, for p>d, by Morrey inequality there exists a constant C1,d,p(K) such that |g|C0,α(K)≤C1,d,p(K)|g|W1,p(K) holds for any g∈W1,p(K), with α=1−d/p and |g|W1,p(K):=∥∇g∥Lp(K). More generally, if 1>s>d/p, the fractional Sobolev embedding (see, e.g., [DD]) states that

for any g∈Lp(K). We readily obtain the following

A remarkably interesting statistical model is the exponential family, which includes many popular distributions, such as the Gaussian, the exponential and the gamma. For terminology and basic results about this family, see, e.g., [B]. For the sake of definiteness, we consider a σ-finite reference measure λ on (X,X) and a measurable map t:X→Rk such that the interior Δ of the convex hull of the support of λ∘t−1 is nonempty and Λ:={y∈Rk ∣∣ ∫Xey⋅t(x)λ(dx)<+∞} is a nonempty open subset of Rk. As for f(⋅ | θ), we resort to the so-called canonical parametrization, by which Θ=Λ, θ=y,

is a probability density function w.r.t.

λ. Now, given a prior π on (Θ,T) and a set K compactly contained in the interior of X, we observe that

where the last term is positive if t is continuous. On the other hand, we have

Therefore, if we suppose t∈Cw(K) and that the integral ∫Θ|θ|esupz∈t(K)θ⋅ye−M(θ)π(dθ) is finite, we can invoke Theorem 2.1 to obtain the w-continuity on K of the posterior distribution.

We finally notice that, in connection with an exponential model, it is natural to choose a conjugate prior, yielding an explicit form of the posterior [DY]. Thus, the LHS of (1) can be directly computed, claiming a fair comparison with the RHS. Actually, nothing seems lost at the level of the modulus of continuity, though our constant Lw(K) is usually sub-optimal. To illustrate this phenomenon, we can take f(x | θ)=θe−θx, with x∈X=[0,+∞) and θ∈Θ=(0,+∞)

for suitable functions Xn:Xn→Xk, τn:Θ→Rk, ¯tn:Xk→Rk, ¯Mn:Rk→R, with Xn symmetric and k standing for the dimension of Θ. We can recast the statistical model by considering τn as the new parameter, and Xn as the observable. Indeed, we introduce

3.3. Global regularity for models with X⊂Rd.

When λ(X)<+∞, we can check whether Theorem 2.1 holds with K=X, yielding a global uniform continuity. We discuss the case X⊂Rd with λ=Ld, the d-dimensional Lebesgue measure, forcing X to be bounded. Many popular models do not satisfy the assumptions of Theorem 2.1 with K=X, but only with some K compactly contained in the interior of X. This is the case of Beta and Dirichlet models. On the other hand, a model that fits the assumptions of Corollary 2.3 is the Bradford distribution, given by

One of the merits of our approach consists in the fact that we can handle also complex statistical models of non parametric type. Two noteworthy examples in Bayesian analysis are the infinite dimensional exponential family and the infinite mixture models. See [GN] for a comprehensive treatment.

where FrT stands for the density of rT with respect to the Lebesuge measure. To check (2), we consider a Hölder condition with exponent γ∈(0,1). Thus, we note that

By the fractional Sobolev inequality (6), for s=γp+1p we have

where hx,y is the two-times density of θ. Typically, the Kolmogorov-Chentsov condition [K, Chapter 3]

yielding Zq(rT)<+∞ for all q∈R. Therefore, we obtain Hölder continuity of the posterior distribution for any exponent γ<12.

The second model of interest, namely the so-called infinite dimensional mixture model, is based on a family of densities of the form f(x | θ)=∫Rκ(x;t)θ(dt), with X=R and Θ equal to the space of all probability measures P(R) on (R,B(R)). The kernel κ consists of a family of densities (in the x-variable) parametrized by t∈R. A noteworthy case of interest is the Gaussian kernel κ(x;t)=1√2πexp{−12(x−t)2}. Now, after fixing a prior π of nonparametric type (e.g. the Ferguson-Dirichlet prior), the application of Theorem 2.1 is straightforward. First, for kernels in the form κ(x;t)=κ(x−t), condition (2) holds even independently of π, provided that supx∈R|κ′(x)|<+∞. For the condition on R(K), for some compact K⊂R, it is enough to assume that infx∈K∫Rκ(x;t)¯¯¯θ(dt)>0, where ¯¯¯θ(B):=∫P(R)θ(B)π(dθ), B∈B(R).

We have seen in Section 3.2 that, in presence of exchangeable observations, the posterior can be written as

of i.i.d. random variables. The objective is to prove that the posterior piles up near the true value

θ0, i.e. in probability, for some weak distance d (e.g., Prokhorov or bounded-Lipschitz metric [GS]) between probability measures on (Θ,T), possibly with an estimation of the convergence rate. To establish a link with our theory, we introduce the probability kernel

As for the first term on the RHS, convergence to zero is well-known with explicit rates, as a consequence of the so-called Kullback-Leibler property [GV, Definition 6.15]. The second term on the RHS can be studied under expectation, by splitting it as follows:

ED received funding from the European Research Council (ERC) under the European Union’s Horizon 2020 research and innovation programme under grant agreement No 817257. This research was also supported by the Italian Ministry of Education, University and Research (MIUR) under “PRIN project” grant No 2017TEXA3H, and “Dipartimenti di Eccellenza Program” (2018–2022) - Dept. of Mathematics “F. Casorati”, University of Pavia.