On Unbalanced Optimal Transport: An Analysis of Sinkhorn Algorithm 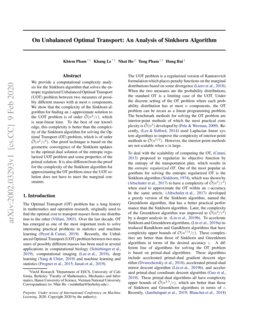 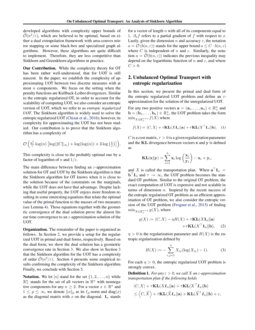 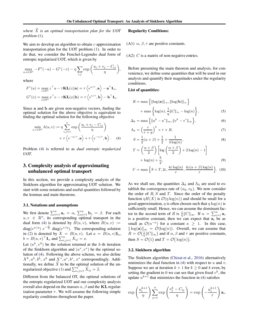 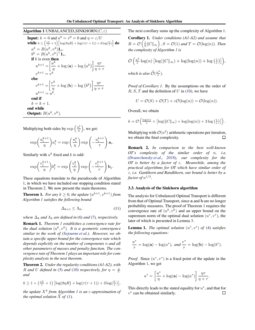 The Optimal Transport (OT) problem has a long history in mathematics and operation research, originally used to find the optimal cost to transport masses from one distribution to the other (Villani, 2003)

. Over the last decade, OT has emerged as one of the most important tools to solve interesting practical problems in statistics and machine learning

The UOT problem is a regularized version of Kantorovich formulation which places penalty functions on the marginal distributions based on some divergence (Liero et al., 2018)

components, the OT problem can be recast as a linear programming problem. The benchmark methods for solving the OT problem are interior-point methods of which the most practical complexity is

Our Contribution. While the complexity theory for OT has been rather well-understood, that for UOT is still nascent. In the paper, we establish the complexity of approximating UOT between two discrete measures with at most n components. We focus on the setting when the penalty functions are Kullback-Leiber divergences. Similar to the entropic regularized OT, in order to account for the scalability of computing UOT, we also consider an entropic version of UOT, which we refer to as entropic regularized UOT. The Sinkhorn algorithm is widely used to solve the entropic regularized UOT (Chizat et al., 2016); however, its complexity for approximating the UOT has not been studied. Our contribution is to prove that the Sinkhorn algorithm has a complexity of

This complexity is close to the probably optimal one by a factor of logarithm of n and 1/ε.

The main difference between finding an ε-approximation solution for OT and UOT by the Sinkhorn algorithm is that the Sinkhorn algorithm for OT knows when it is close to the solution because of the constraints on the marginals, while the UOT does not have that advantage. Despite lacking that useful property, the UOT enjoys more freedom resulting in some interesting equations that relate the optimal value of the primal function to the masses of two measures (see Lemma 4). Those equations together with the geometric convergence of the dual solution prove the almost linear time convergence to an ε-approximation solution of the UOT.

Organization. The remainder of the paper is organized as follows. In Section 2, we provide a setup for the regularized UOT in primal and dual forms, respectively. Based on the dual form, we show the dual solution has a geometric convergence rate in Section 3. We also show in Section 3 that the Sinkhorn algorithm for the UOT has a complexity of order ~O(n2/ε). Section 4 presents some empirical results confirming the complexity of the Sinkhorn algorithm. Finally, we conclude with Section 5.

stands for the set of all vectors in

Rn with nonnegative components for any n≥2. For a vector x∈Rn and 1≤p≤∞, we denote ∥x∥p as its ℓp-norm and diag(x) as the diagonal matrix with x on the diagonal. 1n stands for a vector of length n with all of its components equal to 1. ∂xf refers to a partial gradient of f with respect to x. Lastly, given the dimension n and accuracy ε, the notation a=O(b(n,ε)) stands for the upper bound a≤C⋅b(n,ε) where C is independent of n and ε. Similarly, the notation a=˜O(b(n,ε)) indicates the previous inequality may depend on the logarithmic function of n and ε, and where C>0.

In this section, we present the primal and dual form of the entropic regularized UOT problem and define an ε-approximation for the solution of the unregularized UOT.

C is a cost matrix, τ>0 is a given regularization parameter and the KL divergence between vectors x and y is defined as

and X is called the transportation plan. When a⊤1n=b⊤1n and τ→∞, the UOT problem becomes the standard OT problem. Similar to the original OT problem, the exact computation of UOT is expensive and not scalable in terms of dimension n. Inspired by the recent success of the entropic regularized OT problem as an efficient approximation of OT problem, we also consider the entropic version of the UOT problem (Frogner et al., 2015) of finding minX∈Rn×n+g(X), where

For each η>0, the entropic regularized UOT problem is strongly convex.

For any ε>0, we call X an ε-approximation transportation plan if the following holds

where ˆX is an optimal transportation plan for the UOT problem (1).

We aim to develop an algorithm to obtain ε-approximation transportation plan for the UOT problem (1). In order to do that, we consider the Fenchel-Legendre dual form of entropic regularized UOT, which is given by

Problem (4) is referred to as dual entropic regularized UOT.

In this section, we provide a complexity analysis of the Sinkhorn algorithm for approximating UOT solution. We start with some notations and useful quantities followed by the lemmas and main theorems.

Different from the balanced OT, the optimal solutions of the entropic regularized UOT and our complexity analysis overall also depend on the masses α,β and the KL regularization parameter τ. We will assume the following simple regularity conditions throughout the paper.

Before presenting the main theorem and analysis, for convenience, we define some quantities that will be used in our analysis and quantify their magnitudes under the regularity conditions.

As we shall see, the quantities Δk and Λk are used to establish the convergence rate of (uk,vk). We now consider the order of R,S and T. Since the order of the penalty function ηH(X) is O(ηlog(n)) and should be small for a good approximation, η is often chosen such that ηlog(n) is sufficiently small. Hence, we can assume the dominant factor in the second term of R is 1η∥C∥∞. If α=∑ni=1ai is a positive constant, then we can expect that ai be as small as O(n−κ) for a constant κ≥1. In this case, ∥log(a)∥∞=O(log(n)). Overall, we can assume that R=O(1η∥C∥∞) and if α,β and τ are positive constants, then S=O(1) and T=O(log(n)).

The Sinkhorn algorithm (Chizat et al., 2016) alternatively minimizes the dual function in (4) with respect to u and v. Suppose we are at iteration k+1 for k≥0 and k even, by setting the gradient to 0 we can see that given fixed vk, the update uk+1 that minimizes the function in (4) satisfies

Multiplying both sides by exp(ukiη), we get:

Similarly with uk fixed and k

These equations translate to the pseudocode of Algorithm  1, in which we have included our stopping condition stated in Theorem 2.

We now present the main theorems.

For any k≥0, the update (uk+1,vk+1) from Algorithm 1 satisfies the following bound

Theorem 1 establishes a convergence rate for the dual solution (uk,vk). It is a geometric convergence similar to the work of (Sejourne et al., ). However, we obtain a specific upper bound for the convergence rate which depends explicitly on the number of components n and all other parameters of masses and penalty function. The convergence rate of Theorem 1 plays an important role for complexity analysis in the next theorem.

the update Xk from Algorithm 1 is an ε-approximation of the optimal solution ˆX of (1).

The next corollary sums up the complexity of Algorithm 1.

By the assumptions on the order of R,S, T and the definition of U in (10), we have

Multiplying with O(n2) arithmetic operations per iteration, we obtain the final complexity. ∎

3.3 Analysis of the Sinkhorn algorithm

The analysis for Unbalanced Optimal Transport is different from that of Optimal Transport, since a and b are no longer probability measures. The proof of Theorem 1 requires the convergence rate of (uk,vk) and an upper bound on the supremum norm of the optimal dual solution (u∗,v∗), the later of which is presented in Lemma 3.

The optimal solution (u∗,v∗) of (4) satisfies the following equations:

Since (u∗,v∗) is a fixed point of the update in the Algorithm 1, we get

This directly leads to the stated equality for u∗, and that for v∗ can be obtained similarly. ∎

Assume the regularity conditions (A1-A2) hold, the following are true

The proof is given in the appendix.

The sup norm of the optimal solution ∥u∗∥∞ and ∥v∗∥∞ is bounded by:

We start with the equations for the solution u∗ in Lemma 1, i.e.

The second term can be bounded as follows

WLOG assume that ∥u∗∥∞≥∥v∗∥∞, we can easily obtain the stated bound. ∎

We first consider the case when k is even. From the update of uk+1 in Algorithm 1, we have:

Using Lemma 1, the above equality is equivalent to

Using Lemma 2, we get

This leads to ∥uk+1−u∗∥∞≤ττ+η∥vk−v∗∥∞. Similarly, we obtain ∥vk−v∗∥∞≤ττ+η∥uk−1−u∗∥∞. Combining the two inequalities yields

Repeating all the above arguments alternatively, we have

Note that vk+1=vk for k even, then

These two results lead to Δk+1≤(ττ+η)k∥v∗∥∞.

Thus the above inequality is true for all k. Using the fact that ∥v∗∥∞≤max{∥u∗∥∞,∥v∗∥∞} and Lemma 3, we obtain the conclusion. ∎

3.4 Proof of the main theorem

Assume that the function g(X) attains its minimum at X∗, then

Similarly, assume that f(X) attains its minimum at ˆX, then

Both equations in Lemma 4 establish the relationships between the optimal solutions of (1) and (2) with other parameters. Those relationships are very useful for analysing the behaviour of the optimal solution of UOT, because the UOT does not have any conditions on the marginals as the OT does. Consequences of Lemma 4 include Corollary 2 which provides upper bounds for ˆx and x∗ of (1) and (2) as well as bounds for the entropic functions in the proof of Theorem 2. The key idea of the proof surprisingly comes from the fact that the UOT solution does not have to meet the marginal constraints. We now present the proof of Lemma 4 and defer the proof of Corollary 2 to the Appendix.

For the entropic penalty term,

Putting all results together, we obtain

Taking the derivative of g(tX∗) with respect to t,

The function g(tX∗) is well-defined for all t∈R+. We know that g(tX∗) attains its minimum at t=1. Replace t=1 into the above equation, we obtain

The second claim is proved in the same way. ∎

Assume that condition (A1-A2) hold and ηlog(n) is sufficiently small. We have the following bounds on x∗ and ˆx:

Next, we use the condition for k in Theorem 2 to bound some relevant quantities at the k-th iteration of the Sinkhorn algorithm.

Assume that the regularity conditions (A1-A2) hold and k satisfies the inequality in Theorem 2. The following are true

We are now ready to construct a proof for Theorem 2.

From the definitions of f and g, we have

since g(X∗)−g(ˆX)≤0, as X∗ is the optimal solution of (2). The above two terms can be bounded separately as follows:

We first show the following inequalities

for any X that Xij≥0 and x=∑ijXij.

By combining the two results, we have

WLOG we assume that k is odd. At step k−1 of Algorithm 1, we find uk by minimizing the dual function (4) given a and fixed vk−1, and simply keep vk=vk−1. Hence, Xk=B(uk,vk) is the optimal solution of

Note that bkj=exp(vkjτ)bkj and bj=exp(v∗jτ)b∗j. Use part (b) of Lemma 2

Note that bkj≥0 for all j. The above inequality leads to