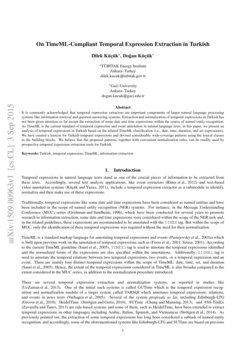 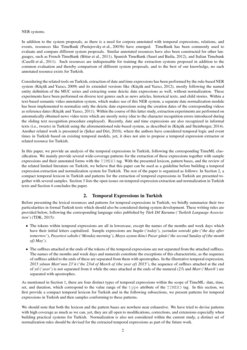 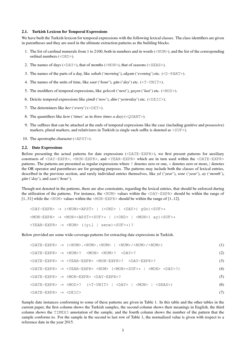 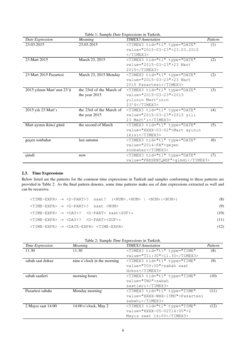 Temporal expressions in natural language texts stand as one of the crucial pieces of information to be extracted from these texts. Accordingly, several text analysis applications, like event extractors [Ritter et al.2012] and text-based video annotation systems [Küçük and Yazıcı2011], include a temporal expression extractor as a submodule to identify, normalize and then make use of these expressions.

There are several temporal expression extraction and normalization systems, as reported in studies like [UzZaman et al.2013]. One of the initial such systems is called GUTime which is the temporal expression recognition and normalization module of a larger system called TARSQI which annotates temporal expressions, relations, and events in news texts [Verhagen et al.2005]. Several of the system proposals so far, including Edinburgh-LTG [Grover et al.2010], HeidelTime [Strötgen and Gertz2010], SUTime [Chang and Manning2013], and FSS-TimEx [Zavarella and Tanev2013]

are rule-based systems and some of them, such as HeidelTime, have been extended to extract temporal expressions in other languages including Arabic, Italian, Spanish, and Vietnamese

[Strötgen et al.2014]. As previously pointed out, the extraction of some temporal expressions has long been considered a subtask of named entity recognition, and accordingly, some of the aforementioned systems like Edinburgh-LTG and SUTime are based on previous NER systems.

In addition to the system proposals, as there is a need for corpora annotated with temporal expressions, relations, and events, resources like TimeBank [Pustejovsky et al.2003b] have emerged. TimeBank has been commonly used to evaluate and compare different system proposals. Similar annotated resources have also been constructed for other languages, such as French TimeBank [Bittar et al.2011], Spanish TimeBank [Saurí and Badia2012], and Italian Timebank [Caselli et al.2011]. Such resources are indispensable for training the extraction systems proposed in addition to the common evaluation and thereby comparison of different system proposals, and to the best of our knowledge, no such annotated resource exists for Turkish.

Considering the related tools on Turkish, extraction of date and time expressions has been performed by the rule-based NER system [Küçük and Yazıcı2009] and its extended versions like [Küçük and Yazıcı2012], mostly following the named entity definition of the MUC series and extracting some deictic date expressions as well, without normalization. These experiments have been performed on diverse text genres such as news articles, historical texts, and child stories. Within a text-based semantic video annotation system, which makes use of this NER system, a separate date normalization module has been implemented to normalize only the deictic date expressions using the creation dates of the corresponding videos as reference dates [Küçük and Yazıcı2011]. Within the course of this latter study, extraction experiments are performed on automatically obtained news video texts which are mostly noisy (due to the character recognition errors introduced during the sliding text recognition procedure employed). Recently, date and time expressions are also recognized in informal texts (i.e., tweets) in Turkish using the aforementioned rule-based system, as described in [Küçük and Steinberger2014]. Another related work is presented in [Şeker and Diri2010], where the authors have considered temporal logic and event times in Turkish based on existing temporal models, yet, it does not aim to propose a temporal expression extractor or related resource for Turkish.

Before presenting the lexical resources and patterns for temporal expressions in Turkish, we briefly summarize their two particularities in formal Turkish texts which should also be considered during system development. These writing rules are provided below, following the corresponding language rules published by Türk Dil Kurumu (‘Turkish Language Association’) [TDK2015]:

As mentioned in Section 1, there are four distinct types of temporal expressions within the scope of TimeML: date, time, set, and duration, which correspond to the value range of the type attribute of the TIMEX3 tag. In this section, we first provide a compact temporal lexicon for Turkish and in the following subsections, we present patterns for temporal expressions in Turkish and then samples conforming to these patterns.

We should note that both the lexicon and the pattern bases are nowhere near exhaustive. We have tried to devise patterns with high coverage as much as we can, yet, they are all open to modifications, corrections, and extensions especially when building practical systems for Turkish. Normalization is also not considered within the current study, a distinct set of normalization rules should be devised for the extracted temporal expressions as part of the future work.

We have built the Turkish lexicon for temporal expressions with the following lexical classes. The class identifiers are given in parentheses and they are used in the ultimate extraction patterns as the building blocks.

Before presenting the actual patterns for date expressions (<DATE-EXPR>), we first present patterns for auxiliary constructs of <DAY-EXPR>, <MON-EXPR>, and <YEAR-EXPR> which are in turn used within the <DATE-EXPR> patterns. The patterns are presented as regular expressions where ? denotes zero or one, * denotes zero or more, | denotes the OR operator and parentheses are for grouping purposes. The patterns may include both the classes of lexical entries, described in the previous section, and rarely individual entries themselves, like yıl (‘year’), sene (‘year’), ay (‘month’), gün (‘day’), and saat (‘hour’).

Below provided are some wide-coverage patterns for extracting date expressions in Turkish.

Below listed are the patterns for the common time expressions in Turkish and samples conforming to these patterns are provided in Table 2. As the final pattern denotes, some time patterns make use of date expressions extracted as well and can be recursive.

The two patterns for the extraction of duration expressions in Turkish are given below and three related samples are provided in Table 4.

The open issues on temporal expression extraction from Turkish texts include the following: