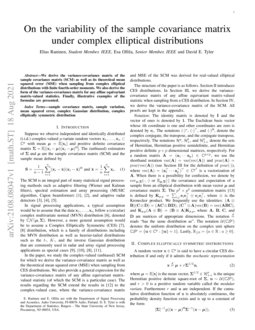 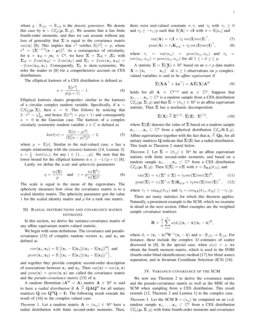 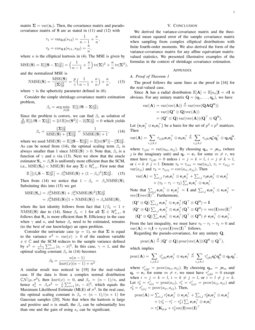 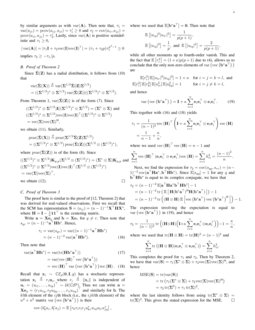 We consider covariance matrix estimation in a setting, where there are m...
Elias Raninen, et al. ∙

On characterizations of the covariance matrix

Curvature effects on the empirical mean in Riemannian and affine Manifolds: a non-asymptotic high concentration expansion in the small-sample regime

. The (unbiased) estimators of

The SCM is an integral part of many statistical signal processing methods such as adaptive filtering (Wiener and Kalman filters), spectral estimation and array processing (MUSIC algorithm, Capon beamformer)

: The identity matrix is denoted by

I and the vector of ones is denoted by 1. The Euclidean basis vector whose ith coordinate is one and other coordinates are zero is denoted by ei. The notations (⋅)∗, (⋅)⊤, and (⋅)H, denote the complex conjugate, the transpose, and the conjugate transpose, respectively. The notations Hp, Hp+, and Hp++ denote the sets of Hermitian, Hermitian positive semidefinite, and Hermitian positive definite p×p

A=(a1⋯ap)∈Cp×p, we use the shorthand notation var(A)=var(vec(A)) and pvar(A)=pvar(vec(A)) (see Section III for the definition of pvar(⋅)), where vec(A)=(a⊤1⋯a⊤p)⊤∈Cp2 is a vectorization of A. When there is a possibility for confusion, we denote by covμ,Σ(⋅,⋅) or Eμ,Σ[⋅] the covariance and expectation of a sample from an elliptical distribution with mean vector μ and covariance matrix Σ. The p2×p2 commutation matrix [13] is defined by Kp,p=∑i,jeie⊤j⊗eje⊤i, where ⊗ is the Kronecker product. We frequently use the identities: (A⊗B)(C⊗D)=(AC⊗BD), (C⊤⊗A)vec(B)=vec(ABC), and Kp,p(A⊗B)=(B⊗A)Kp,p, where A, B, C, and D are matrices of appropriate dimensions. The notation d= reads “has the same distribution as”. The notation U(CSp)

denotes the uniform distribution on the complex unit sphere

where μ=E[x] is the mean vector, Σ1/2∈Hp++ is the unique Hermitian positive definite square-root of Σ, u∼U(CSp), and r>0

is a positive random variable called the

modular variate. Furthermore r and u

are independent. If the cumulative distribution function of

is absolutely continuous, the probability density function exists and is up to a constant of the form

where g:R≥0→R>0 is the density generator. We denote this case by x∼CEp(μ,Σ,g). We assume that x has finite fourth-order moments, and thus we can assume without any loss of generality that Σ is equal to the covariance matrix var(x) [8]. This implies that r2 verifies E[r2]=p, where r2=∥Σ−1/2(x−μ)∥2. As a consequence of circularity, for x=xR+ȷxI∈Cp, we have Σ=ΣR+ȷΣI with ΣR=2var(xR)=2var(xI) and ΣI=2cov(xI,xR)=−2cov(xR,xI). Consequently, ΣI

is skew-symmetric. We refer the reader to

The elliptical kurtosis of a CES distribution is defined as

Lastly, we define the scale and sphericity parameters

The scale is equal to the mean of the eigenvalues. The sphericity measures how close the covariance matrix is to a scaled identity matrix. The sphericity parameter gets the value

1 for the scaled identity matrix and p for a rank one matrix.

In this section, we derive the variance-covariance matrix of any affine equivariant matrix-valued statistic.

We begin with some definitions. The covariance and pseudo-covariance [15] of complex random vectors x1 and x2 are defined as

and together they provide complete second-order description of associations between x1 and x2. Then var(x)=cov(x,x) and pvar(x)=pcov(x,x) are called the covariance matrix and the pseudo-covariance matrix [15] of x.

A random Hermitian (AH=A) matrix A∈Hp is said to have a radial distribution if Ad=QAQH for all unitary matrices Q (so QHQ=I). The following result extends the result of [16] to the complex-valued case.

Let a random matrix A=(aij)∈Hp have a radial distribution with finite second-order moments. Then, there exist real-valued constants σ,τ1 and τ2 with τ1≥0 and τ2≥−τ1/p such that E[A]=σI with σ=E[aii] and

holds for all A∈Cp×p and a∈Cp. Suppose that x1,…,xn⊂Cp is a random sample from a CES distribution CEp(μ,Σ,g) and that ^Σ=(^σij)∈Hp is an affine equivariant statistic. Then ^Σ has a stochastic decomposition

where ^Σ(Z) denotes the value of ^Σ based on a random sample z1,…,zn⊂Cp from a spherical distribution CEp(0,I,g). Affine equivariance together with the fact that zid=Qzi for all unitary matrices Q indicate that ^Σ(Z) has a radial distribution. This leads to Theorem 2 stated below.

Let ^Σ=(^σij)∈Hp be an affine equivariant statistic with finite second-order moments, and based on a random sample x1,…,xn⊂Cp from a CES distribution CEp(μ,Σ,g). Then E[^Σ]=σΣ with σ=E0,I[^σ11], and

There are many statistics for which this theorem applies. Naturally, a prominent example is the SCM, which we examine in detail in the next section. Other examples are the weighted sample covariance matrices

where di=(xi−¯x)HS−1(xi−¯x) and u:R≥0→R≥0. For instance, these include the complex M-estimates of scatter discussed in [8]. In the special case, when u(s)=s, we obtain the fourth moment matrix, which is used in the FOBI (fourth-order blind identification) method [17] for blind source separation, and in Invariant Coordinate Selection (ICS) [18].

Iv Variance-covariance of the SCM

where κ is the elliptical kurtosis in (4). The MSE is given by

and the normalized MSE is

where γ is the sphericity parameter defined in (6).

Since the problem is convex, we can find βo as solution of ∂∂βE[∥βS−Σ∥2F]=2βE[tr(S2)]−2∥Σ∥2F=0 which yields

where the last identity follows from fact that 1/βo=1+NMSE(S) due to (14). Since βo<1 for all Σ∈Hp++, it follows that So is more efficient than S. Efficiency in the case when γ and κ, and hence βo need to be estimated, remains (to the best of our knowledge) an open problem.

Consider the univariate case (p=1), so that Σ is equal to the variance σ2=var(x)>0 of the random variable x∈C and the SCM reduces to the sample variance defined by s2=1n−1∑ni=1|xi−¯x|2. In this case, γ=1, and the optimal scaling constant βo in (14) becomes

A similar result was noticed in [19]

for the real-valued case. If the data is from a complex normal distribution

CN(μ,σ2), then kurt(x)=0, and βo=(n−1)/n, and hence s2o=βos2=1n∑ni=1|xi−¯x|2, which equals the Maximum Likelihood Estimate (MLE) of σ2. In the real case, the optimal scaling constant is βo=(n−1)/(n+1) for Gaussian samples [20]. Note that when the kurtosis is large and positive and n is small, the βo can be substantially less than one and the gain of using so can be significant.

-a Proof of Theorem 1

The proof follows the same lines as the proof in [16] for the real-valued case.

Since A has a radial distribution

is obvious. For any unitary matrix

Let {eie⊤j⊗eke⊤l} be a basis for the set of p2×p2 matrices. Then

Regarding the pseudo-covariance, for any unitary Q,

-B Proof of Theorem 2

Since ^Σ(Z) has a radial distribution, it follows from (10) that

The proof here is similar to the proof of [12, Theorem 2] that was derived for real-valued observations. First we recall that the SCM has representation S=(sij)=(n−1)−1X⊤HX∗, where H=I−1n11⊤ is the centering matrix.

where we used that E[b∗a⊤]=0. Then note that

while all other moments up to fourth-order vanish. This and the fact that E[r4i]=(1+κ)p(p+1) due to (4), allows us to conclude that the only non-zero elements of var(vec(b∗a⊤)) are