On the unisolvence for the quasi-polynomial spaces of differential forms 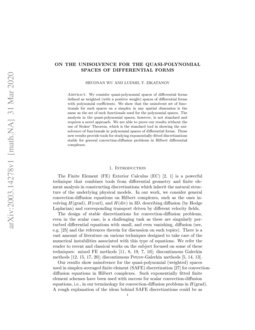 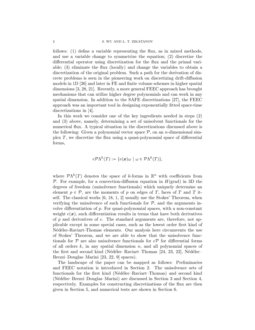 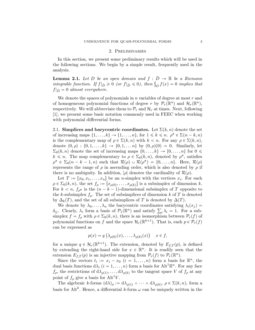 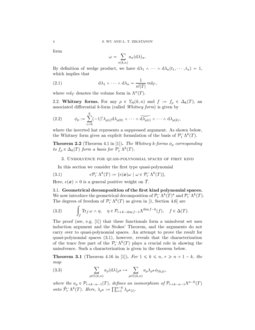 The Bubble Transform and the de Rham Complex

The purpose of this paper is to discuss a generalization of the bubble t...
Richard S. Falk, et al. ∙

A geometry of information, I: Nerves, posets and differential forms

Jacobi's results on the computation of the order and of the normal forms...
François Ollivier, et al. ∙

The impossibility theorem of Dekel, Lipman and Rustichini has been thoug...
Peter Fritz, et al. ∙

The Finite Element (FE) Exterior Calculus (EC) [2, 1] is a powerful technique that combines tools from differential geometry and finite element analysis in constructing discretizations which inherit the natural structure of the underlying physical models. In our work, we consider general convection-diffusion equations on Hilbert complexes, such as the ones involving H(grad), H(curl), and H(div) in 3D, describing diffusion (by Hodge Laplacian) and corresponding transport driven by different velocity fields.

The design of stable discretizations for convection-diffusion problems, even in the scalar case, is a challenging task as these are singularly perturbed differential equations with small, and even vanishing, diffusion (see, e.g. [25] and the references therein for discussion on such topics). There is a vast amount of literature on various techniques designed to take care of the numerical instabilities associated with this type of equations. We refer the reader to recent and classical works on the subject focused on some of these techniques: mixed FE methods [11, 8, 19, 7, 10]; discontinuous Galerkin methods [12, 15, 17, 20]; discontinuous Petrov-Galerkin methods [5, 14, 13].

Our results show unisolvence for the quasi-polynomial (weighted) spaces used in simplex-averaged finite element (SAFE) discretization [27] for convection-diffusion equations in Hilbert complexes. Such exponentially fitted finite element schemes have been used with success for scalar convection-diffusion equations, i.e., in our terminology for convection-diffusion problems in H(grad). A rough explanation of the ideas behind SAFE discretizations could be as follows: (1) define a variable representing the flux, as in mixed methods, and use a variable change to symmetrize the equation; (2) discretize the differential operator using discretization for the flux and the primal variable; (3) eliminate the flux (locally) and change the variables to obtain a discretization of the original problem. Such a path for the derivation of discrete problems is seen in the pioneering work on discretizing drift-diffusion models in 1D [26] and later in FE and finite volume schemes in higher spatial dimensions [3, 28, 21]. Recently, a more general FEEC approach has brought mechanisms that can utilize higher degree polynomials and can work in any spatial dimension. In addition to the SAFE discretizations [27], the FEEC approach was an important tool in designing exponentially fitted space-time discretizations in [4].

In this work we consider one of the key ingredients needed in steps (2) and (3) above, namely, determining a set of unisolvent functionals for the numerical flux. A typical situation in the discretizations discussed above is the following: Given a polynomial vector space

P, on an n-dimensional simplex T, we discretize the flux using a quasi-polynomial space of differential forms,

where PΛk(T) denotes the space of k-forms in Rn with coefficients from P. For example, for a convection-diffusion equation in H(grad)

, are the moments of

p on edges of T, faces of T and T itself. The classical works [6, 18, 1, 2] usually use the Stokes’ Theorem, when verifying the unisolvence of such functionals for P, and the arguments involve differentiation of p. For quasi-polynomial spaces, with a non-constant weight e(x), such differentiation results in terms that have both derivatives of p and derivatives of e. The standard arguments are, therefore, not applicable except in some special cases, such as the lowest order first kind of Nédélec-Raviart-Thomas elements. Our analysis here circumvents the use of Stokes’ Theorem, and we are able to show that the unisolvence functionals for P are also unisolvence functionals for eP for differential forms of all orders k, in any spatial dimension n, and all polynomial spaces of the first and second kind (Nédélec–Raviart–Thomas [24, 23, 22], Nédélec–Brezzi–Douglas–Marini [23, 22, 9] spaces).

The landscape of the paper can be mapped as follows: Preliminaries and FEEC notation is introduced in Section 2. The unisolvence sets of functionals for the first kind (Nédélec–Raviart–Thomas) and second kind (Nédélec–Brezzi–Douglas–Marini) are discussed in Section 3 and Section 4, respectively. Examples for constructing discretizations of the flux are then given in Section 5, and numerical tests are shown in Section 6.

In this section, we present some preliminary results which will be used in the following sections. We begin by a simple result, frequently used in the analysis.

We denote the spaces of polynomials in n variables of degree at most r and of homogeneous polynomial functions of degree r by Pr(Rn) and Hr(Rn), respectively. We will abbreviate them to Pr and Hr at times. Next, following [1], we present some basic notation commonly used in FEEC when working with polynomial differential forms.

for a unique q∈Hr(Rk+1). The extension, denoted by Ef,T(p), is defined by extending the right-hand side for x∈Rn. It is readily seen that the extension Ef,T(p) is an injective mapping from Pr(f) to Pr(Rn).

By definition of wedge product, we have dλ1∧⋯∧dλn(t1,⋯,tn)=1, which implies that

where volT denotes the volume form in Λn(T).

For any ρ∈Σ0(k,n) and f:=fρ∈Δk(T), an associated differential k-form (called Whitney form) is given by

where the inverted hat represents a suppressed argument. As shown below, the Whitney form gives an explicit formulation of the basis of P−1Λk(T).

In this section we consider the first type quasi-polynomial

We now introduce the geometrical decomposition of P−rΛk(T)∗ and P−rΛk(T). The degrees of freedom of P−rΛk(T) as given in [1, Section 4.6] are

The proof (see, e.g. [1]) that these functionals form a unisolvent set uses induction argument and the Stokes’ Theorem, and the arguments do not carry over to quasi-polynomial spaces. An attempt to prove the result for quasi-polynomial spaces (3.1), however, reveals that the characterization of the trace free part of the P−rΛk(T) plays a crucial role in showing the unisolvence. Such a characterization is given in the theorem below.

Next, we use this Theorem to show that the unisolvence functionals for the polynomial space also work for the quasi-polynomials.

The main result in this section is the following lemma.

Postponing the proof of this lemma for later, we note that its implications show the desired unisolvence results. Indeed, by induction argument (from low dimension sub-simplices to high dimension sub-simplices), it can be easily shown that the functionals given in (3.2) also give degrees of freedom for eP−rΛk(T), and we have the following theorem.

which implies that Trfω=0 by applying Lemma 3.2 again. The proof is completed by an induction argument. ∎

Before we proceed the proof of Lemma 3.2 for general case, we first give some examples to fix the ideas as abstractions can often be difficult to grasp. Noting that cases for k-forms in which k=0 or k=n are trivial.

We note here that the sign of a2 is in accordance with the isomorphism defined in (3.3). Using that λ0+λ1+λ2=1, dλ0=−dλ1−dλ2, and collecting the coefficients of ω∧η then shows that

On the other hand the polynomial function under the integral is non-negative as seen below,

Proof of Lemma 3.2 for 1-forms and any spatial dimension n.

Let us summarize what we have shown so far: Lemma 3.2 holds for any k-form for k=0,1,n−1,n. As a consequence, for spatial dimensions n≤3, we have proved Lemma 3.2 in all the possible cases.

To generalize the ideas for other values of n and k, we proceed as in the special cases considered above. For a given ω∈˚P−rΛk(T), we find a special test form η∈Pr−n+k−1Λn−k(T) so that ω∧η does not change sign on ¯T. This gives us a “mass” matrix M which corresponds to the Whitney form bases in ˚P−rΛk(T) and Pr−n+k−1Λn−k(T).

We now follow this plan and generalize the unisolvence result to discrete differential forms of arbitrary order in any spatial dimension and any quasi-polynomial Hilbert complex of first kind.

Let us fix the spatial dimension n and recall that

We first give the following result relating the maps (0,ρ), ρ∗ and the Whitney forms.

We use the definition of the Whitney form (2.2), to obtain that

The result follows by summing up the identities above. ∎

We verify the statement case by case:

Let us consider a differential form ω∈˚P−rΛk(T). By Theorem 3.1, we can write ω as

We have the following result which generalizes (3.6) and (3.7) for arbitrary n and k.

The main result in this section is shown next.

4.1. Geometrical decomposition of the polynomial spaces of second kind

We now consider the geometrical decomposition of the polynomial spaces associated with the Hilbert complexes of second kind: PrΛk(T)∗ and PrΛk(T). We point out that there is a little (if any) analogy in the proofs for these spaces.

Further, the characterization of the trace free part of the PrΛk(T) is stated below.

We now state the main result of this section showing unisolvence of the functionals used for degrees of freedom (4.2).