On the uniform generation of random derangements

We show how to generate random derangements with the expected distribution of cycle lengths by two different techniques: random restricted transpositions and sequential importance sampling. The algorithms are simple to understand and implement and possess a performance comparable with those of currently known methods. We measure the mixing time (in the chi-square distance) of the randomized algorithm and our data indicate that τ_mix∼ O(nn), where n is the size of the derangement. The sequential importance sampling algorithm generates random derangements uniformly in O(n) time but with a small probability O(1/n) of failing. 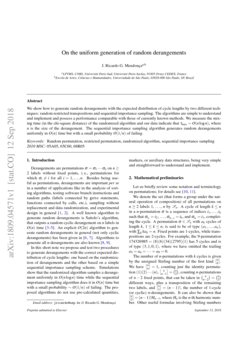 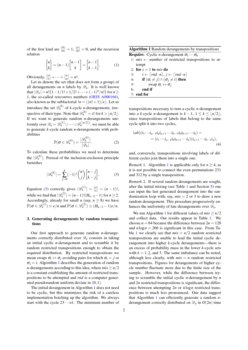 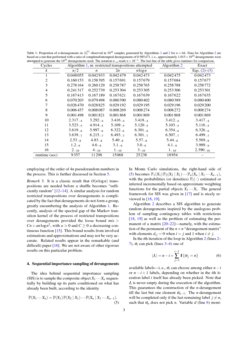 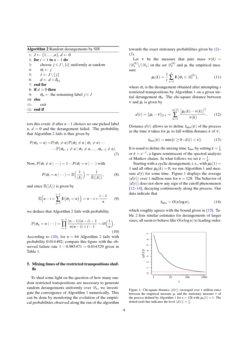 An attempt to trace the birth of importance sampling

In this note, we try to trace the birth of importance sampling (IS) back...
Charly Andral, et al. ∙

We consider an evolving system for which a sequence of observations is b...
Valentina Di Marco, et al. ∙

On estimating the alphabet size of a discrete random source

We are concerned with estimating alphabet size N from a stream of symbol...
Philip Ginzboorg, et al. ∙

Derangements are permutations σ=σ1⋯σn on n≥2 labels such that σi≠i for all i=1,…,n. Besides being useful as permutations, derangements are important per se in a number of applications like in the testing of software branch instructions and random paths and data randomization and experimental design (Sedgewick & Flajolet, 2013; Edgington & Onghena, 2007). A recent review on the generation of random permutations appeared in Bacher et al. (2017). A well known algorithm to generate random derangements is Sattolo’s algorithm, that outputs a random cyclic derangement on n labels in O(n) time (Sattolo, 1986; Gries & Xue, 1988; Prodinger, 2002). An explicit O(2n) algorithm to generate random derangements in general (not only cyclic derangements) has been given in Panholzer et al. (2004) and Martínez et al. (2008). Algorithms to generate all n-derangements are also known (Baril & Vajnovszki, 2004; Korsh & LaFollette, 2004; Wilson, 2009).

In this letter we propose and test two procedures to generate random derangements with the expected distribution of cycle lengths: one based on the randomization of derangements and the other based on a simple sequential importance sampling scheme. Simulations show that the randomized algorithm samples a derangement uniformly in O(nlogn) time while the sequential importance sampling algorithm does it in O(n) time but with a small probability ∼O(1/n) of failing. The proposed algorithms do not use pre-calculated quantities or auxiliary data structures, being straighforward to understand and implement.

Let us briefly review some notation and terminology on permutations; for details see Charalambides (2002) and James & Kerber (1981).

The number of n-permutations with k cycles is given by the unsigned Stirling number of the first kind [nk]. We have [nn]=1, counting just the identity permutation (1)(2)⋯(n), [nn−1]=(n2), counting n-permutations of n−2 fixed points, that can be taken in (nn−2)=(n2) different ways, plus a transposition of the remaining two labels, and [n1]=(n−1)!, the number of 1-cycle (or cyclic) n-derangements. It can be shown that [n2]=(n−1)!Hn−1, where Hn is the n-th harmonic number. Other useful formulae involving Stirling numbers of the first kind are [00]=1, [n0]=0, and the recursion relation

Let us denote the set (that does not form a group) of all n-derangements by Dn. It is well known that

To calculate these probabilities we need to determine |D(k)n|. Perusal of the inclusion-exclusion principle furnishes

The initial derangement in Algorithm 1 does not need to be cyclic, but this minimizes the risk of a careless implementation botching up the algorithm. We always start with the cycle 23⋯n1. The minimum number of transpositions necessary to turn a cyclic n-derangement into a k-cycle n-derangement is k−1, 1≤k≤⌊n/2⌋, since transpositions of labels that belong to the same cycle split it into two cycles,

and, conversely, transpositions involving labels of different cycles join them into a single one.

Algorithm 1 is applicable only for n≥4, as it is not possible to connect the even permutations 231 and 312 by a single transposition.

. This bound results from involved estimations and approximations and may not be very accurate. Related results appear in the remarkable (and difficult) paper by

Hanlon (1996). We are not aware of other rigorous results on this particular problem.

available labels, where the indicator function 1{1}{P}=1 if P is true and 0 otherwise—i. e., σi can choose among either n−i or n−i+1 labels, depending on whether in the i-th iteration label i itself has already been picked. Note that Ji is never empty during the execution of the algorithm. This guarantees the construction of the n-derangement till the last but one element σn−1. The n-derangement will be completed only if the last remaining label j≠n, such that σn does not pick n. Variable d (line 6) monitors this event: if after n−1 choices no one picked label n, d=0 and the derangement failed. The probability that Algorithm 2 fails is thus given by

we deduce that Algorithm 2 fails with probability

To shed some light on the question of how many random restricted transpositions are necessary to generate random derangements uniformly over Dn, we investigate the convergence of Algorithm 1 numerically. This can be done by monitoring the evolution of the empirical probabilities observed along the run of the algorithm towards the exact probabilities given by (3)–(4).

where σs is the derangement obtained after attempting s restricted transpositions by Algorithm 1 on a given initial derangement σ0. The chi-square distance between ν and μt is given by

Distance d(t) allows us to define τmix(ε) of the process as the time it takes for μt to fall within distance ε of ν,

, a figure reminiscent of the spectral analysis of Markov chains. In what follows we set

which roughly agrees with the bound given in Smith (2015). Table 2 lists data for derangements of larger sizes; all seem to behave like O(nlogn) to leading order.

While a simple acception-rejection algorithm generates random derangements in O(n) with an acceptance rate of ∼e−1 ≃0.367, thus being O(e⋅n) (the cost of verifying if the permutation generated is a derangement is negligible), Sattolo’s O(n) algorithm only generates cyclic derangements, and Martínez-Panholzer-Prodinger algorithm, with guaranteed uniformity, is 2n+O(log2n), we described two procedures that are competitive for the efficient generation of random derangements. We found, empirically (Tables 1 and 2), that O(nlogn) random restricted transpositions suffice to spread an initial n-derangement correctly over Dn with the expected distribution of cycle lengths. In terms of the amount of pseudorandom numbers employed, Algorithm 1 employs of the order of 2nlogn pseudorandom numbers and Algorithm 2 (SIS) employs n+O(1) pseudorandom numbers to generate an n

Dn. The advantage of the SIS algorithm is obvious.

The author acknowledges partial financial support from FAPESP (Brazil) through grant No. 2017/22166-9.