On the supersingular GPST attack 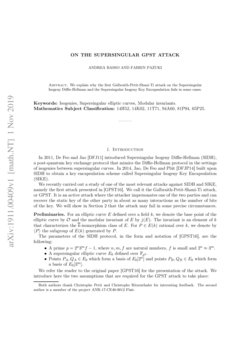 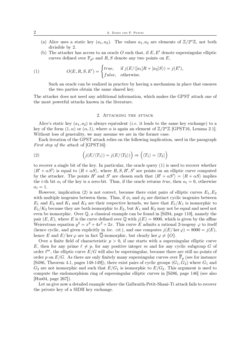 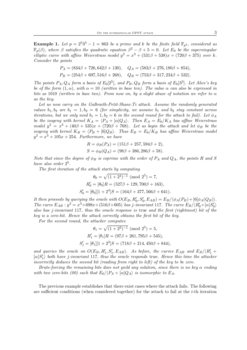 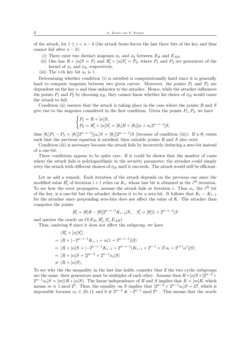 We recently carried out a study of one of the most relevant attacks against SIDH and SIKE, namely the first attack presented in [GPST16]. We call it the Galbraith-Petit-Shani-Ti attack, or GPST. It is an active attack where the attacker impersonates one of the two parties and can recover the static key of the other party in about as many interactions as the number of bits of the key. We will show in Section 2 that the attack may fail in some precise circumstances.

For an elliptic curve E defined over a field k, we denote the base point of the elliptic curve by O and the modular invariant of E by j(E). The invariant is an element of k that characterizes the ¯¯¯k-isomorphism class of E. For P∈E(k) rational over k, we denote by ⟨P⟩ the subgroup of E(k) generated by P.

The parameters of the SIDH protocol, in the form and notation of [GPST16], are the following:

We refer the reader to the original paper [GPST16] for the presentation of the attack. We introduce here the two assumptions that are required for the GPST attack to take place:

The attacker does not need any additional information, which makes the GPST attack one of the most powerful attacks known in the literature.

Each iteration of the GPST attack relies on the following implication, used in the paragraph First step of the attack of [GPST16]:

to recover a single bit of the key. In particular, the oracle query (1) is used to recover whether ⟨R′+αS′⟩ is equal to ⟨R+αS⟩, where R,S,R′,S′ are points on an elliptic curve computed by the attacker. The points R′ and S′ are chosen such that ⟨R′+αS′⟩=⟨R+αS⟩ implies the i-th bit αi of the key is a zero-bit. Thus, if the oracle returns true, then αi=0, otherwise αi=1.

However, implication (2) is not correct, because there exist pairs of elliptic curves E1,E2 with multiple isogenies between them. Thus, if ϕ1 and ϕ2 are distinct cyclic isogenies between E1 and E2 and K1 and K2 are their respective kernels, we have that E1/K1 is isomorphic to E1/K2 because they are both isomorphic to E2, but K1 and K2 may not be equal and need not even be isomorphic. Over Q, a classical example can be found in [Sil94, page 110], namely the pair (E,E), where E is the curve defined over Q with j(E)=8000, which is given by the affine Weierstrass equation y2=x3+4x2+2x. This curve E admits a rational 2-isogeny φ to itself (hence cyclic, and given explicitly in loc. cit.), and one computes j(E/kerφ)=8000=j(E), hence E and E/kerφ are in fact ¯¯¯¯Q-isomorphic, but clearly kerφ≠{O}.

Over a finite field of characteristic p>0, if one starts with a supersingular elliptic curve E, then for any prime ℓ≠p, for any positive integer m and for any cyclic subgroup G of order ℓm, the elliptic curve E/G will also be supersingular, because there are still no points of order p on E/G. As there are only finitely many supersingular curves over ¯¯¯Fp (see for instance [Sil86, Theorem 4.1, pages 148-149]), there exist pairs of cyclic groups (G1,G2) where G1 and G2 are not isomorphic and such that E/G1 is isomorphic to E/G2. This argument is used to compute the endomorphism ring of supersingular elliptic curves in [Sil86, page 146] (see also [Hus04, page 267]).

Let us give now a detailed example where the Galbraith-Petit-Shani-Ti attack fails to recover the private key of a SIDH key exchange.

Note that since the degree of ϕB is coprime with the order of PA and QA, the points R and S have also order 25.

The first iteration of the attack starts by computing

For the second round, the attacker computes

and queries the oracle on O(EB,R′1,S′1,EAB). As before, the curves EAB and EB/⟨R′1+[α]S′1⟩ both have j-invariant 117, thus the oracle responds true. Hence this time the attacker incorrectly deduces the second bit (reading from right to left) of the key to be zero.

Brute-forcing the remaining bits does not yield any solution, since there is no key α ending with two zero-bits (00) such that E0/⟨PA+[α]QA⟩ is isomorphic to EA.

The previous example establishes that there exist cases where the attack fails. The following are sufficient conditions (when considered together) for the attack to fail at the i-th iteration of the attack, for 1≤i<n−3 (the attack brute-forces the last three bits of the key and thus cannot fail after n−3):

Condition 2 ensures that the attack is taking place in the case where the points R and S give rise to the isogenies considered in the first condition. Given the points P1,P2, we have

Condition 3 is necessary because the attack fails by incorrectly deducing a zero-bit instead of a one-bit.

These conditions appear to be quite rare. If it could be shown that the number of cases where the attack fails is polylogarithmic in the security parameter, the attacker could simply retry the attack with different choices of ϕB until it succeeds. The attack would still be efficient.

Let us add a remark. Each iteration of the attack depends on the previous one since the modified value R′i of iteration i+1 relies on Ki, whose last bit is obtained in the ith iteration. To see how the error propagates, assume the attack fails at iteration i. Thus αi, the ith bit of the key, is a one-bit but the attacker deduces it to be a zero-bit. It follows that Ki = Ki−1 for the attacker since prepending zero-bits does not affect the value of K. The attacker then computes the points

and queries the oracle on O(EB,R′i,S′i,EAB).

Thus, omitting θ since it does not affect the subgroup, we have

To see why the the inequality in the last line holds, consider that if the two cyclic subgroups are the same, their generators must be multiples of each other. Assume then R+[α]S+[2n−2+2n−1αi]S=[m](R+[α]S). The linear independence of R and S implies that R=[m]R, which means m≡1mod2n. Thus, the equality on S implies that [2n−2+2n−1αi]S=O, which is impossible because αi∈{0,1} and 0≢2n−2≢−2n−1mod2n . This means that the oracle will return false (unless the two subgroups, ⟨R+[α]S⟩ and ⟨R′i+[α]S′i⟩, give rise again to two isogenies with isomorphic codomain).

The subsequent iterations further propagate the error and the oracle will respond false to every further query (unless, again, the isogenies with different kernels have the same codomain, which is believed to be a rare occurrence). Thus, if the attack fails at the ith iteration, all the following key bits are deduced to be a one-bit. This allows the attacker to approximately identify the part of the key that has been correctly deduced and target, with a different choice of ϕB, only the remaining part.

In this section, we report the source code of a SAGE [S+09] implementation that shows the attack failing in the case detailed in Example 1.