On the Structure of Stable Tournament Solutions 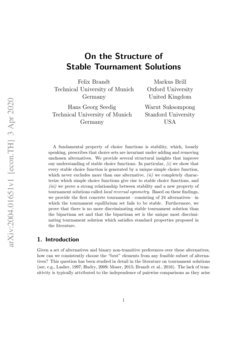 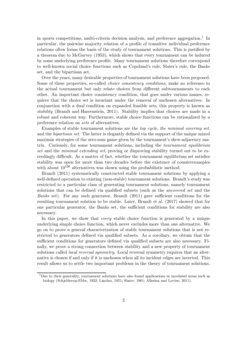 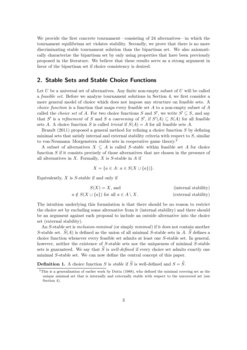 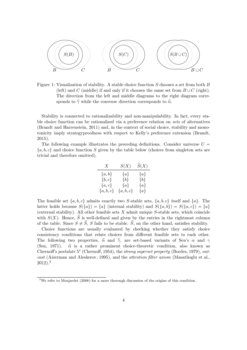 Given a set of alternatives and binary non-transitive preferences over these alternatives, how can we consistently choose the “best” elements from any feasible subset of alternatives? This question has been studied in detail in the literature on tournament solutions [see, Lasl97a, Hudr09a, Mose15a, BBH15a]. The lack of transitivity is typically attributed to the independence of pairwise comparisons as they arise in sports competitions, multi-criteria decision analysis, and preference aggregation.111Due to their generality, tournament solutions have also found applications in unrelated areas such as biology [Schj22a, Land51a, Slat61a, AlLe11a]. In particular, the pairwise majority relation of a profile of transitive individual preference relations often forms the basis of the study of tournament solutions. This is justified by a theorem due to McGa53a, which shows that every tournament can be induced by some underlying preference profile. Many tournament solutions therefore correspond to well-known social choice functions such as Copeland’s rule, Slater’s rule, the Banks set, and the bipartisan set.

Over the years, many desirable properties of tournament solutions have been proposed. Some of these properties, so-called choice consistency conditions, make no reference to the actual tournament but only relate choices from different subtournaments to each other. An important choice consistency condition, that goes under various names, requires that the choice set is invariant under the removal of unchosen alternatives. In conjunction with a dual condition on expanded feasible sets, this property is known as stability [BrHa11a]. Stability implies that choices are made in a robust and coherent way. Furthermore, stable choice functions can be rationalized by a preference relation on sets of alternatives.

Examples of stable tournament solutions are the top cycle, the minimal covering set, and the bipartisan set

. The latter is elegantly defined via the support of the unique mixed maximin strategies of the zero-sum game given by the tournament’s skew-adjacency matrix. Curiously, for some tournament solutions, including the

In this paper, we show that every stable choice function is generated by a unique underlying simple choice function, which never excludes more than one alternative. We go on to prove a general characterization of stable tournament solutions that is not restricted to generators defined via qualified subsets. As a corollary, we obtain that the sufficient conditions for generators defined via qualified subsets are also necessary. Finally, we prove a strong connection between stability and a new property of tournament solutions called local reversal symmetry. Local reversal symmetry requires that an alternative is chosen if and only if it is unchosen when all its incident edges are inverted. This result allows us to settle two important problems in the theory of tournament solutions. We provide the first concrete tournament—consisting of 24 alternatives—in which the tournament equilibrium set violates stability. Secondly, we prove that there is no more discriminating stable tournament solution than the bipartisan set. We also axiomatically characterize the bipartisan set by only using properties that have been previously proposed in the literature. We believe that these results serve as a strong argument in favor of the bipartisan set if choice consistency is desired.

222This is a generalization of earlier work by Dutt88a, who defined the minimal covering set as the unique minimal set that is internally and externally stable with respect to the uncovered set (see sec:tsolutions).

A subset of alternatives X⊆A is called S-stable within feasible set A for choice function S if it consists precisely of those alternatives that are chosen in the presence of all alternatives in X. Formally, X is S-stable in A if

Equivalently, X is S-stable if and only if

A choice function S is stable if ˆS is well-defined and S=ˆS. Stability is connected to rationalizability and non-manipulability. In fact, every stable choice function can be rationalized via a preference relation on sets of alternatives [BrHa11a] and, in the context of social choice, stability and monotonicity imply strategyproofness with respect to Kelly’s preference extension [Bran11c].

The following example illustrates the preceding definitions. Consider universe U={a,b,c} and choice function S given by the table below (choices from singleton sets are trivial and therefore omitted).

The feasible set {a,b,c} admits exactly two S-stable sets, {a,b,c} itself and {a}. The latter holds because S({a})={a} (internal stability) and S({a,b})=S({a,c})={a} (external stability). All other feasible sets X admit unique S-stable sets, which coincide with S(X). Hence, ˆS is well-defined and given by the entries in the rightmost column of the table. Since S≠ˆS, S fails to be stable. ˆS, on the other hand, satisfies stability.

Choice functions are usually evaluated by checking whether they satisfy choice consistency conditions that relate choices from different feasible sets to each other. The following two properties, ˆα and ˆγ, are set-based variants of Sen’s α and γ [Sen71a]. ˆα is a rather prominent choice-theoretic condition, also known as Cher54a’s postulate 5∗ [Cher54a], the strong superset property [Bord79a], outcast [AiAl95a], and the attention filter axiom [MNO12a].333We refer to Monj08a for a more thorough discussion of the origins of this condition.