On the Strong Equivalences of LPMLN Programs

By incorporating the methods of Answer Set Programming (ASP) and Markov Logic Networks (MLN), LPMLN becomes a powerful tool for non-monotonic, inconsistent and uncertain knowledge representation and reasoning. To facilitate the applications and extend the understandings of LPMLN, we investigate the strong equivalences between LPMLN programs in this paper, which is regarded as an important property in the field of logic programming. In the field of ASP, two programs P and Q are strongly equivalent, iff for any ASP program R, the programs P and Q extended by R have the same stable models. In other words, an ASP program can be replaced by one of its strong equivalent without considering its context, which helps us to simplify logic programs, enhance inference engines, construct human-friendly knowledge bases etc. Since LPMLN is a combination of ASP and MLN, the notions of strong equivalences in LPMLN is quite different from that in ASP. Firstly, we present the notions of p-strong and w-strong equivalences between LPMLN programs. Secondly, we present a characterization of the notions by generalizing the SE-model approach in ASP. Finally, we show the use of strong equivalences in simplifying LPMLN programs, and present a sufficient and necessary syntactic condition that guarantees the strong equivalence between a single LPMLN rule and the empty program. 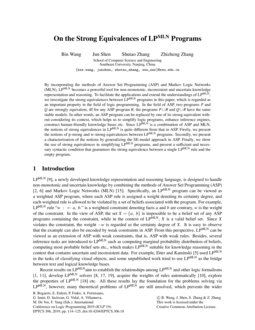 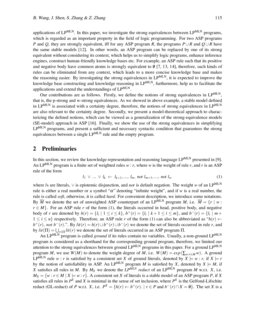 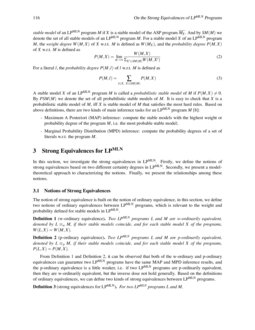 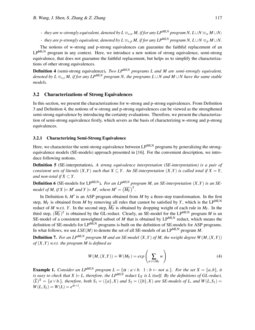 LPMLN [10], a newly developed knowledge representation and reasoning language, is designed to handle non-monotonic and uncertain knowledge by combining the methods of Answer Set Programming (ASP) [3, 7] and Markov Logic Networks (MLN) [16]. Specifically, an LPMLN program can be viewed as a weighted ASP program, where each ASP rule is assigned a weight denoting its certainty degree, and each weighted rule is allowed to be violated by a set of beliefs associated with the program. For example, LPMLN rule “w : ←a, b.” is a weighted constraint denoting facts a and b are contrary, w is the weight of the constraint. In the view of ASP, the set X={a, b} is impossible to be a belief set of any ASP programs containing the constraint, while in the context of LPMLN, X is a valid belief set. Since X violates the constraint, the weight −w is regarded as the certainty degree of X. It is easy to observe that the example can also be encoded by weak constraints in ASP. From this perspective, LPMLN can be viewed as an extension of ASP with weak constraints, that is, ASP with weak rules. Besides, several inference tasks are introduced to LPMLN

MLN suitable for knowledge reasoning in the context that contains uncertain and inconsistent data. For example, Eiter and Kaminski [6] used LPMLN

in the tasks of classifying visual objects, and some unpublished work tried to use LP

MLN as the bridge between text and logical knowledge bases.

Recent results on LPMLNaim to establish the relationships among LPMLN and other logic formalisms [2, 12], develop LPMLN solvers [9, 18, 20], acquire the weights of rules automatically [11], explore the properties of LPMLN [19] etc. All these results lay the foundation for the problems solving via LPMLN, however, many theoretical problems of LPMLN are still unsolved, which prevents the wider applications of LPMLN. In this paper, we investigate the strong equivalences between LPMLN programs, which is regarded as an important property in the field of logic programming. For two ASP programs P and Q, they are strongly equivalent, iff for any ASP program R, the programs P∪R and Q∪R have the same stable models [13]. In other words, an ASP program can be replaced by one of its strong equivalent without considering its context, which helps us to simplify logic programs, enhance inference engines, construct human-friendly knowledge bases etc. For example, an ASP rule such that its positive and negative body have common atoms is strongly equivalent to ∅ [8, 14, 15], therefore, such kinds of rules can be eliminated from any context, which leads to a more concise knowledge base and makes the reasoning easier. By investigating the strong equivalences in LPMLN, it is expected to improve the knowledge base constructing and knowledge reasoning in LPMLN, furthermore, help us to facilitate the applications and extend the understandings of LPMLN.

In this section, we review the knowledge representation and reasoning language LPMLN presented in [10]. An LPMLN program is a finite set of weighted rules w:r, where w is the weight of rule r, and r is an ASP rule of the form

For a literal l, the probability degree P(M,l) of l w.r.t. M is defined as

Two LPMLN programs L and M are w-ordinarily equivalent, denoted by L≡_wM, if their stable models coincide, and for each stable model X of the programs, W(L,X)=W(M,X).

Two LPMLN programs L and M are p-ordinarily equivalent, denoted by L≡_pM, if their stable models coincide, and for each stable model X of the programs, P(L,X)=P(M,X).

Here, we characterize the semi-strong equivalence between LPMLN programs by generalizing the strong-equivalence models (SE-models) approach presented in [17]. For the convenient description, we introduce following notions.

Now, we show some useful properties of the SE-models for LPMLN programs. Proposition 1 is an immediate result according to the definition of SE-models.

Let M be an LPMLN program and (X,Y) an SE-interpretation,

Proposition 2 shows the relationships between the SE-models and the stable models of an LPMLN program.

For an LPMLN program M and a total SE-model (X,X) of M,

Based on above results, a characterization of semi-strong equivalence between LPMLN programs is presented in Lemma 1.

Let L and M be two LPMLN programs, they are semi-strongly equivalent, iff they have the same SE-models, i.e. LSE(L)=LSE(M).

The proof proceeds basically along the lines of the corresponding proof by Turner [17].

For two LPMLN programs L and M, by Lemma 1, if LSE(L)=LSE(M), L and M are semi-strongly equivalent, i.e. for any LPMLN program N, SM(L∪N)=SM(M∪N). Suppose there exist two constants c and k such that for each SE-model (X,Y)∈LSE(L), W(L,(X,Y))=exp(c+k∗α)∗W(M,(X,Y)), we need to show that L and M are p-strongly equivalent. Let N be an LPMLN program, it is easy to check that X is a probabilistic stable model of L∪N iff X is a probabilistic stable model of M∪N, i.e. PSM(L∪N)=PSM(M∪N). For a stable model X∈PSM(L∪N), the probability degree of X can be reformulated as

By the definition of p-strong equivalence, we have L≡_s,pM. ∎

The condition in Lemma 2, called PSE-condition, is sufficient to characterize the p-strong equivalence. One may ask that whether the PSE-condition is also necessary. To answer the question, we need to consider the hard rules of LPMLN particularly. For LPMLN programs containing no hard rules, it is easy to check that the PSE-condition is necessary. But for arbitrary LPMLN programs, this is not an immediate result, which is shown as follows. Firstly, we introduce some notations. For a set U of literals, we use 2U to denote the power set of U, and use 2U+ to denote the maximal consistent part of the power set of U, i.e. 2U+={X∈2U | X is consistent }.

By Lemma 3, for two p-strongly equivalent LPMLN programs L and M, to prove the necessity of the PSE-condition, we need to find a set E of LPMLN programs satisfying

For two consistent sets X and Y of literals, and an atom a such that a∉X∪Y, by R(X,Y,a) we denote an LPMLN program as follows

For an LPMLN program M and a set U of literals such that lit(¯¯¯¯¯¯M)⊆U, a flattening extension Tk(M,U) of M w.r.t. U is defined as

According to the splitting set theorem of LPMLN [19], the flattening extension has following properties.

and we have T1(L,U)=T0(L,U)∪R(U,∅,c_1). The stable models and their weight degrees of L, T0(L,U), and T1(L,U) are shown in Table 1. From the table, we can observe that the flattening extension can be used to adjust the sets of literals that satisfy the most hard rules.

Let L and M be two p-strongly equivalent LPMLN programs, and U=lit(¯¯¯¯¯¯¯¯¯¯¯¯¯¯¯¯L∪M). For two consistent subsets X and Y of U, there exists a flattening extension Tk(L,U) such that X and Y are probabilistic stable models of Tk(L,U).

Consider LPMLN programs L={ w_1:a∨b. w_2:b←a.} and M={w_3:b. w_4:a←not b.}, where w_i (1≤i≤4) is a variable denoting the weight of corresponding rule. It is easy to check that ({b},{a,b}) is the unique non-total SE-model of L and M, therefore, L and M are semi-strongly equivalent. If the programs are also p-strongly equivalent, we have following system of linear equations, where C=exp(k∗α+c) and U={a,b}.

Consider three LPMLN programs L={α:a←a.}, M={α:←a.}, and N={1:a.}. It is easy to check that rules in L and M are valid and semi-valid, respectively. Table 2 shows the stable models and their probability degrees of LPMLN programs N, L∪N, and M∪N. It can be observed that eliminating the rule of M from M∪N makes all stable models of M∪N probabilistic, which means semi-valid rules cannot be eliminated directly.

Algorithm 1 provides a framework to simplify and solve LPMLN programs based on the notions of semi-valid and valid LPMLN rules. Firstly, simplify an LPMLN program M by removing all semi-valid and valid rules (line 2 - 8). Then, compute the stable models of the simplified LPMLN program via using some existing LPMLN solvers, such as LPMLN2ASP, LPMLN2MLN [9], and LPMLN-Models [20] ect. Finally, compute the probability degrees of the stable models w.r.t. the simplified program and all semi-valid rules (line 9 - 12). The correctness of the algorithm can be proved by corresponding definitions.

In Algorithm 1, a crucial problem is to decide whether an LPMLN rule is valid or semi-valid. Theoretically, it can be done by checking the SE-models of a rule, however, the approach is highly complex in computation. Therefore, we investigate the syntactic conditions for the problem. Table 3 shows five syntactic conditions for a rule r, where TAUT and CONTRA have been introduced to investigate the program simplification of ASP [15, 5], CONSTR1 means the rule r is a constraint, and CONSTR3 is a special case of CONSTR1. Rules satisfying CONSTR2 is usually used to eliminate constraints in ASP, for example, rule “←a.” is equivalent to rule “p←a, not p.”, if the atom p does not occur in other rules. Based on these conditions, we present the characterization of semi-valid and valid LPMLN rules.

An LPMLN rule w:r is semi-valid, iff the rule satisfies one of TAUT, CONTRA, CONSTR1 and CONSTR2.

An LPMLN rule w:r is valid, iff one of following condition is satisfied

also contribute to the field of knowledge acquiring. On the one hand, although it is impossible that rules of the form TAUT, CONTRA, and CONSTR3 are constructed by a skillful knowledge engineer, these rules may be obtained from data via rule learning. Therefore, we can use TAUT, CONTRA, and CONSTR3 as the heuristic information to improve the results of rule learning. On the other hand, CONSTR1 and CONSTR2 imply a kind of methodology of problem modeling in LP

MLN, that is, we can encode objects and relations by LPMLN rules and facts, and adjust the certainty degrees of inference results by LPMLN constraints. In fact, this is the core idea of ASP with weak constraints, LPMLN is more flexible by contrast, since LPMLN provides weak facts and rules besides weak constraints.

For the future, we plan to improve the equivalences checking in the paper, and use these technologies to enhance LPMLN solvers. And we also plan to extend the strong equivalence discovering method introduced in [14] to LPMLN, which would help us to decide strong equivalence via some syntactic conditions.

We are grateful to the anonymous referees for their useful comments. The work was supported by the National Key Research and Development Plan of China (Grant No.2017YFB1002801).