In this paper, we present a stochastic geometry based framework to analyze the performance of downlink indoor visible light communication (VLC) networks at a typical receiver while considering reflections from the walls. A typical receiver is a arbitrarily located user in the room and may not necessarily be at the center and hence sees an asymmetric transmitter location process and interference at itself. We first derive the signal-to-interference-plus-noise ratio (SINR) and rate coverage probability for a typical user. We then present a framework to model the impact of wall reflections and extend the analysis to study the performance of VLC network in the presence of wall reflections. We show that the impact of user's location and reflections is significant on the performance of the user. 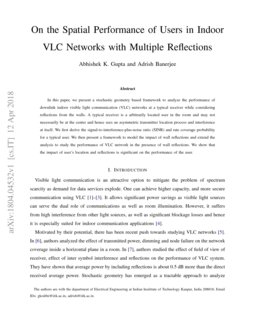 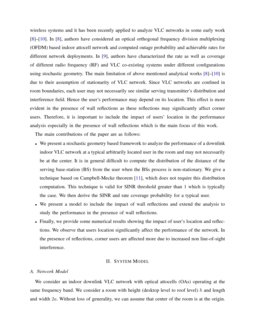 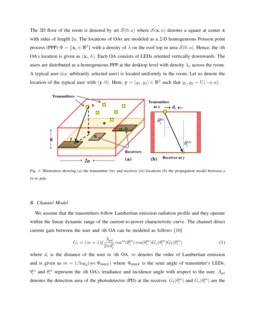 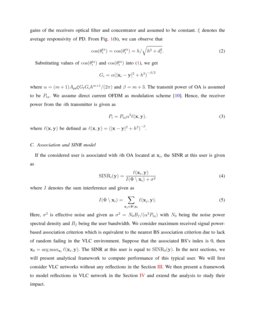 On Spectrum Sharing Among Micro-Operators in 5G

The growing demand in indoor small cell networks has given rise to the c...
Tachporn Sanguanpuak, et al. ∙

This work is focused on the system-level performance of a broadcast netw...
Kanchan Chaurasia, et al. ∙

In this paper, we present the downlink coverage and rate analysis of a c...
Vishnu Vardhan Chetlur, et al. ∙

In this article, we consider a random access scheme for an indoor Intern...
Milica Petkovic, et al. ∙

Motivated by their potential, there has been recent push towards studying VLC networks [5]. In [6], authors analyzed the effect of transmitted power, dimming and node failure on the network coverage inside a horizontal plane in a room. In [7], authors studied the effect of field of view of receiver, effect of inter symbol interference and reflections on the performance of VLC system. They have shown that average power by including reflections is about 0.5 dB more than the direct received average power. Stochastic geometry has emerged as a tractable approach to analyze wireless systems and it has been recently applied to analyze VLC networks in some early work[8, 9, 10]. In [8], authors have considered an optical orthogonal frequency division multiplexing (OFDM) based indoor attocell network and computed outage probability and achievable rates for different network deployments. In [9], authors have characterized the rate as well as coverage of different radio frequency (RF) and VLC co-existing systems under different configurations using stochastic geometry. The main limitation of above mentioned analytical works [8, 9, 10] is due to their assumption of stationarity of VLC network. Since VLC networks are confined in room boundaries, each user may not necessarily see similar serving transmitter’s distribution and interference field. Hence the user’s performance may depend on its location. This effect is more evident in the presence of wall reflections as these reflections may significantly affect corner users. Therefore, it is important to include the impact of users’ location in the performance analysis especially in the presence of wall reflections which is the main focus of this work.

The main contributions of the paper are as follows:

We consider an indoor downlink VLC network with optical attocells (OAs) operating at the same frequency band. We consider a room with height (desktop level to roof level) h and length and width 2a. Without loss of generality, we can assume that center of the room is at the origin. The 2D floor of the room is denoted by set S(0,a) where S(x,a) denotes a square at center x with sides of length 2a. The locations of OAs are modeled as a 2-D homogeneous Poisson point process (PPP) Φ={xi∈R2} with a density of λ on the roof top in area S(0,a). Hence, the ith OA’s location is given as (xi,h). Each OA consists of LEDs oriented vertically downwards. The users are distributed as a homogeneous PPP at the desktop level with density λu across the room. A typical user (i.e. arbitrarily selected user) is located uniformly in the room. Let us denote the location of the typical user with (y,0). Here, y=(y1,y2)∈R2 such that y1,y2∼U(−a,a).

We assume that the transmitters follow Lambertian emission radiation profile and they operate within the linear dynamic range of the current-to-power characteristic curve. The channel direct current gain between the user and ith OA can be modeled as follows [10]

where di is the distance of the user to ith OA. m denotes the order of Lambertian emission and is given as m=1/log2(secΨHALF) where ΨHALF is the semi angle of transmitter’s LEDs. θtxi and θrxi represent the ith OA’s irradiance and incidence angle with respect to the user. Apd denotes the detection area of the photodetector (PD) at the receiver. Gf(θrxi) and Gc(θrxi) are the gains of the receiver’s optical filter and concentrator and assumed to be constant. ξ denotes the average responsivity of PD. From Fig. 1(b), we can observe that

where α=(m+1)ApdξGfGchm+1/(2π) and β=m+3. The transmit power of OA is assumed to be Ptx. We assume direct current OFDM as modulation scheme [10]. Hence, the receiver power from the ith transmitter is given as

If the considered user is associated with ith OA located at xi, the SINR at this user is given as

where I denotes the sum interference and given as

Here, σ2 is effective noise and given as σ2=N0Bf/(α2Ptx) with N0 being the noise power spectral density and Bf being the user bandwidth. We consider maximum received signal power-based association criterion which is equivalent to the nearest BS association criterion due to lack of random fading in the VLC environment. Suppose that the associated BS’s index is 0, then x0=argmaxxiℓ(xi,y). The SINR at this user is equal to SINR0(y). In the next sections, we will present analytical framework to compute performance of this typical user. We will first consider VLC networks without any reflections in the Section III. We then present a framework to model reflections in VLC network in the Section IV and extend the analysis to study their impact.

In this section, we will first compute the probability of SINR and rate coverage of a user at y and then compute the coverage for a typical user in a VLC network without any reflections.

The SINR coverage probability Pc(τ,y) of a user located at y is defined as the probability that the SINR at this user is greater than the threshold τ i.e.

We assume that SINR threshold τ≥1. From [12], it can be shown that at maximum, only one OA can have SINR greater than 1 (and hence τ). In other words,

Therefore, the probability of SINR coverage is given as

From Campbell-Mecke theorem and Sliynak theorem [11], (7) can be further solved as

where Ay=S(−y,a)∩B(0,aD). Here, B(a,r) denotes a ball of radius r and center a. Note that due to absence of fading, there is a certain radius aD around the receiver in which associated OA must be located otherwise the signal strength is smaller than the noise power, making SNR (and hence SINR) less that τ. From the Gill Pelaez inversion Lemma [13], the CDF of the sum interference I can be expressed in terms of its Laplace transform LI() as

Note that (11) requires computation of LI() which we give in the following Lemma.

From Theorem 1, the following corollaries establishing the relation between performance of a corner (located at [a,a]) and a center (located at [0,0]) user can be derived:

For the case where noise is zero and the transmitters and the receivers are at the same height, the SINR coverage for a corner user is equal to that of a center user.

Now, the SINR coverage probability for the arbitrarily located typical user can be computed as

is due to the uniform distribution assumption of

In this section, we derive the rate coverage which is defined as the probability that the rate of a user at y is greater than the threshold ρ,

Let W be the total bandwidth available at each OA. Assuming the time-division access for providing access to mutiple users at a single OA [8], the per user rate can be given as [9]

where n is the mean number of users (or load) associated with the serving OA and ζ1,ζ2 are some coefficients due to practical constraints. Since the user distribution is also assumed to be PPP, the mean load with the typical user can be modeled similarly to [14] to be n=1+1.28λu/λ. Now, Rc(ρ,y) can be derived in terms of coverage probability as follows:

where Pc is given in (13). The rate coverage for an arbitrarily located typical user is given as

where η is due to reflection loss and dependent on the wall material [16]. Combining the path-loss for x∈S(0,a) (given in (3) and x∈FI (given in (18)), we get the following pathloss function

Note that all sets Fk are mutually disjoint and cover whole space R2. We have assumed their independence. Therefore, the union of all reflection images and real transmitters form a PPP with density λ due to the superposition theorem [12].

Let us consider reflections upto the Kth order only. In this case, the union of all transmitters will be a PPP over the space ∪kFk. Now, similar to the no reflection case, we can apply Campbell-Mecke theorem and Sliynak theorem in (7) to get

where Bky=Fk(−y,a)∩B(0,bkD). Here, bkD shows the radius in which virtual transmitter of kth order must be located. Now, following the steps similar to Appendix A, we can compute the Laplace transform of interference which is given in the following Lemma.

Using Lemma 1 and the Gil-Paleaz Lemma similar to the previous section, we get the following theorem.

Following the steps similar to the Section III, SINR and rate coverage for an arbitrarily located user can be computed.

We will now provide some numerical results based on the analysis and derive design insights for VLC networks. In the simulation, we have considered a indoor VLC network deployed in a room with dimensions 18×18×3.5 m3. All relevant simulation parameters are given in the Table I [10].

SINR and rate coverage of users at various locations: We have considered four different user locations: user located at the corner (L1=[a,a]), the edge (L2=[a,0]), halfway (L3=[a√2,a√2]) and the center (L4=[0,0]) of the room. Fig. 3 and Fig. 4 show the SINR and rate coverage of the users at the above mentioned locations for no reflection case. We can observe that the performance of a VLC network significantly depends on the user location. Hence, the typical user can not be assumed to be at the center only and it is very important to include the impact of user’s location into its performance. This effect is due to the non-zero value of room height (h) as discussed in the Section III.

In this paper, we have presented a framework to analyze an indoor VLC network for a typical user while considering multiple reflections from the walls. We showed that SINR and rate coverage of a user significantly depend on the location of the user. We also showed that reflections can be an important factor while computing performance for corner and edge users.

The Laplace transform of the sum interference is given as

Appendix B Proof of Theorem 1

Now, expectation with respect to x can be moved inside to get Pc(τ,y)

Now using taking noise term outside integration and applying the definition of K and F, we get the Theorem.