On the Spanning and Routing Ratio of Theta-Four

We present a routing algorithm for the Theta-4-graph that computes a path between any two vertices s and t having length at most 17 times the Euclidean distance between s and t. To compute this path, at each step, the algorithm only uses knowledge of the location of the current vertex, its (at most four) outgoing edges, the destination vertex, and one additional bit of information in order to determine the next edge to follow. This provides the first known online, local, competitive routing algorithm with constant routing ratio for the Theta-4-graph, as well as improving the best known upper bound on the spanning ratio of these graphs from 237 to 17. 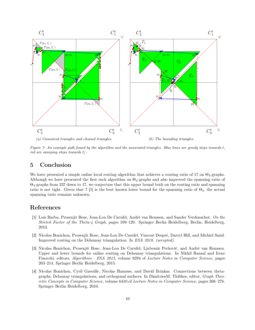 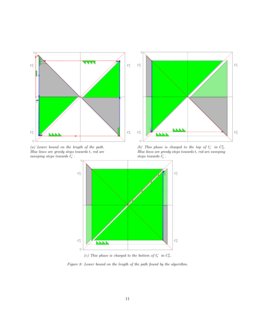 We study online routing algorithms on the Θ6-graph and the half-Θ6-graph...
Prosenjit Bose, et al. ∙

Online routing in a planar embedded graph is central to a number of fiel...
Vikrant Ashvinkumar, et al. ∙

A geometric graph in the plane is angle-monotone of width γ if every pai...
Anna Lubiw, et al. ∙

Routing on the Visibility Graph

We consider the problem of routing on a network in the presence of line ...
Prosenjit Bose, et al. ∙

Finding a path in a graph is a fundamental problem in computer science. Typically, algorithms that compute paths in graphs have at their disposal knowledge of the whole graph. The problem of finding a path in a graph is more difficult in the online setting, when the routing algorithm must explore the graph as it attempts to find a path. Moreover, the situation is even more challenging if the routing algorithm only has a constant amount of working memory, i.e. it can only remember a constant size subgraph of the portion of the graph it has explored. Specifically, an online routing algorithm attempting to find a path from one vertex to another is called local if at each step, the only information it can use to make its forwarding decision is the location of the current vertex and its neighbouring vertices, plus a constant amount of additional information.

For a routing algorithm A and a given graph G from a class G of graphs, let PAG(s,t) be the path found by A from s to t. The class of graphs we focus on are a subclass of weighted geometric graphs. A weighted geometric graph G=(P,E) consists of a set P of points in the plane and a set E of (directed or undirected) edges between pairs of points, where the weight of an edge (p,q) is equal to the Euclidean distance L2(p,q) between its endpoints (i.e., distance in the L2-metric). For a pair of vertices s and t in P, let PG(s,t) be the shortest path from s to t in G, and let L2(PG(s,t)) be the length of PG(s,t) with respect to the L2-metric. The spanning ratio of a graph G is the minimum value c such that L2(PG(s,t))≤c⋅L2(s,t) over all pairs of points s and t in G. A graph is called a c-spanner, or just a spanner, if its spanning ratio is at most some constant c. The routing ratio of a local online routing algorithm A on G is the maximum value c′ such that L2(PAG(s,t))≤c′⋅L2(s,t) for all G∈G and all pairs s and t in G. When c′ is a constant, such an algorithm is called competitive on the class G. Note that the routing ratio on a class of graphs G is an upper bound on the spanning ratio of G, since the routing ratio proves the existence of a bounded-length path.

Let k≥3 be an integer and for each i with 0≤i<k, let Ri be the ray emanating from the origin that makes an angle of 2πi/k with the negative y-axis. For each i with 0≤i≤k, let Ci be the cone consisting of all points in the plane that are on or between the rays Ri and Ri+1. The Θk-graph of a given set P of points is the directed graph that is obtained in the following way. The vertex set is the set P. Each vertex v has at most k outgoing edges: For each i with 0≤i<k, let Cvi be the cone obtained by translating Ci such that its apex is at v. If Cvi contains at least one point of P∖{v}, then let wi be such a point whose perpendicular projection onto the bisector of Cvi is closest to v (where closest refers to the Euclidean distance). Then the Θk-graph contains the directed edge (v,wi). See Figure 1 for an example with k=4.

For Θk-graphs, there is a simple routing algorithm called cone-routing that is competitive for k≥7. To route from a vertex s to a vertex t, let Csi be the cone of s that contains t. We forward the packet from s to its neighbour in Csi. Let θ=2π/k, then for k≥7 cone routing gives a routing ratio of 1/(1−2sin(θ/2)). Cone routing also has the advantage of only utilizing outgoing edges, so each vertex needs only to store the location of at most k neighbours. For k<7, cone-routing does not necessarily give a short path, however, for k=6, Bose et al. [7] show that a different local online routing algorithm gives a routing ratio of 2. There are currently no known competitive routing algorithms for k=5 and k=4.

In this paper we improve the upper bound of the spanning ratio of Θ4 from 237 to 17. We do this by providing a local online routing algorithm with a routing ratio of at most 17. This is the first local routing algorithm on Θk-graphs for k=4, bringing us one step closer to obtaining competitive routing strategies on all Θk-graphs with k>3. The algorithm is simple, and only uses knowledge of the destination vertex, the current vertex v, the neighbours of v, and one bit of additional information. Additionally, like cone-routing, we route using only outgoing edges, so each vertex only needs to store the location of its at most 4 out-going neighbours. For the remainder of the paper, all edges (u,v) are considered directed outgoing edges from u to v, and when we refer to the neighbour v of a vertex u in a cone Cui, we are referring to the outgoing edge (u,v) of u.

The rest of the paper is organized as follows. Section 2 gives the details of the routing algorithm that is used to navigate the Θ4-graph. In Section 3 we analyze the length of the path found by the algorithm, and show an upper bound of 17 on the routing ratio. In Section 4 we give an example of a path that shows this approach cannot do any better than a routing ratio of 17. Section 5 concludes the paper and gives some directions for future work.

We now define the algorithm. Let s be the source vertex and t the target vertex. We assume that t lies at the point (0,0) and the cones are axis aligned. Choose the diagonal through t that is in the same cone of t as s. Without loss of generality, assume that s is in Ct2 under ℓ−t, thus we choose ℓ−t. Let v be the current vertex. Then the algorithm is:

Observe that our algorithm requires knowledge of the current vertex v, its 4 outgoing edges, the destination vertex t, and one additional bit of information (signifying the chosen diagonal of t) in order to route to t.

In this section, we prove that our routing algorithm terminates and that it has a routing ratio of 17. Without loss of generality, we assume that s is in Ct2 under ℓ−t. Thus ℓ−t is the closest diagonal of t to s. Let dx(u,v) and dy(u,v) be the distance between u and v along the x-axis and y-axis respectively. Let L1(u,v) be the L1 distance between u and v (i.e., L1(u,v)=dx(u,v)+dy(u,v)), and let L∞(u,v) be the L∞ distance from u to v (i.e., L∞(u,v)=max{dx(u,v),dy(u,v)}). To simplify our analysis, we will analyze the length of the path produced using the L1 metric. Let P(s,t) be the sequence of directed edges (a,b) chosen by the algorithm. For vertices u and v in P(s,t), with u occurring before v, let \pathu,v be the subpath of P(s,t) from u to v.

We note the following about the path found by the algorithm:

This leads to the following corollary.

Let v be the neighbour of u in the cone Cui. Let the canonical triangle Tuv be the triangle formed by the boundaries of Cui and the line through v perpendicular to the bisector of Cui. Note that Tuv is empty of vertices in its interior. See Fig. 2(b).

Consider the edge (pi,qi) of fi. If pi is in the Northern or Southern quadrant, then let L be the horizontal line through pi, otherwise L is the vertical line through pi. Let the bounding triangle Ti be the triangle formed by the lines ℓ−t, L, and ℓ+qi. See Fig. 4.

The bounding triangle Ti is empty of vertices.

Lemma 3.1 has strong implications about the positions of bounding triangles relative to one another in the same quadrant. For a vertex p, let ¯p be the intersection of ℓ−t and ℓ+p.

If Ti and Tj are two bounding triangles in the same quadrant, then ¯pj¯qj and ¯pi¯qi are disjoint segments lying along ℓ−t.

Fig. 5 shows two consecutive bounding triangles in the Western quadrant, and the associated segments ¯pi¯qi and ¯pj¯qj, where in this case j=i+1.

Let p′1 be the vertical projection of p1 onto ℓ−t. Then the following inequality is true.

This follows from the fact that (pi,qi) is an edge, and \pathqi,pi+1 is x- and y-monotone. ∎

Each of these bounding triangles Ti and their associated segments ¯pi¯qi are associated with a phase fi. A natural approach is to try and bound the length of the phase L2(fi) to the length of the segment ¯pi¯qi. This does not quite work. However, by using a potential function we are able to make it work. We define the potential function Φ(pi,pi+1)=L1(pi,qi)+L1(qi,¯pi+1)−L1(pi,¯pi) for all 1≤i<m−1.

Otherwise pi is on the opposite side of ℓ−t as qi. Without loss of generality, assume that pi is in the Northern quadrant (thus qi is in the Western quadrant). See Fig. 6. Observe that L1(qi,¯pi+1)<L1(pi,qi). Thus

Fig. 7 is a complete path P(s,t) where multiple examples are illustrated.

In Fig. 7(a) we see the initial sweeping steps towards ℓ−t and the next two complete phases. Let ϵ>0 be an arbitrarily small number. The first phase starts ϵ closer to t than s. The dotted lines represent a series of small steps. The green triangles represent canonical triangles. The red paths are sweeping steps towards ℓ−t, while the blue paths are greedy steps towards t. The first red path has length L2(s,t). The first blue path and the second red path are a sequence of consecutive phases in the Western quadrant. The length of the blue path is (2−2ϵ)⋅L2(s,t). The red path is (2−4ϵ)⋅L2(s,t).

The second blue path followed by the third red path represent the phases in the Eastern quadrant. Together their length is 2(2−5ϵ)⋅L2(s,t).

In Fig. 7(c), the final phase is located in the Southern quadrant (since that is the location of the base vertex). The length of the blue plus the red path is 2(2−7.5ϵ)⋅L2(s,t).