An equilibrium of a linear elastic body subject to loading and satisfying the friction and contact conditions can be described by a variational inequality of the second kind and the respective discrete model attains the form of a generalized equation. To its numerical solution we apply the semismooth* Newton method by Gfrerer and Outrata (2019) in which, in contrast to most available Newton-type methods for inclusions, one approximates not only the single-valued but also the multi-valued part. This is performed on the basis of limiting (Morduchovich) coderivative. In our case of the Tresca friction, the multi-valued part amounts to the subdifferential of a convex function generated by the friction and contact conditions. The full 3D discrete problem is then reduced to the contact boundary. Implementation details of the semismooth* Newton method are provided and numerical tests demonstrate its superlinear convergence and mesh independence. 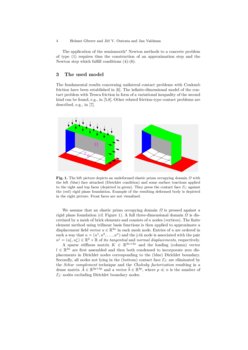 In the paper, a variant of the Newton method is developed for the numeri...
H. Gfrerer, et al. ∙

We prove the convergence of a damped Newton's method for the nonlinear s...
Gerard Awanou, et al. ∙

We present a new family of fast and robust methods for the calculation o...
Mohamad Fathi, et al. ∙

In this article, we offer a novel numerical approach for the solution of...
Peeyush Singh, et al. ∙

Frictional contact is one of the most challenging problems in computatio...
Andrea Franceschini, et al. ∙

In [3] the authors developed a new, so-called semismooth∗ Newton-type method for the numerical solution of an inclusion

where F:Rn⇉Rn is a closed-graph multifunction. In contrast to existing Newton-type method F is approximated on the basis of the limiting (Mordukhovich) normal cone to the graph of F, computed at the respective point. Under appropriate assumptions, this method exhibits local superlinear convergence and, so far, it has been successfully implemented to the solution of a class of variational inequalities (VIs) of the first and second kind, cf. [3] and [4]. This contribution is devoted to the application of the semismooth∗ method to the discrete 3D contact problem with Tresca friction which is modelled as a VI of the second kind. Therefore the implementation can be conducted along the lines of [4]. The paper has the following structure: In Section 2 we describe briefly the main conceptual iterative scheme of the method. Section 3 deals with the considered discrete contact problem and Section 4 concerns the suggested implementation. The results of numerical tests are then collected in Section 5.

We employ the following notation. For a cone K, K0 stands for its (negative) polar and for a multifunction F:Rn⇉Rn, domF and gphF denote its domain and its graph, respectively. The symbol “A→” means the convergence within the set A, ∥B∥F denotes the Frobenius norm of a matrix B and Bδ(x) signifies the δ− ball around x.

For the reader’s convenience we recall fist the definition of the tangent cone and the limiting (Mordukhovich) normal cone.

The latter cone will be extensively used in the sequel. Let us assign to a pair (~x,~y)∈gphF two [n×n] matrices A,B such that their i-th rows, say u∗i,v∗i, fulfill the condition

The general conceptual iterative scheme of the semismooth∗ Newton method is stated in Algorithm 1 below.

Let ¯x be a (local) solution of (1). Since \tensor∗[k]x need not belong to domF or 0 need not be close to F(\tensor∗[k]x) even if \tensor∗[k]x is close to ¯x; one performs in step 3 an approximate projection of (\tensor∗[k]x,0) onto gphF. Therefore the step 3 is called the approximation step. The Newton step 4 is related to the following fundamental property, according to which the method has been named.

Let (~x,~y)∈gphF. We say that F is semismooth∗ at (~x,~y) provided that for every ϵ>0 there is some δ>0 such that the inequality

cf. [3, Proposition 4.3]. This is the background for the Newton step in Algorithm 1.

Finally, concerning the convergence, assume that F is semismooth∗ at (¯x,0) and there are positive reals L,κ such that for every x∉F−1(0) sufficiently close to ¯x the set of quadruples (^x,^y,A,B), satisfying the conditions

is nonempty. Then it follows from [3, Theorem 4.4], that Algorithm 1 either terminates at ¯x after a finite number of steps or converges superlinearly to ¯x whenever \tensor∗[0]x is sufficiently close to ¯x.

The application of the semismooth∗ Newton methods to a concrete problem of type (1) requires thus the construction of an approximation step and the Newton step which fulfill conditions (4)-(6).

We assume that an elastic prism occupying domain Ω is pressed against a rigid plane foundation (cf. Figure 1). A full three-dimensional domain Ω is discretized by a mesh of brick elements and consists of n

u∈R3n in each mesh node. Entries of u are ordered in such a way that u=(u1,u2,…,un) and the j-th node is associated with the pair uj=(ujτ,ujν)∈R2×R of its tangential and normal displacements, respectively.

A sparse stiffness matrix K∈R3n×3n and the loading (column) vector l∈R3n are first assembled and then both condensed to incorporate zero displacements in Dirichlet nodes corresponding to the (blue) Dirichlet boundary. Secondly, all nodes not lying in the (bottom) contact face ΓC are eliminated by the Schur complement technique and the Cholesky factorization resulting in a dense matrix ~A∈R3p×3p and a vector ~b∈R3p, where p≪n is the number of ΓC nodes excluding Dirichlet boundary nodes.

At last, all local 3×3 blocks of ~A and all 3×1 blocks of ~b are expanded to 4×4 blocks and 4×1 blocks, respectively in order to incorporate the non-penetrability condition

where λi∈R+ is the Lagrange multiplier associated with non-penetrability constraint. Here and in the following, we assume that i=1,…,p. In this way, we obtain a dense regular matrix A∈R4p×4p and a (column) vector b∈R4p.

Finally, let us simplify the notation via

Following the development in [1], our model attains the form of generalized equation (GE)

where the single-valued function f:R4p→R4p is given by

and the multifunction ˜Q:R4p⇉R4p by

with ϕ≥0 being the friction coefficient. GEs of the type (7) have been studied in [4] and so all theoretical results derived there are applicable. For our approach it is also important that the Jacobian ∇f(¯x) is positive definite.

4 Implementation of the semismooth∗ method

In order to facilitate the approximation step we will solve, instead of GE (7), the enhanced system

In the approximation step we suggest to solve for all i consecutively the next three low-dimensional strictly convex optimization problems:

Thereafter we compute the outcome of the approximation step via

In the Newton step we put

is an identity matrix and block diagonal matrices

where the diagonal blocks Gi,Hi∈R4×4 have the structure

This choice ensures that matrices (I,B) with B given by (9) fulfill conditions (5),(6) with F replaced by F.

Stopping rule It is possible to show (even for more general Coulomb friction model [1]) that there is a Lipschitz constant cL>0 such that,

tested after the approximation step, may serve as a simple yet efficient stopping rule.

We assume that the domain

and the friction coefficient ϕ=1.

The domain is uniformly divided into ex⋅ey⋅ez hexahedra (bricks), where

are numbers of hexahedra along with coordinate axis, ℓ denotes the mesh level of refinement and ⌈⋅⌉ the ceiling function. Consequently the number of Ω nodes n and the number of ΓC nodes p read

Table 1 reports on the performance of the whole method for various meshes assuming zero initial approximation \tensor∗[0]x=0 and the stopping criterion ϵ=10−6. We can clearly see that the number of iterations of the semismooth∗ Newton method (displayed in the last column) only slightly increase with the mesh size. This behaviour shows that the method is mesh-independent.

Figure 2 visualizes a deformed contact boundary together with a deformation of the full domain Ω obtained by post-processing. Displacements of non-contact boundary nodes are then obtained from a linear system of equations with the matrix K and the vector l.

It is based on original codes of [1] and its performance is further enhanced by a vectorized assembly of K using [2].

The choice (9) of matrices A,B in the Newton step of the method is not unique and may be used to simplify the linear system in the Newton step. The convergence may be further accelerated by an appropriate scaling in the approximation step.

Authors are grateful to Petr Beremlijski (TU Ostrava) for providing original Matlab codes of [1] and discussions leading to various improvements of our implementation.