In this paper, we consider the number of both arrivals and departures seen by a tagged customer while in service in a classical M/M/1 processor sharing queue. By exploiting the underlying orthogonal structure of this queuing system revealed in an earlier study, we compute the distributions of these two quantities and prove that they are equal in distribution. We moreover derive the asymptotic behavior of this common distribution. The knowledge of the number of departures seen by a tagged customer allows us to test the validity of an approximation, which consists of assuming that the tagged customer is randomly served among those customers in the residual busy period of the queue following the arrival of the tagged customer. A numerical evidence shows that this approximation is reasonable for moderate values of the number of departures, given that the asymptotic behaviors of the distributions are very different even if the exponential decay rates are equal. 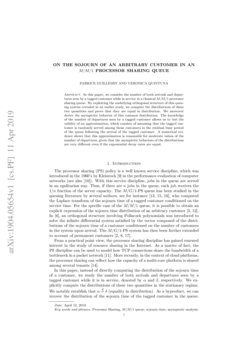 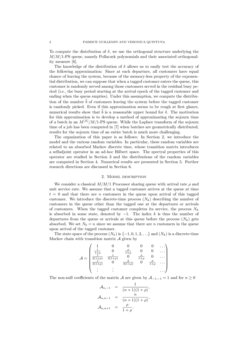 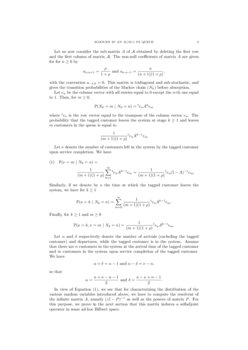 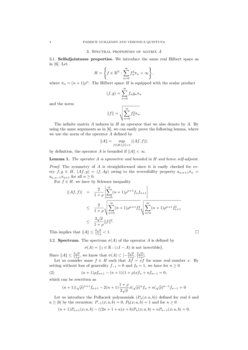 The processor sharing (PS) policy is a well known service discipline, which was introduced in the 1960’s by Kleinrock [9] in the performance evaluation of computer networks (see also [10]). With this service discipline, jobs in the queue are served in an egalitarian way. Thus, if there are n jobs in the queue, each job receives the 1/n fraction of the server capacity. The M/G/1-PS queue has been studied in the queuing literature by several authors, see for instance [13, 15, 16], who computed the Laplace transform of the sojourn time of a tagged customer conditioned on the service time. For the specific case of the M/M/1 queue, it is possible to obtain an explicit expression of the sojourn time distribution of an arbitrary customer [3, 12]. In [6]

, an orthogonal structure involving Pollaczek polynomials was introduced to solve the infinite differential system satisfied by the vector composed of the distributions of the sojourn time of a customer conditioned on the number of customers in the system upon arrival. The

M/G/1-PS system has then been further extended to account of permanent customers [2, 8, 17].

From a practical point view, the processor sharing discipline has gained renewed interest in the study of resource sharing in the Internet. As a matter of fact, the PS discipline can be used to model how TCP connections share the bandwidth of a bottleneck in a packet network [11]. More recently, in the context of cloud platforms, the processor sharing can reflect how the capacity of a multi-core platform is shared among several tenants [14].

The knowledge of the distribution of δ

allows us to easily test the accuracy of the following approximation: Since at each departure, all customers have equal chance of leaving the system, because of the memory-less property of the exponential distribution, we can suppose that when a tagged customer enters the queue, this customer is randomly served among those customers served in the residual busy period (i.e., the busy period starting at the arrival epoch of the tagged customer and ending when the queue empties). Under this assumption, we compute the distribution of the number

˜b of customers leaving the system before the tagged customer is randomly picked. Even if this approximation seems to be rough at first glance, numerical results show that ˜b is a reasonable upper bound for δ. The motivation for this approximation is to develop a method of approximating the sojourn time of a batch in an M[X]/M/1-PS queue. While the Laplace transform of the sojourn time of a job has been computed in [7]

when batches are geometrically distributed, results for the sojourn time of an entire batch is much more challenging.

The organization of this paper is as follows: In Section 2

, we introduce the model and the various random variables. In particular, these random variables are related to an absorbed Markov discrete time, whose transition matrix introduces a selfadjoint operator in an ad-hoc Hilbert space. The spectral properties of this operator are studied in Section

is a discrete-time Markov chain with transition matrix

Let us now consider the sub-matrix A of A obtained by deleting the first row and the first column of matrix A. The non-null coefficients of matrix A are given for for n≥0 by

. This matrix is tridiagonal and sub-stochastic, and gives the transition probabilities of the Markov chain

Let en be the column vector with all entries equal to 0 except the n-th one equal to 1. Then, for m≥0,

where ten is the row vector equal to the transpose of the column vector en. The probability that the tagged customer leaves the system at stage k≥1 and leaves m customers in the queue is equal to

Let ν denote the number of customers left in the system by the tagged customer upon service completion. We have

Similarly, if we denote by κ the time at which the tagged customer leaves the system, we have for k≥1

In view of Equation (1), we see that for characterizing the distribution of the various random variables introduced above, we have to compute the resolvent of the infinite matrix A, namely (zI−P)−1 as well as the powers of matrix P. For this purpose, we prove in the next section that this matrix induces a selfadjoint operator in some ad-hoc Hilbert space.

3. Spectral properties of matrix A

We introduce the same real Hilbert space as in [6]. Let

where πn=(n+1)ρn. The Hilbert space H is equipped with the scalar product

The infinite matrix A induces in H an operator that we also denote by A. By using the same arguments as in [6], we can easily prove the following lemma, where we use the norm of the operator A defined by

by definition, the operator A is bounded if ∥A∥<∞.

The operator A is symmetric and bounded in H and hence self-adjoint.

The symmetry of A is straightforward since it is easily checked for every f,g∈H, (Af,g)=(f,Ag) owing to the reversibility property an,n+1πn=an,n−1πn+1 for all n≥0.

For f∈H, we have by Schwarz inequality

The spectrum σ(A) of the operator A is defined by

Let us consider some f∈H such that Af=xf for some real number x. By setting without loss of generality f−1=0 and f0=1, we have for n≥0

It is then easily checked that

In the following, we introduce the vectors Q(x) such that the n-th component is

these polynomials are orthogonal with respect to the weight function supported by the interval [−1,1] and given by

where δm,n is the Kronecker symbol.

The polynomials (Qn(x)) have the generating function

It is worth noting that for real z<1

With the above observations, we state the following lemma.

The operator A has the continuous spectrum [−2√ρ1+ρ,2√ρ1+ρ] and spectral measure dψ(x) defined by Equation (4).

Let us first consider the random variables ν and κ.

By using Equation (1), we have

By using the spectral identity, we have

where (em)x is the projection of the vector em on the vector space spanned by the vector Q(x). By using the orthogonality relation (5), we have

It is worth noting that

By introducing the Laplace transform W⋆n(z) of the random variable Wn, which is the sojourn time of a tagged job entering the M/M/1 PS queue while there are n jobs in service, we have from [6]

as expected. This shows in particular that for all n≥0

By using the above computations, we have the following corollary.

When the tagged job enters an M/M/1-PS queue in the stationary regime, the number ν of jobs left in the system upon service completion of the tagged customer has distribution

The generating function of the random variable κ (i.e., the time at which the tagged customer leaves the system) is given by

where we have used Equation (11) in the last step.

where (Ei) is a sequence of independent and identically distributed exponential random variables with mean 11+ρ. It follows that the Laplace transform of Wn is

By inverting the Laplace transform we eventually obtain

and the number of departures δ under the same condition is such that δd=α (equality in distribution).

Let j≥0 be an integer. We have

and Equation (14) follows by deconditioning on N0.

By using similar arguments, we have

By using Equation (15), we deduce that

To conclude this section, let us study the asymptotic behavior of the common distribution of the random variables α and δ. In the following, we set e=exp(1).

When j tends to infinity, we have

We first note that

where we have used the normalizing condition (3). It follows that if we choose η sufficiently small so that cosη>1+ρ2