In this paper, we investigate the physical-layer security for a spatial modulation (SM) based indoor visible light communication (VLC) system, which includes multiple transmitters, a legitimate receiver, and a passive eavesdropper (Eve). At the transmitters, the SM scheme is employed, i.e., only one transmitter is active at each time instant. To choose the active transmitter, a uniform selection (US) scheme is utilized. Two scenarios are considered: one is with non-negativity and average optical intensity constraints, the other is with non-negativity, average optical intensity and peak optical intensity constraints. Then, lower and upper bounds on the secrecy rate are derived for these two scenarios. Besides, the asymptotic behaviors for the derived secrecy rate bounds at high signal-to-noise ratio (SNR) are analyzed. To further improve the secrecy performance, a channel adaptive selection (CAS) scheme and a greedy selection (GS) scheme are proposed to select the active transmitter. Numerical results show that the lower and upper bounds of the secrecy rate are tight. At high SNR, small asymptotic performance gaps exist between the derived lower and upper bounds. Moreover, the proposed GS scheme has the best performance, followed by the CAS scheme and the US scheme. 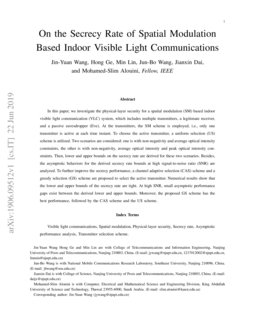 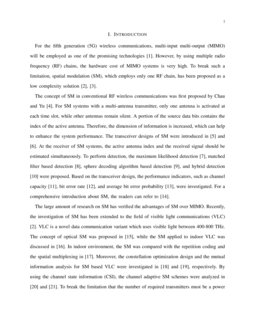 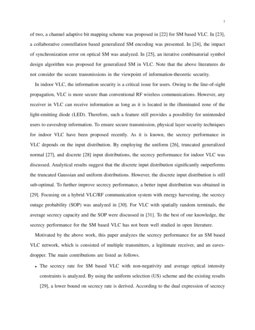 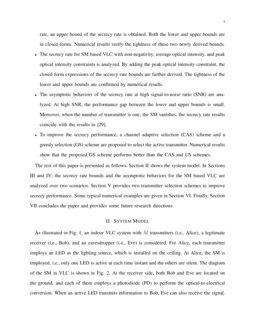 For the fifth generation (5G) wireless communications, multi-input multi-output (MIMO) will be employed as one of the promising technologies [1]. However, by using multiple radio frequency (RF) chains, the hardware cost of MIMO systems is very high. To break such a limitation, spatial modulation (SM), which employs only one RF chain, has been proposed as a low complexity solution [2, 3].

The concept of SM in conventional RF wireless communications was first proposed by Chau and Yu [4]. For SM systems with a multi-antenna transmitter, only one antenna is activated at each time slot, while other antennas remain silent. A portion of the source data bits contains the index of the active antenna. Therefore, the dimension of information is increased, which can help to enhance the system performance. The transceiver designs of SM were introduced in [5] and [6]

. At the receiver of SM systems, the active antenna index and the received signal should be estimated simultaneously. To perform detection, the maximum likelihood detection

[7], matched filter based detection [8], sphere decoding algorithm based detection [9], and hybrid detection [10] were proposed. Based on the transceiver design, the performance indicators, such as channel capacity [11], bit error rate [12]

[13], were investigated. For a comprehensive introduction about SM, the readers can refer to [14].

The large amount of research on SM has verified the advantages of SM over MIMO. Recently, the investigation of SM has been extended to the field of visible light communications (VLC) [2]. VLC is a novel data communication variant which uses visible light between 400-800 THz. The concept of optical SM was proposed in [15], while the SM applied to indoor VLC was discussed in [16]. In indoor environment, the SM was compared with the repetition coding and the spatial multiplexing in [17]. Moreover, the constellation optimization design and the mutual information analysis for SM based VLC were investigated in [18] and [19], respectively. By using the channel state information (CSI), the channel adaptive SM schemes were analyzed in [20] and [21]. To break the limitation that the number of required transmitters must be a power of two, a channel adaptive bit mapping scheme was proposed in [22] for SM based VLC. In [23], a collaborative constellation based generalized SM encoding was presented. In [24], the impact of synchronization error on optical SM was analyzed. In [25], an iterative combinatorial symbol design algorithm was proposed for generalized SM in VLC. Note that the above literatures do not consider the secure transmissions in the viewpoint of information-theoretic security.

In indoor VLC, the information security is a critical issue for users. Owing to the line-of-sight propagation, VLC is more secure than conventional RF wireless communications. However, any receiver in VLC can receive information as long as it is located in the illuminated zone of the light-emitting diode (LED). Therefore, such a feature still provides a possibility for unintended users to eavesdrop information. To ensure secure transmission, physical layer security techniques for indoor VLC have been proposed recently. As it is known, the secrecy performance in VLC depends on the input distribution. By employing the uniform [26], truncated generalized normal [27], and discrete [28]

[29]. Focusing on a hybrid VLC/RF communication system with energy harvesting, the secrecy outage probability (SOP) was analyzed in [30]. For VLC with spatially random terminals, the average secrecy capacity and the SOP were discussed in [31]. To the best of our knowledge, the secrecy performance for the SM based VLC has not been well studied in open literature.

Motivated by the above work, this paper analyzes the secrecy performance for an SM based VLC network, which is consisted of multiple transmitters, a legitimate receiver, and an eavesdropper. The main contributions are listed as follows.

The rest of this paper is presented as follows. Section II shows the system model. In Sections III and IV, the secrecy rate bounds and the asymptotic behaviors for the SM based VLC are analyzed over two scenarios. Section V provides two transmitter selection schemes to improve secrecy performance. Some typical numerical examples are given in Section VI. Finally, Section VII concludes the paper and provides some future research directions.

As illustrated in Fig. 1, an indoor VLC system with M transmitters (i.e., Alice), a legitimate receiver (i.e., Bob), and an eavesdropper (i.e., Eve) is considered. For Alice, each transmitter employs an LED as the lighting source, which is installed on the ceiling. At Alice, the SM is employed, i.e., only one LED is active at each time instant and the others are silent. The diagram of the SM in VLC is shown in Fig. 2. At the receiver side, both Bob and Eve are located on the ground, and each of them employs a photodiode (PD) to perform the optical-to-electrical conversion. When an active LED transmits information to Bob, Eve can also receive the signal.

At the current time instant, we suppose that the m-th LED is activated. Therefore, the received signals at Bob and Eve are given by

are the noise variances.

By using SM, only one LED is activated at each time instant. To choose the active LED, the uniform selection (US) scheme is utilized, i.e., selecting each LED is equi-probable. Therefore, the probability p(hk=hk,m) can be expressed as

In (1), the input signal X is the transmitted optical intensity signal, which satisfies the non-negativity constraint, i.e.,

where E(⋅) is the expectation operator, ξ∈(0,1) denotes the dimming target, and P∈(0,A] represents the nominal optical intensity of each LED.

According to information theory [34], when the main channel is inferior to the eavesdropper’s channel (i.e., hB,m/σB<hE,m/σE), the secrecy rate is zero; otherwise, a positive secrecy rate Rs for SM based VLC with constraints (3) and (5) is derived by solving the following problem

is the probability density function (PDF) of

X, I(⋅;⋅) denotes the mutual information. Note that it is extremely challenging to solve optimization problem (6). Alternatively, tight secrecy rate bounds will be analyzed in the following.

By analyzing optimization problem (6), a lower bound on secrecy rate for SM based VLC with constraints (3) and (5) is obtained in the following theorem.

For the SM based VLC with constraints (3) and (5), the secrecy rate is lower-bounded by

To facilitate the derivation, eq. (1) can be re-formulated as

The conditional mutual information I(X;Y′B,m∣∣Y′E,m) is upper-bounded by

where u denotes a relative entropy, and it is defined as

From Lemma 1, it can be observed that selecting an arbitrary gY′B,m∣∣Y′E,m(y′B,m∣∣Y′E,m) in (9) will result in an upper bound of I(X;Y′B,m∣∣Y′E,m). Therefore, we have

where X∗ and fX∗(x) denote the optimal input and its PDF.

Consequently, we can get an upper bound of the secrecy rate as [26]

By analyzing (14), Theorem 2 is obtained as follows.

For the SM based VLC with constraints (3) and (5), the secrecy rate is upper-bounded by

In a typical indoor VLC scenario, the received SNR is large (generally greater than 30 dB). Therefore, we are more interested in the secrecy rate in the high SNR regime. In this subsection, under constraints (3) and (5), we analyze the asymptotic behaviors of the upper and lower bounds of the secrecy rate when P tends to infinity.

By analyzing Theorem 1, when P→∞, we have

By analyzing Theorem 2, when P→∞, we have

For the SM based VLC under constraints (3) and (5), the asymptotic behavior of the secrecy rate bounds in the high SNR regime is expressed as

In Corollary 3, the asymptotic lower and upper bounds on secrecy rate do not coincide, and their difference is 0.5ln[4e/(π2)]−0.5ln[e/(2π)]≈0.4674 nat/transmission. In other words, the asymptotic performance gap is small.

By adding a peak optical intensity constraint (4), the secrecy rate bounds and the asymptotic behaviors at high SNR for the SM based VLC will be further analyzed.

Note that it is also challenging to obtain a closed-form solution for problem (19). Similarly, tight secrecy rate bounds will be analyzed in the following subsections.

At first, we define the average to peak optical intensity ratio as α=ξP/A. By analyzing problem (19), a lower bound on secrecy rate for SM based VLC with constraints (3), (4) and (5) is obtained in the following theorem.

where c can be obtained by solving the following equation

In subsections IV-A and IV-B, the lower and upper bounds on secrecy rate for the SM based VLC with constraints (3), (4) and (5) are derived. In this subsection, the asymptotic behavior of the secrecy rate when A tends to infinity will be analyzed.

Then, we can get

By analyzing Theorem 4, when A→∞, we have

where b can be derived by

According to (25) and (29), the following corollary is obtained.

In Section II, the US scheme is utilized to select an active transmitter, i.e., the probability of selecting each LED is assumed to be the same. However, such a selection scheme does not perform well in some cases. To improve the secrecy rate, two novel transmitter selection schemes are provided in this section.

In practice, the process of selecting each LED in the CAS scheme is presented in Algorithm 1. Based on the CAS scheme, Theorems 1 and 2 can be updated as Theorem 5.

For the SM based VLC with constraints (3) and (5), by using the CAS scheme in (31), the lower and upper bounds of the secrecy rate are given by

By considering the CAS scheme in (31), Theorems 3 and 4 can be modified as Theorem 6.

In this subsection, the GS scheme is introduced. In this scheme, the LED with the maximum value of hB,m/σB−hE,m/σE is selected at each time instant. Therefore, the probability of selecting the m-th LED is re-expressed as

For this scheme, the process of selecting each LED in the GS scheme is provided in Algorithm 2. By using the GS scheme, Theorems 1 and 2 can be updated as Theorem 7.

For the SM based VLC with constraints (3) and (5), by using the GS scheme in (36), the lower and upper bounds of the secrecy rate are given by