On the Secrecy Performance of SWIPT Receiver Architectures with Multiple Eavesdroppers

Physical layer security (PLS) has been shown to hold promise as a new paradigm for securing wireless links. In contrast with the conventional cryptographic techniques, PLS methods exploit the random fading in wireless channels to provide link security. As the channel dynamics prevent a constant rate of secure communications between the legitimate terminals, the outage probability of the achievable secrecy rate is used as a measure of the secrecy performance. This work investigates the secrecy outage probability of a simultaneous wireless information and power transfer (SWIPT) system, which operates in the presence of multiple eavesdroppers that also have the energy harvesting capability. The loss in secrecy performance due to eavesdropper collusion, i.e., information sharing between the eavesdroppers to decode the secret message, is also analyzed. We derive closed-form expressions for the secrecy outage probability for Nakagami-m fading on the links and imperfect channel estimation at the receivers. Our analysis considers different combinations of the separated and the integrated SWIPT receiver architectures at the receivers. Numerical results are provided to validate our analysis. 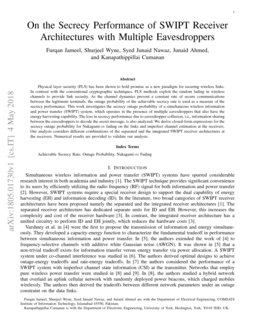 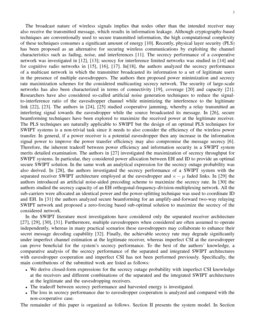 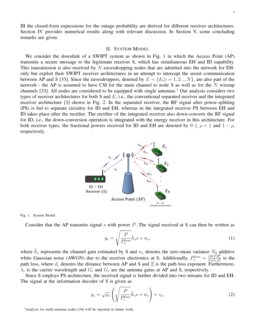 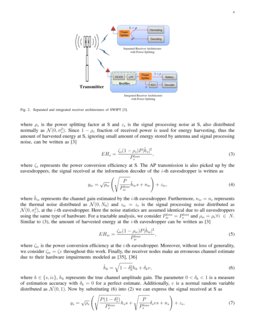 Varshney et al. in [4] were the first to propose the transmission of information and energy simultaneously. They developed a capacity-energy function to characterize the fundamental tradeoff in performance between simultaneous information and power transfer. In [5], the authors extended the work of [4] to frequency-selective channels with additive white Gaussian noise (AWGN). It was shown in [5] that a non-trivial tradeoff exists for information transfer versus energy transfer via power allocation. A SWIPT system under co-channel interference was studied in [6]. The authors derived optimal designs to achieve outage-energy tradeoffs and rate-energy tradeoffs. In [7] the authors considered the performance of a SWIPT system with imperfect channel state information (CSI) at the transmitter. Networks that employ pure wireless power transfer were studied in [8] and [9]. In [8], the authors studied a hybrid network that overlaid an uplink cellular network with randomly deployed power beacons, which charged mobiles wirelessly. The authors then derived the tradeoffs between different network parameters under an outage constraint on the data links.

The broadcast nature of wireless signals implies that nodes other than the intended receiver may also receive the transmitted message, which results in information leakage. Although cryptography-based techniques are conventionally used to secure transmitted information, the high computational complexity of these techniques consumes a significant amount of energy [10]. Recently, physical layer security (PLS) has been proposed as an alternative for securing wireless communications by exploiting the channel characteristics such as fading, noise, and interferences [11]. The secrecy performance of a cooperative network was investigated in [12, 13]; secrecy for interference limited networks was studied in [14] and for cognitive radio networks in [15, 16, 17]. In[18], the authors analyzed the secrecy performance of a multicast network in which the transmitter broadcasted its information to a set of legitimate users in the presence of multiple eavesdroppers. The authors then proposed power minimization and secrecy rate maximization schemes for the considered multicasting secrecy network. The security of large-scale networks has also been characterized in terms of connectivity [19], coverage [20] and capacity [21]. Researchers have also considered so-called artificial noise generation techniques to reduce the signal-to-interference ratio of the eavesdropper channel while minimizing the interference to the legitimate link [22, 23]. The authors in [24, 25] studied cooperative jamming, whereby a relay transmitted an interfering signal towards the eavesdropper while the source broadcasted its message. In [26], secure beamforming techniques have been explored to maximize the received power at the legitimate receiver. The PLS techniques are naturally applicable to SWIPT but the design of an optimal PLS techniques for SWIPT systems is a non-trivial task since it needs to also consider the efficiency of the wireless power transfer. In general, if a power receiver is a potential eavesdropper then any increase in the information signal power to improve the power transfer efficiency may also compromise the message secrecy [6]. Therefore, the inherent tradeoff between power efficiency and information security in a SWIPT system merits detailed examination. The authors in [27] investigated the maximization of secrecy throughput for SWIPT systems. In particular, they considered power allocation between EH and ID to provide an optimal secure SWIPT solution. In the same work an analytical expression for the secrecy outage probability was also derived. In [28], the authors investigated the secrecy performance of a SWIPT system with the separated receiver SWIPT architecture employed at the eavesdropper and κ−μ faded links. In [29] the authors introduced an artificial noise-aided precoding scheme to maximize the secrecy rate. In [30] the authors studied the secrecy capacity of an EH orthogonal-frequency-division-multiplexing network. All the sub-carriers were allocated an identical power and the power-splitting technique was used to coordinate ID and EH. In [31] the authors analyzed secure beamforming for an amplify-and-forward two-way relaying SWIPT network and proposed a zero-forcing based sub-optimal solution to maximize the secrecy of the considered network.

In the SWIPT literature most investigations have considered only the separated receiver architecture [27, 29, 30, 31]. Furthermore, multiple eavesdroppers when considered are often assumed to operate independently, whereas in many practical scenarios these eavesdroppers may collaborate to enhance their secret message decoding capability [32]. Finally, the achievable secrecy rate may degrade significantly under imperfect channel estimation at the legitimate receiver, whereas imperfect CSI at the eavesdropper can prove beneficial for the system’s secrecy performance. To the best of the authors’ knowledge, a comparative analysis of the secrecy performance of the separated and integrated SWIPT architectures with eavesdropper cooperation and imperfect CSI has not been performed previously. Specifically, the main contributions of the submitted work are listed as follows:

The remainder of this paper is organized as follows. Section II presents the system model. In Section III the closed-form expressions for the outage probability are derived for different receiver architectures. Section IV provides numerical results along with relevant discussion. In Section V, some concluding remarks are given.

We consider the downlink of a SWIPT system as shown in Fig. 1 in which the Access Point (AP) transmits a secure message to the legitimate receiver S, which has simultaneous EH and ID capability. This transmission is also received by N eavesdropping nodes that are admitted into the network for EH-only but exploit their SWIPT receiver architectures in an attempt to intercept the secret communication between AP and S [33]. Since the eavesdroppers, denoted by E={Ei|i=1,2,...N}, are also part of the network - the AP is assumed to have CSI for the main channel to node S as well as for the N wiretap channels [33]. All nodes are considered to be equipped with single antennas.111Analysis for multi-antenna nodes [34] will be reported in future work. Our analysis considers two types of receiver architectures for both S and E, i.e., the conventional separated receiver and the integrated receiver architecture [3] shown in Fig. 2. In the separated receiver, the RF signal after power-splitting (PS) is fed to separate circuitry for ID and EH, whereas in the integrated receiver PS between EH and ID takes place after the rectifier. The rectifier of the integrated receiver also down-converts the RF signal for ID, i.e., the down-conversion operation is integrated with the energy receiver in this architecture. For both receiver types, the fractional powers received for ID and EH are denoted by 0≤ρ<1 and 1−ρ, respectively.

Consider that the AP transmits signal s with power P. The signal received at S can then be written as

where ^hs represents the channel gain estimated by S and ns

N0 additive white Gaussian noise (AWGN) due to the receiver electronics at S. Additionally, Plosss=(4π)2dΞsGtGrλ2c is the path loss, where ds denotes the distance between AP and S and Ξ is the path loss exponent. Furthermore, λc is the carrier wavelength and Gt and Gr are the antenna gains at AP and S, respectively.

Since S employs PS architecture, the received signal is further divided into two streams for ID and EH. The signal at the information decoder of S is given as

where ζs represents the power conversion efficiency at S. The AP transmission is also picked up by the eavesdroppers, the signal received at the information decoder of the i-th eavesdropper is written as

where ζie is the power conversion efficiency at the i-th eavesdropper. Moreover, without loss of generality, we consider ζie=ζe throughout this work. Finally, the receiver nodes make an erroneous channel estimate due to their hardware impairments modeled as [35, 36]

where k∈{s,ie}, hk represents the true channel amplitude gain. The parameter 0<δk<1 is a measure of estimation accuracy with δk=0 for a perfect estimate. Additionally, v

is a normal random variable distributed as

Using the above equations, the instantaneous signal-to-noise ratio (SNR) of the main channel can be written as

In this scenario, the worst-case of the eavesdropper with the maximum SNR is considered to decode the message. The instantaneous SNR of the wiretap link can be re-written as

Then, the cumulative distribution function (CDF) for the instantaneous SNR of the wiretap link (i.e. random variable

χe falling below an arbitrary value γe), is given as

Now using statistical independence of the wiretap channels and the CDF of a Gamma random variable [38], we obtain

The corresponding PDF can be written as

The corresponding CDF is given as [37]

where ¯γs=ΩsE{|hs|2} is the average SNR of the main link and ms represents the Nakagami-m fading severity parameter for the main link.

In this case the achievable rate for the main link is Cs=log2(1+χs). On the wiretap link, the integrated receiver’s ID channel can be modeled as a free-space optical intensity channel [3]. The asymptotic high-SNR achievable rate for this channel is expressed as Ce=log2(χe)+12log2e2π, assuming that the signal processing noise dominates the antenna noise [3, 42]. Then using the approach of (17), we obtain

In this case, the main link has an asymptotic achievable rate of Cs=log2(χs)+12log2e2π [3, 42], whereas the achievable rate for the wiretapper is Ce=log2(1+χe). Then using a similar approach to (17) and after some manipulations, the outage probability is given as

In this case the main and wiretap links have asymptotic achievable rates of Cs=log2(χs)+12log2e2π and Ce=log2(χe)+12log2e2π, respectively [3]. Then using the same approach as that for deriving (17), we obtain

For the case of cooperative eavesdropping, the N eavesdroppers share information to form a virtual antenna array for receive beamforming such that a single-input multiple-output (SIMO) channel exists between the AP and the eavesdroppers [19]. The combined message ensures the maximum achievable rate of the wiretap link. In this case the instantaneous SNR of the combined wiretap signal can be written as

The CDF of the sum of independent, identically-distributed Gamma random variables is expressed as [38]

Substituting (26) and (15) into (19), the secrecy outage probability for this case is expressed as

After some simplifications and using [41, (8.352.4)], the secrecy outage probability is expressed as

Substituting (27) and (15) in (21), the secrecy outage probability for this case is expressed as

After some algebraic manipulations, we obtain

Replacing (27) and (15) in (23) and using a similar approach as for the derivation of 32, the secrecy outage probability for this case is expressed as