Sharing resource blocks in NOMA systems provides more opportunity to the internal users to overhear the messages of the other users. Therefore, some sort of secrecy against the internal users in addition to the external eavesdroppers must be provided. In this paper, we investigate the secrecy performance of a two-user NOMA system in existence of the external and internal passive eavesdroppers, where the far user acts as an internal eavesdropper and tries to overhear the message of the near user. Our system consists of a single antenna base station, two legitimate users and an external passive eavesdropper. We present the closed-forms for the ergodic secrecy rates of the users. Moreover, to derive the secrecy outage probability (SOP) of the system, we use Gaussian-Chebyshev quadrature method, which gives an approximation for the SOP. Numerical results show that this approximation is very close to the exact value of the SOP of the system. Finally, we eliminate the external eavesdropper and present the closed-forms for the ergodic rate of the far user, the ergodic secrecy rate of the near user and also the SOP of the system. 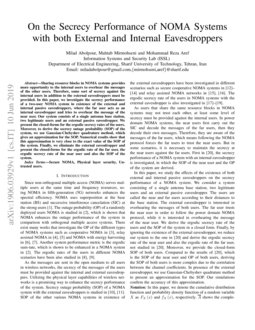 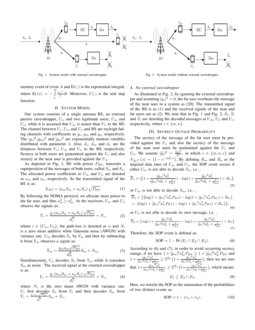 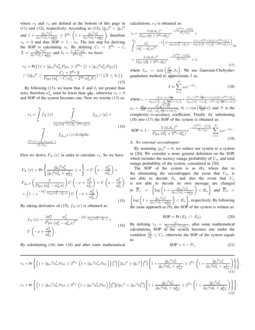 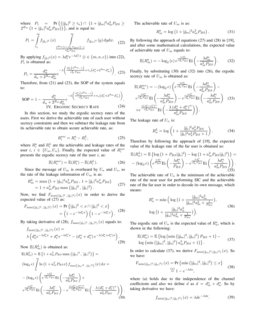 Since non-orthogonal multiple access (NOMA) serves multiple users at the same time and frequency resources, using NOMA in fifth-generation (5G) networks enhances the spectral efficiency. NOMA uses superposition at the base station (BS) and successive interference cancelation (SIC) at the strong users [1]. The outage probability (OP) of a randomly deployed users NOMA is studied in [2], which is shown that NOMA enhances the outage performance of the system in comparison with orthogonal multiple access systems. There exist many works that investigate the OP of the different types of NOMA systems such as cooperative NOMA in [3], relay assisted NOMA in [4, 5] and NOMA with energy harvesting in [6, 7]. Another system performance metric is the ergodic sum-rate, which is shown to be enhanced in a NOMA system in [2]. The ergodic rates of the users in different NOMA scenarios have been also studied in [8, 9].

In this paper, we study the effects of the existence of both external and internal passive eavesdroppers on the secrecy performance of a NOMA system. We consider a system consisting of a single antenna base station, two legitimate users and an external passive eavesdropper. The users are called the near and far users according to their distances to the base station. The external eavesdropper is interested in overhearing the messages of both users. The far user trusts the near user in order to follow the power domain NOMA protocol, while it is interested in overhearing the message of the near user. We derive the ergodic secrecy rate of the users and the SOP of the system in a closed form. Finally, by ignoring the existence of the external eavesdropper, we reduce our system to the one in [20] and derive the ergodic secrecy rate of the near user and also the ergodic rate of the far user, not studied in [20]. Moreover, we provide the closed-form SOP of both users. Compared to the results of [20], which is the SOP of the near user and OP of both users, deriving the SOP of both users is more complex due to the correlation between the channel coefficients. In presence of the external eavesdropper, we use Gaussian-Chebyshev quadrature method to present an approximation for the SOP. Our simulations confirm the accuracy of this approximation. Notation:

In this paper, we denote the cumulative distribution function and probability density function of a random variable

X as FX(x) and fX(x), respectively. ¯¯¯¯A shows the complementary event of event A and Ei(.) is the exponential integral, where Ei(x)=−∞∫xe−ttdt. Moreover, U(.) is the unit step function.

Our system consists of a single antenna BS, an external passive eavesdropper, Ue, and two legitimate users, Um and Un, while it is assumed that Um is nearer than Un to the BS. The channel between Ue, Um and Un and BS are rayleigh fading channels with coefficients as ge, gm and gn, respectively. The |ge|2,|gm|2 and |gn|2 are exponentially random variables distributed with parameter λ. Also, de, dm and dn are the distances between Ue, Um and Un to the BS, respectively. Secrecy at both users are guaranteed against the Ue and also secrecy at the near user is provided against the Un.

As depicted in Fig. 1, BS with power PBS, transmits a superposition of the messages of both users, called Sm and Sn. The allocated power coefficients to Um and Un are denoted as am and an, respectively. So the transmitted signal of the BS is as:

By following the NOMA protocol, we allocate more power to the far user, and thus a2n≥a2m. At the receivers, Um and Un observe the signals as:

where i∈{Um,Un}, the path-loss is denoted as α and Ni

is a zero mean additive white Gaussian noise (AWGN) with variance one.

Um decodes Sn by Ym and then by subtracting it from Ym observes a signal as:

Simultaneously, Un decodes Sn from Yn, while it considers Sm as noise.

The received signal at the external eavesdropper is as:

where Ne is the zero mean AWGN with variance one. Ue first decodes Sn from Ye and then decodes Sm from ^Ye=geam√PBSdα2eSm+Ne.

As illustrated in Fig. 2, by ignoring the external eavesdropper and assuming |ge|2=0, the far user overhears the message of the near user in a system as [20]. The transmitted signal of the BS is as (1) and the received signals of the near and far users are as (2). We note that in Fig. 1 and Fig. 2, ^Si, ˘Si and ˙Si are denoting the decoded messages at Um, Un and Ue, respectively, where i∈{m,n}.

The secrecy of the message of the far user must be provided against the Ue and also the secrecy of the message of the near user must be maintained against the Ue and Un. We assume |~gi|2=|gi|2dαi, in which i∈{m,n,e} and F|~gi|2(x)=(1−e−λdαix). By defining Rm and Rn as the targeted data rates of Um and Un, the SOP event occurs if either Um is not able to decode Sn, i.e. ,

or Un is not able to decode its own message, i.e. ,

Therefore, the SOP event is defined as:

Here, we rewrite the SOP as the summation of the probabilities of two distinct events as:

First we derive FX(x) in order to calculate r3. So we have:

By substituting (16) into (14) and after some mathematical calculations, r3 is obtained as:

where δm=min(a2na2m,δ1). We use Gaussian-Chebyshev quadrature method to approximate I as:

where Rai and RLi are the achievable and leakage rates of the user i, i∈{Um,Un}. Finally, the expected value of Rseci presents the ergodic secrecy rate of the user i, as:

Since the message of Um is overheard by Un and Ue, so the rate of the leakage information of Um is as:

Now E(RLm) is obtained as:

The achievable rate of Um is as:

By following the approach of equations (27) and (28) in [19], and after some mathematical calculations, the expected value of achievable rate of Um equals to:

The leakage rate of Un is:

Therefore by following the approach of [19], the expected value of the leakage rate of the far user is obtained as:

The ergodic rate of Un is the expected value of Ran, which is shown in the following:

where (a) holds due to the independence of the channel coefficients and also we define d as d=dαm+dαn. So by taking derivative we have:

After applying (37) and (39) and some mathematical calculations and following the approach of [19], the ergodic rate of Un is derived as: